A new class of destroyer for the Russian Navy is currently under development by the Krylov State Research Center (KSRC), IHS Jane’s was told during a visit to the company.

The new design is called Project 23560E or Shkval (Squall), KSRC’s deputy director, Valery Polyakov, who added that a scale model of the design is going to be exhibited for the first time during the International Maritime Defence Show 2015 in St Petersburg from 1-5 July.

“The Project 23560E destroyer is intended to conduct operations in off-shore maritime and oceanic zones, to destroy land and naval targets, to provide combat stability to naval forces, to maintain area anti-air and anti-missile defence, and to complete peacetime tasks in all zones of the world’s oceans,” said Polyakov.

The destroyer is intended to be powered by a gas turbine engine (although Russia currently lacks any adequate sources for naval gas turbines). It is proposed to be fitted with a battle management system integrated with tactical and operational-tactical ACSs.

The general design of the destroyer was unveiled last summer at the «Army 2015» defense exhibition. The 200-meter long and 20-meter wide vessel will displace up to 17,500 tons. It will travel at a maximum speed of 32 knots. Overall endurance is up to 90 days. Crew – up to 300 men. It is not yet clear how many of the destroyers will be nuclear or gas turbine powered.

The outline design of the prospective destroyer “Leader” was approved: Here

The Defense Ministry has approved a sketch of the prospective destroyer of Project 23560 “Leader”, said Igor Ponomarev, Vice President of the United Shipbuilding Corporation (USC). 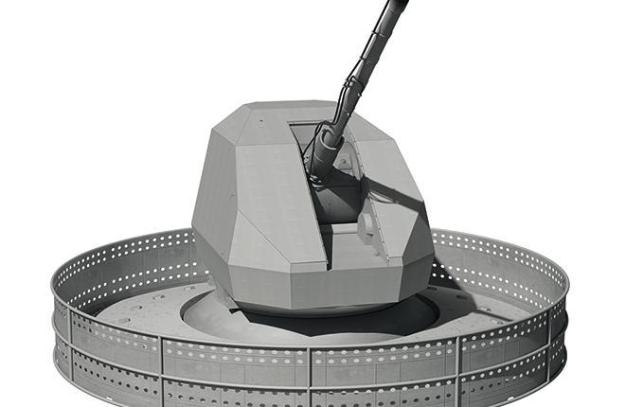 The Puma is capable of detecting targets at ranges up to 60 km. In addition to detection, its computer can simultaneously track four targets and generate data for laying the gun at the two of them. The FCS’ reaction time against an air target is five seconds, against surface or ground one – 10-15 seconds.

To reduce the overall radar signature of the carrier ship, the turret of the A-192 gun mount is made of polygonal panels mating at blunt angles. The turret housing also provides light armoring. The barrel life is 2,500 shots, given all operational rules are observed.

round with  UF-44 HE projectile with  4MRM impact fuze:

– Automation, control and monitoring (Sauk) UE provides synchronization of work feeders shots with the work of artillery machine, control the initial state mechanisms and AC systems before shooting and diagnostics in case of failure during the shooting; – guidance artillery systems, and fire control, select the type of shot carried out remotely, in automatic mode from the radar 5P10 control system or from a remote optoelectronic module (OEM) based on the GOES-140 gyro-stabilized system – used ammunition – unitary ballistic explosive and anti-aircraft missiles (ALS), used in the AK-130 and high-precision artillery shells unconventional kind of firing on shore and surface targets; – AU can be easily adapted to the system of multi-purpose weapons of surface ships with a displacement of 1500 tons or more. The number of personnel during combat service – 3 people. The persistence of the barrel – 2500 shots.

Research Engineering Institute (THEM), belongs to the group “Tehmash”, is developing artillery shells with intelligent, programmable fuses for naval artillery, which will bring the enemy ship down with one shot, he said in July 2015 Head Valeriy Lebedev Institute office. He noted that the use of these shots will significantly increase the effectiveness of firing on marine, coastal and air targets, thus reducing the consumption of ammunition at the goal defeat. “The global trend that we follow – is the creation of intelligent fuses that allow a projectile blasting in optimal time and spatial coordinates, “- said Lebedev. According to him, for example, in contact with such a projectile into the vehicle will first be overcome by the thickness of his body, then carried the projectile blasting with optimal deceleration

RCS coverage area, 60 km to the reaction time, with

transfer time to fire another RCC in the stream, with ≤ 1

ammunition for the installation, shots 22 – 60 (Number of ready to fire ammunition is determined by the capacity of the ship artpogreba) ammunition types

– zenith with PB or DVM;

in the horizontal guidance angle 170 °

The control system 5П-10Э is purposed for control of shipboard artillery gunnery of 30-130mm caliber and unguided rocket weapons of 122-300mm caliber applicable to air, surface and shore targets (including low-flying air-to-ship missile a.k.a. sea-skimmer) in all ranges, by means of ballistic ammunition unitary loading. It also provides circular and sector scanning, auto-acquisition of air, surface and shore targets observed by the radar.

• Automatic simultaneous fire control of multiple shipboard gun mounts, which includes firing of two various calibers to a single or double air, surface and shore targets.
• Automatic target acquisition from shipborne facilities, capture and tracking of up to 4 targets in scanning sector of receiving antenna array.
• Autonomous target detection in circular and sector scanning modes, automatic capture and tracking of four most hazardous targets of all the detected, ranking of targets depending on their level of hazard.
• Output of present coordinates and necessary movement parameters of the tracked targets to target distribution system for the purpose of using other kinds of shipborne fire arms.
• Automatic measurement of zero hits and firing correction, such as using optical-electronic equipment built into antenna station.
• Interception of missile fired from a tracked target.
• RCS capability automatic control with fault indication and troubleshooting output.
• Crew training using simulated targets under simulated interference with shooting ability.

130-mm multi-purpose shipboard artillery system А-192-5П-10Э is purposed for ordnance of surface ships of medium and large tonnage for firing to surface, air (including sea skimmers) and shore targets, as well as for improvement of fire power by means of replacement of 100-mm artillery systems.

• The system provides all-weather capability and simultaneous firing of two gun mounts to two targets under corresponding configuration. Gun mount ammunition ready to automatic firing of 22 shells. Gun mount is equipped with shells auto-feed system from ship hold.
• High-noise immunity of the system is achieved by means of using radar control system with automatic time-space adaptation based on digital processing of coherent radar impulses with variable base and electro-optical channel.
• The system operability is supported by general shipborne target acquisition systems and autonomous targets detection mode.
• Improved attack potential in combat against stream of attacking sea skimmers is achieved due to capability of simultaneous tracking of up to 4 targets, firing data generation on two most hazardous targets and swift fire transfer to the successive targets in the stream. The system is capable of high quality meteoballistic preparation of fire, zero hits measurements and automatic faults correction during firing to air and surface targets. The system includes automatic operability control and troubleshooting system, as well as operation process documentation facilities.

“We have always built such ships – missile cruisers designed for sinking enemy aircraft carriers in particular and enemy submarines as well and able to repel massive air attacks. The Leader being planned for construction now will be a missile cruiser, in fact. The shipbuilders have not come up with an accurate classification for her yet. The press keeps on mentioning a nuclear-powered destroyer or a missile cruiser. Overall, she will be an oceangoing combatant with versatile weaponry. The ship will have the land-attack capability owing to the Kalibr [NATO reporting name: SS-N-30] long-range cruise missile system that we have seen in action in Syria,” the expert reminded. Source navyrecognition.com

The S-400 Triumph also launches 9M96E and 9M96E2 medium range ground-to-air missiles. Designed for direct impact, the missiles can strike fast moving targets such as fighter aircraft with a high hit probability. The maximum range of the 9M96 missile is 120km.

The 9M100 is a short-range surface-to-air missile (SAM) being developed by the Fakel Design Bureau, part of Almaz-Antey concern, for new air defenses that should be in place within Russia by 2015. It is targeted at countering the latest generation of fighter aircraft, helicopters, cruise missiles, guided bombs, supersonic missiles and unmanned aerial vehicles (UAVs) which pose a grave threat to ground forces and key facilities. The highly maneuverable 9M100 missile is being designed for launch by means of a vertical launching system (VLS). As of early 2010 the 9M100 missile system is associated with Vityaz medium-range air defense system and might be the primary weapon for the Morfei short-range air defense system.

The 9M100 guidance system combines an inertial navigation system (INS) with an infrared seeker along with a contact and proximity fuze which ignites the warhead. Such a guidance system means that the 9M100 missile is a fire-and-forget weapon capable of engaging multiple targets simultaneously. The solid propellant rocket motor features thrust vectoring control providing outstanding maneuverability. 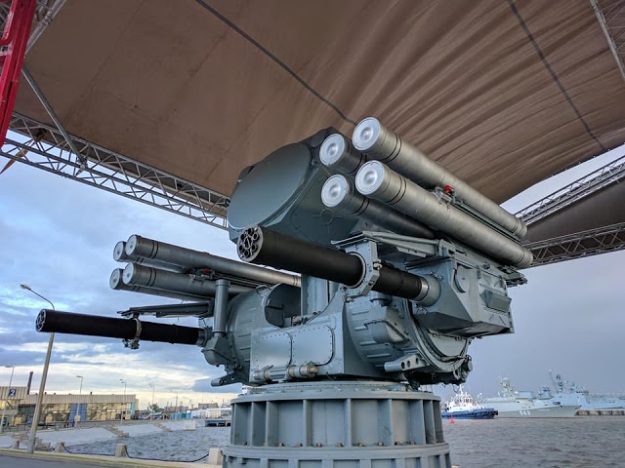 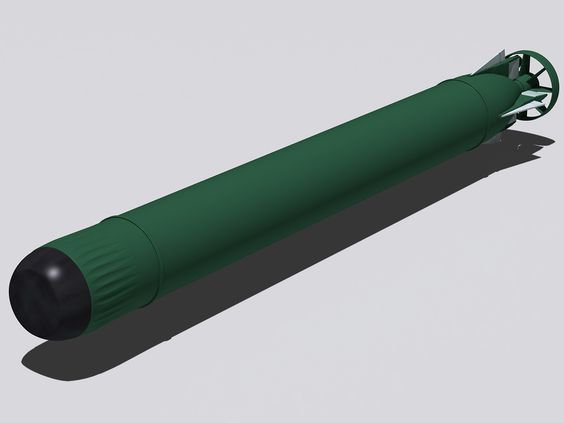 The Paket-E/NK small-sized anti-submarine system with anti-torpedo is designed:

– to destroy torpedoes, attacking the ship (when carrying out anti-torpedo defence tasks)

The complete set of the Paket-E/NK comprises: 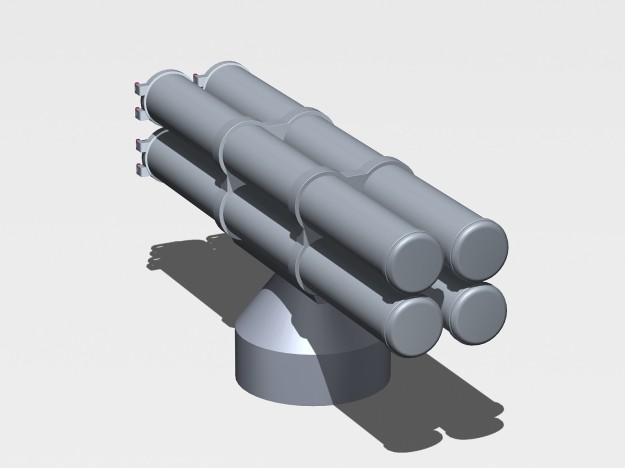 Depending on missions assigned to the surface ship, its launching units can house combat modules armed with different combinations of small-sized heat-seeking torpedoes and/or anti-torpedoes, both in nomenclature and in quantity.

The Paket-E/NK system can operate independently or be integrated into ship’s antisubmarine/anti-torpedo defence system, solving a number of tasks in fully automatic or automated modes, such as:

– generation of target designation data for small-sized heat-seeking torpedoes, based on data, provided by ship’s sonar systems and posts

– detection and classification of attacking torpedoes, determination of their movement parameters, and generation of target designation data for anti-torpedoes

– pre-launch preparation of combat modules, generation and transfer of firing data to them, launching of anti-torpedoes and/or small-sized heat-seeking torpedoes

The Paket-E/NK system is a radically new weapon system, allowing surface ships to solve ASW/anti-torpedo defence tasks with high effectiveness, and to increase substantially their survivability.

The delivery set of the Paket-E/NK small-sized antisubmarine/anti-torpedo system is customer-defined.

An automated testing and trouble-shooting system can be delivered for combat modules operational support. Source ktrv.ru

Main mast – It has a 4 face Poliment 5P-20K multi-function S-band AESA radar which can search and track aerial and surface targets as well as provide guidance to the SAMs similar to “Admiral Gorshkov” pr.22350

The Russian Defense Ministry has approved the initial design of the new Project 23560 Lider-class (Leader) destroyer, which will be equipped with a nuclear reactor to power the vessel, a source in Russia’s defense industry told Sputnik Thursday.

MOSCOW (Sputnik) — The announcement comes after Igor Ponomarev, the United Shipbuilding Corporation (USC) vice president for military shipbuilding told Sputnik that the Russian Defense Ministry approved the initial design for the destroyer, but did not specify which type of reactor the ministry chose.

“The design project implies the presence of a nuclear [reactor] on the perspective destroyer. This project was approved by the Russian Defense Ministry,” the source told Sputnik on Thursday.

The new Lider-class destroyer is planned to have a displacement of 17,500 tonnes, length of 200 meters (over 650 feet) and a width of 20 meters. It will have anti-aircraft, anti-ballistic missile, anti-surface and anti-submarine capabilities.

The Russian Defense Ministry has also specified that the ship would equipped with advanced Grach visual optical interference stations, which are capable of “blinding” enemy troops and optoelectronic devices, such as night vision equipment, binocular glasses and laser ranging devices with bright flares of light.

The Severnoye Design Bureau, the country’s leading company for designing surface ships, has been refining its plans for the construction of the ocean-going Leader-class destroyer since 2010.

The universal battleship is expected to be set up in 2019 and is expected to replace three classes of ships, including project 1155 anti-submarine destroyers. Source sputniknews.com 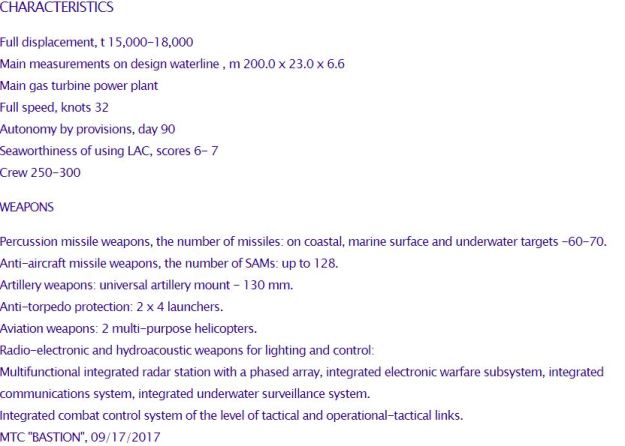