The VBTP-MR Guarani (Portuguese > Viatura Blindada Transporte de Pessoal – Média de Rodas; “Vehicle Armored Personnel Carrier – Medium Wheeled Type”) is a 6×6 armoured personnel carrier developed by Iveco and the Brazilian Army as part of its “URUTU-III” modernisation program aimed to replace all EE-11 Urutu by 2015. The VBTP-MR is based on a 6×6 version of Iveco’s Superav armoured personnel carrier. In the program there’s also the Brazilian Companies IMBEL (Communications), the ELBIT (Armaments), the Usiminas and the Villares (development of national ballistic structural steel).

VBTP with UT30-BR by Elbit Systems with a a Mk44 Bushmaster II cannon and a 7.62mm machine gun; it should also be able fire anti-tank guided missiles.

Standard turret by with (.50 machine gun)

In 1999 the Brazilian Army issued a request (ROB #09/99) for a new family of armored fighting vehicles with amphibious capabilities able to replace the EE-9 Cascavel and EE-11 Urutu developed in the seventies. The main feature of this new family should be its modular design, allowing the incorporation of different turrets, weapons, sensors and communications systems onto the same carriage. The development program also include a communications version, an ambulance version and different fire support versions, armed with large calibre mortar and gun systems. 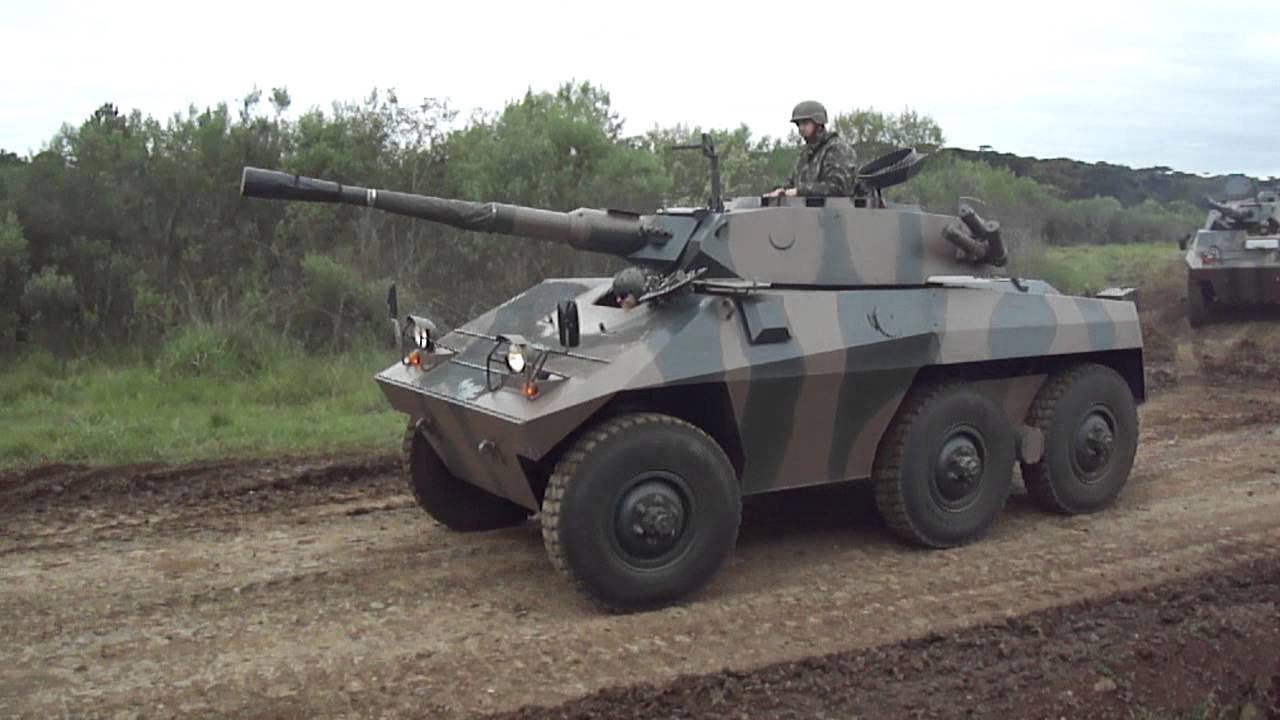 The Brazilian Army has signed with Iveco a contract worth about €2.5 billion for supplying armoured personnel carriers of the VBTP-MR model. The vehicles will replace the old Urutu armoured vehicle employed today by the Brazilian armed forces. The contract covers the delivery of 2,044 vehicles and logistical support for a period of 20 years. Deliveries are expected to begin in 2012, and continue for 18 years.

Currently, the VBTP-MR comes in different variants and versions:

The requirements for the VBTP-MR VBCI included an ELBIT remote control turret, equipped with a Mk44 Bushmaster II cannon and a 7.62mm machine gun; it should also be able fire anti-tank guided missiles. This turret, capable of 360 degree swivel and elevation / depression of -15 to +60 degrees, was chosen by the Brazilian Army on a selection made from among four companies. It is expected to manufactured in Brazil. The firing system has a laser rangefinder, vision and fire control by day/night thermal vision, double shot of command (commander and gunner of the car, with precedence for the later), automatic target tracking system, and hunter killer smoke launchers.

A significant aspect of this vehicle is that the turret is equipped with weapons sights and it is stabilized in two axes, allowing firing on the move with very high probability of hit within the first shot. Future needs will determine what kind of instruments will equip the turret, possibly after the vehicle enters service.

The TORC30 system allows the remote operation of a 30mm Rheinmetall MK30-2 / ABM cannon, mounted on a shielded vehicle, stabilized in direction and elevation with the vehicle in motion, observing and identifying ground and aerial targets with the use of camera and monitor , And aiming and firing the weapon from a remote control station inside the car.

The optimum combination of a high rate of fire and state-of-the-art ammunition technology makes the MK30-2/ABM an uncompromising, highly reliable weapon system. With a maximum effective range of 3,000 metres, the MK30-2/ABM is extremely effective against land, air and sea targets. The MK30-2/ABM is the main armament of the new German Puma infantry fighting vehicle. Source rheinmetall-defence.com

Magazine with a capacity of 500 shots

Detects and accurately locates laser light sources that can pose

Ergonomic with the main accessible commands

Ergonomic with the main accessible commands

Some speculate that that the VBE / CP version will fashion a battle management system. The first level at which information must flow in a bidirectional way, what is known as “situational awareness”, refers to the tactical commander.

The distress (probably the VBCI) and recognition models are planned to have an 8×8 drive train.

The Guarani can be fitted with a variety of remote-controlled weapon stations. It might be fitted with remotely controlled 7.62-mm, 12.7-mm machine guns or 40-mm automatic grenade launcher. One of the variant order by the Brazilian Army will be equipped with an UT30 turet, armed with a 30mm gun and 7.62 mm coaxial machine gun. This remote controlled weapon station is being delivered by Elbit’s Brazilian subsidiary, AEL Sistemas, which received a $260 million framework contract to supply ‘a few hundred’ UT30 turrets for the project.

REMAX is a remote controlled weapon station, fully stabilized, for 12.7 mm and 7.62 mm machine guns, designed under the requirements of the Brazilian Army.

The stabilization of lines of sight and shooting allows a precise shot even in moving conditions of the vehicle and target.

It can be installed on armoured vehicles used in combat, border patrol missions, peacekeeping operations and law and order keeping missions.
The system can be operated remotely by an operator who is inside the vehicle.

According Waldemir Cristino General Romulo, Military Project Manager, there is an interest in exporting the VBTP-MR to other markets, because Brazil has already sold vehicles to Latin America, Africa and Asia-Pacific in the past. The Argentine Army expressed interest in an 8×8 version. Armies also from Chile, Colombia and Ecuador showed interest in the Guarani.

On the 26 November 2009, the Brazilian Defence Minister, Nelson Jobim, announced that President Lula had authorized the start of production for 2044 new vehicles with the new name Guarani, formerly known as Urutu III. According to him the new vehicle would replace the entire mobility system of the Brazilian Army. Also according to the minister, $6 billion would be invested in construction for the Guarani over 20 years. It was predicted that the first vehicle would be ready in 2010 and 16 vehicles would be tested by 2011. From 2012 on, the actual production would begin.

The army commander, General Enzo Martins Peri, signed the contract for the manufacture of vehicles in 18 December 2009. The examinations would be held at Army’s test range (CAEx), located in Barra de Guaratiba, west of Rio de Janeiro state. The tests would examine the vehicle durability, ergonomics and armour in situation such as landmine explosions.

Only on 7 August 2012, the Brazilian Army signed a contract to produce 86 Guarani. The order was completed by December 2012.

In March 2014 the 33rd Motorized Infantry Battalion of the 15th Mechanized Infantry Brigade will receive the first 13 vehicles. It will be the first regular army unit to be issued the new vehicle. It will be part of trials using the initial 86 vehicles to figure out doctrine for its use in service.

The Guarani is motorised with a PFT diesel engine 383hp coupled to a ZF fully automatic transmission, which will give a maximum road speed of 100km/h and an maximum range of about 600km.

Map of VBTP-MR operators in blue

Proposal for a 90 mm cannon

As tensions continue to rise drastically throughout the wider Middle East, Turkey has announced construction plans for a multipurpose aircraft carrier, The Daily Beast reports.

The carrier, named the Anadolu after Turkey’s Anatolia region, will be approximately 740 feet long and is slated to enter service in 2021.

As the carrier is designed for multipurpose missions, it will be able to transport tanks, landing vessels, helicopters, soldiers, and aircraft, according to TDB.

Costing over $1 billion, the carrier will drastically alter Ankara’s ability to project power beyond its borders.

According to The Daily Beast, the Anadolu will technically be either an amphibious transport dock, also known as a landing platform/dock (LPD), or a landing helicopter dock (LHD).

According to the analysis site Bosphorus Naval News, the Anadolu will be able to hold upwards of 10 F-35Bs. Additionally, the carrier could hold upwards of 12 helicopters, 94 battle tanks, and at least 700 troops. The vessel will also feature an onboard hospital that will hold 34 beds.

Such a wide range of features and power will ensure that the Anadolu will become the center piece of a new more internationalist Turkish foreign policy across the region.

“Capabilities offered by the LPD will make it an important instrument of foreign policy that will accentuate Turkey’s soft power beyond its military prowess,” security analyst Metin Gurcan told TDB.

Turkey’s military is already one of the strongest in the region. A NATO member, Turkey has over 400,000 full time frontline personnel.

Amid rising tensions, Turkey is building an aircraft carrier