The Russian Navy will receive the newest Project A223 landing craft. They will be intended for the rapid delivery of troops and equipment onto an unimproved shore both on open water and in shallow ice. Unlike their predecessors, the Project 21820 Dugon-class landing craft, they will be able not only to be loaded ashore, but also to pick up cargoes from amphibious assault ships, writes the newspaper Izvestia.

The landing craft of the project А223 for the Russian Navy 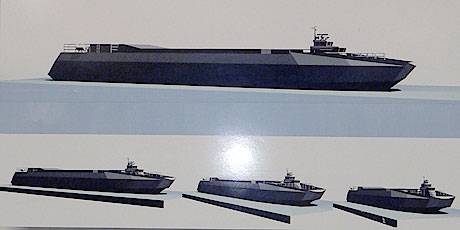 As reports the Internet-the newspaper “Izvestia”, the Russian Navy would consider purchasing landing craft of the project А223 developed at the Zelenodolsk plant.They are designed to transport military personnel and equipment on unequipped coast as in pure water, and in the context of maltobiose ice. Unlike their predecessors, the landing craft of the project 21820 “Dugong” is the ability to boot from large amphibious helicopter — dock ships of the Mistral type, or “Avalanche”.The length of the landing craft А223 is about 35, a width of about 7, the sediment about one meter. The movement of the boat to bring two water-jet engine that can reach speeds of Laden boats of about 40 knots. Depending on the modifications, the ship takes on Board up to 150 Marines or one to three T-90 tanks, or four to seven BTR-82A.Due to hydrodynamic scheme hydroplane with two cross-shaped sponsons, two integrated cheekbones, nose, variable deadrise at amidships and at the transom with a system of managed inception and water-jet propulsion boat project А223 provides a rational combination of speed, seaworthiness (5 points), optimum fuel efficiency and reduced vertical overloads on the wave. Source: weaponews.com

From report above it will be used on the new Lavina “Avalanche”  helicopter carrier: Details

Pantsir-ME is in full-scale production and shall be presented at St.Pete’s IMDS-2017