The KongJing-2000 (KJ-2000) is the first airborne warning and control system (AWACS) in service with the PLA Air Force (PLAAF), with four examples commissioned between 2006~07. 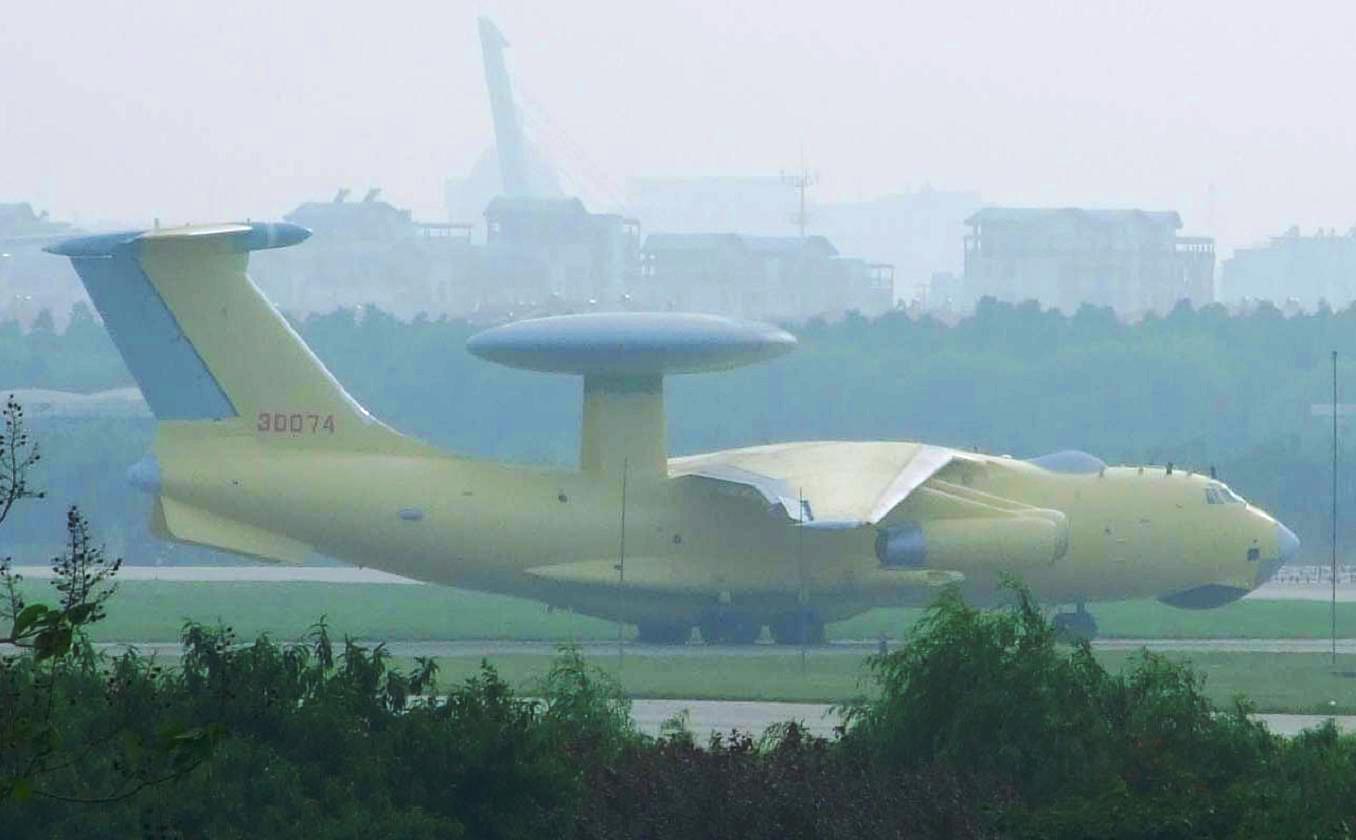 The aircraft was based on the airframe of the Russian-made A-50/IL-76MD, but outfitted with an Chinese indigenous electronically steered phased-array (ESA) radar developed by Nanjing Research Institute of Electronic Technology (also known as 14 Institute). Xi’an Aircraft Corporation (XAC) was responsible for converting existing IL-76MD transport jets for the AWACS role.

The KJ-2000 was a direct result of the failed A-50I Phalcon Programme. China started a three-way talk with Israel and Russia in 1994 for a possible purchase of advanced AWACS aircraft.

Under the proposal, Russia would provide four Beriev A-50 Mainstay airframes, which were to be fitted with the Phalcon airborne early warning (AEW) radar and other C3I system developed by Israeli Aircraft Industries Ltd (IAI). In May 1997, China, Israel, and Russia reached an agreement to supply one such AWACS aircraft under the designation A-50I for $250 million, with the option of three more for a total cost of $1 billion. In October 1999, Russia delivered the first A-50 aircraft to Israel for the installation of the Phalcon AEW radar system.

China salvaged this A-50I prototype from Israel via Russia in 2002 the Phalcon system removed – Image: chinese-military-aviation.blogspot.com

By May 2000, Israel had nearly completed the system installation. However, the Phalcon deal became an increasingly controversial issue between the United States and Israel. In 2000, the Clinton Administration voiced stronger objections to the sale and urged Israel to cancel the sale of the Phalcon, saying it is a system comparable to the U.S. AWACS and could collect intelligence and guide aircraft from 250 miles away. After some intensive talks, the Israeli government finally cancelled the deal with China in July 2000.

The fallout of the Phalcon deal was a major blow for China’s military modernisation programme. China reacted to the setback by starting a domestic programme to develop its own airborne early warning radar and relevant C3I systems. The Israeli-made Phalcon radar and other onboard electronic systems were retrieved from the unfinished A-50I, and the airframe was handed to China via Russia in 2002. Modifications on the airframe began in late 2002 to install the Chinese-made airborne radar system at XAC. A total of four planes were produced, with one based on the A-50I airframe (which can be identified by its nose-mounted aerial refuelling probe), and other three being converted using existing IL-76MD transports in service with the PLAAF. The conversation work was carried out by the XAC.

The AWACS aircraft designated KJ-2000 made its first flight in November 2003. Following some extensive flight testing at China Flight Test Establishment (CFTE) in Yanliang, Shaanxi Province and radar system testing at an airbase near Nanjing, Jiangsu Province, the aircraft entered operational service between 2006~07. A total of four examples (30071, 30072, 30073, and 30074) are being operated by the PLAAF 26th Air Division based in the eastern Zhejiang province near the Taiwan Strait. 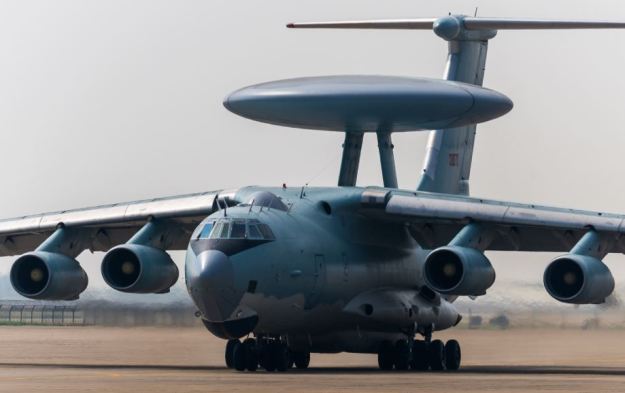 The A-50 airframe, developed and manufactured by the Beriev Aircraft Research and Engineering Complex Joint Stock Company based at Taganrog in the Rostov Region of Russia, was derived from the Ilyushin IL-76 jet transport aircraft, distinguished by the large, non-rotate radome containing the phased-array radar antenna; the solid nose replacing the original ‘glass-in’ nose, and a large number of electronic system antennas on the front section of the fuselage.

The primary radar system housed in the radome is an three-sided electronically steered phased-array (ESA) developed by Nanjing-based 14 institute. Unlike the Russian A-50 or U.S. E-3, which rotate their rotodomes to give a 360 degree coverage, the KJ-2000’s radar antenna does not rotate. Instead, three ESA antenna modules are placed in a triangular configuration inside the round radome to provide a 360 degree coverage.

The Chinese-made radar system could be similar in design to the IAI Phalcon, but may not be as capable as the latter. The Phalcon system could track up to 60~100 targets at the same time and guide a dozen fighters in all-weather, day and night operations. Source airforce-technology.com

Another less frequently discussed consideration is that L-band frequencies typically sit below the design operating frequencies of stealth shaping features in many fighter aircraft and UAV designs. Shaping features such as engine inlet edges, exhaust nozzles, and other details become ineffective at controlled scattering once their size is comparable to that of the impinging radar waves. This problem is exacerbated by the skin effect in resistive and magnetic materials, which at these wavelengths often results in penetration depths incompatible with thin coatings or shallow structures.

It was therefore not surprising that during the 2000/2001 Australian media debate over the Wedgetail AEW&C aircraft, US participants were quick to vocally argue the ‘counter-stealth’ capability of the Wedgetail’s L-band AESA radar design.” Source asiawind.com 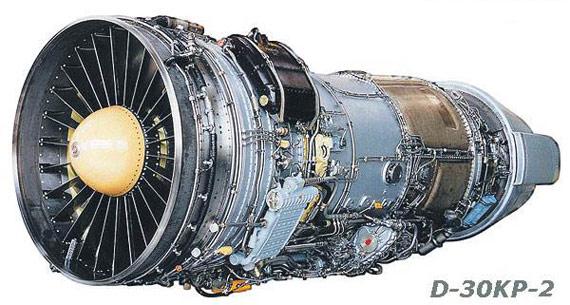 Limited performance parameters of KJ-2000 have been published as follows:

The Taifun-M is a new Russian armored reconnaissance vehicle. It was developed specially for the Russian strategic missile forces. Development commenced in 2007. In Russia the Taifun-M is designated as anti-diversion vehicle. It is a new class of vehicles. The Taifun-M is intended to escort mobile intercontinental ballistic missiles in order to prevent enemy ambushes. It can also protect silo-based ICBM launch sites. This reconnaissance vehicle can spot approaching enemy troops. It entered service with the Russian Army in 2013. First vehicle was delivered during the same year. 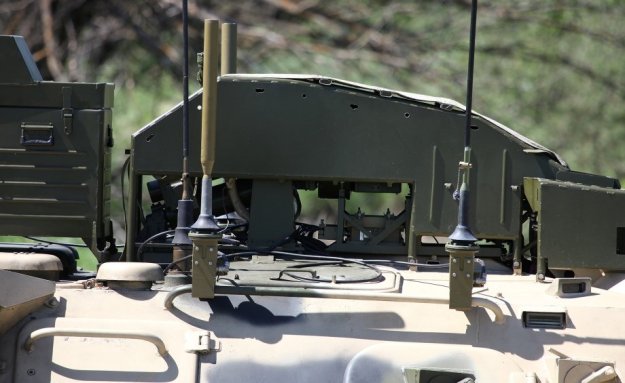 The new vehicle is based on on BTR-82 armored personnel carrier. The original Taifun was under developed since late 1990s. It was planned to be based on the BTR-80 APC. However it never appeared due to prolonged development.

This reconnaissance vehicle is armed only with remotely-controlled 7.62-mm machine gun. There are some firing ports with associated periscopes provided for the crew to fire their individual weapons. 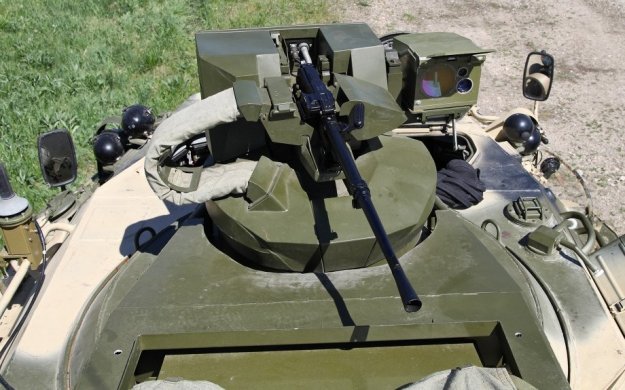 Vehicle is fitted with a mast-mounted radar, FLIR and optical sensors. Some sources report that it can spot enemy vehicles at a range of 6 km and enemy troops at a range of 3 km. Reconnaissance equipment can be controlled by commander or operator.

Vehicle is also fitted with a portable mine detector. Furthermore the Taifun-M is equipped with a system, that suppresses radio-controlled explosive devices.

NR-900 EK designed for detection of mines and explosive device with electronic fuses (activation system) concealed on the ground surface, slightly in the ground (snow), under the road pavement and within various facilities.

Vehicle has a crew of about four men, including commander, driver, gunner and unmanned aerial vehicle operator. It seems that vehicle can carry three more scouts. Soldiers enter and leave the vehicle via side doors or roof hatches.

This reconnaissance vehicle is powered by KamAZ 740.14-300 turbocharged diesel engine, developing 300 hp. It is a commercially available truck engine. Engine is located at the rear.

Vehicle also has auxiliary power unit, which powers all systems and charges the batteries, when the main engine is turned off. Vehicle is fitted with a central tyre inflation system. The Taifun-M is fully amphibious. On water it is propelled by a waterjet. 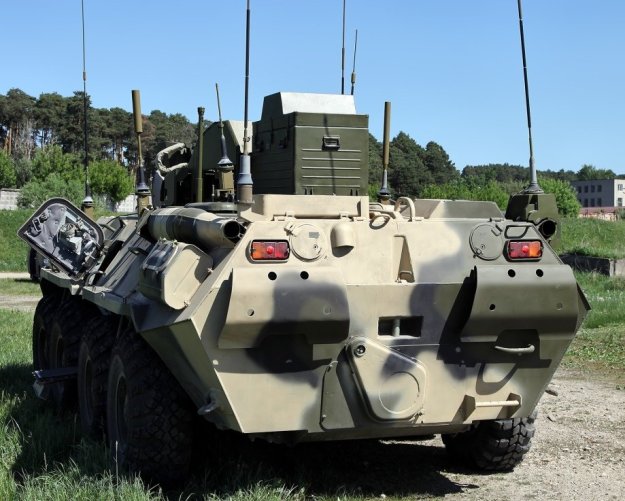