Stridsvagn 121 is the Swedish designation for the Leopard II, of which Sweden received 160 as the first part of an agreement on purchasing the new Leopard Improved (Stridsvagn 122).

The vehicles arrived in Sweden in 1994. The tanks originate form different production series (losung) meaning that there were (and are) a number of external differences between specimen from each series. Among the vehicles shipped to Sweden there are vehicles from losung 1 manufactured in 1979 up to losung 5, which rolled off the assembly line in 1987. (ipmsstockholm.org)

The Leopard 2A4 is armed with a 120 mm smoothbore gun which has been developed by Rheinmetall and fires two types of ammunition, APFSDS-T and HEAT-MP-T.

The APFSDS-T has an effective range of over 2,000 m and the HEAT-MP-T has a high degree of effectiveness against both soft and hard targets. Both fin-stabilised rounds have a semi-combustible cartridge case with a metal base stub which is ejected into a box under the breech. 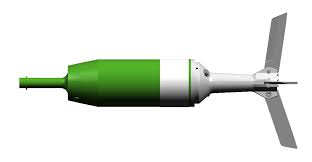 Rheinmetall developed its 120mm x 570 DM11 cartridge on behalf of the German MoD. From the technical standpoint, it is characterised first and foremost by the programmability of the chambered round and by its airburst capability. The necessary system modifications (programmability) can be retrofitted into any modern MBT with a 120mm smoothbore gun. Modular in design, the DM11 consists of warhead with a programmable fuse as well as a ballistic cowl, tailfin assembly, drive band, combustible casing with propelling charge, and a newly designed case base containing the primer and an integrated data cable for programming. The DM11 is designed for engaging lightly armoured targets such as vehicles, antitank positions (whether dug-in or in the open), field fortifications, double reinforced concrete walls as well as earth and timber bunkers . Furthermore, thanks to its high precision and maximum effective range of up to five kilometres, it can be used for penetrating barriers and engaging targets taking cover behind walls, etc., as well as for breeching enemy defences and creating avenues of approach for friendly forces in built-up areas. Source miltechmag.com

Two banks of four 76mm smoke grenade dischargers are mounted to each side of the turret. The Leopard 2A4 is fitted with a computerize fire control which has maximum range of 10,000 m with a measuring accuracy to within 20 m at this range. The combined system allows the Leopard 2A4 to engage moving targets at ranges of up to 5,000 meters whilst itself being on the move over rough terrain with latest modern ammunitions.

The hull of the Leopard 2A4 has spaced multilayer armour and is divided into three compartments:

driver at the front, fighting in the centre and power pack at the rear. Some variants of the Leopard 2A4 are equipped with add-on armour to increase the protection of the crew against mines and improvised explosive devices. The driver is located at the front right side.

The Leopard 2A4 is motorized with an MTU MB 873 diesel engine, which provides 1,103 kW of engine output. The MTU MB 873 diesel engine is a four-stroke, 47.6 liter, 12-cylinder multi-fuel, exhaust turbo-charged, liquid-cooled engine. The Leopard 2A can run at a maximum road speed of 72 km with a maximum cruising range of 550 km. The torsion bars suspension of Leopard 2A4 consists each side of seven dual rubber-tyred roadwheels with the idler at the front, the drive sprocket at the rear and four track-support rollers. The tank is able to negotiate slope up to 60% and side slope to 30%.

Standard equipment on the Leopard 2A4 includes a power pack preheating, crew compartment heater, a fire extinguishing system, electric bilge pumps and an escape hatch in the hull floor behind the driver. The Leopard 2A4 is also equipped with an NBC over pressurization system which provides up to 4 mbar (0.004 kp/cm2) over-pressure inside the vehicle. The Leopard 2A4 can ford a depth water of 4 meters maximum deep using a snorkel or 1.2 meters without any preparation and climb vertical obstacles over 1.1m. 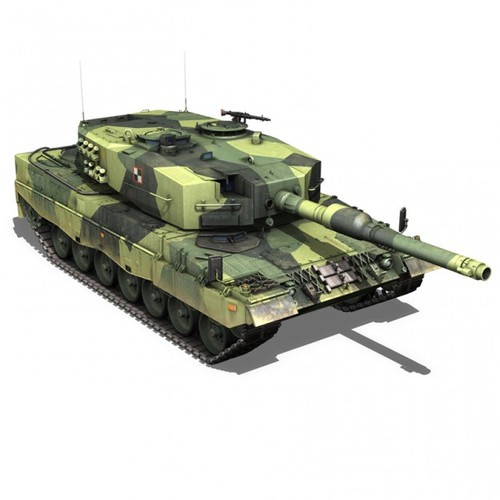 Stridsvagn 122 (Strv 122) (“Battle Tank 122”) is a Swedish main battle tank based on the German Leopard 2. As with the Leopard 2A5 it is based on the German Leopard 2 Improved variant, utilizing newer technology such as command, control, and fire control systems, as well as reinforced armour and long-term combat capacity. Externally, the vehicle can be distinguished from the Leopard 2A5 by the French GALIX smoke dispensers, different storage bins, and the thicker crew hatches. The Strv 122B, have been equipped with modular AMAP composite armour from IBD Deisenroth to give “360° protection” against threats such as EFPs, rocket propelled grenades and improvised explosive devices.

As of 2013, 42 of these tanks remain in active service. Most of the 160 Leopard 2 A4s (local designation Strv 121) that were originally leased are being returned to Germany. The active tanks are divided between three companies, two at P4, Skövde and one at I 19, Boden. The Swedish Defense Materiel Administration (FMV) signed a contract with Krauss-Maffei for the manufacture and delivery of 120 Leopard 2-S officially designated as the Stridsvagn 122 by the Swedish Army. The contract also includes the supply of training, maintenance, spare parts, documentation, simulators, and an option to purchase 90 additional Strv 122, Bueffel ARV as well as interfaces for equipment already used by the Swedish Army. While Krauss-Maffei is the prime contractor, the chassis was sub-contracted to Hägglunds in Sweden. Wegmann, the prime contractor for the turret, sub-contracted the work to Bofors, and work for the fire control system was sub-contracted from STN Atlas Elektronik (formerly Krupp Atlas Elektronik, KAE) to Celsius Tech Systems AB in Sweden. Bofors will also manufacture 50 per cent of the 120 mm main guns, while Rheinmetall will produce the other half.

The Stridsvagn 122 was designed to fight in Swedish conditions including heavily forested areas as well as urban terrain. The designation derives from the 12 cm gun, on the second tank in Swedish service featuring this calibre (the first being Strv 121, Leopard 2A4s fitted with Swedish lights and radios and painted in Swedish camouflage). Strv 122 also had to overcome the perceived flaws of the original German tank, and features the following abilities: The Stridsvagn 122 is the most sophisticated version of the Leopard 2 in current service. The front hull and glacis are fitted with additional armor plates, and the inside of the tank is completely surrounded by liner, to reduce the effects of being hit by projectiles, hollow charges or fragments. For night driving the driver uses the same type of passive night sight used by the CV 90 Infantry Fighting Vehicle. Due to the heavier combat weight of 62,000 kg, compared to the 59,500 kg of the German Leopard 2 A5, stronger torsion bars (derived from the ones used with the Panzerhaubitze 2000) are installed and reinforced brake disks are provided. All fuel tanks have a special additional explosion-supressing filling liquid. The engine compartment is constantly cooled to reduce the IR signature, and heat sensors installed in the engine compartment would automatically cut off fan and air intake operation if the Strv 122 should come under attack by napalm. the roadwheels are fitted with armored wheel hubs.

The turret front and sides have the same wedge-shaped add-on armor as the Leopard 2 A5 but, unlike the latter, the turret roof and the commander’s and loader’s hatches are also up-armored.

Due to the extra weight, both turret hatches were of the electrically-driven sliding type, but this was abandoned because of the problem of opening the hatches if there was a power out. Now the turret hatches are handcrancked with a gear, so its no problem to operate them even if the tank is in a bad angle.

The commander’s periscope has an manually operated protective flap, which would fold up to protect the optic when desired and rests in front of it when not in use. The digital fire control computer carries data for up to 12 different rounds, including APFSDS-T, HEAT-MP-T, HEAT-GP, smoke, anti-helicopter and training ammunition.

As part of a package for computer aided education for mechanics working on the Leopard Tank for the Swedish Army (Datorstцdd Utbildning (DSU) Stridsvagn 122), Calisto provided models, 3D-illustrations and animations of various fixtures and procedures.- Image calisto.se

However, at the time this is being written (August, 2001), only five types of ammunition are being used: 120mm APFSDS-T, 120mm HE-T, 25mm APFSDS-T, 25mm HE, and 120 mm TPFSDS-T. The 25mm is for a barrel insert system, and used for basic training on closer fire ranges. Smoke, HEAT and helicopter rounds are not in use. The helicopter round is under development. The laser rangefinder integrated in the EMES-15 uses the eye-safe Raman-shifted laser. The Strv 122 is the first MBT in Europe equipped with the advanced tank command and control system (TCCS).

On the left and right sides of the turret the GIAT Industries GALIX vehicle protection system with 80 mm calibre mortars is installed, able to launch smoke, decoy, flare and fragmentation rounds. There are 36 grousers (snowgrips), 18 for each track, for use on soft ground instead of the same number of rubber track pads.There are 18 grousers stored on the back of the turret and 18 are stored inside the left turret. The Stridsvagn 122 is painted in a disruptive camouflage scheme of green, light green, and black colours. (ciar.org) 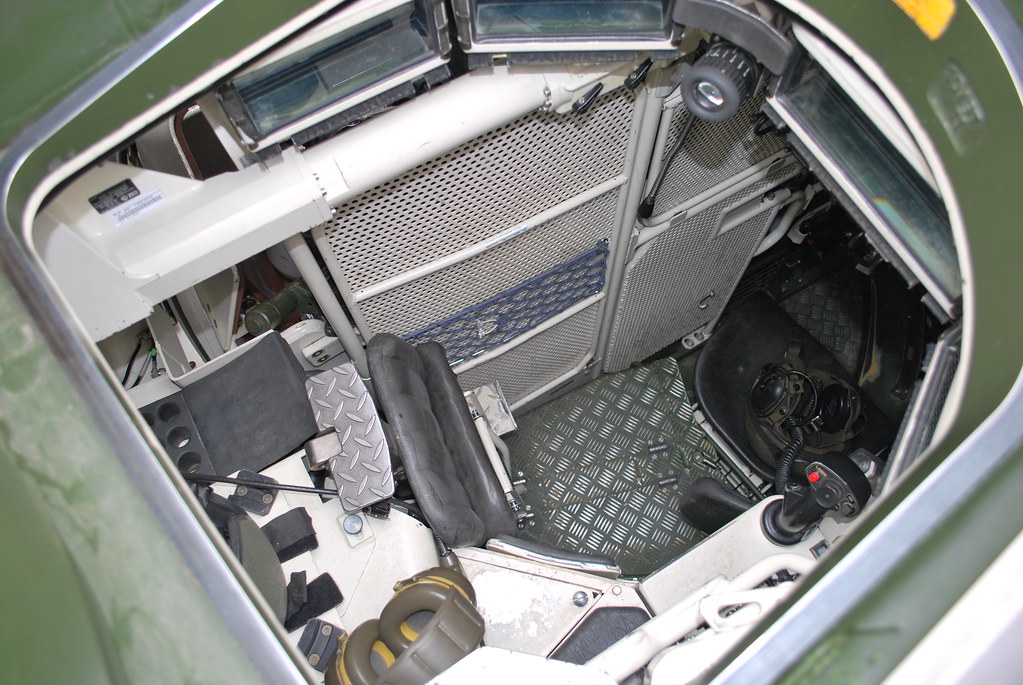 In a recent study program (late 2010) of the tank for the Swedish Defence Material Administration (FMV) in Sweden, IBD Deisenroth Engineering succeeded in the development of a further improved protection dedicated to the tank. The concept is thereby designed to protect against the actual and future threats in theatre, especially in asymmetric and urban warfare. Despite the improved overall protection level of the MBT122 Evolution, the weight increase of about 350 kg is only minimal such maintaining the high mobility of the tank. IBD Deisenroth Engineering announced on 30.05.2012 that the MBT122 protection studies are still ongoing. (blog.daum.net)