The Il-112V aircraft can be used for the transportation and airdropping of military personnel, light weapons and equipment, vehicles, and a variety of cargo. Il-112T, the civilian transport version of Il-112V, is designed for commercial cargo transportation services.

Two Il-112V prototypes, including one for static and fatigue tests and the other for flight tests, will be built initially. Construction and maiden flight of the prototypes is scheduled for completion in 2016. The first production aircraft is expected to be delivered in 2018.

A model aircraft of the Il-112V was exhibited at the Aero India 2015 air show held in Bangalore in February 2015.

JSC Ilyushin Aviation Complex was selected to develop the airlifter in May 2003, but the manufacturing of the first prototype was halted due to design flaws in 2011.

A state contract for the supply of Il-112V production aircraft is expected to be signed in 2015.

The development and production of Il-112V will involve participation of 30 Russian enterprises and more than 50 aircraft component suppliers.

The aircraft will be manufactured by JSC Voronezh Aircraft Manufacturing Company (VASO), while JSC Klimov will supply the engine.

The first footage of the latest IL-112 taxiing https://t.co/NXucTqFwk1 pic.twitter.com/NVLMOEzuzd

Delivery IL-112 tests for military missions will be in 2019: Here

A T-tail configuration, which consists of a vertical stabiliser and a rudder, attaches the fuselage. The retractable tricycle landing gear will include a nose wheel unit and two main wheel units.

The aircraft can be operated from short / unpaved runways and can be automatically land on ICAO category II aerodromes. It can be manually land on poorly equipped aerodromes, or aerodromes without radio technical equipment.

A crew of two personnel can operate the airlifter. It has a maximum take-off weight of up to 20t, and payload capacity of 6t. The cargo cabin is attached with a loading ramp for loading and unloading of cargo, while the cabin is 11.2m long, 2.45m wide, and up to 2.4m high.

The aircraft is designed to carry out both transport and airlift missions under any geographic, climatic, and adverse weather conditions, during day and night.

Modifications :
– IL-112 – the base version of the project. Initially – cargo-passenger aircraft.

– IL-112V (military) – military transport aircraft. The development was started at least in 2004

– Il-112T (transport) – civilian cargo and passenger version of the Il-112V aircraft. The aircraft is designed to carry up to 44 passengers and mail; passengers, mail and cargo (on pallets and in containers); cargo and equipment. Salon is convertible.

– IL-112 – a polar aircraft (with a wheeled-chassis) for the delivery of people, mail and cargo and other tasks. It is possible to create a similar modification of the aircraft.

– Il-112 – patrol aircraft (forest patrol, etc.) for patrolling, servicing the needs of forestry, etc. It is possible to create a similar modification of the aircraft.

– IL-112 is an aerophotographic plane. It is possible to create a similar modification of the aircraft.

– IL-112 – the plane of the hydrometeorological service. It is possible to create a similar modification of the aircraft.

– IL-112 – training airplane. It is possible to create a similar modification of the aircraft.

IL-112 / IL-112T has the ability to perform flights at any time of the year and in simple and difficult weather conditions in all regions, with the option of approaching ICAO category II landing and basing at Class III airfields with a concrete or subterranean runway with soil strength of 6 and more than kg / sq. cm. The aircraft can be operated at aerodromes located at an altitude of up to 2000 m above sea level.

TA14-130-35 is a state-of-the-art gas-turbine engine with the power up to 105 kW. This engine is designed for SU-35 aircraft APU. It is used for supplying on-board AC electric power 200/115 V, up to 30 kV and providing air conditioning for cockpit and cabin.

The engine is equipped with a highly efficient turbo compressor and integrated system of oil cooling. As a result, fuel consumption and the weight are reduced.

The engine is compliant with the contemporary engineering requirements and is equipped with a full-authority electronic digital control system that provides regulation, control and error detection as well as operating time count.

*Note – Could not find the APU model anymore on the wibsite

Engine and performance of Il-112V

The Il-112V will be powered by two Klimov TV7-117S / TV7-117SE modular turboprop engines, which generate a maximum take-off power of 2,800hp each. The engine is 2.14m long and 0.94m in diameter, and weighs 450kg, while the propulsion system consists of two six-bladed propellers.

The most recent version of the engine (TV7-117C) features an enclosed centrifugal wheel that increases its power by 10% while maintaining all the other performance parameters. The Klimov Company holds a patent for the design and manufacturing of such wheels.

The engine has a modular design. Modules can be replaced in the field, which dramatically reduces costs and accelerates repair and maintenance.

The modernized TV7-117SM engine was certified in 2002 (Supplement No. 114D/04 to the type certificate No. 114-D). This version features a state-of-the art full authority digital control system (FADEC). This engine also has superb consumer qualities such as reliability, ease of maintenance and servicing.

These engines hold considerable promise as a component of new regional airliners such as Il-114, Il-112, MiG-110, Tu-136 and others.

Several versions of the TV7-117 are currently under development, including a TV7-117V turboshaft engine for new medium-load helicopters, speed boats and power generators.

Principal specifications of the TV7-117:

Speeds ranging between 550km/h and 580km/h can be attained by the airlifter. It will have a maximum operational range of 6,000km flying at an altitude of 8,100m.

Engine Tests For the Il-112 Have Begun: Here

On September 15, 2016 the United Engine Corporation started testing a new turboprop TV7-117ST engine intended for the prospective Russian light military transport aircraft Il-112V. The product is developed by the team of JSC Klimov, however commercially TV7-117ST will be made in the extended cooperation between enterprises of the UEC where are JSC Salyut Gas Turbine Engineering Research and Production Centre, JSC MMBE named after. V. V. Chernyshev and others included.

Ilyushin’s efforts to resurrect Il-114 production have advanced with the maiden flight of an Il-76 testbed fitted with the turboprop engine intended for the regional type.

Berezhok weapon system is capable to work from static position, drive and afloat. The fire range is 5500 m

30-mm 2A42 gun – The 30 mm 2A42 cannon has a dual feed; one would normally be for HE-T and the other for AP-T rounds, both with a muzzle velocity of 1,000 m/s. The gunner can select one of two rates of full automatic fire, low at 200 to 300 rds/min and high at 500 rds/min. According to the manufacturer, effective range when engaging ground targets such as light armoured vehicles is 1,500 m while soft-skinned targets can be engaged out to 4,000 m. Air targets can be engaged flying at low altitudes of up to 2,000 m at subsonic speeds and up to a slant range of 2,500 m. Source army-guide.com 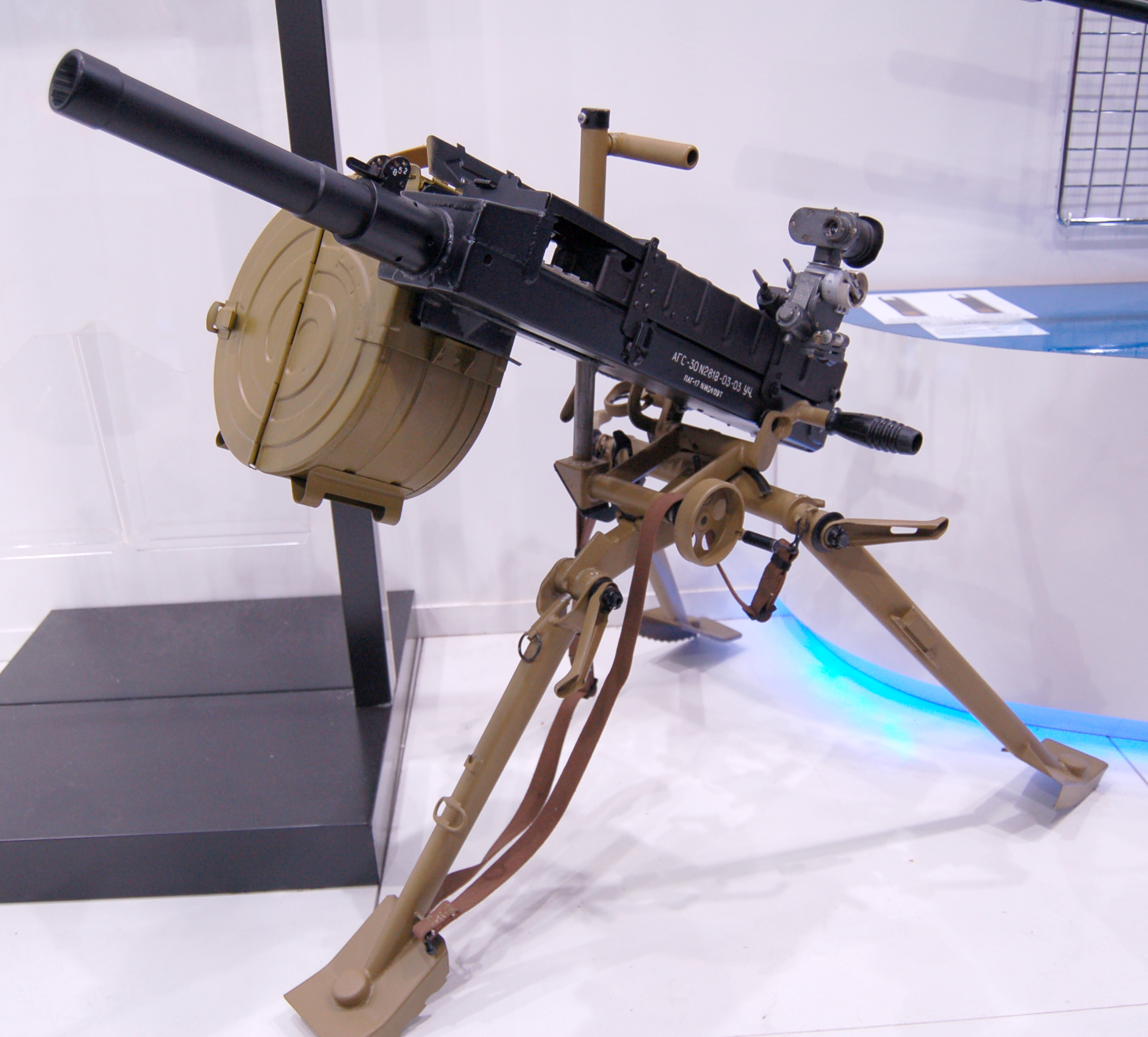 The AGS-30 fires 30 mm VOG-17M, VOG-30, and GPD-30 fragmentation grenades. Ammunition feed is from a 29-round metal bell stored in an ammunition box attached to the right side of the receiver (ammunition belts and boxes are totally standardized with those of the AGS-17 automatic grenade launcher).

The VOG-17M, also known as the 7P9M is an HE-FRAG (High Explosive – Fragmentation) grenade with a nose-mounted VMG-K point detonating impact fuse incorporating a self-destruct mechanism functioning 14 to 19 seconds after firing. The fuse is armed after a distance of 10 to 40 m from the launcher muzzle and is claimed to function even when impacting upon soft surfaces such as snow, swamp and water. Fragmentation is augmented by a number of small steel spheres packed around the main explosive payload of 34 gof RDX/Wax 94/6, producing a casualty radius of 6 to 7 m. The rimless steel cartridge case employed for the VOG-17M is 28.2 mm long. Muzzle velocity is 185 m/s and maximum range 1,730 m.

The new VOG-30 HE-FRAG shell have a lethal radius of 6m and develops a maximum chamber pressure of 1250kg/cm², the fuse arms between 10 and 60m and self-destructs after 27seconds.

The GPD-30 fragmentation round was developed for the AGS-30 by KBP Instrument Design Bureau and extends the firing range to 2,100 m.  Source armyrecognition.com 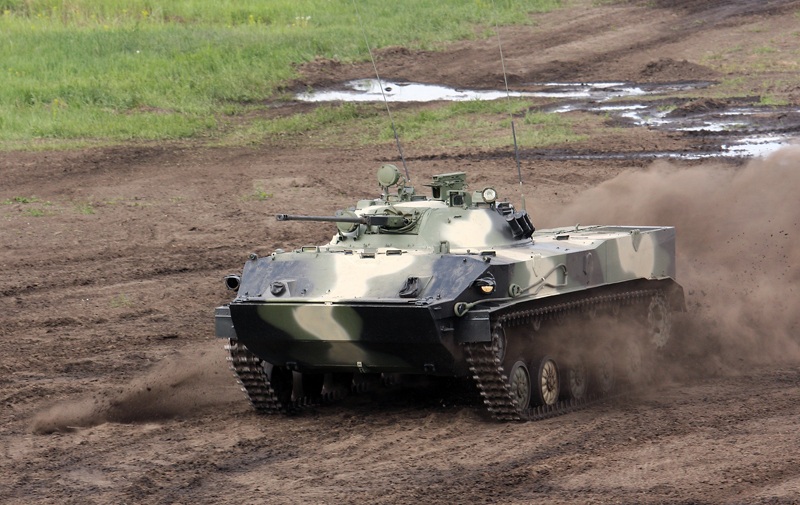 The BMD-3 (Boyevaya Mashina Desanta, Russian “Боевая Машина Десанта”, literally “Combat Vehicle of the Airborne”) is an infantry fighting vehicle (IFV) originating from the former Soviet Union. This armored fighting vehicle is one of the lightest in its class and is intended to be a fire support platform for use by airborne and air assault units. The primary armament is a 30 mm 2A42 autocannon capable of firing different types of ammunition which include high-explosive and armor-piecing. The BMD-3 possesses multiple secondary weapons such as the 9M113 Konkurs missile and the AGS-17 grenade launcher to defeat a wide range of targets from enemy infantry to other armored fighting vehicles.

Designed in the 1980s, the vehicle was manufactured by the Volgograd tractor factory under the industrial index Object 950. The BMD-3 entered service with the VDV in 1990 with only 137 vehicles being produced due to the economic depression. The operators of the BMD-3 are Angola and Russia. As of 2013, 123 BMD-3s and 60 BMD-4s are in service with the Russian Airborne Troops. Source military-today.com