This new version is based on the chassis of BMP-3 infantry fighting vehicle fitted with a new turret armed with a 57mm automatic cannon using gun mount module AU-220M. A 7,62mm coaxial machine gun is mounted to right side of the main armament. A bank of four smoke grenade dischargers is mounted on each side of the turret.

The vehicle is also equipped with latest generation of computerized firing control system to increase the accuracy of the 57mm cannon. It has the capacity to be used against ground and aerial targets as helicopter and drones.

The hull and turret of the BMP-3 ICV are of all-welded aluminium armour construction providing the crew with protection from small arms fire and shell splinters. The turret is in the centre of the vehicle with the commander seated on the right and the gunner on the left.

The vehicle can carry a total of 12 military personnel including driver, gunner and commander. The troop compartment is at the rear of the hull with entry via two doors in the hull rear opening left and right, with the left door having a firing port.

This BMP-3 57mm cannon is motorized with a type UTD-29M 10-cylinder 4-stroke liquid cooled diesel developing 500 hp. The vehicle can run at a maximum road speed of 70 km with a maximum cruising range of 600 km.

The turret is called AU-220. It’s been initially developed as an upgrade to the PT-76 amphibious tank to replace its 76mm main gun and old turret. 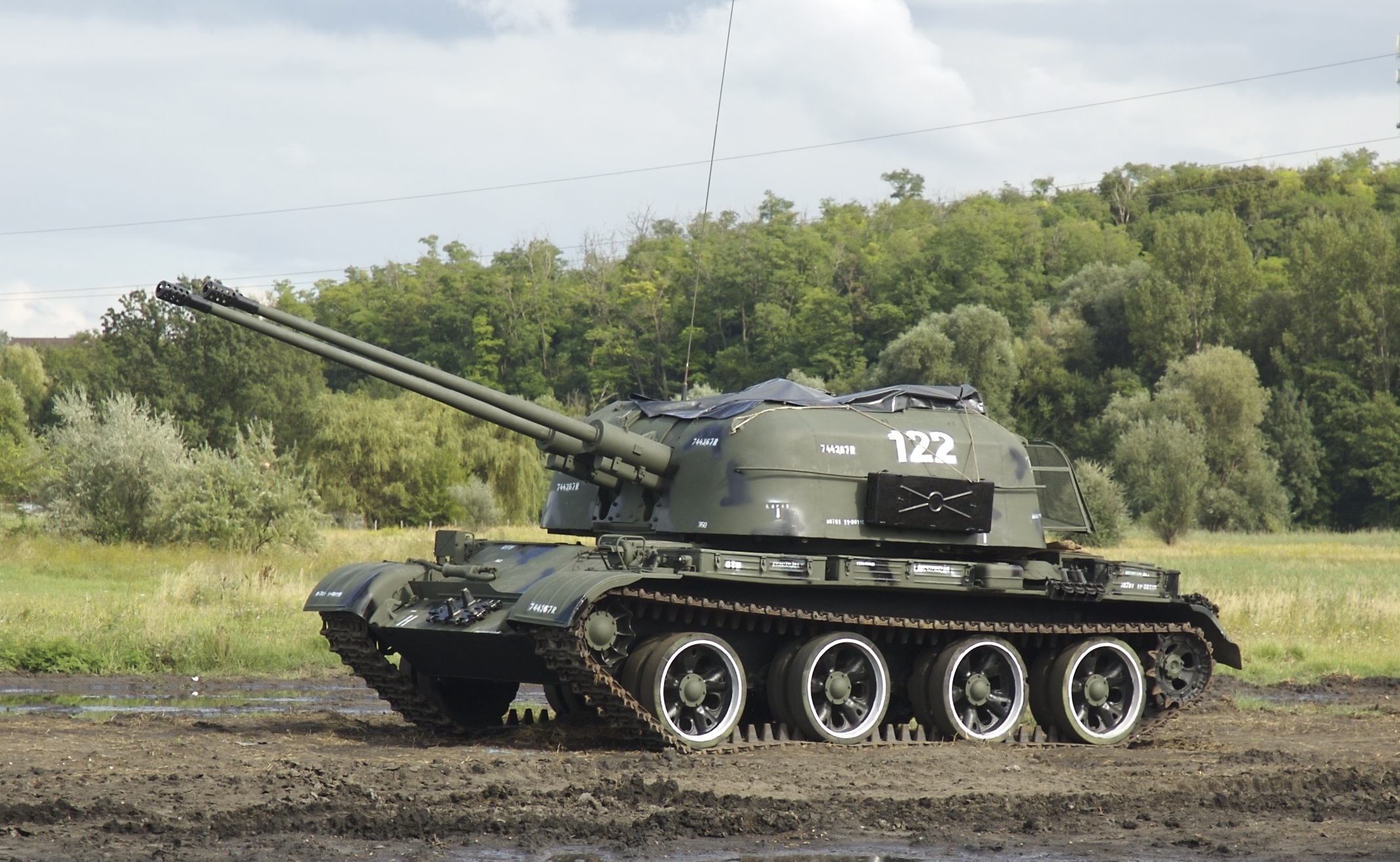 The cannon uses 57x347mm semi-rimmed ammunition. The image below shows the 57mm ammunition vs the Bofors 40×365 ammunition.

The gun is recoil operated. Rate of fire is 105-120 rpm and the muzzle velocity is around 1.020 m/sec. It has a barrel length of around 4.4m.
The effective firing range against ground targets is 4km’s.
The gun has a new automatic loading capable ammunition feed system that houses 20 ready-to-fire rounds as shown below.

The turret basket has a powered 73 round ammunition carousel that provides ammunition to the linkless feeder above.

The 57mm gun with the AP round has a penetration capability of 130mm of Steel at a range of 1.000m. I would expect the penetration would be much better for the huge 57mm caliber.
The 35mm APFSDS round has 120mm penetration at the same range.

Designed for installation in advanced and upgraded armored vehicles to increase the firepower of infantry and mechanized infantry units.

FIRE CONTROL SYSTEM:
Designed to control the process of detection and identification, guidance and fire 57-mm automatic cannon and a 7.62 mm machine gun when firing from the place with the move and afloat in all conditions of combat use.

The front projection – from 30 mm caliber bullet protection (~ 5 level of protection for STANAG 4569).

The Chinese Defense Ministry officially announced that work on the construction of a second aircraft carrier has begun in the port of Dalian.

Earlier, media continuously reported that China was building a second aircraft carrier, but without official confirmation from authorities.

“Everyone knows that the first aircraft carrier, which is at the disposal of the Chinese Navy, is the (aircraft carrier) Liaoning. Relevant departments have considered the subject from all angles and then embarked on the development work of the second carrier. At the moment further design and construction of the aircraft carrier is underway,”

According to him, China adheres to an independent foreign policy of peace and a defensive military strategy.

“We have a long coastline and vast water area located in our jurisdiction. The guarantee of their safety, the protection of sovereignty, territorial waters and the legitimate interests of the country’s seas and oceans is the sacred duty of the armed forces of the China,” he added.

The design draws on experiences from the country’s first aircraft carrier, the Liaoning, which was bought from Ukraine in 1998. It was an unfinished Soviet cruiser Varyag and it was refitted in China.

The ship was named after the province of Liaoning where the docks of the Dalian port were located.

The first sea trials of the Liaoning took place in August 2011, in November 2012 it was announced that a J-15 fighter successfully landed on the deck of the ship.

The Liaoning was built using the hull of a Soviet Kuznetsov-class carrier, the Varyag, with a displacement of 65,000 tonnes, which China acquired from Ukraine in 2002. It is a conventionally powered carrier

Chinese military watchers everywhere have another clear sign that China is building its first indigenous aircraft carrier, the Type 001A “17”

The Type 001A aircraft carrier, “17”, is projected to feature incremental improvements over the original Liaoning, such as a redesigned island superstructure, as well as newer radar, increased automation and greater storage space (some fan art like this CGI, show it with waist catapults to launch heavier aircraft).

Aircraft carrier number “17” is likely to be 65,000 to 70,000 tons in displacement, have forward located ski-jump to launch figthers, and carry about 36-48 aircraft, a combination of J-15 Flying Shark fighters and Z-8/Z-18 helicopters. That’s similar in size to “16” Liaoning, China’s Soviet designed and built aircraft carrier or newer programs like Britain’s HMS Queen Elizabeth class aircraft carrier presently under construction. “17” will feature automation to reduce crew size, increased fuel and ammunition storage, and a smaller island superstructure, making it far more capable than the Liaoning.

Even the land based carrier test mockup in Wuhan is getting a make over for “17”, with modifications to install new radars and communications gear.

If all goes to plan, “17” will be launched in the second half of 2016. At this stage, it would receive its name, most likely the name of a Chinese province or national level municipality. It would likely to be commissioned in 2019, thus doubling China’s aircraft carrier capacity for theaters from the First Island Chain all the away to Africa and Latin America. As the PLAN gains more naval aviation experience from the Liaoning and “17”, its fleet will then move on to more capable future aircraft carriers, like the planned catapult-equipped Type 002 and nuclear power Type 003. Source: Popular Science

Note: Other sources indicate that it would be around 80,000 tons in displacement.

The Ulyanovsk is the first nuclear aircraft carrier that former Soviet Union was building, but it was dismantled due to lack of funds when the Societ Union disintegrated. It has a displacement of 78,000 tons and can carry at least 60 fix-wing fighters and helicopters. What is worth special notice is that it was to use steam catapult according to its design.

The PLA has shown great interest in VTOL fighter jets and may use such fighters on its aircraft carriers.

Judging by the USD300 million cost of a 28,000-ton Type 071 landing platform dock, the cost of a 40,000-ton amphibious attack warship will not exceed USD500 million. It is much cheaper and easier to build and maintain than a nuclear aircraft carrier for use in remote sea areas that costs billions of US dollars.

Source: Qianzhan.com “Exposure of the structural drawings of the aircraft carrier for 40 carrier-based aircrafts that China’s Jiangnan Shipyard is building in Shanghai” summary by Chan Kai Yee based on the report in Chinese

CHINA has declared it is building a nuclear-powered aircraft carrier of a size to rival the biggest in United States naval service in the first move of a major new arms race.

“By that time, China will be able to confront the most advanced US carrier-based fighter jets in high sea,” the Chinese-language article reads.

The news follows rising tensions in the South and East China Seas where the most recent incident involved a near-collision with a US cruiser shadowing China’s first aircraft carrier, the refurbished Liaoning which was purchased from Ukraine.

China’s first homegrown aircraft carrier will be a larger version of Liaoning. The first of two such vessels is due to hit the water in 2015.

The design is reportedly based on drawings from the former Soviet Union of a nuclear-powered, 80,000 ton vessel capable of carrying 60 aircraft.

“Despite their lack of experience, Chinese scientific research personnel have the ambition to overcome various difficulties to master lots of new technologies and techniques in building China’s own powerful aircraft carrier,” the article reads. Source vndata.blogspot.com