The H160M Guepard is a new medium-lift helicopter being developed by Airbus Helicopters for the French Armed Forces, under the Joint Light Helicopter (Hélicoptère Interarmées Léger – HIL) programme.

The helicopter is intended for use by the French Army, Navy, and Air Force to perform multiple missions including commando infiltration, air intercept, fire support, and anti-surface warfare.

Details of the HIL programme

The Airbus H160 was preferred for the HIL programme in 2017 and was originally scheduled to be launched in 2022. The launching of the new helicopter in 2021, ahead of its original schedule, would, however, enable delivery of the first H160Ms to the French Armed Forces from 2026. 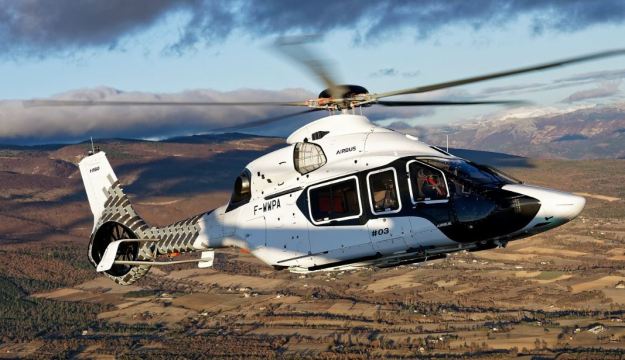 The programme will involve the delivery of a total of 169 helicopters to the three armed forces. The French Army will receive 80 helicopters, while the navy and air force will receive 49 and 40 rotorcraft, respectively.

The H160M helicopter will replace five legacy helicopter types in service with the three military services.

H160M is a military version of the H160 medium-lift utility helicopter, which was first unveiled at the Heli-Expo show held in Orlando, Florida, US, in March 2015. Based on a civil platform, the H160M will ensure simplified maintenance and reduced operating costs than the old-generation of rotorcraft in its class.

The modular design of the H160 also allows for the integration of mission systems to configure the H160M platform for deployment in multiple missions.

The H160M will feature a composite fuselage to achieve weight reductions and fuel savings. It will be equipped with cutting-edge technologies such as Blue Edge five-bladed main rotor, which can reduce the acoustic signature by 50% and increase the lift by 100kg when compared to conventional rotor blades.

The helicopter will also feature a Spheriflex bearingless main rotor hub, which is designed to minimise weight and optimise damage tolerance. Its main rotor will have a diameter of 13.4m. The tail assembly will include a canted Fenestron anti-torque tail rotor. 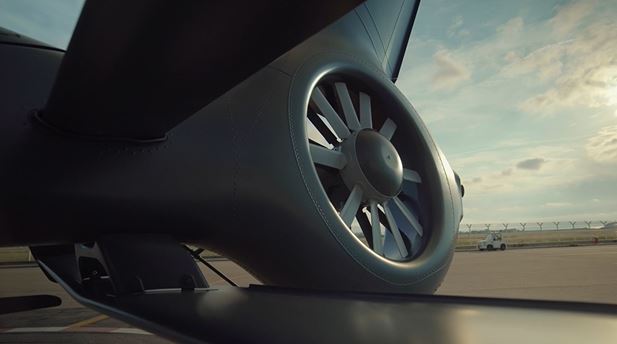 H160M’s undercarriage will feature a tricycle-type landing gear with a nose unit and two main units. The nose wheel will be fitted with twin wheels, while the main units will be installed with a single wheel unit each.

The helicopter can be armed with MBDA’s Sea Venom (ANL) anti-ship missiles (ASMs) to perform anti-ship warfare missions. The over-the-horizon missile can engage targets within the range of 20km.

MBDA is developing Sea Venom/ANL, an helicopter-launched, over-the-horizon anti-ship weapon system, jointly funded by the UK and French Governments. It is the next generation multi-role surface attack weapon.

Capable of defeating the most challenging target set presented by today’s open water and littoral maritime operations, the new weapon features significant advances on both Sea Skua and AS15TT.

The new design will maintain some of the characteristics of Sea Skua and AS15TT and retain compatibility with existing logistic footprints, thereby allowing current users of these systems to upgrade easily.

The spade-gripped FN® M240D is the U.S. standard pintle-mounted medium machine gun for naval, vehicle, and combat aircraft applications. An optional egress kit is available consisting of a buttstock, pistol grip trigger assembly and bipod to enable a vehicle’s crew to instantly convert the M240D for ground combat. The M240D’s cold hammer-forged MIL-SPEC barrel has a hard-chromed bore for longer life and improved accuracy. The receiver is solid machined steel and is equipped with a top-mounted MIL-STD-1913 optical rail. The crossbolt safety and curved trigger help enhance operator control. Includes one spare barrel. 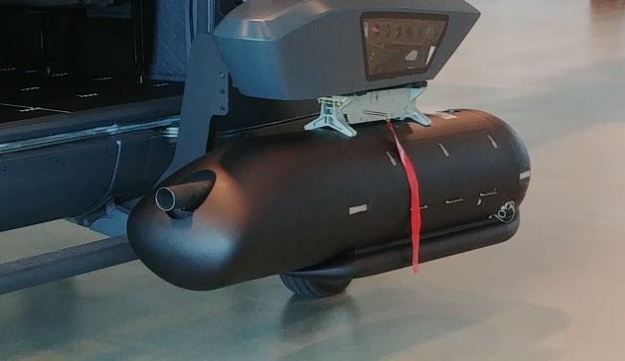 FN has developed a broad spectrum of machine gun pods designed for rotary-wing and subsonic fixed-wing combat aircraft capable of carrying the FN® M3P .50-caliber machine gun and multiple 2.75″ air-to-ground rockets with the FN® RMP variant. FN Pod Systems provide war fighters with a significant firepower advantage in every operational engagement, which is why they are currently in use by a number of NATO nations on both subsonic fixed and rotary-wing combat aircraft. The HMP250 variant is a slightly smaller version of the HMP400, which has a 400 Rd capacity. 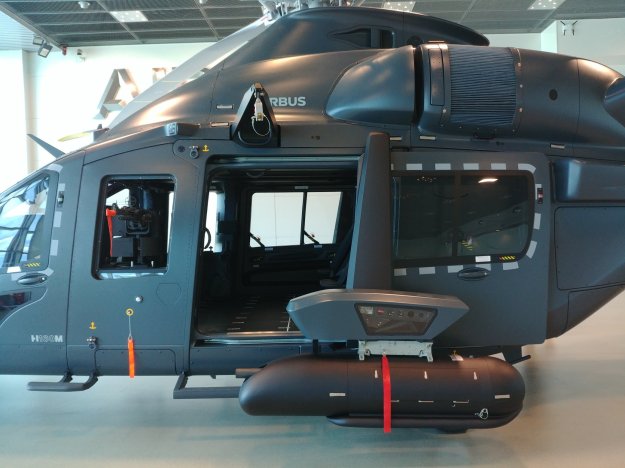 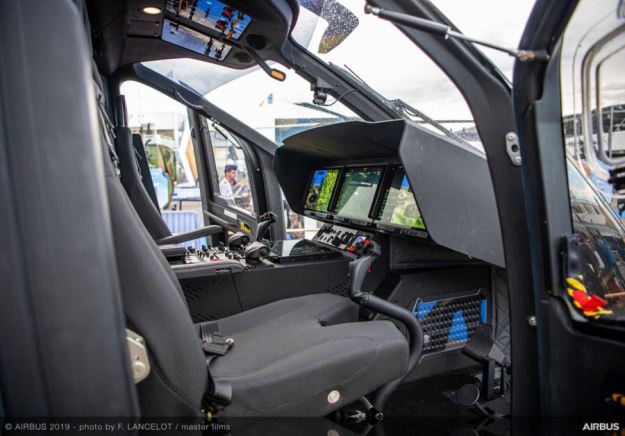 H160M’s cockpit will accommodate up to two crew members. It will be equipped with the Helionix avionics suite, which integrates up to four multi-functional displays. 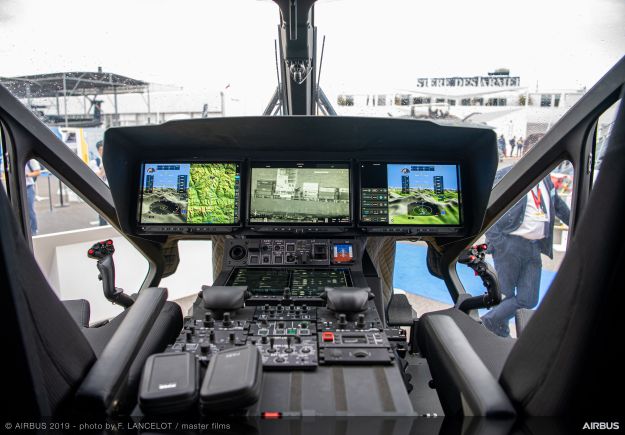 FlytX is based on the Avionics 2020 concept unveiled at the 2013 Paris Air Show and comprises an intuitive touchscreen interface designed by pilots for pilots.

Military helicopters are called on to perform reconnaissance, fire support, surveillance and search-and-rescue missions in increasingly saturated environments. Pilots must be able to observe hostiles, evade obstacles and successfully complete their missions while flying the helicopter and monitoring information from its onboard systems.

Fully mission-oriented, the FlytX solution has been developed to enable maximum efficiency. The technology used in FlytX is designed to reduce pilot workload, so that they can focus on their mission objective at every decisive moment. Source helis.com

The spacious cabin offers an internal volume of more than 7m³ and can house up to 12 armed personnel.

The H160 Guepard will be powered by two Safran Arrano turboshaft engines supplied by Safran Helicopter Engines. The engine will feature a two-stage centrifugal compressor, a reverse-flow combustion chamber, and a single-stage power turbine. It is expected to deliver a maximum power output of 1,300hp.

The power-plant will reduce fuel consumption by 15% when compared to its counterparts and will also increase the payload-range performance of the H160M. The time between overhauls (TBO) of the Safran Arrano engine is 5,000 hours. 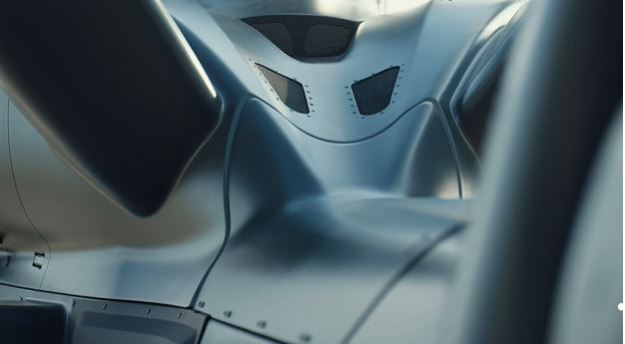 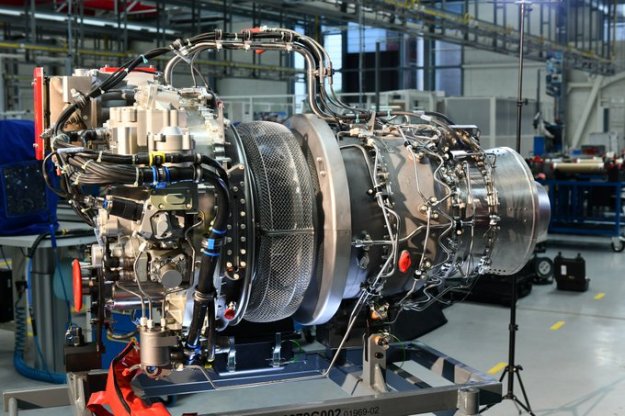 The 1A is the first variant of the Arrano, intended to power Airbus Helicopters’ revolutionary new twin-engine H160. In early 2015, Airbus Helicopters announced its decision to select the Arrano 1A as sole engine on the H160, in part, on its ability to deliver extra power when operating in hot-and-high conditions. The Arrano-powered H160 made its first flight on January 27, 2016. Source safran-helicopter-engines.com 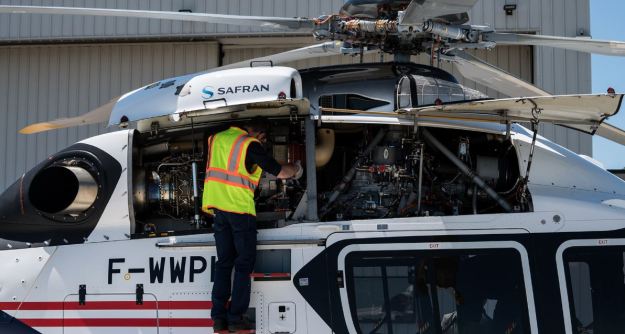