The first-of-class ship, KNM Skjold (P960), was commissioned in April 1999. The Norwegian Government approved the construction of five more Skjold Class vessels in June 2002. Contract negotiations were concluded in July 2003. The series of ships were constructed at the Umoe Mandal shipyard.

In September 2002, Skjold completed a 13-month deployment in the US, allowing the US Navy to study the Skjold Class concept. The ship participated in a series of naval exercises and a number of tests with US Navy research establishments NAVSEA and the Office of Naval Research.

This was the result of a bilateral agreement in which the US Navy reviewed the Skjold capabilities and performance as part of their transformational activities, including littoral combat ship (LCS) development.

In September 2003, Skjold was temporarily decommissioned and returned to the Mandal shipyard for the upgrading of its propulsion system. The vessel began sea trials in November 2006, prior to recommissioning in mid-2008. Skjold has been redesignated as a trials platform.

An important capability of the Skjold is its covert operational capability in littoral warfare, particularly in using Norway’s coastal topography with its islands and fjords, to carry out surveillance and engage hostile forces from a close distance while remaining undetected.

The shallow draught of 0.9m to 2.3m allows the ship to access very shallow waters denied to other vessels. 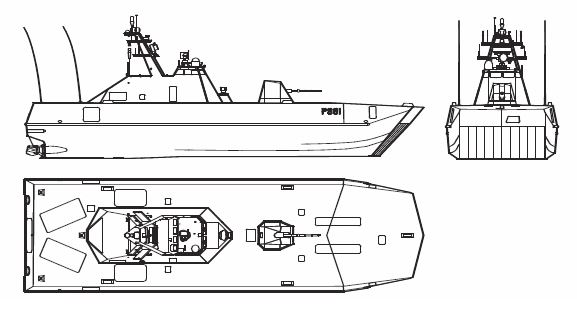 The ACC is based on a catamaran hull with an air cushion between the hulls, which has been successfully proven with the Norwegian Oksoy Class minehunters and minesweepers, which entered service in 1994. The low area of wetted surface of the hulls gives an improved level of shock resistance and significantly reduced wave resistance, compared to that of a conventional displaced or semi-displaced hull configuration. 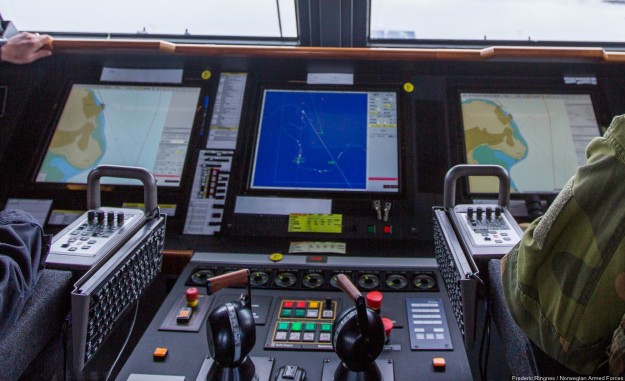 VT Maritime Dynamics provides the vessel’s stabilization systems, including a ride control system which monitors and regulates the pressure of the air cushion by controlling vent valves and a stern fan system that controls the stern seal pressure. The elevated position of the magnetic components reduces the magnetic signature. 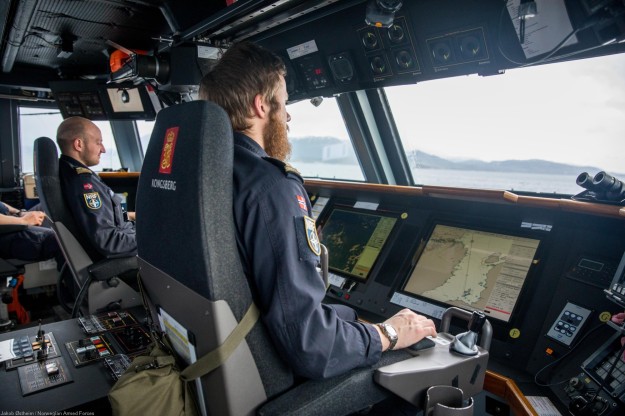 “In September 2002, Skjold completed a 13-month deployment in the US, allowing the US Navy to study the Skjold Class concept.”

The combination of the twin hull and water jet propulsion provides very high and very responsive maneuverability. Vital systems have been duplicated for enhanced survivability and the ship remains operational with one engine room set lost.

The low draught of 0.9m on cushion gives an advantage of access to shallow coastal waters and lower vulnerability to impact against surface or tethered mines or other debris. 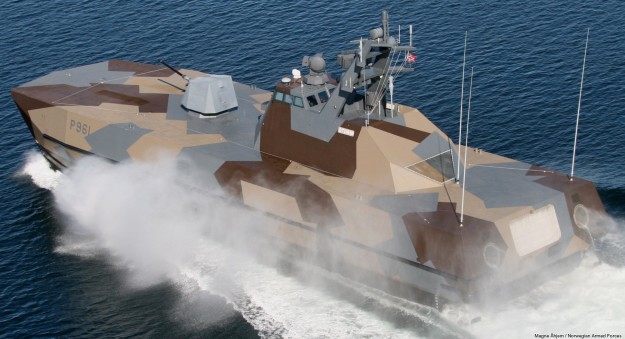 The hull is of composite construction. The hulls are laminated inside and outside with fibre-reinforced plastic composed of glass fibre and carbon laminates bound with vinyl ester and polyester resin. A scrimp manufacturing process is used in construction, involving vacuum-assisted resin injection.

Carbon fibre and carbon-loaded materials have been selected for the beams, mast and supporting structures, which need high tensile strength, for example the support structures for the gun and the electro-optical and radar weapon director.

Radar-absorbent materials have been used in the load-bearing structures across large areas of the ship. This strategy leads to significant weight saving compared to conventional construction techniques of applying RAM cladding to the external surfaces. 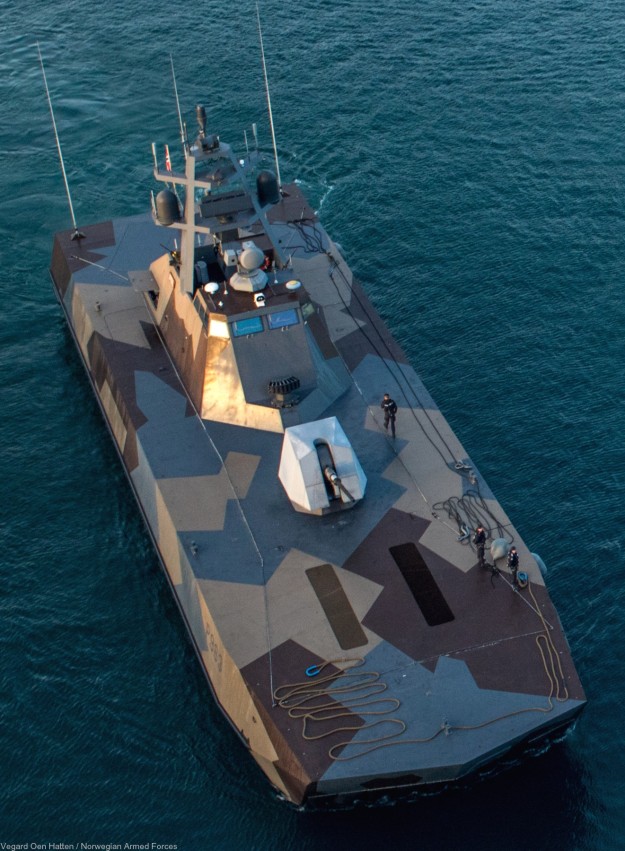 The ship’s profile has a faceted appearance with no right-angle structures and few orientations of reflective panels.

Doors and hatches are flush with the surfaces and the windows are flush without visible coaming (edge of window aperture) and are fitted with radar-reflective screens.

The command and control system for the six Skjold Class vessels is the lightweight Senit 2000 combat management system, jointly developed by DCNS and Kongsberg Defence and Aerospace.

The system has also been selected for the modernisation of the Royal Norwegian Navy’s Hauk Class fast patrol boats.

The Senit 2000 combat management system uses operating modes for littoral warfare and is interoperable with tactical datalinks 11 and 16, to be supplied by Aeromaritime. Senit 2000 gives fast response to pop-up air threats, such as helicopters or other aircraft that suddenly emerge from cover.

The ship is armed with eight Kongsberg NSM (Nye Sjoemaals Missiler, or Norwegian strike missile) anti-ship missiles, which have been developed for the Skjold Class ships and for the Fritjof Nansen frigates.

The NSM missile is equipped with GPS midcourse and a dual-band imaging infrared seeker guidance and has a range in excess of 150km. NSM entered serial production in June 2007.

The ship’s short-range surface-to-air missile is the infrared-guided MBDA Mistral in a portable configuration. A twin launcher will be deployed on the deck or on a land site. The missile is armed with a three kilogram warhead and has a target range of four kilometres. 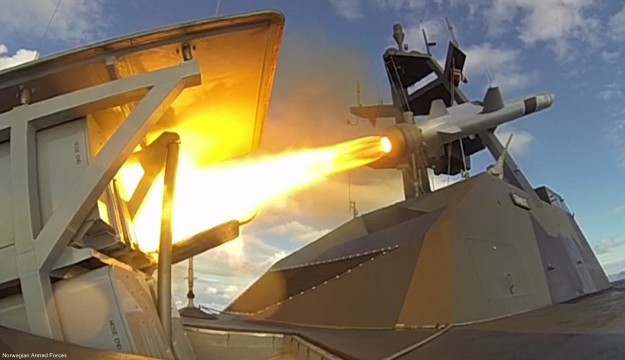 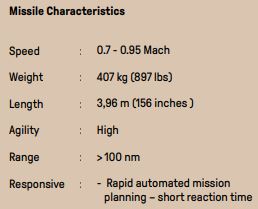 The NSM is a very flexible system, which can be launched from a variety of platforms against a variety of targets on sea and land.

The airframe design and the high thrust to weight ratio give the NSM extremely good manoeuvrability. The missile is completely passive, has proven its excellent sea-skimming capabilities and with its advanced terminal manoeuvres, it will survive the enemy air defences. The Autonomous Target Recognition (ATR) of the seeker ensures that the correct target is detected, recognized and hit, at sea or on land. Source kongsberg.com

The ship’s gun, for deployment against aircraft and other vessels, is the Oto Melara 76mm Super Rapid. The gun has a burst-firing rate of 120rpm, firing six kilograms shells to a range of 16km. 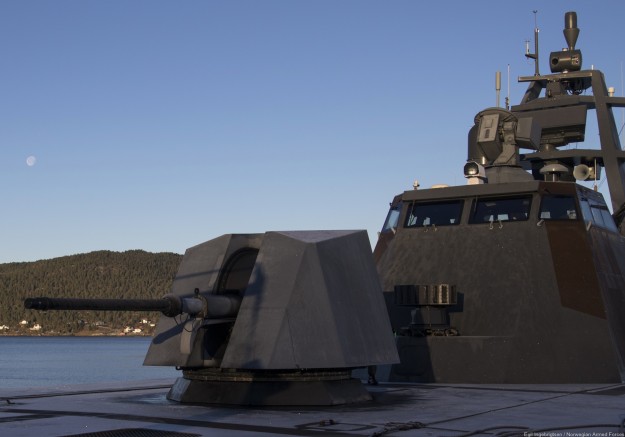 Capability for very effective engagement of shore based targets is also provided for unique multi-role performance.

The 76/62 SR is suitable for installation on ships of any type and class, including small naval units.

Interface to a large variety of ship’s Combat Management System and/or FCS/EOS is provided, according to digital as well as analogical standard, including open architecture.
The Firing rate can be selected from single shot to firing 120 rds/min.

In operational condition the tactical time is less than 3 seconds and the standard deviation at firing is less than 0.3 mrad, thus providing excellent accuracy.

The 76/62 SR (together with the 76/62 Compact) is the only medium caliber naval gun available in the capable of sustained fire, which is a fundamental requirement in any scenario involving the simultaneous engagement of multiple manoeuvring target, as requested by the emerging asymmetric warfare scenarios.

Automatic loading is provided through a revolving magazine and rapid reloading is easily undertaken even during firing action by two ammunition handlers.

Standard supply includes the new Digital Control Console (DCC) capitalizing the digital technology to increase the functions available to the operator and to the maintainers.
The 76/62 SR is ready for operating the 3AP Multifunction Programmable Fuse. Source leonardocompany.com 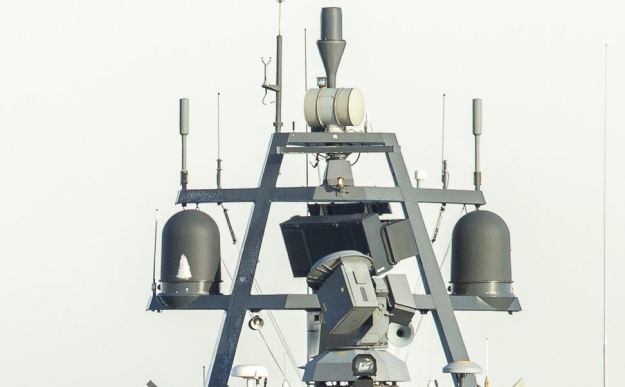 Saab’s CEROS (Celsius Tech Radar and Optronic Site) 200 is a ship-based search and tracking radar system capable of engaging targets above supersonic speeds. The CEROS employs a variety of sensors such as infrared, electrooptical, televisual, and laser. According to a publication by Saab, CEROS is able to detect sea-skimming missiles via its patented CHASE algorithm.[i] Saab explains that this algorithm mitigates the effect of multiparty wave interference, which is when signals are sent to a receiver by multiple sources.[ii] For example, a missile may emit a signal to a receiver, which then sends it to command and control at the same time that a signal directly from the missile reaches command and control. In this instant, the two signals would arrive with different phase shifts — think: a sine wave placed in front of another, so that there’s no exact overlap. This can result in the ghosting effect sometimes observed on television in which images appear to have a shadow duplicate on them.

EOS 500 is capable of tracking all types of threats including sea-skimming missiles. Saab’s advanced video tracker uses simultaneous input from the TV and the IR camera in a data fusion process. The system provides automatic detection of up to four concurrent targets, thus enabling the operator to easily acquire and change targets swiftly. It uses high accuracy 3D tracking.

EOS 500 can be offered as a part of a 9LV combat system solution, or can be combined with components such as Ceros 200 radar, Electro-Optical (EO) tracking systems, gun fire control and missile control modules to form a weapon control system. Such a setup enables operators to dynamically allocate any combination of tracker and weapon for flexible handling of surrounding threats or use them as stand-alone systems. Source saab.com

Thales Naval France had been awarded the contract for the MRR-3D-NG G-band multirole radar and associated IFF systems.

The MRR-3D-NG radar has a lightweight phased array antenna and operates as both surveillance radar and a self-defence system sensor, with automatic mode switching.

The automatic decoy system MASS provides a unique level of protection against modern sensor-guided missiles. MASS can be installed on ships of all types and can be integrated into existing command systems. The new MASS_ISS features built-in sensors for detecting radar and laser threats. Programmable and omni-spectral, the system’s innovative ammunition provides protection in all relevant wavelengths of the electromagnetic spectrum. Source rheinmetall-defence.com

The main propulsion is by waterjet, which offers very shallow draught and extraordinary maneuvering capabilities.

The waterjets are normally driven by gas turbines but may also be driven by small diesel engines in order to reduce infrared signature. The waterjet nozzles can be moved independently to maneuver the Skjold sideways without side propellers or bow propellers. The Skjold retains its ability to turn through very sharp angles, even at high speeds. 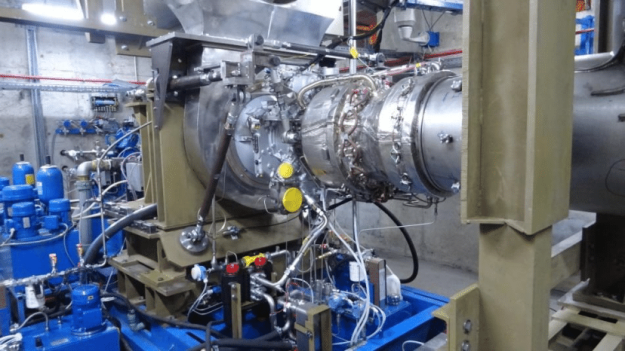 Two MTU 12V TE92 lift fan engines, rated at 735kW, drive the air into the air cushion between the hulls.