The Scorpion Intelligence, Surveillance and Reconnaissance (ISR) / Strike aircraft is being developed by Textron AirLand, a joint venture between Textron and AirLand Enterprises.

The development of the Scorpion aircraft was commenced in January 2012, with the objective of producing the most economical jet-powered light attack aircraft in the world.

Conducted from McConnell AFB in Kansas on 22 December, the 1h 42min first flight “verified the avionics and aerodynamic performance, as well as a number of aircraft systems”, the Textron company says. Registered as N530TX, the jet “performed extremely well”, it adds.

Design improvements introduced with the new aircraft include a simplified landing gear, enhanced aft horizontal stabiliser and an additional 4˚ of sweep to its wing.

Changes to the production-conforming Scorpion included 4 degrees of sweep to the wings, an enhanced aft horizontal stabilizer and a simplified landing gear design.

Officials from Textron AirLand, a unit of Textron Inc., said during the test flight that they verified the Scorpion’s newly configured Garmin G3000 avionics and aerodynamic performance as well as a number of other aircraft systems.

Now, the revamped twin-engine, multimission jet will undergo an assessment by the Air Force Airworthiness Office.

The Air Force is considering whether to press forward with a demonstration of inexpensive, off-the-shelf light intelligence, surveillance and reconnaissance (ISR) aircraft that could complement a potential light attack plane buy.

The service completed a demonstration of four light attack planes at Holloman Air Force Base, New Mexico, in August. During the demonstration, Textron’s Scorpion aircraft caught the attention of Gen. Mike Holmes, head of Air Combat command, because its modular design allows for a wide package of sensors.

As a result, Holmes said, some in the service are now intrigued by the idea of hosting a similar demonstration focused on ISR capabilities.

“If you look at some of the airplanes we flew, there are airplanes that have kind of been built with great big internal bays where you could carry a whole variety of sensors, so it’s an intriguing possibility for Scorpion,” Holmes told reporters during a Sept. 18 roundtable at the Air Force Association’s annual conference.

Scott Donnelly, chief executive of parent company Textron, says Riyadh is one of a number of customers it is in talks with over the developmental aircraft.

The recent arms deal between the USA and Saudi Arabia includes $2 billion for “light close air support” aircraft. However, no details on the type or delivery dates have been disclosed.

Cautioning that its talks with Riyadh are at an “early” stage, Donnelly, speaking on a second-quarter results call, added: “There are certainly a number of things that we are looking at, but we think that now the performance envelope, the capability of what Scorpion can do makes it a very viable product for their requirements. But it’s still in its formative stages, I would say.”

As Saudi Arabia continues its multi-billion dollar international arms shopping spree, it appears to have begun evaluating Textron AirLand’s Scorpion light attack jet. The firm has previously said that the Kingdom is interested in the aircraft, but growing American political opposition to its brutal and protracted intervention in Yemen might slow or scuttle actual purchases.

The aircraft is designed to integrate globally-available commercial components for reducing the total cost of ownership. The modular architecture of the aircraft allows for future integration of various sensors and weapon systems with reduced integration costs.

The internal payload bay is designed to deliver critical operational flexibility, by quickly accepting new payloads for different operational requirements. It can house various modules of sensors, fuel and communications in desirable combination to achieve high performance during a wide range of missions.

Weapon systems, sensors and radars on the Scorpion aircraft

The Scorpion ISR / Strike aircraft can be armed with a range of scaled munitions for indulgent military and homeland security environments.

The aircraft can carry an array of weapons systems on its external hard points under the wings. Three under-wing hard points on either side of the fuselage can hold precision guided munitions (PGMs) and general purpose munitions.

The Scorpion can be integrated with a variety of sensors, electro-optical / infrared devices and communication packages to perform various missions.

Weapons such as the HMP-400 .50 Cal guns and LAU-131A/A rocket launcher were monitored for hot gas ingestion into the intakes. Operational modes were tested and wiring configurations were evaluated. 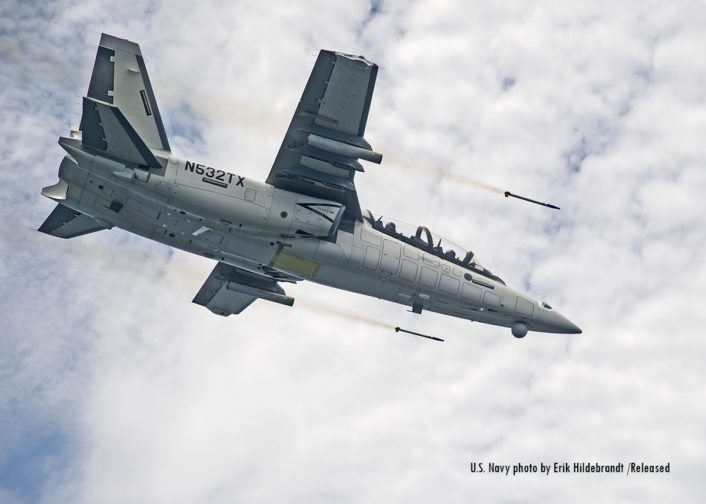 The HMP pods are fitted with the 12.7mm M3P heavy machine gun and carry either 250 or 400 rounds of ammunition. The M3P has a rate of fire of about 1.075 rpm and may use any type of 12.7mm ammunition. The effective range is 3 km versus area targets and 1 km against single vehicles.

The HMP pods are fitted with a 12.7mm M3P heavy machine gun. Three versions are available. The designation HMP is followed by the number of rounds it carries and if it is fitted with a links collector (LC) or links and case collector (LCC).

HMP-400 LC: HMP model with 400 round capacity and links collector. It is identified by its squared rounded nose cone. 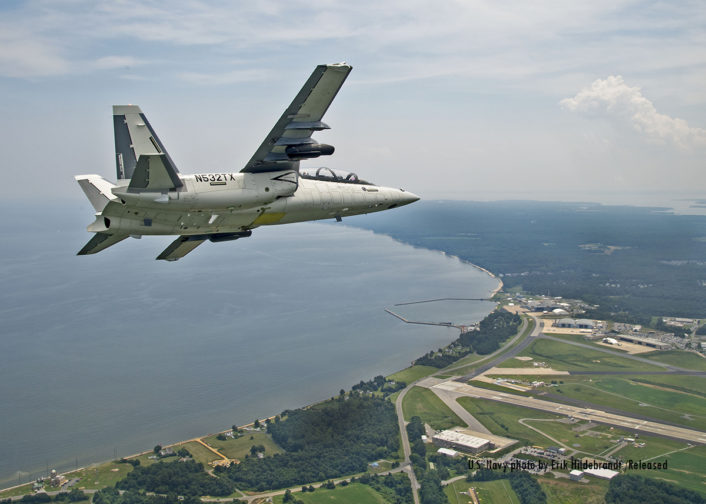 The GBU-12 Paveway II consists of a MK-82 500 pound (250 kg) bomb with an added laser guidance package. This bomb is suitable against small, hardened targets such as battle tanks and other armored vehicles. This bomb also features a reduced collateral damage probability due to its lightweight warhead.

Despite the original contractor for the Paveway II LGB bomb was Raytheon, Lockheed-Martin began assembly Paveway II laser guidance kits in the early years of the 21st century in support of the Global War on Terror and the military campaigns in Iraq (Iraqi Freedom 2003-20??) and Afghanistan (Enduring Freedom 2001). As of September 2005, Lockheed Martin had delivered more than 25,000 guidance kits for the GBU-10, GBU-12 and GBU-16 guided-precision bombs. 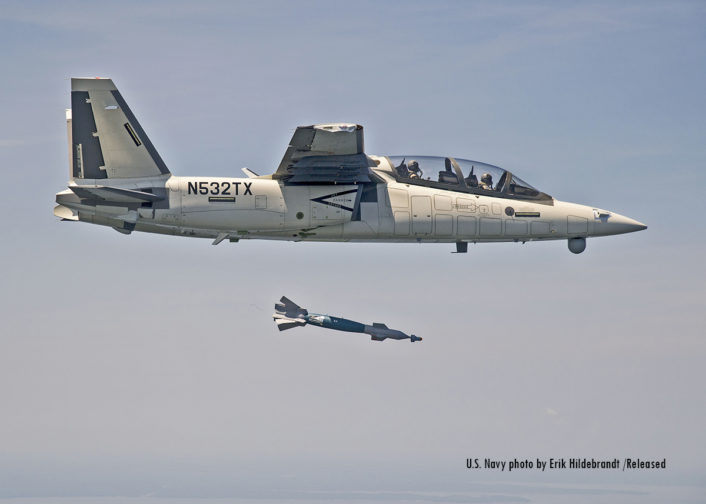 The Textron AirLand Scorpion has been selected by QinetiQ and Thales to provide a large proportion of the platform capabilities for their planned ASDOT bid (ASDOT is the UK Ministry of Defence’s Air Support to Defence Operational Training program). The three company CEOs involved signed a memorandum of understanding at Farnborough yesterday to launch the bid.

An ASDOT contract is due to be awarded in September 2018, with delivery of the service to run for 15 years starting in January 2020. The program aims to deliver a new training capability to meet the needs of a modern force, with increasing emphasis on a mix of live flying with simulation and synthetics. As such, ASDOT is closely linked with the Defence Operational Training Capability—Air (DOTC—Air) program, which is primarily concerned with synthetic training.

The RDY-3 features all the advanced functions required on a multirole aircraft of the 21st century.

The reference in its category

• Adaptable to a wide range of combat aircraft

WESCAM Kinetic is a suite of powerful situational awareness and target detection capabilities that easily integrate with WESCAM’s MX-Series of imaging sensors.  The Suite includes:

Thales and Textron AirLand announced today, June 17, 2015, at the International Paris Air Show 2015, that they have successfully jointly integrated Thales’ I-Master radar on to Textron AirLand’s Scorpion light attack and ISR aircraft. The addition of the radar into the Scorpion’s mission system compliments the Intelligence, Surveillance and Reconnaissance (ISR) sensor suite which already includes a high end EO/IR capability.

High performance imaging radars are now essential in any programme that requires an all weather ISTAR (Intelligence, Surveillance, Target Acquisition and Reconnaissance) capability. To date, high quality SAR/GMTI radars have been too heavy and costly for tactical UAVs or small manned aircraft.

The low weight of I-MASTER means that a combined SAR/GMTI capability can be added to tactical UAVs either in addition to or instead of electro-optic (E/O) sensors. I-MASTER is also designed to fit existing E/O payload mountings. On smaller air vehicles, which are able to carry just one payload, this unique feature enables the sensor to be exchanged within a few minutes. This capability will allow the platform’s role to be quickly adapted as the mission tempo and the environment changes. For larger air vehicles, able to carry more than one payload, collaborative targeting using both SAR/GMTI and EO packages greatly increases the options available to the field commander.

I-MASTER builds upon Thales’ radar expertise that exists in depth in both the UK and France. This expertise has made it possible for Thales to develop a SAR/GMTI radar sensor that not only delivers high performance but also sufficiently light and inexpensive to be fitted to Tactical UAVs. I-MASTER provides an all-weather capability, which dramatically increases Tactical UAV mission effectiveness. High quality imaging is now possible in hostile environments such as cloud and smoke. The ability to image at long stand-off ranges improves UAV survivability by distancing the air vehicle from potential ground fire.

I-MASTER incorporates a high performance Ground Moving Target Indicator (GMTI) able to detect both vehicle and infantry movements at ranges up to 20km. Very low speed targets can be detected through the use of multi-channel processing.

With 360-degree coverage and an innovative stabilised antenna, I-MASTER provides high quality images over a wide area from small air vehicles in a wide range of flight conditions.

Photo By David Dixon | RIGHT-PATTERSON AIR FORCE BASE, Ohio – The Air Force Research Laboratory’s AgilePod is shown mounted on the wing of the Textron Aviation Defense’s Scorpion Light Attack/ISR jet. The AgilePod is an Air Force-trademarked, multi-intelligence reconfigurable pod that enables flight-line operators to customize sensor packages based on specific mission needs. A fit check in late December 2017 provided an opportunity to demonstrate the ability of the pod to rapidly integrate onto a new platform with short notice, highlighting the benefits of Sensor Open Systems Architecture. (Air Force photo by David Dixon/released)

US AIR Force Research Laboratory (AFRL) officials announced on January 2 that AFRL’s intelligence, surveillance and reconnaissance (ISR) pod, the AgilePod, has been successfully test-fitted on Textron Aviation Defense’s Scorpion light attack ISR jet aircraft.  Andrew Soine, an electronics systems engineer in the AFRL Materials and Manufacturing Directorate, said: “We met with the Textron Aviation Defense Scorpion team and discussed the possibility of doing a fit check with their Scorpion platform and the AgilePod.  A few days later they called and said they could get the plane to Wright-Patterson within the week.  We couldn’t miss this opportunity to show the AgilePod’s capabilities on a new class of aircraft.”

The AgilePod is an Air Force-trademarked, multi-intelligence reconfigurable pod that enables flight-line operators to customize sensor packages based on specific mission needs.  The pod takes advantage of the AFRL Sensors Directorate Blue Guardian Open Adaptable Architecture construct and Sensor Open System Architectures.  Open architectures enable rapid integration of sensor technologies through standardized software and hardware interfaces that enable the pod to seamlessly integrate on platforms that use the standard architectures.  This increases the number of missions the pod can augment, expanding the scope of ISR mission possibilities.