The weather on the mountain top chamaoensis while flying search for lost UH-1H. The Air Force Lost UH-1H (26-06-59)

Latest update of the helicopter that had disappeared from the radar on 25/06/2016 mentioned that the searchers allegedly smelt gasoline. But the rescue teams had to retreat from a monsoon storm before they could get any closer. The search would begin again tomorrow.

THE DEFENCE Ministry has said it plans to purchase new helicopters, following the latest chopper crash that killed a crew of three at Khao Chamao Khao Wong National Park.

The bodies of the three crew-members were found yesterday amid the wreckage of an old Air Force UH-1H Huey about 500 metres north of an Air Force radar station on the mountain slope in Chanthaburi. The bodies were retrieved from the crash site and transported by aircraft to Don Mueang Airport for funerals.
The three crewmembers were Squadron Leader Pasit Techasen, Flight Lt Alongkorn Chankrachan and Flight Sgt 1st Class Visut Putthraksa. There were all rewarded with promotions, insignia and compensation for their families.
Heads of the Army and Air Force sent their condolences to families of the officers killed in the crash.
General Prawit Wongsuwan, Deputy Prime Minister and Defence Minister, expressed his sympathy to families of the crew and said the Air Force had plan to buy new helicopters to replace the old ones.
“The helicopter that crashed was a UH-1H Huey, which we have used for around 40 years but given the long period on duty, there must be replacements for our air squadron,” Prawit said.
So, he said the Army would put this plan to Cabinet, before a deal can start, the plan must pass consideration first.
“There are always protests about corruption, every time the Army plans to buy weapons. Indeed, when we purchase new arms, we do it on state-to-state trade and there is no corruption in our arm dealing process,” he ensured.
Directorate of Air Operations Control commander ACM Sutthipong Inseeyong said the search teams had found the remains of two helicopter pilots and one mechanic, along with the helicopter debris in the middle of dense forest 500 metres north the Air Force radar station.
Sutthipong said the area had been sealed off and the bodies were carried down the
mountain and transferred to Don Mueang by air.
Royal Thai Air Force spokesperson Phongsak Semachai said the Air Force would host funerals for all three men. With the loss of these valuable men, Air Force Commander-in-Chief Alongkorn Chankrachang had expressed condolences to their families. He would
promote them, and compensate their families.
Squadron Leader Pasit would be made an Air Marshall and his family would receive Bt3 million in compensation. Flight Lt Alongkorn would be made a Group Captain and his family will receive Bt2.5 million. Flight Sgt 1st Class Visut would be made an Air Vice Marshall and his family will get Bt2.76 million. They will also get an insignia to honour their death on duty.
The crash happened on Saturday afternoon, when the helicopter disappeared from radar screens during a supply mission. Rough terrain and heavy rain had slowed the search mission until yesterday morning. For more pics Source nationmultimedia.com 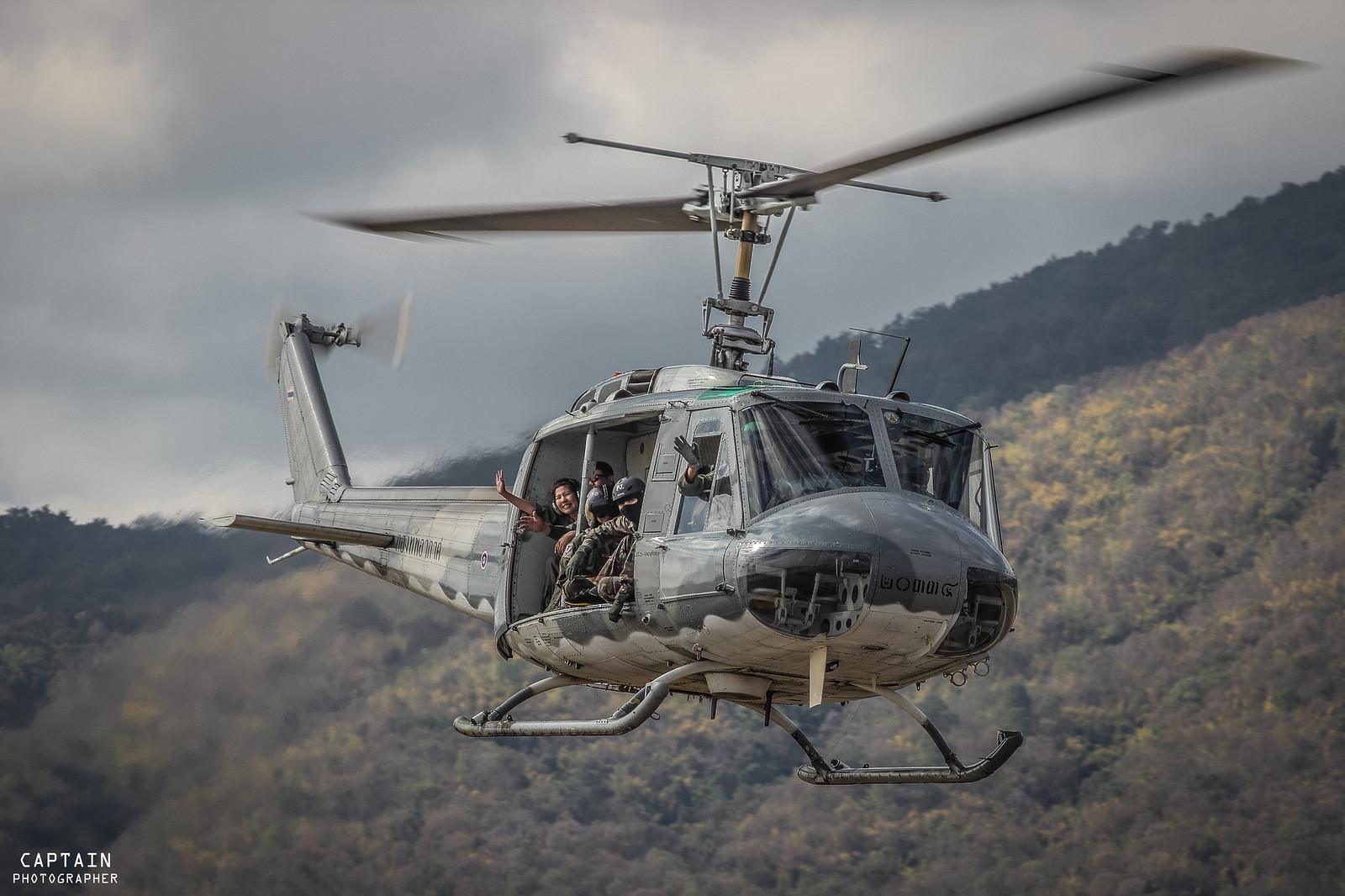 From 1965 to 1973, the Bell UH-1, officially named “Iroquois” was the most common utility helicopter used in Vietnam. The “Huey” nickname stuck thanks to her early “HU-1” designation (it was later redesignated to UH-1 with the normalization of 1962). This particular helicopter is a “Slick”, used for troop carrying. It is not fitted with external weapons to save weight and is only armed with the M60s used by the door gunners. These aircraft operated in the hostile environment of Vietnam for almost a decade.

This Huey served in the 25th Infantry Division in Vietnam, performing troop insertions and extractions, medical evacuations, helicopter crew recoveries, smoke, sniffer psyops, and firefly missions. Based at Cu Chi, it survived multiple small arms attacks and one RPG strike. It was returned to service in 2011 to operate as a “Thank You” to Vietnam War Veterans and has completed over 180 missions since then.

Many Vietnam Veterans describe the UH-1 “Huey” helicopter as the “sound of our war”. Vietnam Helicopter Pilots Association records show that 7,013 Hueys survived in the Vietnam War, totaling 7,531,955 flight hours. Over 90,000 patients were airlifted (over half of them Americans). The average time between field wound to hospitalization was less than one hour. During the Korean and World War II wars this time was measured primarily in days, not hours. The utilization of helicopters dramatically increased warfare survival rates.

Typical armament included two M-60D machine guns on fixed door mounts manned by the Crew Chief on the left and a Door Gunner on the right. The M-60D is a 7.62mm NATO caliber weapon with a cyclic rate of fire of 600 to 700 rounds per minute. The large cans below the M-60’s held roughly 2,000 rounds of linked 7.62mm ammunition and were a typical field modification replacing the authorized can which held 500 rounds.

Each Crew Chief and Door Gunner also carried a secondary weapon, usually an M-16 rifle but sometimes more exotic types. Because pilots were not issued M-16’s, they often carried other unauthorized weapons slung over their armored seats for personal protection. Crew Chiefs and Door Gunners always carried colored smoke grenades, often as you see them here on the seat posts. These were used to mark targets for the Gunships when receiving hostile fire or to mark landing zones (LZ’s).

All aircrew were issued body armor, jokingly referred to as “chicken plates”. If a Crew Chief or Door Gunner chose not to wear it, the chicken plate was often stowed under his seat for protection from enemy weapons fire from below. 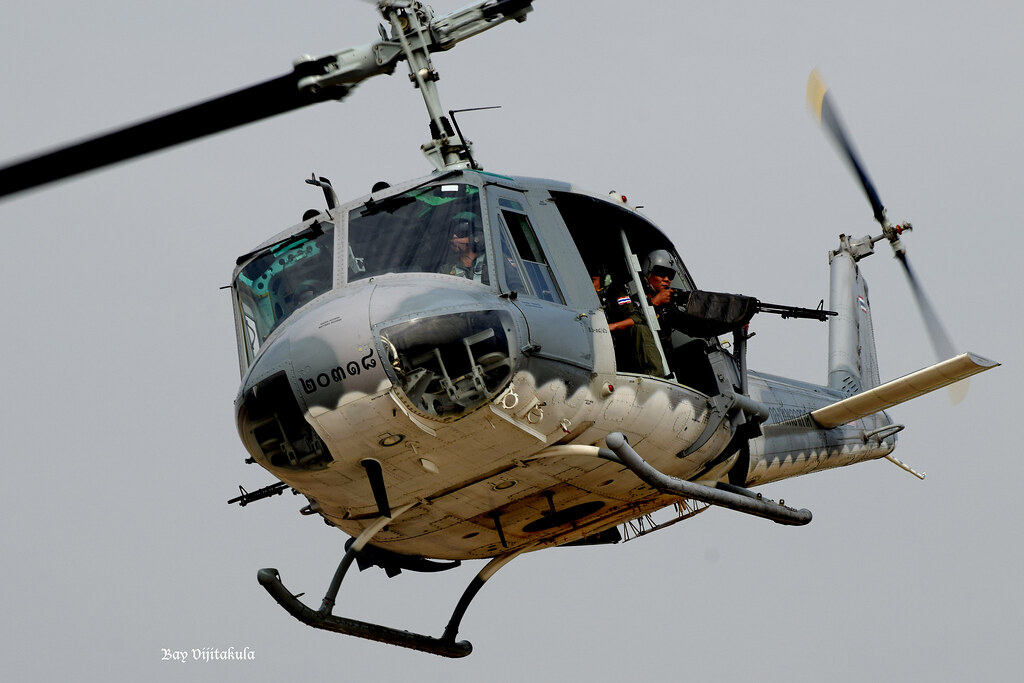