Designed for destruction of enemy surface combatants, boats and transports independently or in cooperation with naval striking forces.

*Note not actual model this is a V20

The supersonic P-800 Yakhont (Gem) is a ramjet version of P-80 Zubr [SS-N-7 Starbright]. The ship, submarine and coastal-launched Yakhont is launched from the unified ampoule-shaped transport-launching container (TLC). The container is 9 m long, is 0.71 m in diameter. The firing range reaches 300 km (162 nmi.) when flying along a combined trajectory and 120 kg (265 lb.) when following only a low-altitude trajectory. Flight speed varying over the range from M=2.0 to M=2.5 is provided by the kerosene-fueled multi-mode liquid-fuel ramjet. The P-800 Bolid is the encapsulated, submarine launched version of Yakhont. An air-launched version of the missile with the take-off weight of 2,500 kg (5,507 lb.) is also being developed. The closest American counterparts, the Tomahawk and Harpoon missiles, are subsonic; the best French antiship missile, the Exocet, has a range of only 45 miles.

The Uran missile systems comprise 16 Kh-35 missiles – 4×4 launchers with pressurised transport-launching containers. The Uran system now serves as armament of Project 1149.8 missile equipped gun boats and other vessels. A coastal defense variant and, more recently, an antiaircraft variant were later developed on the basis of this missile.The Kh-35 missile has a normal aerodynamic design and an aluminium-alloy airframe. The missile’s power plant consists of a solid-fuel booster and a turbojet powerplant. The missile’s take-off weight is 750 kilograms, the warhead weighs 150 kilograms with a range of up to 130 kilometres.

The Kh-35U anti-ship aircraft missile (Article 78U), propelled by a turbojet engine, flies toward its target at a speed of about the 300 m/s at an extremely low altitude. Owing to its high-precision radio-altimeter, the missile can skim the sea waves at an altitude of 3-5 metres at the terminal phase of trajectory. Its guidance system combines inertial guidance for during the initial flight stage and active-radar guidance during the remaining flight stage.

The missile has a folding wing and a folding tail fin.For use by coastal or shipborne launchers the missile is equipped with a rocket starter-accelerator, a container-type launcher having room for four missiles.

100-mm А190 Lightweight Multipurpose Naval Gun is a single-barrel turreted automatic gun that may be installed on ships with the displacement of 500 t and more. Upon the operator’s command the fire control module automatically turns the artillery system to standby or combat-ready position, ensures ammunition selection and feeding, gun laying and firing. As a result, the artillery system has minimum response time and high rate of fire.

The upgraded version designated as А190-01 provides significant increase in combat effectiveness. High survivability, reliability and combat effectiveness make it possible to operate the gun in various environments day and night all year around. Data @burevestnik.com

intercept of the missile taking off from the tracked target.

The command module detects and tracks threats, distributes targeting data to the combat modules, and interrogates IFF of approaching threats. The command module has a 3-D target detection radar, and an all weather multi-band integrated control system. Depending on the number of installed combat modules, the system can engage multiple targets simultaneously. The combat modules automatically track using either radar, electro-optronic control system (such as FLIRs) or both, and then engages targets with missiles and guns.

The guns used in the Kashtan are the GSh-30K six-barrel 30 mm rotary cannon. Individually, each GSh-30K has a higher rate of fire compared to other guns used by other CIWS such as the GAU-8 on the Goalkeeper and the M61 Vulcan on the Phalanx. Along with a high rate of fire, the fairly heavy round (390 g or 14 oz) used by the Kashtan is comparable to the DPU rounds of the GAU-8 Avenger (425 g or 15.0 oz), although the muzzle velocity (and therefore both the kinetic energy and effective range) is slightly lower, partially offsetting the high caliber and rate of fire.

Note: I omitted the model with the missiles as it does not indicate any missiles

Pallada sonar is designed for underwater detection in the active mode of combat swimmers with (and without) their delivery vehicles, from the stopped ship. The sonar is capable of classifying and tracking up to three detected targets.

The sonar provides a 360-deg underwater coverage, and its acoustic array can be dipped to a depth of up to 20 m. Electronic equipment housed in the junction box and control console serves to emit, receive and process hydroacoustic signals. All relevant data is rep-resented on a display panel with a keyboard and a trackball. Pallada sonar is controlled by one operator.

The radar makes coordinated use of active and passive channels to acquire and designate targets. It boasts increased operational range thanks to employment of high-energy active channel, advanced methods of signal genera-tion and complex modulated signal process-ing, coupled with passive channel data, and requirements of covert operation, in severe ECM and sea clutter conditions.

The active channel uses a multiprocessor system to generate probing signals and radar data. It is integrated with a multi-computer secondary data processing, control and display network.

The passive channel performs hard-ware/software-based analysis and classification of incoming radar signals by comparing their parameters with those available in the data-base (up to 1,000 entries). 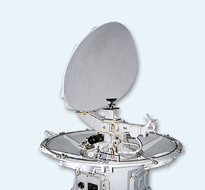 MINERAL-ME Shipborne Radar is designed for:

Positiv-ME1 and Positiv-ME1.2 Active Radars are designed for plan scanning, detection and tracking of air and surface targets, output of target designation data to users. The radars perform the following tasks:

The system provides shipborne systems of submarines and surface ships with navigation and stabilization parameters. It operates in autonomous and GPS/GLONASS-aided modes.
Any types of users can be connected.
Data output to users is performed in digital (MIL-STD-1553B) and analog form.