Designed for protection of ships, vessels and communications against hostile surface ships and submarines as well as to meet attacks of air assault weapons both independently and as task force ship, for search and disposal of submarines, fire support of landing troops, frontier guard and patrol duties on protection of territorial waters and exclusive economic zone.

The more advanced 3M-54E combines the subsonic cruise airframe of the 3M-54E1/3M-14E with a Mach 2.9 rocket propelled guided payload. It also employs the ARGS-54E seeker.

Like its subsonic sibling, it approaches from under the radar horizon using the same radar seeker to detect its target. Once locked on, it discards the cruise airframe, fires its rocket motor, and accelerates to Mach 2.9 at a sea skimming altitude of 15 feet. Novator claim the missile follows a zig-zag flightpath to defeat defences. Both the 3M-54E1 and 3M-54E are small weapons which are difficult to detect on radar, especially should even basic radar signature reduction techniques be applied to them.  Data ausairpower.net

The Uran missile systems comprise 16 Kh-35 missiles – 4×4 launchers with pressurised transport-launching containers. The Uran system now serves as armament of Project 1149.8 missile equipped gun boats and other vessels. A coastal defense variant and, more recently, an antiaircraft variant were later developed on the basis of this missile.The Kh-35 missile has a normal aerodynamic design and an aluminium-alloy airframe. The missile’s power plant consists of a solid-fuel booster and a turbojet powerplant. The missile’s take-off weight is 750 kilograms, the warhead weighs 150 kilograms with a range of up to 130 kilometres.

The Kh-35U anti-ship aircraft missile (Article 78U), propelled by a turbojet engine, flies toward its target at a speed of about the 300 m/s at an extremely low altitude. Owing to its high-precision radio-altimeter, the missile can skim the sea waves at an altitude of 3-5 metres at the terminal phase of trajectory. Its guidance system combines inertial guidance for during the initial flight stage and active-radar guidance during the remaining flight stage.

The missile has a folding wing and a folding tail fin.For use by coastal or shipborne launchers the missile is equipped with a rocket starter-accelerator, a container-type launcher having room for four missiles.

100-mm А190 Lightweight Multipurpose Naval Gun is a single-barrel turreted automatic gun that may be installed on ships with the displacement of 500 t and more. Upon the operator’s command the fire control module automatically turns the artillery system to standby or combat-ready position, ensures ammunition selection and feeding, gun laying and firing. As a result, the artillery system has minimum response time and high rate of fire.

The upgraded version designated as А190-01 provides significant increase in combat effectiveness. High survivability, reliability and combat effectiveness make it possible to operate the gun in various environments day and night all year around. Data burevestnik.com

Control and guidance – RCS “Vimpel-220” with MP-123 radar (BASS TILT) – developed by KB factory “Topaz”, chief designer V.P.Egorov. Provides support and guidance of artillery systems for air, surface and ground targets at ranges of up to 5000 m with the management of 1-2 units (AK-630, AK-630M, AK-725, AK-176, etc.). Paragraph fire control (CAV) is equipped with a TV-scooter. The system provides a backup post-fire management in the form of a column with a sighting collimator sight (necessarily used for firing at ground targets no contrast, for example, on the landing ships).

The gun itself is a 6 barrel Gatling gun designated as AO-18.  The barrels are in a single block, having exhaust-driven joint automatics.  They are belt fed with a flat magazine in the AK-630 and a drum magazine in the AK-630M.  These weapons form a part of a complete self-defense system called A-213-Vympel-A, which includes gun, radar, optical and TV control systems.  A single MP-123 Vympel system can control two 30 mm guns or one 30 mm and one 57 mm gun.  This system can engage air targets at ranges up to 4,000 m (4,400 yards) and surface targets at ranges up to 5,000 m (5,500 yards).  The TV control system can detect MTB sized ships at the distance of 75 km (40 nm) and the fighter-size air targets at 7,000 m (7,600 yards).  This system is completely automatic and does not require human supervision although it can be directed from optical control posts in case of damage or for firing on shore targets. The Palma is a ship-based air defense system designed to engage rotary- and fixed-wing aircraft, aerial bombs, anti-ship cruise missiles, small displacement vessels and small targets onshore. The weapon system consists of two 30mm six-barrel AO-18KD/6K30GSh automatic cannons and up to eight Sosna-R laser-guided hypersonic surface-to-air missiles (two 3R-99E firing modules). All in, the Palma can engage up to six targets simultaneously at distances between 200 and 8,000 meters and flying at a maximum altitude of 3,500 meters. The weapon system only takes three-to-five seconds to get ready to fire.

The 30mm AO-18KD cannons range varies between 200 and 4,000 meters and flying below 3,000 meters. The ammunition load is 1,500 rounds of armor piercing or high explosive fragmentation and incendiary ammunition. The guns on a 3S-89 mount feature a maximum rate of fire of 10,000 rounds per minute. The Sosna missile system is effective against airborne targets at altitudes between 2 and 3,500 meters and ranges between 1,300 and 8,000 meters. The ECM and jamming-resistant fire control system provided to Palma includes 3V-89 TV and Infrared cameras, laser range-finder, laser beam missile guidance system and 3Ts-99 target acquisition radar.

The 3M-47 Ghibka turret was designed by Altair Naval Radio Electronics Scientific Research Institute and is manufactured by the Ratep Joint Stock Company.

Ghibka 3M-47 (3M47 Gibka) Turret Mount is intended for guidance and remote automated launching of IGLA type missiles to provide protection of surface ships with displacement of 200 tons and over against attacks of anti-ship missiles, aircraft and helicopters in close-in area..

The RPK-8 is ship-based anti-submarine rocket system designed to protected surface ships from hostile submarines, torpedoes and combat swimmers. The RPK-8 weapon system comprises the RBU-6000 12-tube rocket launcher, 212mm 90R anti-submarine rocket, fire control system, ammo loading system and ground support equipment. The target designation is provided through the ship’s sonar system. The 90R rocket carries a projectile fitted with a high-explosive shaped charge that separates from its carrier when entering into the water. The projectile’s effective homing head search radius is 130 meters. The RPK-8 weapon system is effective against underwater threats at ranges from 600 meters to 4,300 meters.

The Medvedka is a non-guided, subsonic, solid-propellant missile fitted with a MPT-1UE anti-submarine torpedo warhead. The homing torpedo is released using a parachute and is qualified for operations at shallow water and Sea State 6. All in the weapon system has a maximum range of 20 kilometers. The MPT-1UE torpedo weighs 285 kg and is 3.05 meters in length and 324mm in diameter. The weapon system is ready to fire its first missile in 15 seconds and can launch the second missile in six seconds. The two-missile mount weighs about 9.2t, the four- and eight-missile variants weigh 12t and 19.4t respectively.

Main Jamming systems is the  TK-25E-5 Jammer. That can Jam any kinda Radar Emitting Objects, Basically Airborne and Shipborne Target Acquisition Radars, These Radars are used in all kind of Ships to Search and Track Enemy ships and Ready to Launch and Guide any Kind of Missiles, The Airborne Target Acquisition Radars means Anti Submarine Aircrafts Like P 3 , P 8 and Russian Tu 142, IL 38, These Radars also Track Ships, But here the TK-25E-5 Jammer do it’s Jobs by feeding Fake Targets and Information’s disrupting their Command and Control Center, further more the Jammer can Disable the Enemy Radars too, mostly they can able to jam Airborne Radars and Make it useless in Combat. Data sajeevpearlj.blogspot.com

Positiv-ME1 and Positiv-ME1.2 Active Radars are designed for plan scanning, detection and tracking of air and surface targets, output of target designation data to users. The radars perform the following tasks:

Fregat-MAE-4K 3D Shipborne One-Channel Radar is designed for detection of air (including small-sized and flying at low altitude) and surface targets and output of target designation data to firing units. The radar performs the following tasks:

The radar has built-in test equipment for automatic performance monitoring and diagnostics that helps to detect failures and malfunctions with detection accuracy up to a line-replaceable component. 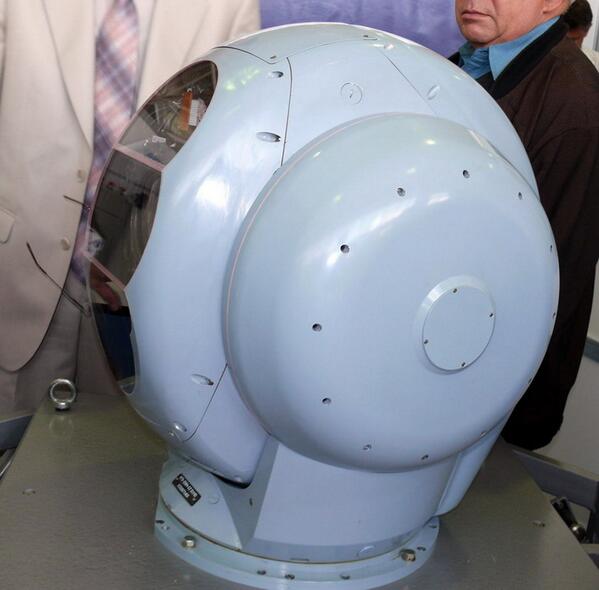