MMP is the latest (fifth) generation land combat missile system designed for dismounted infantry as well as for integration on combat vehicles.

MMP will replace the Milan and Javelin anti-tank missiles in service with the French Army and special forces from 2017. Taking into account the battle experience gained from recent conflicts in which the French Army has been engaged, MMP is a response to the demands that have been expressed in terms of required capabilities: firing from confined spaces, “fire-and-forget”, and self-guidance with a “man-in-the-loop” facility.

Interactive firing post
• Weight (incl. tripod and battery): 11 kg
• Autonomous with battery or can be connected to external power sources

In line with the initial schedule defined by the DGA (the French procurement agency) in 2013, MBDA has started series production of the MMP (Missile Moyenne Portée – medium-range missile) system. First deliveries to the French armed forces as a replacement for Milan will take place as of 2017.

The final development firing of the MMP validated a complex scenario in which the target was hidden at the time of firing and then designated in flight by the gunner by means of the seeker’s feedback image supplied via a fibre-optic link. In this “indirect firing” mode, the MMP offers unparalleled precision and significantly reduces the risk of collateral damage. Since then, the DGA has declared the start of the qualifying phase for which the first four firings have already been carried out.

Since the programme was launched in 2011, some 20 test firings and numerous ground tests have served to validate all the performance values required by the French armed forces, such as system resistance and employability in extreme environment and temperature conditions, shooting under infra-red guidance at a long-range target (4,100 meters), firing in confined spaces, or warhead versatility, to ensure effectiveness against varied targets such as combat vehicles, dismounted combatants in open spaces, or entrenched in infrastructure.

Notified by the DGA in 2013, the MMP programme will provide 2,850 missiles and 400 firing posts to the French armed forces starting from 2017.

The MMP is a fifth generation land combat missile system ensuring superiority in the battlefield through its versatile warhead and its two firing modes (“direct firing” with “fire-and-forget” or “man- in- the- loop” options, and “indirect firing”). Source mbda-systems.com

Paris – Le  Bourget MBDA has  unveiled  its new  naval  offering based  on  the MMP  5th  generation  ground  combat  missile  at  Euronaval.  This  decision  follows  the operational evaluation  campaign carried out at the end of the summer by the French armed forces in Djibouti to confirm the reliability and operational performance of the MMP system in a hot environment, both from the ground and also from a rigid hulled inflatable boat (RHIB) moving at high speed.

A total of nine MMP missiles were fired with all reaching their target. Two of these shots were fired by the maritime force of marines and commandos from a ECUME RHIB. A first firing from the sea-to- land and the second from sea-to-sea have demonstrated the ease of use of the MMP.

The  success  of  this  evaluation  allows  MBDA  to  extend  the  integration  perspectives  of  the  MMP system  and  to  propose  it  on  fast  attack  craft  or  semi-rigid  boats  for  missions  against  hostile  ships, coastal  defenses  or  armored  vehicles,  especially  in  support  of  a  landing  of  small  units  or  Special Forces.

At  Euronaval,  the  MMP  system  (firing  post  and  missile)  is  presented  on  the  Zodiac  Milpro  booth, installed  on  a  Hurricane  type  RHIB.  On  fast  patrol  boats,  the  MMP  will  be  fired  from  a  stabilised turret carrying four ready-to-fire ammunitions installed in launchers protecting the missiles from the maritime  environment.  The  turret  can  be  controlled  from  a  dedicated  console  or  from  a multifunction console in the ship’s operations center.

Antoine Bouvier, CEO of MBDA, said: “Today’s launch of a family of naval systems based on the MMP missile is aligned with the trajectory we initiated with the French armies at the launch of the MMP program  in 2011.  By  deciding  at that time to  introduce  the most modern  technologies of  guidance and propulsion together with a multi-effect warhead, we laid the foundations of a family of weapons capable of meeting the most demanding constraints the armed forces may encounter in the field, in terms  of  tactical  effects,  in  terms  of  mobility,  as  well  as  in  environmental  terms.  The  MMP  family sees today the advent of naval versions. I have no doubt that the MMP will give birth to other more powerful versions in the near future.“ Source mbda-systems.com

Krauss-Maffei Wegmann has launched the FLW500, which is the latest entry to its FLW family of remote weapon stations (RWS) at Eurosatory 2016.

The latest FLW500 has a typical weight of 500 kg above the deck but this depends on the type of weapons fitted and associated ammunition supply.

The version being shown at the exhibition is armed with the Orbital ATK Armament Systems 30 mm M230LF dual-feed low-recoil weapon that is provided with 150 rounds of ready to use ammunition.

A co-axial 7.62 mm FN-MAG machine gun (MG) is provided with 250 rounds of ready use ammunition.

The weapons are fully stabilised with the mount featuring electric traverse through 360° and elevation from -10 to 50°. 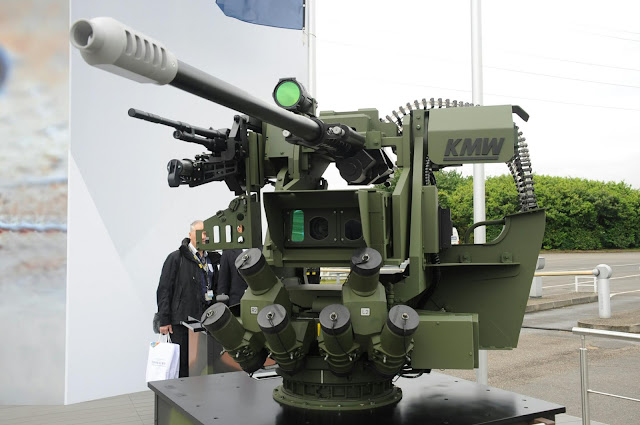 KMW is unveiling the remote controlled Light Weapon Station 500 (FLW 500) demonstration unit for the first time. Equipped with tertiary armament, the system is a further development of the operation-tested, highly successful FLW 100 and 200. In addition to a 30 mm-calibre automatic cannon as the main gun, secondary armament in the form of a 7.62 mm-calibre machine gun as well as a 76 mm-calibre multi-tube launcher system as tertiary armament are provided in the FLW 500. The FLW 500 can also be optionally equipped with guided missiles, such as anti-tank guided missiles.

The modular system enables continued use of weapon equipment sets from the established FLW 100 and 200. With a system weight of approximately 500 kg, it is suitable for use on light protected vehicles with limited roof loads. @miltechmag.com