Although Super Hornet and Growler production is currently set to end in 2018, Boeing is confident of extending the line through to the mid-2020s based on a USN requirement to replace worn out airframes and international interest. Source: IHS/Patrick Allen

Boeing anticipates an extension of its F/A-18E/F Super Hornet and EA-18G Growler production lines as a result of an increased operational tempo by the US Navy (USN) and strong international interest in procuring the platform, company officials told reporters on 10 June.

Speaking at Boeing’s Global Sustainment and Support (GS&S) site at Cecil Field in northern Florida, Dan Gillian, Vice President of the F/A-18 and EA-18G programmes, said that, with the USN burning through airframe hours at a far higher rate than originally intended and with additional exports expected in the near term, the company is confident of extending production from the current mid-2018 cut-off point through into the next decade.

“I believe that we will continue to build new Hornets and Growlers. We have slowed production down to two aircraft per month, and we will keep it at that level through to mid-2018. There is strong domestic and international demand that we see sustaining production through to the mid-2020s,” Gillian said.

The US Navy’s current programme of record is for 568 Super Hornets and 160 Growlers. As Gillian noted, however, the service has identified a ‘Super Hornet shortfall’ that will materialise in the 2030s/2040s as aircraft prematurely reach the end of their 6,000 hour airframe lives owing to the high operational tempo being flown today. To try and mitigate this, additional aircraft have already been requested in the fiscal year defence budget, and Gillian expressed his confidence that these will be approved.

On the international front, Gillian noted that a deal with Kuwait is currently going through the Foreign Military Sales (FMS) process with the US government and should be finalised in the not-too-distant future. Current legacy Hornet operator Finland has issued a request for proposals (RfP) that Boeing is preparing its response to, as has Belgium. Spain, which also now flies the Hornet, is in the early stages of a fighter procurement project for which Boeing will bid the Super Hornet, while India and Canada are being offered the platform to fulfil their respective requirements also.

Boeing Confident Fighter Line Will Be Open in 2020s

Boeing’s F/A-18, Marked for Death, Gets a New Lease on Life

The UK’s Project Centurion activity is on track to deliver a seamless transition between the UK Royal Air Force’s Panavia Tornado GR4 strike aircraft and the multi-role Eurofighter Typhoon later this decade, according to BAE Systems.

“We’re on course,” Andy Flynn, BAE’s delivery director for the Centurion and Typhoon projects, said at the company’s Warton final assembly site in Lancashire on 9 June.

By the end of 2018, the current strike potential of the Tornado must have been fully moved to the Typhoon – including its use of the MBDA Storm Shadow cruise missile (above). In its P2E guise the Typhoon will be able to deploy the weapon, plus the same supplier’s Meteor beyond-visual-range air-to-air missile.

Further flight-testing of both weapons is currently underway, with a final release of the Storm Shadow from the platform due to be conducted in mid-June. To be made over a test range in the Hebrides while operating from Stornoway, this will be “an end-to-end test, with data passed to the weapon and the missile fired up”, Flynn says. Previous tests have involved un-powered releases from the Eurofighter.

The Royal Air Force will conduct additional testing from Warton, before work shifts to its Coningsby base in Lincolnshire early next year. Entry into service is scheduled later in 2017 or during 2018, according to BAE, will full capability to follow.

A final phase of test work with the Meteor is also scheduled for July, with this to include the last two development clearance firings with the missile.

Meanwhile, early work on a P3E weapons enhancement for the UK is already being conducted, with this involving MBDA’s developmental Brimstone 2 air-to-surface missile (image above shows six being carried).

“Brimstone 2 will be flying this summer,” says Flynn. The activity will involve instrumented production aircraft IPA6 and single-seat Typhoon BS117.

The German Navy has been given clearance to use the Saab/Diehl Defence RBS 15 Mk 3 anti-ship missile in the land attack role following approval from the Bundesamtes für Ausrüstung, Informationstechnik und Nutzung der Bundeswehr’s (BAAINBw’s) K 130 corvette project office on 3 June.

Introduced to German naval service on board the five K 130 corvettes, the RBS 15 Mk 3 is an evolution of the earlier RBS 15 Mk 2, and retains the 200 kg high-explosive blast/pre-fragmented warhead.

The biennial Eurosatory defense expo that kicked off on Monday for a five-day run brings together an estimated 1,600 defense-related suppliers from some 70 countries.

A total of 21 South Korean defense manufacturers including Hanwha Techwin Corp. and Korea Aerospace Industries Ltd. (KAI) are present at Eurosatory 2016 and are showcasing weapons made with home-grown technology, officials said.

Hanwha Techwin displayed the K-9 self-propelled howitzer that can hurl a 155 millimeter round to a maximum range of some 40 kilometer. The gun, which has been employed by South Korean troops since 2000, has been exported to Turkey and Poland.

The KAI, South Korea’s sole aircraft maker, said it displayed a mock up of its Surion (KUH-1) helicopter.

The Surion chopper was produced as part of a 1.3 trillion won (1.1 billion) military procurement project designed to create the country’s first locally built helicopter. Since its first flight test in 2010, the helicopter has been adapted for both military and non-military missions.

The medium-sized chopper is currently used by the South Korean military as well as the police.

South Korea’s No. 2 carmaker Kia Motors Corp. said it showcased a light tactical vehicle, its version of the Humvee, at the defense show. The automaker is preparing to mass produce the military vehicle, in several configurations, that includes an armored version suited for reconnaissance. 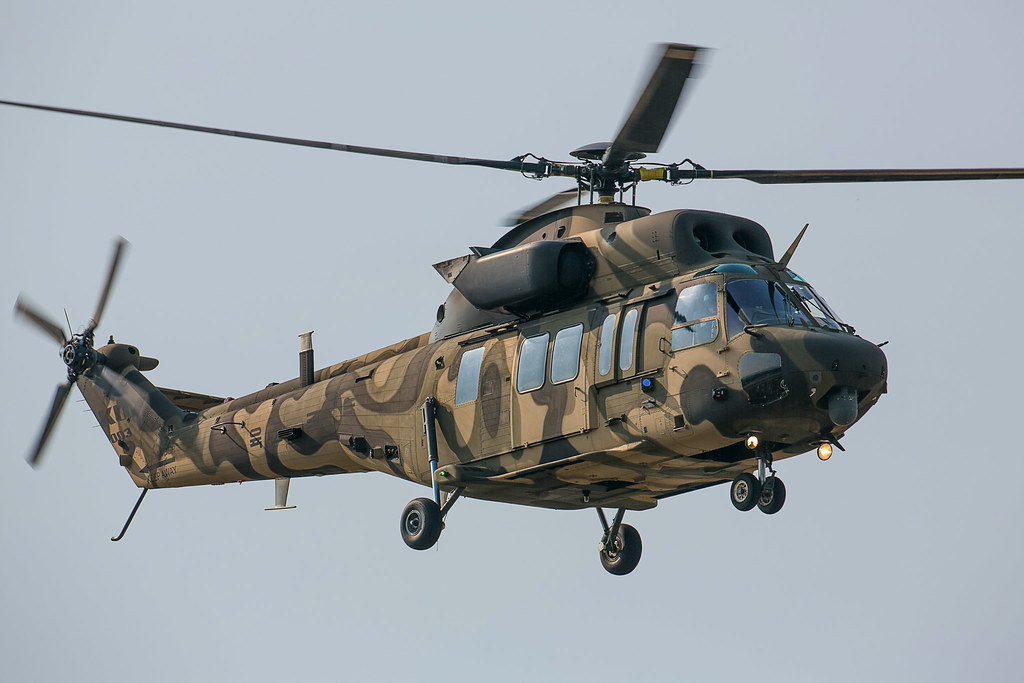