The Priboy landing helicopter dock (LHD) is the project below!

The characteristics of the project ‘Priboy’ are:

Polyakov told IHS Jane’s during a visit to the company’s facility in St Petersburg that KGNC has developed the Priboy-E LHD design on its own initiative.

The Priboy (alternatively, Priboi) design was originally developed by KGNC as a potential replacement for the Mistral-class LHDs that Russia ordered from France that were subsequently sold to Egypt.

Jane’s have indicated this as the Priboy landing helicopter dock (LHD), however Russian documents indicate that it is the  Lavina (“Avalanche”)  assault helicopter carrier dock-ship also developed by Krylov Central Scientific Research Institute – according to “The Russian International Affairs Council (RIAC)”

“Krylov State Research Center developed the project, amphibious assault ship, helicopter carrier” Avalanche “with a displacement of 24 thousand tons for the replacement of” Mistral “. “In the name of the Krylov Central Scientific Research Institute developed an alternative” Mistral “helicopter project” Avalanche “with a displacement of 24,000 tons, even more than the French ship (21 thousand tonnes).”

Future ship in its architectural design type is polutrimaranom, with a range of sailing 5000 nautical miles at 18 knots, maximum speed 22 knots, the crew of 320 people, desantovmestimostyu 500 people, or 50 armored personnel carriers.

“The project involves the basing of 16 helicopters: multipurpose Ka-27 transport-combat Ka-29 and Ka-52K shock”, – said the representative of the military industrial complex. It is also basing of six landing craft project 11770 “Chamois” or six air assault boat project 03160 “Raptor”. On the ship will be armed, according to the draft, gun mount AK-176M and AK-630M-2 “Duet”, marine anti-aircraft complexes “Carapace-ME.”

The characteristics of the project ‘Lavina’ are:

The landing craft of the project А223 for the Russian Navy: Here

As reports the Internet-the newspaper “Izvestia”, the Russian Navy would consider purchasing landing craft of the project А223 developed at the Zelenodolsk plant.They are designed to transport military personnel and equipment on unequipped coast as in pure water, and in the context of maltobiose ice. Unlike their predecessors, the landing craft of the project 21820 “Dugong” is the ability to boot from large amphibious helicopter — dock ships of the Mistral type, or “Avalanche”.

“The Russian Navy as a Military Instrument of Global Politics: Prospects for Development” 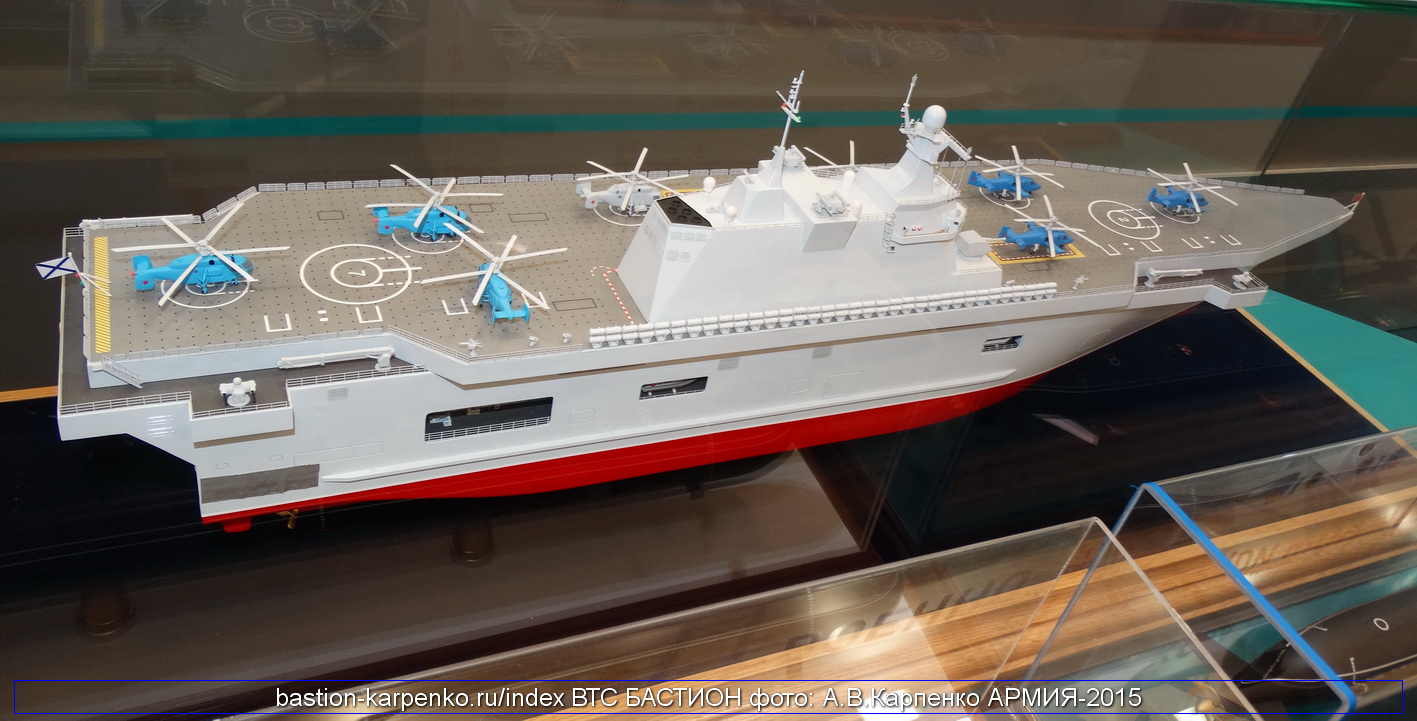 The Lavina assault helicopter carrier dock-ship, developed by Krylov Central Scientific Research Institute, appears to be the most promising, although controversial, and offers a domestic alternative to Mistral class ships.

Given the longer flight deck of the helicopter carrier of Russian design than that of Mistral, and smaller deck space required for takeoff and landing due to the more compact size of Kamov helicopters compared to their Western counterparts, it makes sense to organize eight helicopter takeoff/landing spots on the flight deck. This will make it possible to send a group of six combat/transport helicopters on combat missions with an air assault company on board and two close support combat helicopters (Ka-52K), followed by a rapid takeoff of the second wave of transport and combat helicopters.

Since the average rate of serviceability of aircraft on board the helicopter carriers is usually less than 100%, it appears expedient to increase the number of shipboard helicopters to 20-22. Lavina LHD designers appear to have neglected the fact that by purchasing French landing helicopter docks, the Navy planned to deploy more than sixteen Kamov helicopters aboard each. The smaller size of Russian helicopters compared to the French ones allowed this in theory. This idea has never been tried out, but the Egyptian Navy, having bought 50 Kamov Ka-52 helicopters, probably also plans to deploy a larger helicopter group on the unexpectedly purchased ships.

This promising assault helicopter carrier of domestic construction will allow the carrying out of helicopter-borne assaults of two marine companies one after another, even if some transport and combat helicopters on board happen to be non-operational due to malfunctions and/or periodic technical servicing.

The ability to provide “over-the-horizon landing” is one of the basic requirements of modern landing craft of the amphibious forces . This means that the amphibious warfare ships should be able to land personnel, weapons, equipment and cargo on the coast of the enemy from a safe distance of at least 25 miles from shore (not less than 46 km) to keep away from the hitting area of the enemy’s coastal defense.

Bauman University designers offer a 30.7-ton armored wheeled landing vehicle, capable of covering water distance of up to 60 km including the areas of effective missile and artillery fire of the coastal defense, at a speed exceeding 37 km/h. As envisioned by designers, apart from the crew, the armored vehicle will transport a landing force of 10 marines, and carry weapons that BMP-3M infantry fighting vehicles in operational service are fitted with.

Equipping Russian naval infantry with such a fighting vehicle is bound to bring about revolutionary changes in the national tactics of marine landing. In fact, the landing and combat capabilities of Russian marines have been limited by the characteristics of armored combat vehicles, for the most part, Soviet-designed wheeled floating BTR-80 amphibious armored personnel carriers, which are insufficiently armed and poorly protected. The replacement of the BTR-80s with BTR-82s that is currently underway in the Marine Corps should be considered only as a temporary measure, until new generation high-speed armored amphibious vehicles with previously unattainable combination of mobility, armor and firepower enter into military service.

In this regard, the Lavina amphibious assault ship designers’ attempt to equip their landing craft, having a displacement of 24 thousand tons, with a proposed bow ramp for amphibious logistics over the shore, sounds inappropriate. This unloading will require an unsafe approach to the shore of a big amphibious assault ship, carrying many aircraft and a large amount of aviation fuel and ammunition. Given that these amphibious assault ships have marine units that can land using helicopters and high-speed armored amphibians, which can cover up to 60 km by sea, over-the-beach unloading appears to be quite irrelevant.

It is necessary to proceed from the fact that due to considerable mine threats or to insufficient seabed slope at the captured bridgehead, heavy machinery that cannot float will, as a rule, have to be transported from landing craft by high-speed assault boats. Given this, Project 02320 landing craft Cossack, developed by KIT-engineering Design Bureau in Nizhny Novgorod and first presented at the International Maritime Defense Show (IMDS-2013) is of particular interest. Unlike the project 11770 Serna amphibious assault ships which are already available to the Navy and that can carry one tank, the Cossack landing craft is designed to carry two T-90A tanks.

Replacing a 25.6-meter long Serna landing craft with a 28-meter Cossack landing craft with a ratio of 1 to 1 in well-docks of promising Lavina LHD, would make it possible to land a tank company at a time. Unfortunately, the Project 02320 designers failed to find a suitable power unit for their ship to make it as fast as the French 27-meter long CTM NG landing craft of the same carrying capacity.

Russia’s Navy expected to get French CTM NG boats along with the Mistral, and the inferior in speed domestic project did not receive the necessary funding. Today, it seems expedient to renew the work on Project 02320, giving designers the task of increasing its speed up to 15-20 knots without decreasing the shipload.

Working for the future

Should such a project of a national ship of this class appear, it can be expected that our multi-purpose amphibious assault ship will be able to deploy multifunction deck-based MiG-29K and MiG-29KUB (double seat) fighters, whose mass production has already been started, as well as deck modification of the 5th generation fighter in the future. Then, the Russian Navy will have not only modern amphibious ships, but aircraft carriers too, the absence of which today hampers notably intensifying joint efforts with the Russian Aerospace Forces in Syria. Full article russiancouncil.ru