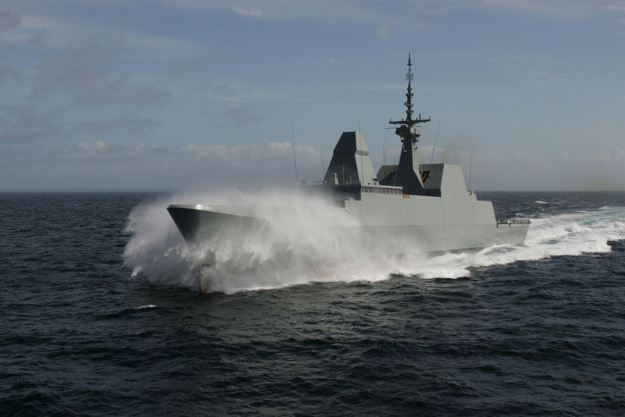 The La Fayette Class incorporates a number of stealth features – the sides of the vessel are sloped at 10° to minimise radar cross section, surfaces have been coated in radar-absorbent paint and the profiles of external features have been reduced.

In January 2011, DCNS won a contract worth $80m to provide through-life support (TLS) services to five French frigates at Toulon naval base. The maintenance contract is for five years from 2011 to 2015.

The French Defence Procurement Agency (DGA) has awarded DCNS a contract to renovate three of the five La Fayette-class frigates (FLF) currently in service with the French Navy.

The renovation work, which will start in 2020, will be performed in Toulon and synchronised with the scheduled overhauls of the frigates.

The first renovated FLF will be delivered in 2021.

DCNS will renew the ships’ platform and the combat systems. Work will include renovation of electronic and IT systems used to manage the vessel’s installations (propulsion, steering gear, power generation…).

Lastly, the La Fayette-class Frigates will be equipped with an anti-submarine capacity, with the integration of a hull-mounted sonar and anti-torpedo countermeasures.

“DCNS thanks the Direction Générale de l’Armement (DGA) for its confidence and welcomes this notification related to the platform and combat system modernization of the La Fayette class frigates,” Nathalie Smirnov, Head of Services at DCNS declared. “These operations are major and have never been realized so far on this kind of frigate. This modernization perfectly enhances DCNS’ role and know-how as integrator and modernizator of many systems on the French Navy’s vessels.” Source navaltoday.com

The combat data system is the Thales (formerly Thomson-CSF) TAVITAC 2000 system and the OPSMER command support system is also fitted.

The ship’s surface-to-surface missile is the Exocet MM40 from MBDA (formerly EADS Aerospatiale). Two four-cell launchers are installed in a midship position between the two masts. The anti-ship missile has a range of 70km and approaches the target in sea skimming mode at high subsonic speed, approximately 0.95 Mach. The 165kg shaped charge warhead has time delayed impact proximity fuses. 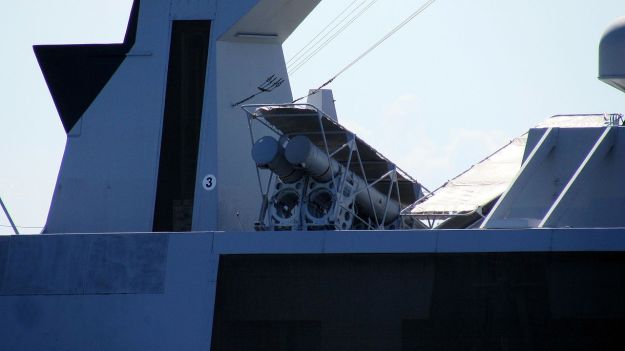 The French Navy has awarded MBDA a contract for the Exocet MM40 Block 3 missile to be deployed on vessels from 2006. The Block 3 missile will have a new turbojet propulsion system which will give a range extended to 180km.

The MM40 Block 3 missile, complete with a Microturbo TRI 40 turbojet engine, began development 2004 and was first tested from a ship in 2010. Improvements to the MM40 Block 3 include internal navigation and GPS upgrades. These updates, combined with a frequency modulated continuous wave radar altimeter, allows for control of the missile’s altitude over various types of terrain. This missile is armed with a 160 kg high explosive/semi-armour piercing warhead and an active radar terminal seeker 9 Additional upgrades include increased evasive capabilities such as the ability to make a 180 degree turn post-launch, allowing the MM40 to evade defense missile systems. These upgraded missiles will be both ship- and ground-launched and will be deployed first onto Forbin (Horizon)-class destroyers and then to La Fayette-class frigates.

The ship’s surface-to-air missile system is the Thales Crotale Naval CN2. The system employs the VT-1 missile with a range of 13km and speed of Mach 3.6. The guidance is by command line of sight with radar and infra-red homing. 24 missiles are carried. The frigates may be upgraded with the vertical launch system (VLS) and Aster 15 missile from Eurosam and associated Thales Arabel fire control radar. Sixteen missiles will be carried. 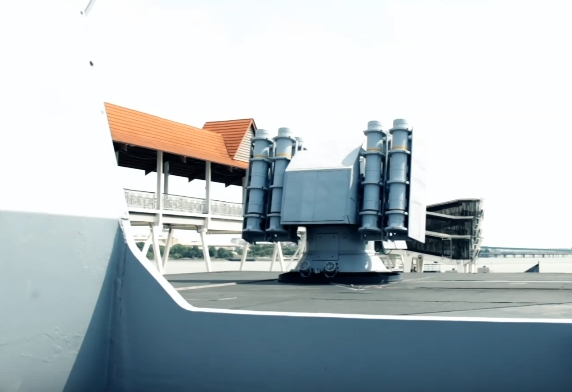 The Crotale EDIR (Ecartométrie Différentielle InfraRouge, “InfraRed Differential Ecartometry”) is an all-weather short-range anti-air missile, which can be used to intercept low-flight anti-ship missiles and aircraft. It has been developed by Thomson CSF Matra and exists in two versions, a mobile land-based version and a ship-launched one.

The SADRAL is a pedestal mounted six round launcher for naval use. SADRAL stands for Système d’AutoDéfense Rapprochée Anti-aérienne Légère, which is French for light short range anti-aircraft self-defence system. The SADRAL is a remotely operated system with three missiles on each side and optronics on top. Source weaponsystems.net

The Mistral is a fire and forget, short range surface-to-air missile designed to engage air threats. The Mistral has been designed to be launched from a wide range of systems such as MCP, ALBI, MANPADS, SIMBAD, ATLAS, SIGMA, SADRAL, TETRAL and ATAM. The Mistral missile is able to engage a supersonic target flying at 3,000 meters of altitude. Mistral is being used for point defense, ship self-defense, defense of mobile units and air-to-air engagements (ATAM). It is provided with an imaging Infrared seeker and a blast fragmentation warhead detonated by a proximity laser fuze. The Mistral 1 is the baseline missile and the Mistral 2 is the improved, most recent, currently in production model. MBDA has produced more than 15,000 Mistral missiles for 25 countries. 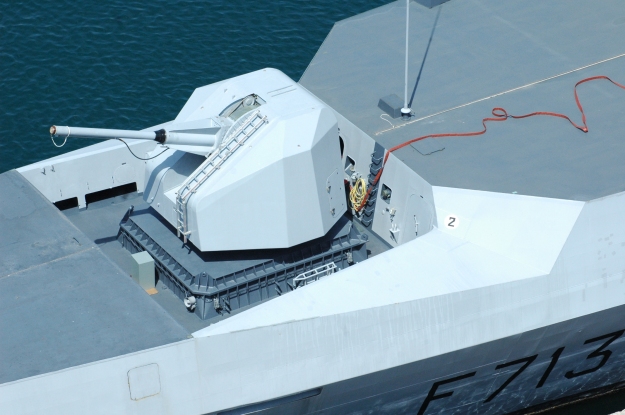 Modern French 100 mm naval guns are multipurpose artillery pieces (anti-air, anti-ship, ground), capable of a high rate of fire. Most modern French warships are equipped with one of its versions. 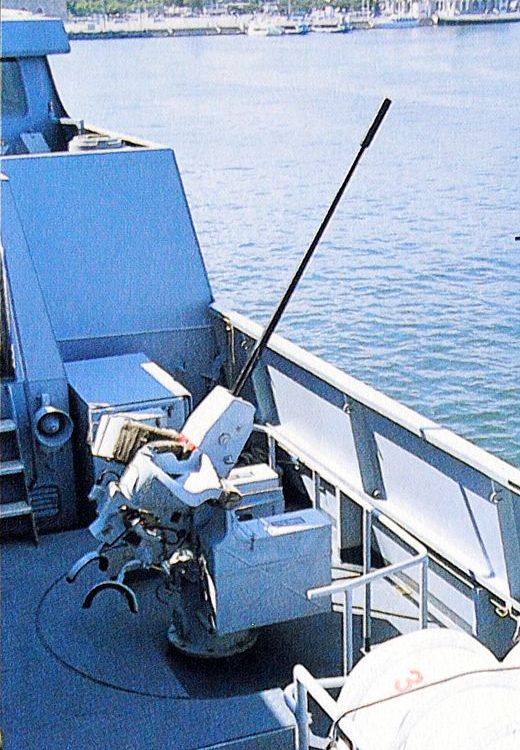 The M621 is a low-recoil gun which has been mainly used on helicopters and small aircraft, but a navalized version was developed in the late 1980s. Recoil is minimized by the use of a muzzle brake and a shock-absorbing mount. 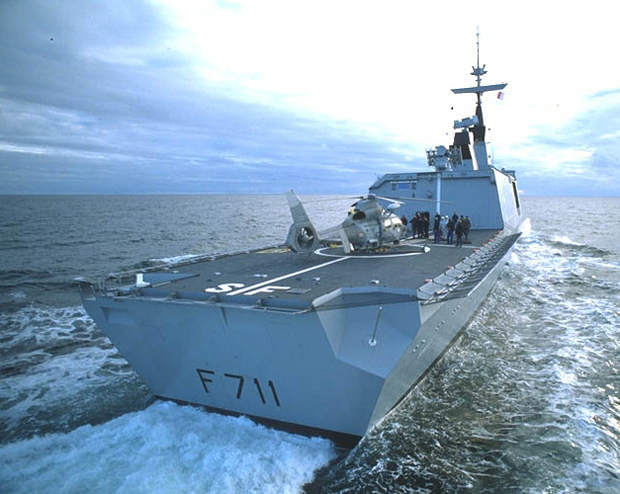 The frigate has a flight deck at the stern with a single landing spot, for use by 10t helicopters such as AS 565 MA Panther, SA 321G Super Frelon or NH 90. The flight deck can be used up to Sea State 6.

To meet a French armed services requirement for a medium transport helicopter, Sud-Aviation flew the prototype SE.3200 Frelon (hornet) on 10 June 1959. Powered by three Turmo IIIB turboshafts, the SE.3200 had large external fuel tanks that left the interior clear for a maximum of 28 troops, and a swing-tail fuselage to simplify cargo loading. However, development was terminated in favor of a larger and more capable helicopter designed in conjunction with Sikorsky and Fiat. What was to become Western Europe’s largest production helicopter emerged with a rotor system of Sikorsky design, and with a watertight hull suitable for amphibious operation. Two military prototypes of the Super Frelon were built, the SA 3210-01 troop transport, and the SA 3210-02 maritime version for the Aeronavale on 28 May 1963.

Four pre-production aircraft were built under the new designation SA 321 Super Frelon. These were followed in October 1965 by production SA 321G anti-submarine warfare helicopters for the Aeronavale. Apart from ship-based ASW missions, the SA 321G also carried out sanitisation patrols in support of Redoutable class ballistic missile submarines. Some were modified with nose-mounted targeting radar for Exocet anti-ship missiles. Five SA 321GA freighters, originally used in support of the Pacific nuclear test centre, were transferred to assault support duties. In 2003, the surviving Aeronavale Super Frelons were assigned to transport duties including commando transport, VertRep and search and rescue.

Six radar-equipped SA 321GM helicopters were delivered to Libya in 1980-81. The SA 321G was also modified for air force and army service. Designated SA 321H, a total of 16 was delivered from 1977 to the Iraqi Air Force with radar and Exocet missiles. These aircraft were used in the Iran-Iraq conflict and the 1991 Gulf War, in which at least one example was destroyed.

The Thales ARBR 21 (DR 3000S) radar warning receiver, operating in D to K bands, is mounted at the top of the main mast. A Thales ARBB33 jammer operates at H, I and J bands.

This radar detector allows the user to be informed in real time of the tactical situation by the identification and precise range and bearing of electromagnetic emissions in the ship’s environment. Source ixarm.com

The DAGAIE launcher comprises 6 or 10 munition containers, each of which is loaded with either IR or chaff rockets.
The firing sequence runs automatically and is triggered on a missile alarm from a variety of sources, such as radar, ESM systems, or optical sights, thus providing a very short reaction time. The firing direction is optimised in accordance with the threat bearing, wind-speed and direction, ship heading and speed data.
The launching of radar and IR decoys is so arranged that advanced mixed-guidance missile systems cannot discriminate between them and thus collocation of both decoys is achieved. The installation is a double mounting and comprises: (a) two trainable mountings carrying 10 replaceable containers (suitcases), each of which is loaded with either IR or I/J-band chaff projectiles.
A wide range of ammunition by Etienne Lacroix Défense provides seduction, distraction and
seduction/dissimulation modes. The electromagnetic decoys are normally based upon aluminised glass fibre chaff with rapid bloom time and they cover the I and J frequency bands. The infra-red decoys cover both the 3-5 and the 8-14 µm bands. 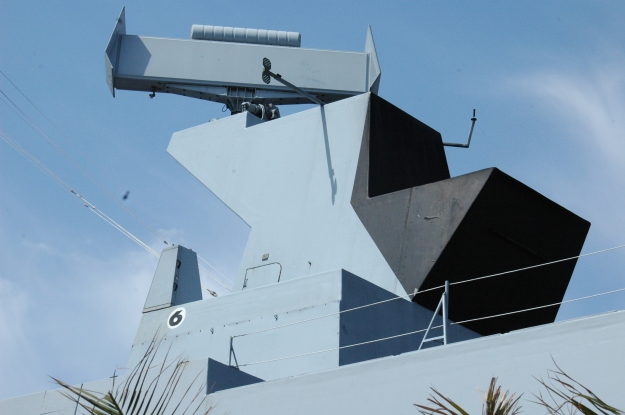 VIGISCAN is a high sensitivity camera for real time infrared panoramic surveillance. The VIGISCAN captures a 360° image in azimuth at a speed of 1 Hz and is ideal for the following applications:

VIGISCAN provides a global and instantaneous vision of the whole security perimeter where an operator would have previously had to orientate cameras manually. Reduced operator burden and increased coverage area that is achieved through the VIGISCAN’s innovative design makes it a cost effective and practical solution for increasing security in any application.  Source owenint.com.au

The propulsion system is a Combined Diesel and Diesel (CODAD) arrangement. The system is based on four SEMT Pielstick 12 PA6 V 280 STC diesel engines, rated at 21,000hp. Two shafts drive controllable pitch propellers. The ship is fitted with a bow thruster. The propulsion system provides a maximum speed of 25kt and, at an economical speed of 12kt, the range is 9,000nm. 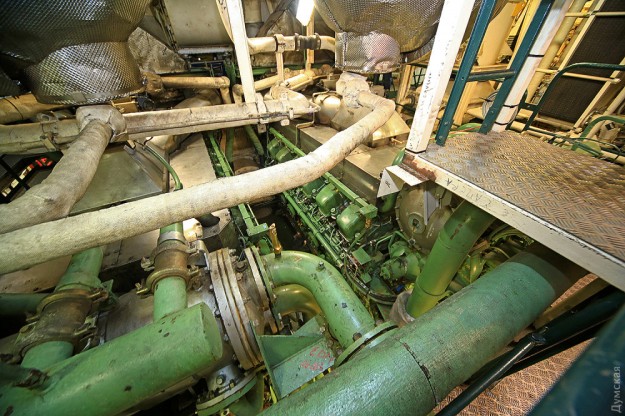