The Israel Aerospace Industries (IAI) conformal airborne early warning and control (CAEW) aircraft was first unveiled in public at the UK’s 2008 Farnborough Air Show. The prime contractor, system developer and system integrator for the CAEW is Elta Systems Ltd, a subsidiary of IAI.

The CAEW aircraft is based on the G550 airframe from Gulfstream Aerospace of the USA. The operationally proven G550 CAEW aircraft is the third generation of airborne early warning and control systems developed by IAI Elta since the mid-1980s. 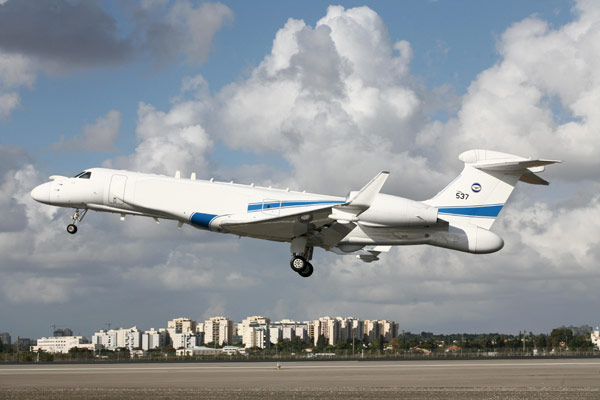 Gulfstream was awarded a contract for four (plus two options) G550 modified aircraft in August 2003. First flight of the modified aircraft was in May 2006 and it was delivered to Elta for the installation of the mission systems in September 2006. The first and second CAEW aircraft were delivered to the Israel Air Force in February and May 2008 and since then have been in operational use.

In Feburary 2009, the Singapore Air Force recieved four CAEW aircraft from Elta Systems. The aircraft, worth $1bn, will replace four aging Northrop E-2Cs currently in service with the air force.

The Singapore Air Force has also ordered a number of CAEW aircraft to be delivered during 2009 and 2010.

The CAEW provides improved performance in terms of higher operating altitude, longer range and increased time on station. The main AEW performance advantages result from the capability to point the radar beams in any direction in space at any time, with the beam’s parameters controlled by the radar computer. The CAEW aircraft is based on the Gulfstream G550 airframe, which is an upgraded variant of the Gulfstream V-SP with improved aerodynamic performance. The aircraft is manufactured at the Gulfstream business jet production centre in Savannah, Georgia, USA and transferred to IAI Elta Systems Ltd in Ashdod, Israel.

Compared to the original G550, the CAEW redesigned aircraft has an increased zero-fuel weight, a modified structure, additional cabling, three (instead of one) power generators and a liquid cooling system to accommodate the mission equipment. One particular specification is the aircraft’s low drag aerodynamic profile.

IAI’s Bedek Aviation is contracted to provide the maintenance and logistic support for the Israeli CAEW aircraft. 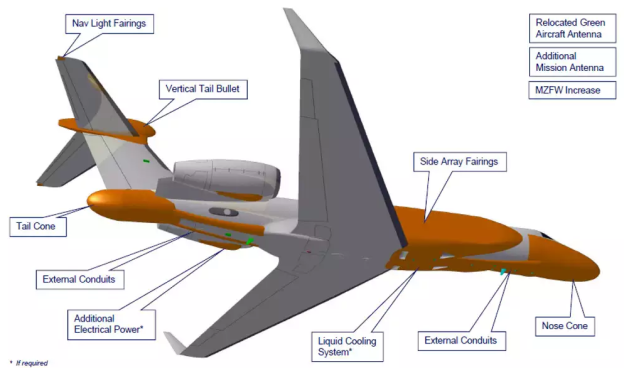 The AEW system has six multi-purpose, Windows-based, operator stations with 24in colour monitors that are installed in the rear half of the main cabin. The forward section of the main cabin behind the cockpit accommodates the electronics. 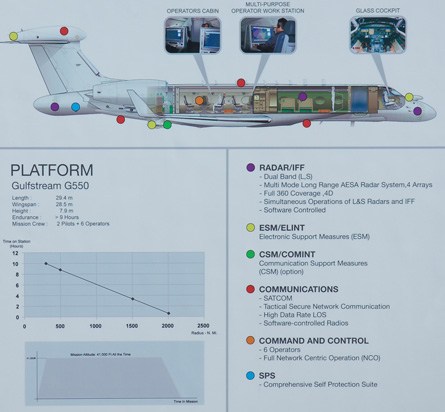 The Elta AEW system provides rapid target acquisition and target information with total 360° coverage. Avoiding host aircraft obstruction is achieved by using the placement of a number of conformal antennae combined with dynamic beam allocation to the targets.

The multiple conformal antennae provide the coverage without the need for a large mushroom-shaped radar system installed on comparable aircraft. 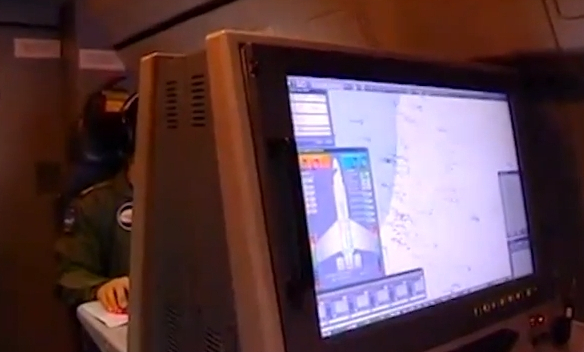 The system is highly automated and uses advanced multi-sensor data fusion techniques to cross-correlate data generated by all four sensors – the radar, IFF, ESM / ELINT and CSM / COMINT. The data is combined with an automatically initiated active search by one sensor for specific targets that have been detected by other sensors. 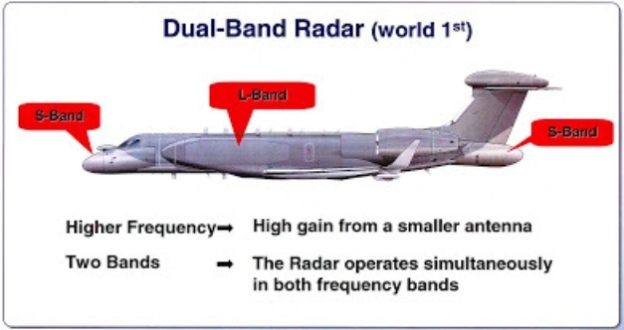 The modes of operation include track initiation, extended detection range mode with long dwell time, and target verification. When a target has been identified as a priority the radar switches to a high scan rate tracking mode with optimised beam to target characteristics. 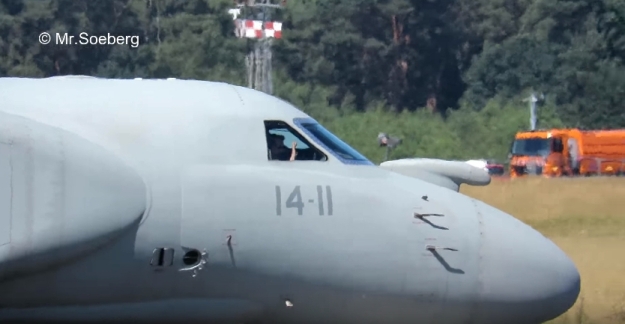 The forward-facing hemisphere radar array and the weather radar are mounted in the nose radome. The lateral arrays are housed in conformal radomes along the sides of the forward fuselage.

The radome located on the tailcone houses the aft facing hemispherical array. 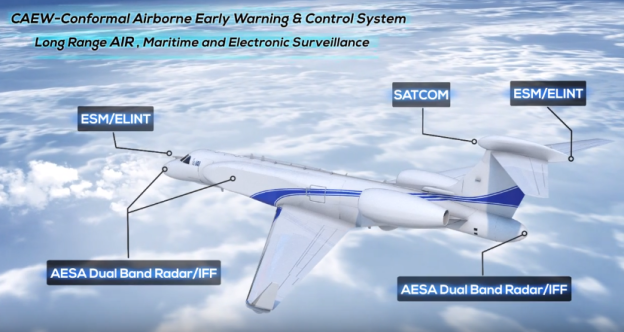 The electronic support measures and electronic intelligence systems use multiple narrow and wideband receivers. The ESM / ELINT also provides the radar warning receiver function and supports the aircraft’s self-protection system. The antenna pods are mounted under the wingtips. An electronic support measures antenna is mounted in a fairing above the nose cone which houses the weather radar. The direction finding function uses differential time of arrival.

The aircraft is fitted with a robust jam-resistant full duplex EL/K-189 satellite communications and datalink. The satellite communications operates at Ku band, 12.5GHz to 18GHz. The satellite antenna dish and one planar array are housed in the vertical tail surface top fairing and another planar array is housed in a ventral blister radome. The antennae are dual axis stabilised with pointing capability. The carrier link can provide voice, data and compressed video.

The aircraft can be fitted with the data link specified by the customer country.

The aircraft is powered by two Rolls-Royce BR710C4-11 turbofan engines rated at 68.4kN and fitted with full authority digital engine control (FADEC). The engines are fitted at the rear of the fuselage. The integral wing tanks have a fuel capacity of 23,400l and the fuel system is equipped with an automatic fuel distribution system to accommodate the changing fuel load during flight.

The aircraft is equipped with a Hamilton Sundstrand electrical power generation system and the CAEW aircraft also has power generators mounted on the engines providing 240kW of power.

Gulfstream was responsible for the design and supply of the liquid cooling system to accommodate the high power consumption of the airborne electronics.

** Stated weights are based on theoretical standard outfitting configurations. Actual weights will be affected by outfitting options and other factors.