According to Business Insider

Slowly but steadily, Beijing has been expanding and developing its military capabilities in the South China Sea.

Over the protests of other countries in the region — particularly Vietnam and the Philippines — China has dredged islands, established runways, installed radars, and deployed surface-to-air missiles throughout the sea.

The following interactive map, from the Center for Strategic and International Studies’ Asia Maritime Transparency Initiative, demonstrates Beijing’s growing strength in the region.

On the map, Beijing declares ownership to everything within its own self-declared Nine-Dash Line. This line thoroughly cuts through the accepted maritime borders of multiple states in the region, including Taiwan, the Philippines, Vietnam, and Malaysia.

However, China claims the majority of the contested region, which is home to $5 trillion in annual global trade.

According to author and the chief geopolitical analyst for Stratfor, Robert D. Kaplan, “the South China Sea functions as the throat of the Western Pacific and Indian oceans — the mass of connective economic tissue where global sea routes coalesce.”

“More than half of the world’s annual merchant fleet tonnage passes through these choke points, and a third of all maritime traffic worldwide,” Kaplan wrote in “Asia’s Cauldron: The South China Sea and the End of a Stable Pacific.”

To that end, the tit for tat over crumbs of land in the South China Sea isn’t for nothing.

These developments have led to a report from CSIS claiming that the South China Sea will be nothing but a “Chinese lake” by 2030. And in mid-February, Beijing took a further step of militarizing the region by placing advanced surface-to-air missiles on a disputed island to solidify its claims.

This militarization of the region, and the potential consequences, has led the former CIA chief Gen. Michael Hayden to claim that mishandling the rise of China “will be catastrophic.”

The Krab (crab) self-propelled howitzer, developed by BAE Systems Land Systems, won international competition to meet future self-propelled artillery systems requirement for the Polish Army. Polish requirement is for 80 howitzers of this type. The first order was expected in 2008. However Polish MoD halted its order due to a possible bribery case. A total of 24 howitzers were ordered. As of 2012 8 howitzers have been built and are in service with the Polish Army. However future of this artillery system is uncertain due to various problems. Indian Army also expressed interest in obtaining these artillery systems.

Turret of the Krab is almost identical to that installed on the AS90 Braveheart. This turret will be license produced in Poland. It is fitted with 155-mm / L52 howitzer, which is compatible with all standard NATO 155-mm ammunition.

The basic design around the new 155 mm SPG came from a 1963 Ballistics Memorandum of Understanding for a 39 calibre ordnance of this caliber, with a baseline projectile standardized to the US M549 rocket-assisted shell. The Vickers howitzer was found compliant to this standard, using the L15 unassisted projectile which allows a range of 24.7 km, but with some specifics. Instead of the more common screw breach, a split sliding block breech with Crossley obturation system was chosen. This allowed the use of bagged charges instead of metal cartridges. The primer magazine contained 18 primers and the standard ammunition was the FH-70 round (L15 HE) while the cheaper M107 is used in training instead. The main gun is capped by a double-baffle muzzle brake.

The howitzer range was 24.9 km (39 cal), and 30 km with the tested 52 cal version and standard charges. The rate of fire was 3 rounds in a 10 seconds burst saturation fire, 6 rounds per minute for 3 minutes or 2 rounds per minute in sustained fire.

The hull was custom-built to support and propel the fully traversing turret. It was made of welded RHA, 17 mm thick on the front glacis, NATO-proven against small arms fire, 14.5 mm armour piercing shells and 152 mm shell fragments.

The Haubicoarmata “Krab” – is a Polish license built “Braveheart” turret married with a K9 Thunder chassis (Huta Stalowa Wola and WB Electronics). It received the “Azalia” BMS. Two prototypes were built in 2001, and after trials accepted for production, with height vehicles delivered in 2008. After this first preserie, production was left in 2014 to korean Samsung Techwin. 120 more vehicles are in order for the Polish army.

The Krab has an automatic projectile loading system and modular charge system. Maximum range of fire is 30 km with standard HE-FRAG projectile and 40 km with rocket assisted. A total of 60 rounds are carried.

Polish Armament Inspectorate contracted ZM Dezamet in Nowa Deba to supply ammunition caliber 155 mm intended for self-propelled howitzer KRAB. Nearly 50 million PLN worth contract for the two thousand HE missiles was included in the conclusion of the negotiations. In this way, 155 mm caliber ammunition officially goes on Polish Army equipment.

The Krab is fitted with polish fire control system, intercom and radios. Vehicle is completed with Danish muzzle reference system, which tracks outgoing projectiles and adjusts the next shot.

According to HSW, the Krab has a burst rate of fire of three rounds in 10 seconds and a maximum rate of fire of 18 rounds in three minutes. A flick rammer is fitted as standard. Minimum range is 4.7 km and maximum range firing an assisted projectile is 40 km. Aiming accuracy in range is 0.50 per cent and in azimuth 0.1 per cent.

The gun commander is provided with a DD-9620 terminal that receives target information from the battery command post. Mounted over the 155 mm/52 calibre ordnance is a muzzle velocity measuring radar that feeds information to the fire-control system. A navigation system is also fitted as standard.

The DD9620T terminals feature a construction that provides resistance to extreme mechanical exposures, occurring in combat vehicles, including vehicles equipped with artillery weapons, and ensures resistance to environmental factors.

Wide range of terminal configuration options – including processor performance, memory capacity and type of interfaces – allows for optimal compatibility of the device with a particular application.

The efficient and convenient operation of the application software is possible via a touch screen and a unique keyboard surrounding the display (in case of the DD9620T base model with a 10 “screen).

The use of removable mass storage device allows for effective implementation of procedures which secure stored data against unauthorized access.

Devices are equipped with a standard FONET system interface  and a headset connector, which allows them to operate as an element of a military vehicle intercom.

Typical applications of the DD9620T terminals include:

The DD9620T terminals are available in a variety of releases

In addition to the internal and external communication system, Krab has a fire-control system that includes a computer to control the turret mechanism, gun layer computer and a ballistic calculation and gun commander computer.

There is also a direct fire sight and a laser range-finder mounted coaxial with the 155 mm armament. An auxiliary power unit is provided for the turret that allows all of the Krab systems to be run with the main diesel engine shut down.

The wish of the Polish side was the equipment chassis armatohaubicy including K9 system and fire-proof, auxiliary power unit APU and suction and filtering system. Fig. Jerzy Reszczyńsk – Image: defence24.pl

Standard equipment on the Krab includes an NBC system, front-mounted dozer blade, fire/explosion detection and suppression system and a laser warning system that is coupled to the two banks of 81 mm electrically operated smoke grenade launchers mounted either side of the turret. Source army-guide.com

PT-91 of the Warsaw brigade @tanks-encyclopedia.com

Vehicle is fitted with a self-entrenching blade. However since 2012 production of the S-12U engine stopped. Another engine was proposed as an alternative. It is German MTU-881 Ka500. However it do not fits in the Krab hull. In 2013 it was reported that Krab will use chassis of the Turkish T-155 Firtina SPH.

MB871 Ka-501 engine, with 1200ps at 2600rpm 8-cylinder version, and MT881 Ka-500 engine, 8-cylinder version, has been locally produced (S.Korea) by STX since the year of 1986 under the manufacturing license from MTU, Germany. These engines are not only best optimized for the military vehicles with its size compactness and lightness but also provided superior operational economics mainly thanks to the comparably lower fuel consumption rate, longest MTBO and well-organized logistics system. Source army-guide.com

However in 2014 it was reported that Poland plans to acquire 120 tracked chassis of the South Korean K9 self-propelled howitzer. Actually the T-155 is a license-produced version of the K9.

The wish of the Polish side was the equipment chassis armatohaubicy including K9 system and fire-proof, auxiliary power unit APU and suction and filtering system. Fig. Jerzy Reszczyński – Image: defence24.pl 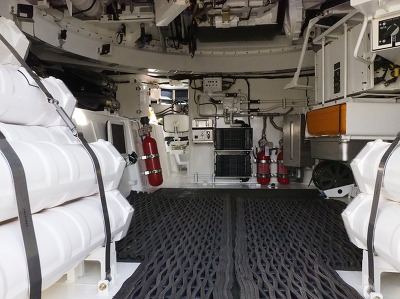 It is likely that it appeared more reasonable to import chassis directly from South Korea. First chassis was completed in 2015. It is planned that 36 units will be produced in South Korea and the rest 84 in Poland.