Izumo-class, the largest surface combatant in Japan, was put into service with the Japanese Maritime Self Defence Force (JMSDF) in March 2015. The Izumo Class destroyer ships replace the Hyuga-class destroyers, which were commissioned in March 2008.

The vessels can be used for multiple purposes, including anti-submarine warfare, command-and-control operations, humanitarian aid and disaster relief operations, as well as to protect Japanese territories in the East China Sea.

Japan Marine United Corporation, which was created by the integration of two companies, Universal Shipbuilding and IHI Marine United, custom-built the two Izumo-class ships at the Yokohama shipyard. The construction of Izumo-class destroyer was conceptualised by the Japanese Ministry of Defense (MOD) in November 2009. JMOD received a budget of 118.1 billion yen for the fiscal 2010 for the construction of a helicopter destroyer.

Construction of the first ship in the class, JS Izumo (DDH-183), began in 2011 at Yokohama shipyard. Its keel was laid down in January 2012 and the vessel was launched in August 2013. It was commissioned at Yokosuka port in Japan in March 2015. Investment on the vessel amounted to approximately ¥120bn ($1.01bn).

Although a Japanese naval vessel may be retrofitted to carry fighter jets, the ruling parties will call the Izumo a “multi-purpose operation destroyer” to avoid criticism that use as an aircraft carrier would violate the pacifist Constitution.

Members of the ruling parties’ working team on revising the National Defense Program Guidelines, which the government expects to approve later this month, reached a consensus on what to call the Izumo-class destroyers during a meeting on Dec. 5.

The Abe administration has been considering retrofitting the Maritime Self-Defense Force’s Izumo into an effective aircraft carrier that can deploy U.S.-made F-35B stealth fighter jets, which can take off and land vertically.

However, an issue on how to maintain compatibility of the use with the war-renouncing Article 9 of the Constitution will likely remain a problem with the Izumo becoming a de facto offensive aircraft carrier, the first in the Japanese fleet.

The 248-meter-long vessel would be reliant on its complement of F-35Bs, resulting in exceeding the defensive nature as specified in the Constitution.

In the meeting, Defense Ministry officials explained the plan of thickening the decks of two Izumo-class destroyers, which carry helicopters, and making other adjustments so that F-35Bs can be launched from there, according to a source who attended the meeting. Source asahi.com

The following is the gist of the new National Defense Program Guidelines and the fiscal 2019-2023 midterm defense buildup program approved by the Cabinet on Tuesday. Japan: 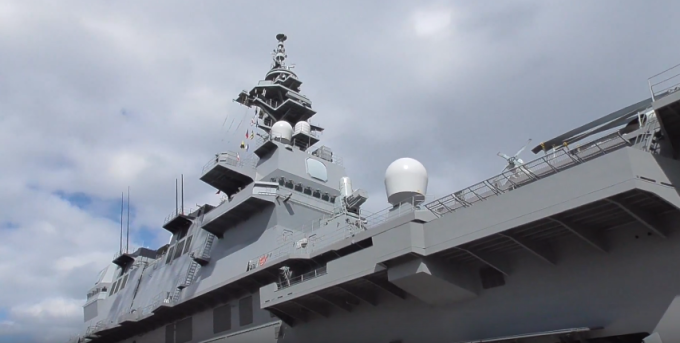 The island structure, including the platforms, with five levels, is about around 70m long. Like the Hyuga class, considerable attention has been paid to reducing signatures. The 243m flight deck allows for relatively unimpeded aircraft movement and is able to simultaneously operate five helicopters. Weapons, except for the forward CIWS on the starboard side of the flight deck, are mounted on hull sponsons or the island structure. Another notable difference from the Hyuga class is the aft 14m x 15m deck edge elevator on the starboard deck edge behind the island structure. The forward 20m x13m elevator remains on the centreline as on the Hyuga class. There are three small elevators for weapons and supplies, two forward, one aft. Source rina.org.uk

Japan’s cabinet has approved a major additional purchase of 105 F-35s to add to the 42 aircraft already on order. Significantly, the number includes 42 of the F-35B STOVL (short takeoff, vertical landing) version, which will operate from island bases along Japan’s western seaboard and two converted Izumo-class helicopter carriers. Japan also approved work to modify the vessels, Izumo and Kaga, to operate up to 10 F-35Bs each—including deck strengthening. The announcement confirms Japanese press reports that have been circulating since earlier in the year. Source thaimilitaryandasianregion.blogspot.com

Japan has not had fully fledged aircraft carriers since its World War Two defeat in 1945.

The Izumo-class destroyer has a length of 248m, beam of 38m, draught of 7.5m and depth of 33.5m. Its displacement is 19,500t when empty and 27,000t when fully loaded. It can complement 970 crew and troops, and as many as nine helicopters including seven anti-submarine warfare (ASW) helicopters and two search and rescue (SAR) helicopters. 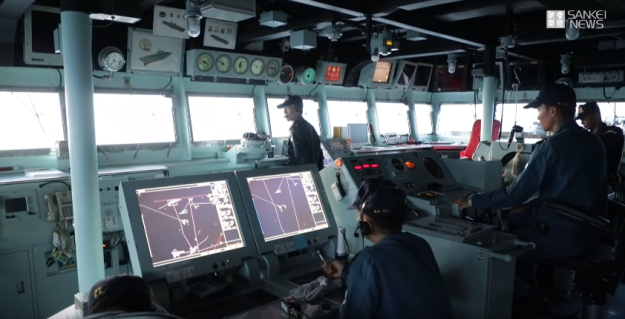 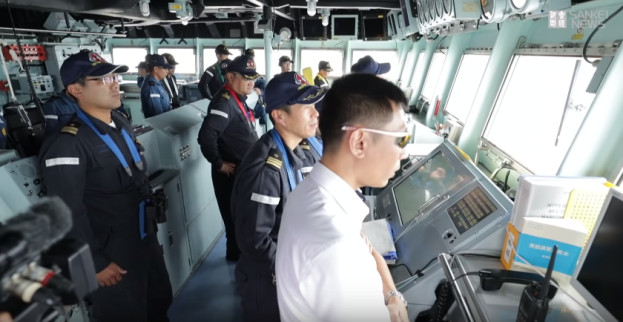 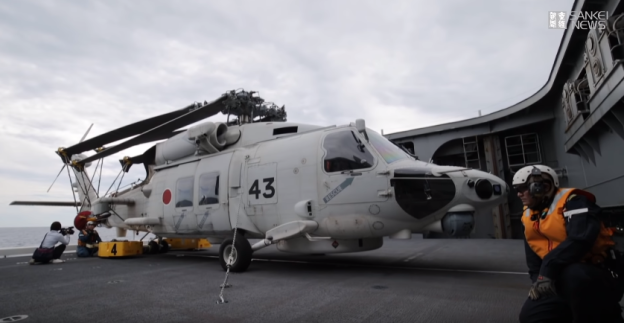 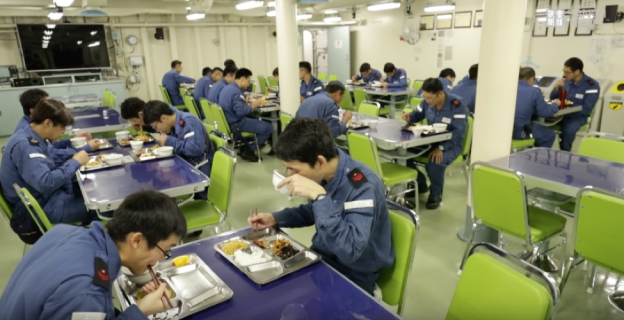 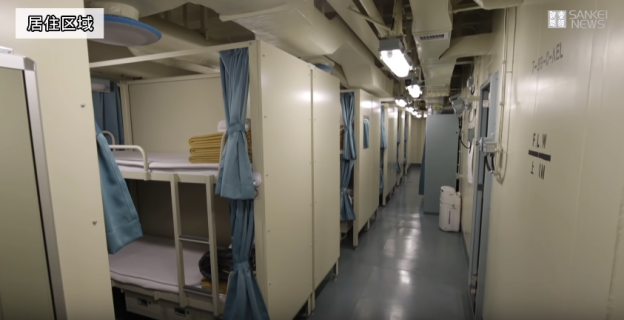 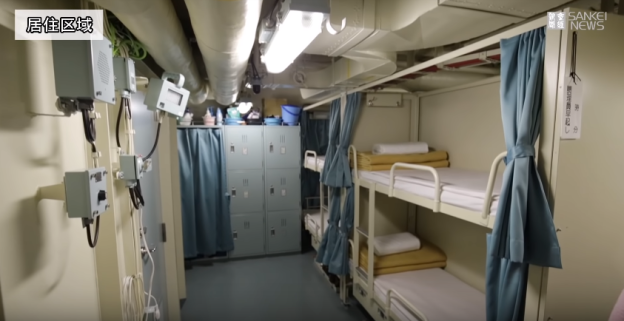 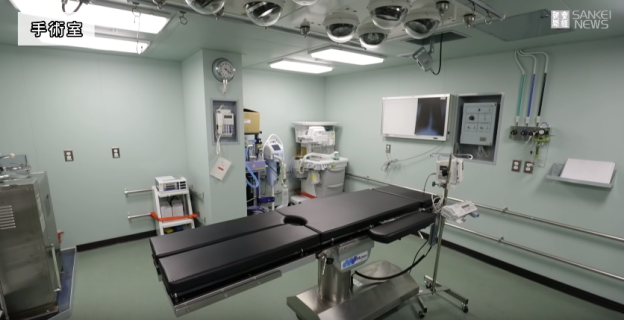 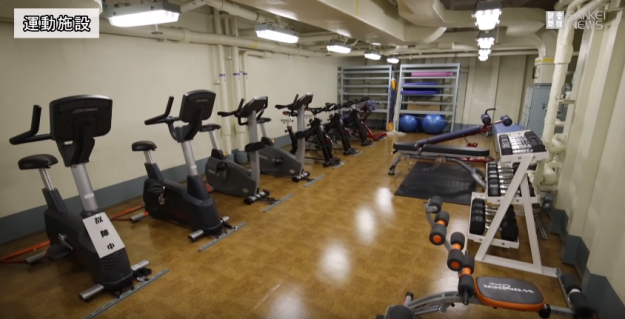 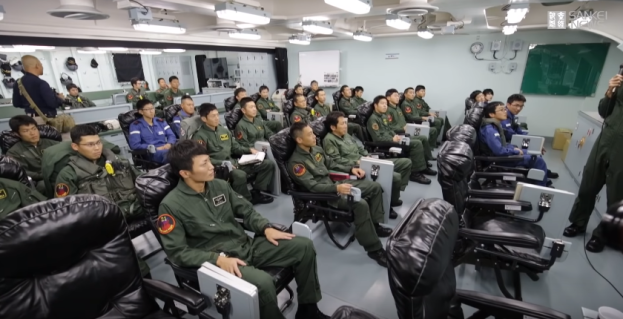 The destroyer features a spacious flight deck that can accommodate five helicopters to take off and land simultaneously. It also includes roll-on and roll-off ramp, and interior space for up to 50 vehicles. 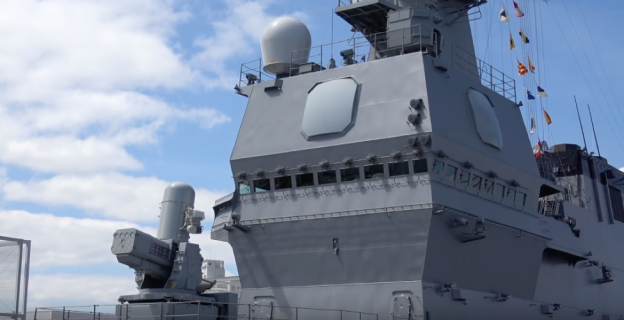 FCS-3 is an integrated naval weapons system developed by the Japanese Defense Ministry for the Japan Maritime Self-Defense Force.

This system is composed of weapon-direction and fire-control subsystem and multi-function radar subsystem. The multi-function radar subsystem adopted active electronically scanned array (AESA) technology, and there are two sets of antennas: the larger one is a C-band radar for surveillance and tracking, the smaller one is a X-band radar as a fire-control radar.

After a prolonged sea trial on board JS Asuka, this system was introduced in 2007 on the JS Hyūga (DDH-181). The enhanced version, FCS-3A, was employed on the Akizuki-class destroyers., and limited-function version, OPS-50, was also delivered for the Izumo-class helicopter destroyers. The fire-control function are omitted in the OPS-50 system, so they have only one set of antennas operating C-band. Source wikipedia.org 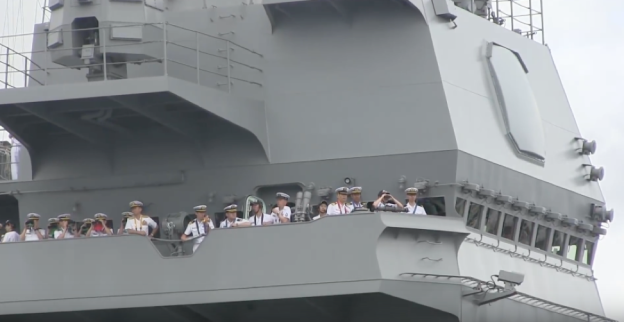 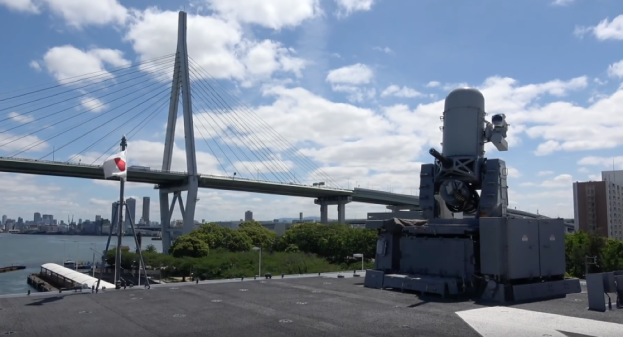 The RAM Block 2 is an upgraded version of the Rolling Airframe Missile (RAM) ship self-defense missile system. The RAM Block 2 missile upgrade aim is to more effectively counter the emerging threat of more maneuverable anti-ship missiles. The US Navy awarded Raytheon Missile Systems a $105 million Block 2 RAM development contract on May 8, 2007, with the missile development expected to complete by December 2010.

The Block 2 upgrade includes a four-axis independent control actuator system and a redesigned rocket motor. These upgrades increase the RAM’s effective range and deliver a significant improvement in maneuverability. The improved missile also incorporates an upgraded passive radio frequency seeker, a digital autopilot and engineering changes in selected infrared seeker components. The US Navy took delivery of the first batch of RAM Block 2 weapons in August 2014 and declared IOC in May 2015.

The MK 44 guided missile round pack and the MK 49 guided missile launching system, which hold 21 missiles, comprise the MK 31 guided missile weapon system. The system is designed to be easily integrated into many different ships. A variety of existing ship sensors can readily provide the target and pointing information required to engage the anti-ship threat.

The MK 44 missile is also used in the SeaRAM® anti-ship missile defense system, replacing the M601A1 Gatling gun in the Phalanx® close-in weapon system with an 11-round launcher. The Phalanx system’s sensor suite and internal combat management system reduces dependency on the ship’s combat system and enables a fast reaction to stressing anti-ship missiles. The RAM Block 2 missile has been successfully fired from a SeaRAM system. Source raytheon.com

Decoy employment is used primarily to defend against anti-ship missiles which have avoided detection and penetrated to the terminal-defense area that represents an imminent threat to ownship. The MK 36 Super Rapid Bloom Offboard Countermeasures (SRBOC) Chaff and Decoy Launching System is an evolutionary development of the RBOC family with enhanced capability. The MK 36 is a deck-mounted, mortar-type countermeasure system that may be used to launch an array of chaff cartridges against a variety of threats. The purpose of the system is to confuse hostile missile guidance and fire control systems by creating false signals. The launching system is controlled from the Combat Information Center and is dependent on information provided by the detection and threat analysis equipment on the ship.

The DLS MK 36 Mod 12 is a morter-tube launched decoy countermeasures system that projects decoys aloft at specific heights and ranges. Each DLS launcher includes six fixed-angle (elevation) tubes: four tubes set at 45 degrees and two tubes set at 60 degrees. Decoy selection and firing is controlled from either the EW console of the bridge launcher control. The DLS launches the following types of decoys: SRBOC – which uses chaff to deceive RF-emitting missiles/radars, NATO Sea Gnat – which is similar to SRBOC but with extended range and a larget payload of chaff, and TORCH – which uses heat to deceive infrarad-seeking missiles. Source fas.org 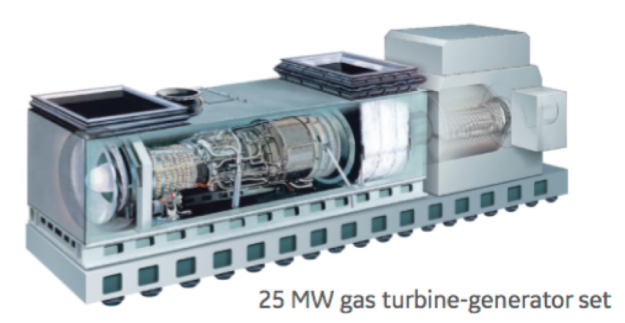