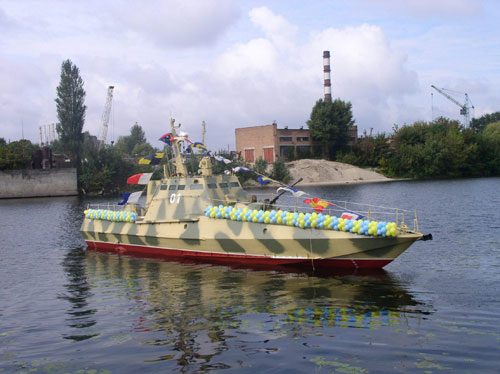 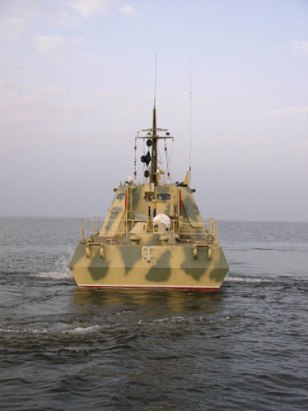 THE BASIC SIZE AND CHARACTERISTICS:

The boats are designed by State Research and Design Shipbuilding Centre (SRDSC) of Ukraine and being built by PJSC Leninska Kuznya Plant, headquartered in Kiev, Ukraine.

They are intended to conduct patrols in harbours, rivers, lakes, territorial waters and isolated areas. Other missions include protection of borders and river ports of Ukraine, assistance to aircraft or vessels in distress, and combating illegal migration, piracy and smuggling in the Danube river and the waters of the Black Sea-Azov basin.

The boats can also be deployed in UN peacekeeping missions.

Keels for the first two armoured artillery boats in the Project 58155-class were laid in October 2012, after which the project was frozen for approximately two years.

The Ministry of Defence of Ukraine awarded a state contract to PJSC Leninska Kuznya Plant to resume the construction of the two boats in October 2014. The vessels were launched in November 2015.

The overall length and beams of the boat are 23m and 4.8m respectively and the maximum draught is 1m. The boat has a full load displacement of 54t and is manned by five crew members.

An integrated bridge system located in the wheel house provides a centralised monitoring of onboard sensors, electronics, propulsion system, and navigation and communications systems.

The boats can also be fitted with weapons and sensors as per the customer’s requirements.

The forward and aft sections of the boat are fitted with a BM-5M.01 Katran-M remote-controlled naval combat module, manufactured by Mykolayiv Mechanical Repair Plant. Each turret is fitted with two 30mm automatic grenade launchers.

Equipped with a tandem warhead, the ATGM can engage targets at a distance between 100m to 5,000m.

An electro-optical fire control system is located atop the bridge for surveillance and monitoring of sea surface. The boat also features a navigation radar, antenna masts, and communications systems. A laser range finder is installed to detect and track targets.

*Note not much details I can find

Powered by two diesel engines, the Project 58155-class can sail at a maximum speed of 25kt and reach up to a range of 900nm at 12kt. It can travel up to 50mi off from the base port and stay afloat for approximately 120 hours.