Russia’s Splav Scientific Production Concern has confirmed that it has developed a new generation 220 mm unguided rocket for use with the TOS-1A 220 mm (24-round) rocket system currently deployed by the Russian Army.

Cutaway model of the Splav Scientific Production Concern 220 mm MO-1.01.04M unguided rocket showing the blunt nose with the thermobaric warhead to the immediate rear, which takes up about two-thirds of the rocket, and with the propellant at the very rear. The three rockets above are for use with the widely deployed 122 mm BM-21 (40-round) rocket system. (Christopher F Foss)

In Russian Army service the TOS-1A 220 mm (24-round) rocket system is referred to as the Solntsepek heavy flamethrower system.

The new 220 mm unguided rocket has the same dimensions as the currently deployed 220 mm MO-1.01.04M rocket but features a more effective thermobaric warhead as well as increased range out to 10,000 m. The MO-1.01.04M rocket has a stated maximum range of 6,000 m, which in some tactical situations means that the TOS-1A system can fall within the range of threat weapons, including some of the longer range anti-tank guided weapons. With the new 220 mm rocket, the TOS-1A system will be able to engage targets from a greater distance, which increases its survivability against direct fire threats.

IHS Jane’s understands that the new 220 mm rocket has a new thermobaric (fuel air explosive) warhead mixture and a new type of solid propellant, which has enabled an increase in range without increasing the overall size of the rocket. New thermobaric warheads have also been developed for use with the Splav Scientific Production Concern 300 mm BM 9A52 (12-round) Smerch multiple rocket system. These include the 300 mm 9M55S unguided rocket with a maximum range of 70 km and the latest 9M530 unguided rocket, which has a maximum range of 90 km.

END_OF_DOCUMENT_TOKEN_TO_BE_REPLACED

The AW149 is a 7t to 8t class multirole helicopter for military and paramilitary use. The helicopter has a maximum cruise speed of 278km/h (150 knots) and a hover altitude ceiling of over 6,000ft at maximum all up weight. The AW149 can carry up to 18 troops and has a range in excess of 920km. Heavy-duty retractable wheeled landing gear allows the aircraft to both ground taxi and operate from rough terrain.

AgustaWestland announced the launch of the AW149 multirole helicopter in June 2006 at the Farnborough Air Show. The design fits between the 6.4t AW139 and the 10.6t NH90 in the AgustaWestland product range.

The AW149 has a five-bladed main rotor of diameter 14m and a four-bladed tail rotor. The rotors are ballistic tolerant. The first flight was completed in November 2009 and the second prototype completed its maiden flight in February 2011. The helicopter made its first public appearance at the Paris Air Show in June 2011. It is expected to achieve type certification by 2014.

Leonardo believes it is close to securing a launch deal for its AgustaWestland AW149 super-medium-class helicopter, which is displayed at Farnborough for the first time in a new armed configuration.

HeliHub.com can exclusively announce that Leonardo appear to have made their first AW149 sale, with an aircraft for the Royal Thai Army now being test flown.  Seen in Marco Bianchi’s photo here, which he has given us permission to use, the Thai military flash is seen on the tail of this otherwise anonymous aircraft.

In the battlefield support role, the AW149 provides unobstructed cabin space (3m long, 2.26m wide and 1.45m high) plus a baggage compartment, and can accommodate 18 troops or 12 fully equipped soldiers. The 2,720kg rated external cargo hook allows heavy equipment to be transported to and from the battlefield.

In the combat search and rescue (CSAR) role, the helicopter is crewed by two pilots and two or four crew members. A rescue hoist and other CSAR mission equipment and armaments are fitted.

Guided rockets from FZ and Roketsan

The FZ guided rocket closes the gap between the long-range high-value missiles and the shorter range gun and unguided rockets, thus affording a full range of precision effects from a platform.

This rocket complies with the armies’ requirement for precise and reliable ammunitions capable of reducing exposure to danger and avoiding collateral damage which nowadays causes injuries to civilians.

The FZ275 LGR provides the end user with substantially decreased cost per kill :

2.75” Laser Guided Missile CİRİT was designed for the purpose of filling the gap between cheap, unguided rockets with low precision and the high cost, guided anti-tank missiles.

CİRİT can be fired from standard CİRİT POD developed by Roketsan and as well as from Smart Pod. Smart Pod increases the capability envelope of CİRİT missile for inventory information exchange through the platform it possess prior to launch.

CİRİT, by means of its aerodynamic shape and composite solid propellant rocket motor, has the longest range in its class, 8 km, as compared to classic 2.75” unguided rockets. 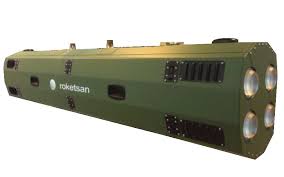 FN has developed a broad spectrum of machine gun pods designed for rotary-wing and subsonic fixed-wing combat aircraft capable of carrying the FN® M3P .50-caliber machine gun and multiple 2.75″ air-to-ground rockets with the FN® RMP variant. FN Pod Systems provide war fighters with a significant firepower advantage in every operational engagement and are in use by a number of NATO nations on both subsonic fixed and rotary-wing combat aircraft.

The cabin can be fitted with window-mounted 7.62mm general-purpose machine guns. The helicopter is equipped with defensive aids subsystems.

The term “Vulcan” was originally the GE Project Name for the first Gatling-type electric-powered minigun and is now a slang term for all of these electric Gatling guns.

The cockpit accommodates the pilot and co-pilot, is night-vision compatible and is fitted with dual controls. The cockpit has crew doors on both sides.

A weather radar can be installed in the chin pod. The helicopter is also equipped with an emergency locator and a personal locator system.

The cabin and the cockpit are air-conditioned. The cabin is 25% larger than that of the AW139 and can accommodate up to 16 troops with light equipment or 12 fully equipped troops. The cabin is fitted with a large sliding door on each side for fast embarking and disembarking. The helicopter can be fitted with a 272kg electric rescue hoist with a utility hoist light on the starboard side for rescue operations.

The helicopter is fitted with a fast roping kit for fast insertion of troops where it is unsafe or inappropriate for the helicopter to land and take-off.

Agusta Westland, a Finmeccanica company, has selected the e-APU60 of Microturbo (Safran group), a new concept of auxiliary power unit specially designed to meet the requirements of new-generation aircraft which will need more electrical power, to be installed on the AW149, new-generation medium class multi-role helicopter. Source safran-power-units.com

The technologies and architecture retained for this new APU significantly optimize its performance and efficiency. Covering a wide range of power ratings, from 20 to 120 kVA, the e-APU family offers significant benefits, in particular the best power-to-weight ratio and dimensions in its category, reduced fuel consumption and improved endurance and reliability, which also mean a very competitive cost of ownership.

With its versatile gearbox, the e-APU can be adapted to different power configurations and electrical systems.

The gearbox can accommodate a wide range of DC or AC starter generators, particularly 28, 115 and 270 VAC units.

Through customized design, the e-APU gearbox is capable of simultaneously driving any starter generator and alternator combination.

The e-APU has impressively low pollution and noise emission levels, which are below current requirements and anticipate future standards. Source safran-power-units.com

In harmony with the AgustaWestland product strategy, GE Aviation is developing the 2,000 SHP class CT7-2E1 commercial turboshaft engine to power the recently-announced commercial AW189 helicopter as well as its military AW149 variant.

The latest version of the highly successful CT7 family is being designed with an emphasis on low-fuel consumption, low cost of operation and with other technical features to ensure the aircraft requirements of long-range, high speed and “Cat. A” performance.