UH-60M Black Hawk is a medium-lift, rotary-wing helicopter designed and manufactured by Sikorsky Aircraft to meet evolving warfighting needs. It is a modernised version of the UH-60 Black Hawk helicopter. 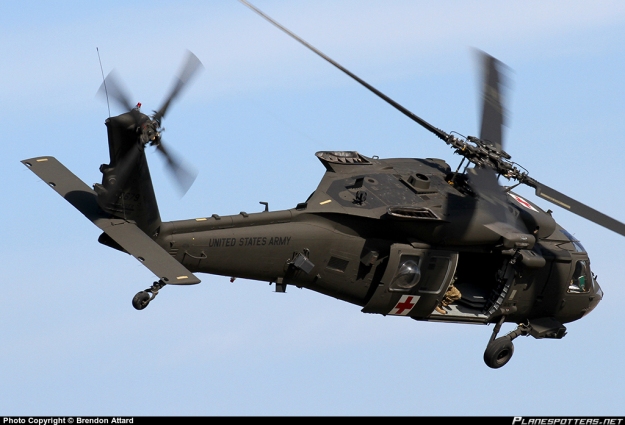 The US Army deployed UH-60Ms in support of combat missions in Iraq and Afghanistan. As of July 2012, Sikorsky had delivered 400 UH-60M utility helicopters and around 956 helicopters are scheduled to be delivered through 2026. 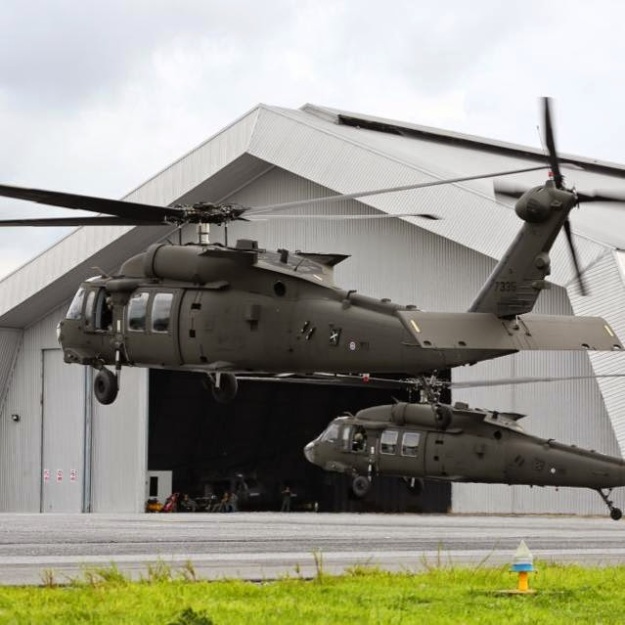 In April 2014, the Government of Mexico requested a possible foreign military sale of 18 UH-60Ms and associated equipment at an estimated cost of $680m.

The UH-60M Black Hawk helicopter features a monolithic design and offers better handling qualities and active vibration control. It is attached with a three-point dual energy absorbing landing gear and foldable main and tail rotor blades that are protected from ballistic damage. It can execute missions during day or night in all-weather conditions.

The helicopter features machined cabin structure, two jettisonable cockpit doors, and two sliding cargo doors with pop-out egress windows. The cabin is 3.8m long, 2.3m wide and 1.3m high, and features crashworthy seats for the pilot and co-pilot. The cabin and baggage volumes are 11.2m³ and 0.5m³ respectively. The maximum gross weight of the helicopter is 9,979kg.

Straight forward design enables rapid configuration change to fit mission requirements. Utilizing the BLACK HAWK aircraft, mission planners can maximize assets by moving them where and when they are needed most. Troop seats are removed in minutes for transporting cargo and supplies. Increase aircraft capabilities by selecting fully developed mission equipment that is easily removed when it’s temporarily not needed. No airframe modifications are necessary. BLACK HAWK helicopter: no limits, only solutions. 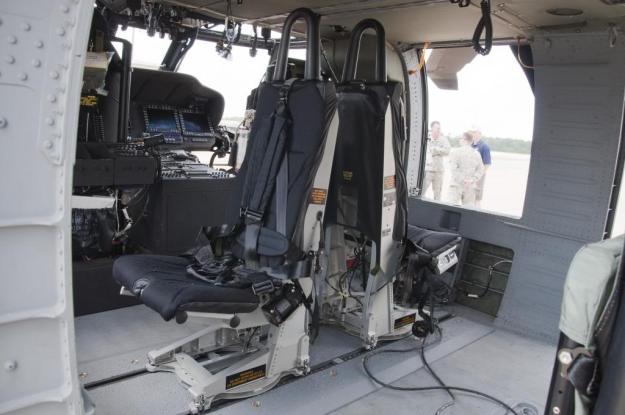 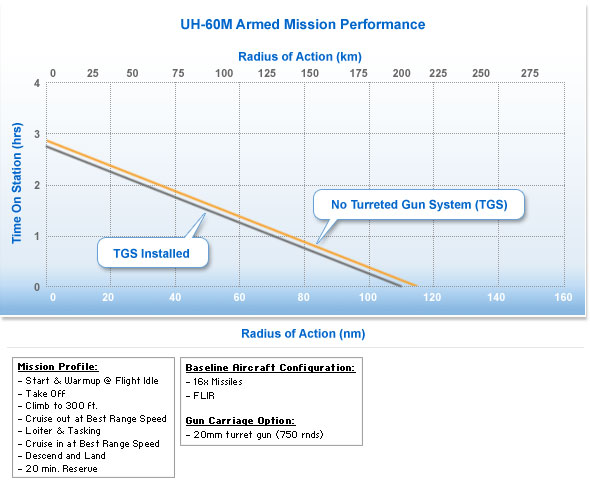 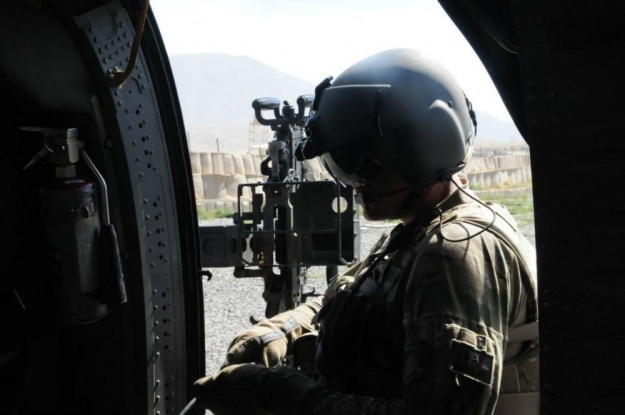 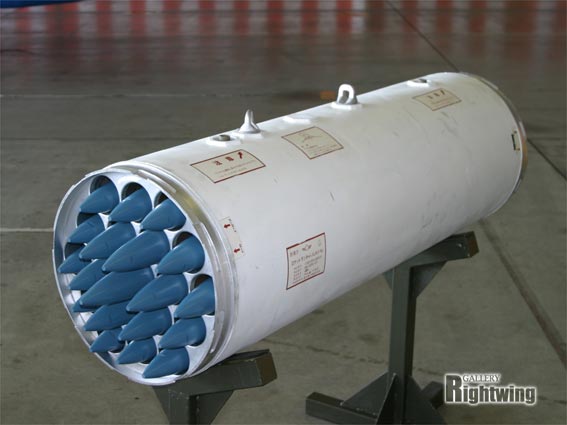 The family of Hellfire missiles includes, but is not limited to, AGM-114 B/K/K2/K2A/M/N/N-5/P/P+/R variants. These variants include shaped charge warheads (B/K/K2/K2A) for use against armored targets and blast fragmentation warheads (M/N) for use against urban structures. The AGM-114N is a thermobaric blast fragmentation warhead that maintains the capability provided by the AGM-114M while adding a unique capability against confined compartmented spaces, a typical target type observed in current combat operations. Other variants include the AGM-114 K2A which has a blast frag sleeve for use against soft-skinned tactical vehicles, the N-5 which provides a trajectory shaping capability to increase endgame lethality against vertical structures, the AGM-114P/P+ variants which include high-altitude launch trajectories for use from fixed-wing aircraft (such as the KC-130J Harvest HAWK), and the R which can be used against all Hellfire targets with a single warhead.

The latest Hellfire variant is the AGM-114R multi–purpose Hellfire II missile, (aka Hellfire Romeo). According to the U.S. Army, the AGM-114R will replace all other Hellfire II missile configurations (K/N/M/P). The AGM-114R consolidates the capabilities of all previous Hellfire missile variants. It is equipped with semi–active laser (SAL) seekers into a single missile capable of defeating a broad range of targets. The AGM-114R can be launched from multiple air, sea and ground platforms, autonomously or with remote designation. From pre-launch to detonation, the AGM-114R employs a range of technological improvements that boost its effectiveness and utility. The AGM-114R features a three–axis inertial measurement unit, which enables properly equipped launch platforms to engage targets to the side and behind without maneuvering into position. The AGM-114R can be launched from higher altitudes than previous variants due to its enhanced guidance system and improved navigation capabilities. A new multi–purpose warhead enables the missile to defeat hard, soft and enclosed targets, which allows pilots to engage many targets with a single Hellfire loadout. The Army is currently only purchasing this variant. 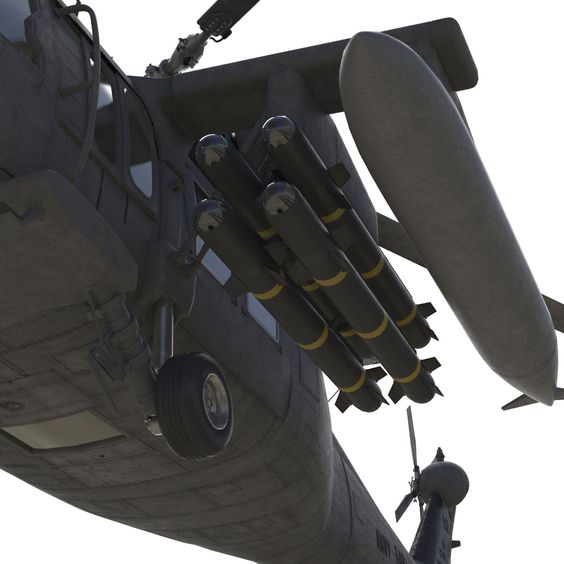 The UH-60M model offers a SAR cabin that enables operators to complete their difficult task in the most efficient manner with enhanced safety. This is critical to the success of your mission. BLACK HAWK helicopters are mission ready.

Cockpit of the UH-60M 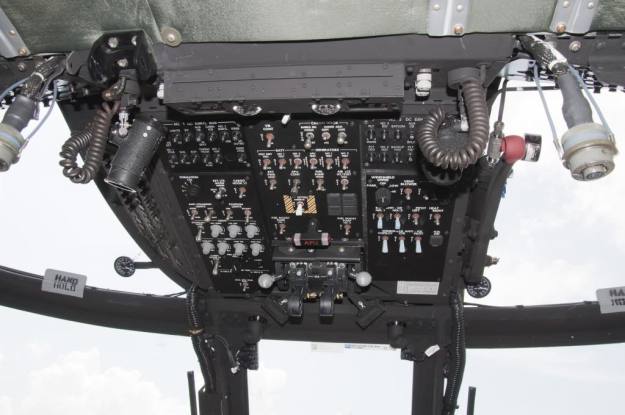 The U.S. Army has selected Rockwell Collins to service the MFD-268C4 multi-function display (MFD) units for its UH-60M Black Hawk fleet under a five-year firm-fixed-price, indefinite delivery, indefinite quantity contract. This is a follow-on contract that continues the Army’s relationship with Rockwell Collins for long-term support of the program.

“Whether the displays are in need of an upgrade, repair or modification, this agreement provides Army UH-60M operators peace of mind that we’ll get them operational as soon as possible,” said Thierry Tosi, vice president and general manager, Service Solutions for Rockwell Collins.

The MFD-268C4 displays will be repaired in Rockwell Collins’ Atlanta Service Center. The Service Center processes 1,300 customer goods per month, consisting of 450 different equipment types from 550 different customers. The equipment that is repaired, modified and upgraded ranges from displays, flight controls, weather radar and navigation equipment to Flight Management Systems and communications equipment. The Service Center was established in 1975 and services the Air Transport, Regional, Government and Military markets.

The firm-fixed-price contract covers repairs and service bulletins for MFD-268C4 displays in all of the Army’s UH-60M Black Hawks including those used by UH-60M foreign military sales customers. Dated 10 Oct, 16 Source helihub.com 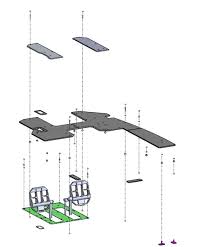 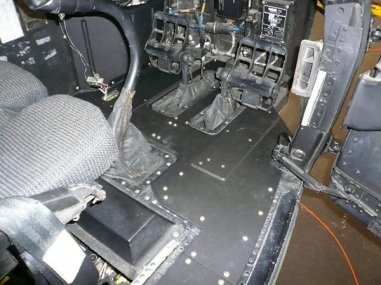 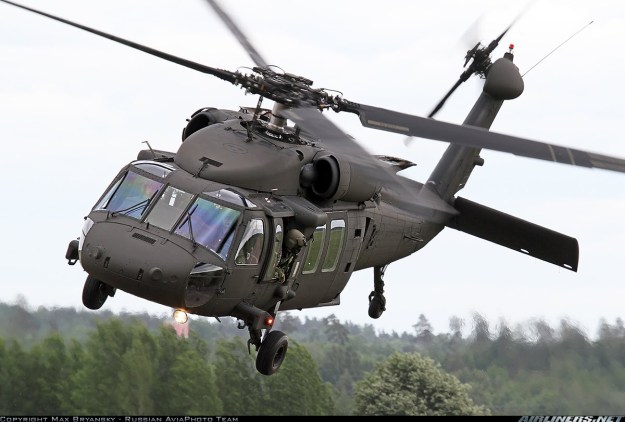 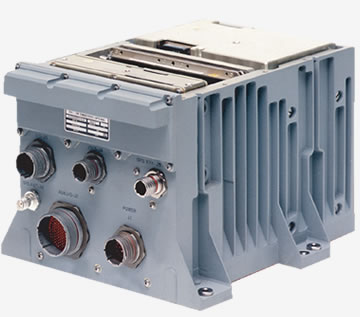 The AN/ARC-231(V)(C) Skyfire Radio System, based upon the RT-1808A/ARC-231(V)(C) Receiver Transmitter is a fully compliant, high performance, fully qualified, low risk solution for any airborne platform. 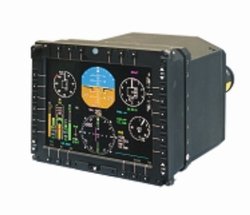 Sikorsky Aircraft Company has given Charlotte-based Goodrich Corporation the nod for a long-term contract to provide an Electronic Standby Instrument System for the U.S. Army’s fleet of over 1,200 Black Hawk aircraft. The addition of this equipment is part of an upgrade of the fleet to the UH-60M helicopter and will also include Goodrich’s Emergency Power Supply and Stormscope lightning detection system.

Displaying lightning information at ranges out to 200 nmi, the Stormscope WX-500 is designed to interface directly with the Collins MultiFunction Display. Operating in a passive detection mode, the Stormscope locates thunderstorm activity by analyzing the radiated signals of electrical discharges from storm cells. Its ability to determine both azimuth and range is made possible through complex algorithms. These provide the reference information for the Stormscope to analyze the unique characteristics of the signals, their strength and their varying rates of recurrence. This information is then processed to determine the location and intensity of dangerous thunderstorm cells. Source aero-news.net 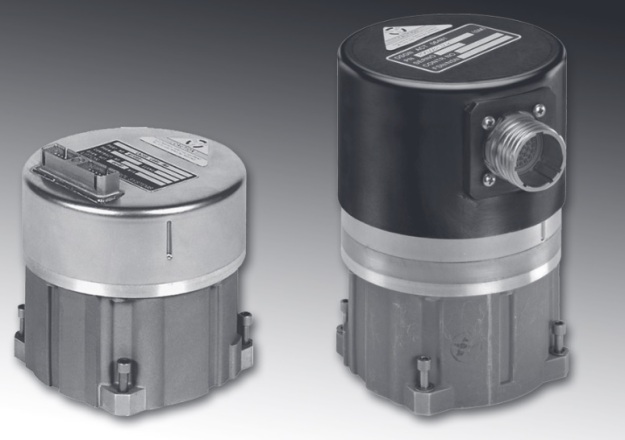 The LN-200 is a small, light weight, highly reliable, state-of-the art, fiber-optic, all-altitude, strap down Inertial Measurement Unit (IMU). The LN-200 has three solid-state fiber-optic gyros and three solid-state silicon Micro Electro-Mechanical System (MEMS) accelerometers in a compact package that measures velocity and angle changes in a coordinate system fixed relative to its case. Digital output data of incremental velocity and incremental angle are provided to user equipment over a digital serial data bus. The LN-200 is hermetically sealed and contains no moving parts, ensuring low noise, long usage and shelf life. The LN-200 has been in high rate production since 1994 with over 25,000 units produced.

Any LN-200 can be installed with variations of software, including: 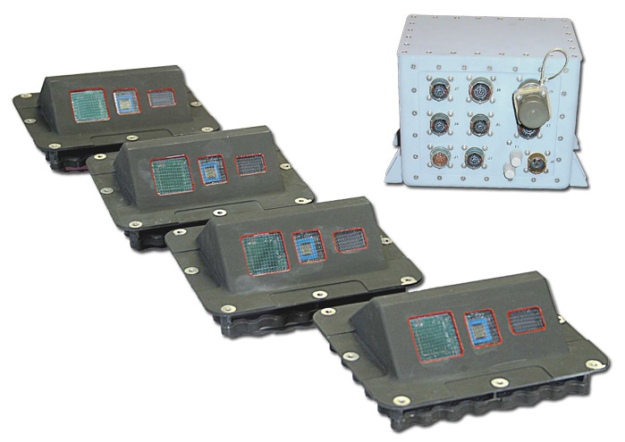 The AN/AVR-2A is a passive laser warning system which receives, processes and displays threat information resulting from aircraft illumination by laser designators, range finders and beam riding missiles. The threat information is displayed on the AN/APR-39A(V)1 Radar Detecting Set indicator in the cockpit. The AN/AVR-2A LDS is derived from the basic AN/AVR-2 LDS through the incorporation of several engineering change proposals (ECPs). These ECPs include: incorporation of the Multiple Integrated Laser Engagement System-Air-to-Ground Engagement System interface; incorporation of a removable user data module to the comparator interface to permit a means to apply software changes and system declassification; and increased Band III sensitivity for improved threat detection performance. The AN/AVR-2A LDS consists of one interface unit comparator and four identical sensor units. The total system weight is 21 pounds. 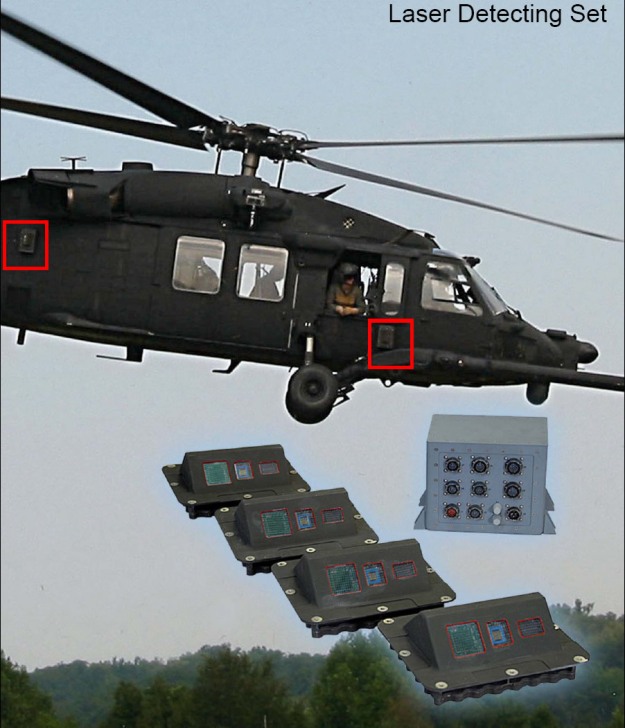 The AN/AVS-2B(V) was derived from the system developed for the Sikorsky RAH-66 Comanche. Goodrich claimes it is 40% smaller, 45% lighter (i.e. approx. 2,5 pounds (1,5 kg) per sensor) and uses 45% less power than the previous AN/AVR-2A(V) version . The system provides increased functionality for threat detection and data interface and has demonstrated a 500% improvement in reliability. The model was introduced into service in 2004. Source scramble.nl

The Sikorsky UH-60 Black Hawk is a four-bladed, single-rotor, medium-lift, utility helicopter. The latest configuration, the UH-60M, is powered by two General Electric T700-GE-701D turboshaft engines with 1,994 shp each. The older UH-60L is powered by the less powerful 1,890 shp T700-GE-701C.  Source bga-aeroweb.com

The aircraft is also fitted with two crashworthy and self-sealing 360gal fuel tanks. The gravity refuel ports are installed on the left and right sides of the transition section.

In July 2012, Sikorsky announced the delivery of the 500th H-60M Series Black Hawk helicopter. The deliveries comprise 400 UH-60M utility and 100 HH-60M MEDEVAC helicopters. Included are 73 UH-60M helicopters sold by the U.S. Army to six foreign militaries via the U.S. Government’s Foreign Military Sales (FMS) program. The 500 H-60M aircraft are part of a planned production run of a total of 1,375 M models (956 UH-60M and 419 HH-60M aircraft), which the Army plans to order through 2026. By then, the Army’s total Black Hawk fleet – including upgraded UH-60A and UH-60L – is expected to exceed 2,100 aircraft. Source bga-aeroweb.com

In April 2001, the US Army approved an upgrade programme for more than 1,500 Black Hawks to UH-60M configuration. Sikorsky Aircraft developed eight UH-60Ms in the integration and qualification phase of the programme. The UH-60M made its first flight at the Sikorsky Flight Development Center in Florida in September 2003.

The Pentagon’s Defense Acquisition Board approved low rate initial production (LRIP) of 22 new-build UH-60M aircraft in April 2005. The first helicopter was delivered to the US Army in July 2006.

During the ceremony, Brigadier General Robert L. Marion said, “The UH-60 is often referred to as the workhorse of Army Aviation and as such your efforts here, past, present, and future are critical to the continued defense of our nation. The rollout of the 1000th UH-60M BLACK HAWK marks an important outcome of our Aviation Modernization Plan, and these aircraft will transform our aviation fleet to a more flexible, capable, and ready team.”

In September 2008, the Government of Egypt requested a possible foreign military sale (FMS) of four UH-60Ms.

The Government of Mexico requested UH-60Ms through the US Government’s FMS programme in July 2009. The US Army Security Assistance Command delivered three helicopters for use by the Mexican Secretariat of the Navy (SEMAR) in October 2011. The Government of Mexico’s Federal Police (FP) received three helicopters from the US Department of State for law enforcement missions, in January 2011.

The Government of Sweden requested for 15 UH-60Ms through the FMS programme in September 2010. The helicopters were ordered by the Swedish Defence Material Administration (FMV) at an estimated cost of $546m in May 2011. Deliveries began in September 2011 and were completed in September 2012. The UH-60Ms were deployed by the Swedish Armed Forces in support of combat search and rescue and medical evacuation transport missions in Afghanistan Area of Responsibility (AOR).

The Royal Thai Army signed a letter of offer and acceptance with Sikorsky for the acquisition of two UH-60M helicopters through the FMS programme in July 2012. The Government of Austria also requested for three helicopters and associated equipment in December 2013.

The UH-60M helicopter is also in service with the Department of Homeland Security, US Customs and Border Protection and the Royal Jordanian Air Force.