The DF-26 is a Chinese intermediate-range ballistic missile. It is based on the earlier DF-21 , but has a longer range. Existence of this missile was revealed in 2014. The DF-26 was first publicly revealed in 2015. It appears to be in operational service for several years. This missile is in service with Second Artillery Corps, that are de facto strategic missile forces of the Chinese army.

Chinese sources claim that currently the DF-26 is the most advanced intermediate-range ballistic missile in the world. It is worth noting that the United States and Russia can not develop missiles of this class due to the Intermediate-Range Nuclear Forces Treaty, that was signed back in 1987. The only other comparable missile is the Indian Agni V. Chinese sources claim that the DF-26 is superior to the Agni V.

Chinese sources report, that the DF-26 also has an anti-ship variant with conventional warhead. It is intended to attack ships at sea, such as aircraft carriers or destroyers. If it is true, such missile could target the US Navy ships out to Guam. Source military-today.com

China is building up intermediate-range ballistic and cruise missiles that pose a growing threat to Guam, the strategic Pacific island that is central to the U.S. military pivot to Asia, according to a congressional report made public Tuesday.

Six different missiles capable of reaching Guam from China are deployed or in late stages of development, says the report by the U.S.-China Economic and Security Review Commission.

They include the DF-26 intermediate-range missile that Beijing unveiled during a recent military parade, and dubbed the “Guam-killer,” that can be armed with both nuclear and conventional warheads.

The report put the risk of a Chinese attack on Guam as low.

It was the Navy’s third “freedom of navigation” operation since October intended to challenge Chinese claims to the disputed islands and reefs.

A Chinese government spokesman criticized the warship passage as “threatening” China’s sovereignty over the islands. China is claiming some 90 percent of the South China Sea as its maritime territory.

The Philippines’ government has challenged China’s claims to the Spratlys at an international court that is expected to rule against China in the coming weeks.

The court ruling is expected to further intensify military tensions in the region.

The South China Sea is a key strategic waterway linking the Indian and Pacific Oceans where an estimated $5 trillion in trade transits annually.

The report identified other new missiles capable of hitting Guam as an anti-ship variant of the DF-26, and several air- and sea-launched land-attack and anti-ship cruise missiles. The missile has a range of between 1,800 miles and 2,500 miles, enough to hit Guam, which is located in the South Pacific about 1,500 miles from the Philippines.

The island is the focus of a major buildup of U.S. naval and air forces including attack submarines, strategic bombers, and long-range drones as part of the Obama administration’s “rebalance” to Asia.

“Guam … is growing in importance to U.S. strategic interests and any potential warfighting operations in the Asia Pacific, even as China’s ability to strike the island is increasing,” the report, written by commission analyst Jordan Wilson, says.

“Such attacks could hold key U.S. assets stationed on Guam at risk and also disrupt their region-wide response effort, slowing deployment timetables and reducing the effectiveness of U.S. forces in the theater.”

One worrying sign outlined in the report is China’s increased naval spying near Guam through PLA navy maritime intelligence-gathering ships.

“These ships likely have equipment enabling them to collect signals intelligence and map the ocean floor, suggesting the PLA Navy may be preparing for more routine naval operations in the vicinity of Guam in the near future,” the report said.

By threatening Guam with missile strikes, China’s communist leaders might be more willing to resort to military force in a crisis and limit the United States’ ability to deter conflict, the report said.

The report suggests the United States harden military facilities on Guam against missile attack, develop advanced missile defenses, and rethink continued adherence to the 1987 U.S.-Russia Intermediate-range Nuclear Forces Treaty that limits the Pentagon from building missiles with ranges between 300 miles and 3,000 miles.

Rick Fisher, a China military affairs analyst, said the report should be a wake-up call for U.S. policymakers who have insisted in the past that China’s modernization poses no threat.

“For decades scores of U.S. officials have been telling Americans that a strong China is good for America and the world,” said Fisher, a senior fellow at the International Assessment and Strategy Center.

“The China Commission’s report blasts this delusion; a strong China is building a growing threat to the security of America and to all democracies,” he said. “China is spoiling for a war in the South China Sea and if its wins, or forces the U.S. to leave Southeast Asia, it will set its sights on Guam.”

“The PLA [People’s Liberation Army] has developed new classes of conventional ballistic missiles to increase its capacity to strike Guam while seeking to keep any conflict below the nuclear threshold,” Wortzel said.

The report says the road-mobile DF-26 is not yet a precision strike weapon but that it poses a concern if large numbers are deployed. The DF-26 anti-ship variant also has not been tested against a ship at sea but is being developed.

The drive for a missile capable of striking Guam is the result of leaders of the ruling Communist Party of China seeking capabilities to counter what they regard as U.S. military encirclement of China.

To counter U.S. and allied forces in Asia, China is developing weapons for fighting conflicts in two island chains, the first stretching from Japan, to the Philippines to the South China Sea, and the second including the Northern Mariana Islands, Guam, Palau, and eastern Indonesia.

A new air-launched cruise missile, the long-range CJ-20, is deployed on China’s newest and most capable bomber, the H-6K. The missile has a range of 932 miles and the bomber’s range is 2,175 miles.

However, the bombers lack radar-evading stealth technology and could be countered by U.S. and Japanese jets.

“Depending on their position, surface ships and submarines equipped with [land-attack cruise missiles] would be able to provide additional strike options against facilities on Guam,” the report said.

China’s new YJ-18 anti-ship cruise missiles can travel up to 334 miles and could threaten U.S. naval operations near Guam if Chinese warships manage to get close enough without being detected.

The DF-26 missile is the most significant threat to Guam “although it likely will remain extremely inaccurate until China extends its precision strike capabilities,” the report said.

The commission’s report makes clear that in addition to Taiwan, Okinawa, and the Philippines, the island of Guam is now being targeted in planned barrage strikes of Chinese missiles.

“As Guam is now a frontline American territory in the battle for dominance in Asia, it is necessary that Guam receive far greater priority in U.S. defense allocations, to include early stationing of ground-based electromagnetic rail guns for terminal missile defense, the stationing for more nuclear attack submarines to [defend against] PLA navy cruise missile carriers, plus fighters and refuelers to [defend against] PLA air force cruise missile carriers,” Fisher said.

The Dong Feng-26 (DF-26) is a Chinese intermediate-range ballistic missile, likely a longer-ranged version of China’s DF-21 MRBM. It is considered China’s first conventionally-armed ballistic missile capable of striking Guam.1 Dubbed the “Guam Killer,” it has a range of 3,000-4,000 km, capable of ranging most U.S. military bases in the eastern Pacific Ocean.2 The missile can be armed with a conventional or nuclear warhead, and an antiship variant may also be in development.3

The DF-26 is a road-mobile, two-stage solid-fueled IRBM with an antiship variant possibly also in development.13 According to Chinese sources, the missile measures 14 m in length, 1.4 m in diameter, and has a launch weight of 20,000 kg.14 The missile has a range of 3,000-4,000 km, which puts Guam within striking distance. Its ability to strike Guam has resulted in the nicknames “Guam killer” and “Guam express.”15 The DF-26 comes with a “modular design,” meaning that the launch vehicle can accommodate two types of nuclear warheads and several types of conventional warheads.16 The accuracy of the DF-26 is uncertain, with speculators estimating the CEP at intermediate range between 150-450 meters.17

The DF-26 is transported and fired from a Chinese-built HTF5680 12X12 Transporter Erector Launcher. Source missilethreat.csis.org 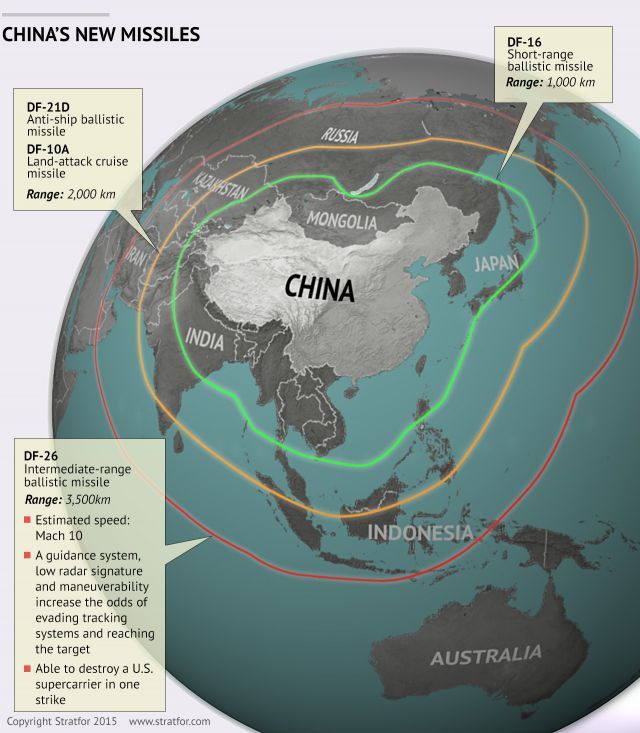 Not in the graphic are India, South Korea and North Korea.

India has about 137 ships
As of 2015, the Indian Navy has a strength of 58,350 personnel and a large operational fleet consisting of two aircraft carriers, one amphibious transport dock, 9 Landing ship tanks, 9 destroyers, 15 frigates, one nuclear-powered attack submarine, 14 conventionally-powered attack submarines, 25 corvettes, 7 mine countermeasure vessels, 47 patrol vessels, 4 fleet tankers and various other auxiliary vessels.South Korea has about 160 ships
The ROK (south Korea) Navy has about 70,000 regular personnel including 29,000 Republic of Korea Marines (as of 2014). In addition, there are about 160 commissioned ships in service with the ROK Navy, including 12 destroyers, 10 frigates, 12 submarines, 21 corvettes and 84 patrol vessels (with a total displacement of about 193,000 tonnes). The naval aviation force consists of about 70 fixed-wing and rotary-wing aircraft. The ROK Marine Corps has about 400 tracked vehicles including self-propelled artillery.The ROK Navy aims to become a blue-water navy by 2020.North Korea Navy – a lot of mostly obsolete shipsThe annual report of North Korea’s military capabilities by the U.S. Department of Defense, released in early 2014, identified the North Korean Navy’s strength at 60,000 personnel, 70 submarines, 420 patrol combatants, 260 amphibious landing craft, 30 mine warfare vessels, and 30 support ships. North Korea’s submarine force purportedly consists of 70 mostly obsolete boats, primarily used for coastal defense and reconnaissance operations, with limited capability for more offensive anti-ship operations (partially mostly due to lack of long-range air cover). The Korean People’s Navy (KPN) is believed to possess 20 Romeo-class vessels, 1,800-ton diesel-electric subs based on 1950s Soviet technology; 40 home-built 370 tons Sang-O-class diesel-electric submarines specifically designed for the insertion of special operation forces into the South but also capable of laying mines and conducting antisurface warfare; and approximately ten 130 tons Yono-class midget submarines.By 2020, China should have about 350 ships. by 2020 China’s navy will already increasingly look like a smaller version of the U.S. Navy and will be “the second most capable ‘far seas’ navy in the world.” In five years, the PLAN’s capabilities would dwarf most other navies – China would have as many aircraft carriers as Britain and India, more nuclear attack submarines than either Britain or France, and as many AEGIS-like destroyers as all the other non-US navies combined. China would have two aircraft carriers, 20-22 AEGIS like destroyers and 6-7 nuclear attack submarines, while United States would have eleven aircraft carriers; 88 AEGIS like destroyers; and 48 nuclear attack submarines. Source nextbigfuture.com