KT-100 is a new trainer jet being developed by Korea Aerospace Industries (KAI) for meeting ab initio training needs of the Republic of Korea Air Force (ROKAF). It is a basic trainer variant of the KC-100 Naraon light aircraft.

The new trainer will replace the ageing fleet of Ilyushin T-103 aircraft in service with the ROKAF. The KT-100 is also expected to be offered as a package to foreign customers.

The KT-100 trainer successfully made first flight at KAI’s plant in Sacheon Airport, in October 2015. The overall flight characteristics and performance of mounted equipment were tested during the flight.

KAI signed a memorandum of understanding (MoU) with the defence and transportation ministries and the Defence Acquisition Program Administration (DAPA) for the delivery of KT-100 basic trainer aircraft to the ROK Air Force Academy, in May 2014. The contract was finalised in December 2014.

The ROK Air Force Academy is expected to acquire more than 20 KT-100s, along with flight simulators and associated equipment by the end of 2016. The induction of KT-100 will complement the KT-1, T-50 and TA-50 trainer fleet, and will allow the ROKAF to conduct basic, advanced and combat readiness training with the indigenously built trainer aircraft.

The Air Force said Wednesday a new training aircraft, the KT-100, has been put into service.

Pilots of all levels ― from beginner to skilled ― can now train in a locally developed aircraft, it said.

The Air Force Academy rolled out the KT-100 during a ceremony at Cheongju, North Chungcheong Province, celebrating the delivery of two trainer aircraft from the country’s sole aircraft maker, Korea Aerospace Industries (KAI).

It said the new model will replace the aging Russian-made Ilyushin T-103s that have been used to train beginner-level cadets.

“The Air Force is expected to acquire some 20 planes from KAI and begin training its instructors by the end of this year,” an Air Force official said. “We plan train cadets with it starting from 2017.”

The move will allow the Air Force to train pilots with all Korean-made planes.
It has used KAI’s KT-1 basic and T-50 advanced trainers for primary and higher-level training, respectively.

A full domestic aircraft lineup will shorten the time and cost of training pilots, decrease maintenance costs and increase the operating rate of the trainers, the official said.

The KT-100 is a remodeled version of the KC-100 Naraon aircraft, a small, single engine, four-seater passenger plane developed by KAI. The company signed a memorandum of understanding with the Defense Acquisition Program Administration and the Ministry of Land, Infrastructure and Transport in 2014 to remodel the KC-100 for military use.

KAI said the KT-100 also has voice and video recorders and a system to identify friend or foe. Source @koreatimes.co.kr 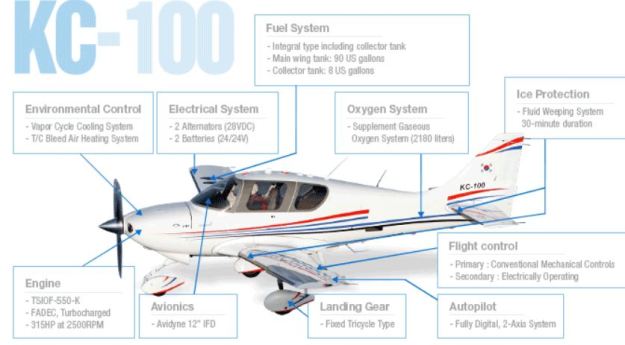 The environment control system on KT-100 includes a vapour cycle cooling system and a bleed air heating system. The aircraft is also installed with a fluid weeping system, as well as air-conditioning and oxygen systems. 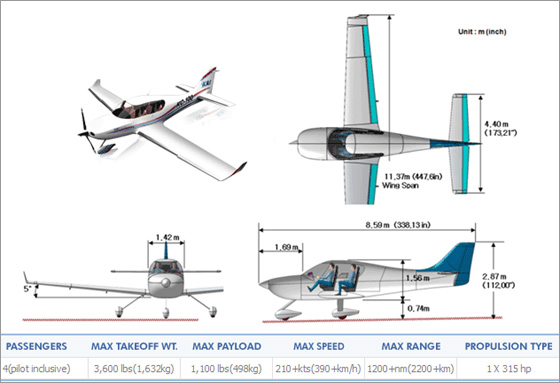 Engine and landing gear of KT-100

The power-plant of KT-100 trainer integrates a single TSIOF-550-K engine supplied by Continental Motors. The engine, fitted with full-authority digital engine controls, generates a power of 315hp at 2,500rpm.

Fuel is supplied by an integrated system that includes a 90gal main wing tank and a collector tank, with a storage capacity of eight gallons. The electrical power system has two 28V DC alternators and two 24/24V batteries.

Data from AVweb and KAI

Raytheon is pitching a new upgrade for the venerable M60A3 Patton main battle tank that would turn the elderly design into a competitive force on the modern battlefield—all at a fraction of the cost of a new vehicle.

Named the Raytheon M60A3 Service Life Extension Program (SLEP), the upgrade is being offered for export to nations that need the performance to take on threats like a Russian-built T-90S, but can’t afford a top-of-the-line machine like the M1A2 SEP(v)3 Abrams or Leopard 2A7.

At the core of the upgrade is a new 950-horsepower diesel engine—which replaces the original 750-horsepower unit. As part of the deal, the engine would be reconditioned to a zero hour condition. Meanwhile, the old turret hydraulic controls would be replaced with new electrical systems, which are faster, more responsive and quieter than their predecessors.

Offensive firepower is exponentially improved by swapping out the old 105mm M68 rifled gun in favor of the Abrams’ German-made L44 120mm smoothbore cannon. The addition of the new weapon would give the M60A3 the ability to engage enemy tanks as advanced as the T-90MS on a near equal footing. In fact, with the upgrade, the M60 probably outperforms older M1A1 variants.

That’s because in addition to the new cannon, the M60 would receive completely new digital fire-control and targeting systems—including day and thermal sights. The system is comparable to the U.S. Army’s M1A1D standard. Indeed, the fire-control software was developed for the U.S. Army. While Raytheon does not specifically mention networking—it’s reasonable to assume the modernized tank would be compatible with the U.S. Army’s networks.

Raytheon says that the U.S. Army tested the M60A3 SLEP at the Aberdeen proving grounds, but the company does not provide any details about any survivability improvements that are being incorporated into the tank. However, a Raytheon video does imply some improvements to the armor package.

Indeed, there are a few visible improvements—such as the addition of side skirts. But the configuration shown in the video does not seem to feature reactive armor or slat armor. Nonetheless, such features could likely be added as needed. In the future, it is possible that more even more advanced features like an active protection system—which are starting to proliferate around the world—could be incorporated into the M60A3.

In addition to much improved performance, Raytheon claims that a one major side benefit of the SLEP is that training and maintenance cost would be lower than for new tank because crews are already familiar with the basic M60. That means that Raytheon is targeting the existing base of M60 users around the world—which is still a substantial market.

However, while the modernized M60A3 is cheap, it remains to be seen if it would be truly effective against modern enemy tanks like the T-90A—and especially the extremely formidable T-14 Armata. It is likely that the M60A3 SLEP would fair well against most T-72 variants that are found around the world. The real test for Raytheon and the “M60” will be to convince potential buyers to forego a new machine in favor of a reconditioned one.

Dave Majumdar is the defense editor for The National Interest. You can follow him on Twitter: @davemajumdar.

Two Turkish M60T(Sabra Mk.II) tanks knocked out by an ATGM IS team