Antonov An-70 is a four-engine medium military freighter aircraft designed and manufactured by Antonov ASTC of Ukraine. The short take-off and landing (STOL) capable aircraft is being built to replace the company’s An-12 Cub transport aircraft. It is the first large aircraft to be powered by propfan engines. Two An-70 prototypes have been built to date.

The An-12 was the most important transport in the Soviet military service – wikipedia.org

The An-12 (NATO reporting name Cub) is a Cold War era transport aircraft. Antonov’s design bureau at Kiev built its first large military transport in 1955 with the twin-turboprop An-8 becoming a standard type. From this was derived the civil An-10 with four engines and a pressurized fuselage, from which in turn came the mass-produced An-12 military transport with full-width rear loading doors. First prototype flew in 1958.

From its entry into service in 1959, the An-12 became the most important transport in Soviet military service. Production of this aircraft ceased in 1973. Over 1 200 aircraft were built. The An-12 was widely exported. Although replacement by the Ilyushin II-76 began in 1974, some 560 An-12’s out of 800 delivered, were still in front-line duty as transports in 1986. The majority of these aircraft were An-12B machines, this variant becoming the standard transport in Soviet service from 1963. Together with the Il-76 it formed the backbone of the Soviet Airlift Command throughout the Cold War.

The An-70T is a cargo transport plane principally used for commercial applications. The An-70TK is a twin engine passenger or freight transformable aircraft. The An-112KC is an aerial refuelling model used in the KC-X programme for the USAF.

The Ukrainian Air Force ordered five An-70 aircraft in November 2005. The fuselage of the first serial production aircraft was completed in December 2012. Deliveries are expected to begin in 2013.

Five An-70s will be procured by Volga-Dnepr airlines. Antonov signed a contract with the Czech Republic in 2005 to supply three An-70 military transport airplanes.

Russia and Ukraine are planning to procure 165 and 65 An-70 aircraft respectively during the next 20 years.

Russia may purchase An-70 freighters in 2013 based on the success of flight tests to be conducted in 2013. It is currently operating a fleet of An-12 Cub, IL-76MD and An-124 transport aircraft.

Russia Defence ministry ruled out An-70 for state procurement

In March 2015 Russia Defence ministry declared that they are ruling out the An-70 for state procurement. They also declared that, as in their opinion, Ukraine has withdrawn from the military and defence agreements signed before the crisis between them by completing the plane without Russian involvement, they would request return of 2.95 billion rubles that Russian government had spent on An-70 project. Source wikipedia.org

According to Russian news

After removal from power of Viktor Yanukovych Ukrainian side further elaborated the project on their own. In April last year, “Antonov” has finished the test, and in January 2015 of the Ministry of Defense of Ukraine adopted the AN-70 into service.
According to a source in the Defense Ministry, the Defense Ministry is now considering the possibility of filing a lawsuit to recover 2.95 billion rubles, which were transferred to the State Enterprise “Antonov” for the design of the AN-70.

Last year, the Ministry of Defence has to file a claim in the Moscow Arbitration Court to recover 103 million rubles from the Ukrainian companies. The Russian military claimed a penalty from the Ukrainian aircraft designers for violation of terms of performance of works on creation and development of the AN-70. As a result, the court sided with the Defense Ministry and the courts of appeal and cassation confirmed the first instance decision. Минобороны исключило из госпрограммы вооружения Ан-70 Google Translate Defense Ministry has excluded from the state program of armaments An-70 posted 2 марта 2015 Source @izvestia.ru

Development of the Ukrainian military aircraft

The development of An-70 began in the 1990s and the first prototype was rolled out in January 1994. The maiden flight of the first prototype occurred in December 1994 in Kiev, Ukraine. It crashed in February 1995 during a mid-air collision that took place with an An-72 chase plane.

Russia and Ukraine unveiled a decision in June 2000 to build a Chinese An-70 version with co-operation from China. The two nations jointly financed the development of An-70 in 2002 as part of a 50:50 risk sharing deal. The Chinese version was displayed at MAKS Air Show held in Russia in 2003. Russia, however, withdrew from the project in April 2006, due to financial crisis and rigid political relationships between Russia and Ukraine. China and Ukraine jointly built the An-70-600 in 2008.

At the 2008 Zhuhai airshow, Antonov displayed a model of the large An-70 military transport aircraft, based on which China and Ukraine could jointly develop the AN-70-600. The new An-70-600 transport aircraft’s maximum payload was expected be 48t-50t compared to An-70’s 47t. One of China’s requirements is that An-70-600’s flight range should be at least 3,200km when carrying the maximum load. China also hoped that it can carry at least 3 China-made infantry fighting vehicles, or 120-150 paratroopers.

According to Ukrainian reports, at least three design candidates were submitted to the Chinese to address the Y-20 requirements:

According to Ukrainian sources, the Antonov bureau proposed a radical development of its An-70 transport that would replace its current contra-rotating propfan engines with four turbofan engines, lengthen the fuselage and increase cargo capacity to between 50 and 60 tons. This would approach the 70-ton capacity of the Boeing C-17 and exceed the 50-ton capability of the Ilyushin Il-76MD. The Chinese military transport aircraft would adopt different design concepts and technologies than the An-70 transport aircraft designed by Ukraine and Russia, and will be powered by four jet engines.

It appeared the new An-70 variant may be able to carry four of the ZLC-2000 airborne tank revealed in 2005 by the PLA. In September 2005 the PLA agreed to purchase about 32 Il-76MD transports, which can carry three ZLC-2000s, in addition to about 20 acquired during the 1990s. Antonov has also helped China’s Shaanxi Aircraft Company to produce a much improved version of the Y-8 called the Y-9, which can carry 20 tons of cargo. In addition, China held discussions with Antonov regarding the possible co-production of the 150-ton capacity An-124 Ruslan, which exceeds the 120-ton capacity of the US C-5 transport.

By early 2007 ANTK Antonov set up a new VTL (Heavy Transport Aircraft) working group, to start developing a heavy transport using the existing designs for the An-77, a turbojet version of the An-70, which had earlier been put on hold. The take-off weight of the aircraft was increased from 132 tonnes to 187 tonnes, the maximum payload went up from 47 to 50 tonnes, and the volume of the cargo bay was increased by adding a 2-meter insert in the airframe in front of the center-wing section. The original An-77 design relied on four CFM56-5A16 bypass turbofan engines; these were replaced by four D-30KP-2 bypass turbofan engines eventually used in the Y-20. The aircraft retained the ability to take-off and land using short landing strips, although the take-off length went up to 900m. The solution for increasing the thrust was the same as used in the An-77. First introduced in the C-17A Globemaster III, it directs the exhaust jet of the bypass turbofan engine at the high-lift flaps. Source globalsecurity.org

In August 2009, Russia signed a deal with Ukraine to renew its plans to fund the An-70 project. Russia offered $11m in December 2009 and is planning to invest an additional $96m. The user testing of the aircraft took place in August 2010. Antonov transferred the design documentation to Russia for commencing the production at Kazan aviation plant. (See above In March 2015 Russia Defence ministry declared that they are ruling out the An-70 for state procurement.)

Antonov An-70 design and cockpit

The An-70 was designed to take-off from and land on concrete and unpaved airstrips including soft ground and snow. It can manoeuvre day or night in bad weather conditions.

The airframe is constructed with composite materials to reduce the overall weight of the aircraft by 20% to 30%.

The An-70 features a spacious glass cockpit which can accommodate the three crew members – pilot, co-pilot and flight engineer. The cockpit is fitted with six full colour digital displays and a head up display, which aids the aircraft’s landing on short airfields.

Automated navigational and flight control systems are incorporated for quick analysis and servicing. 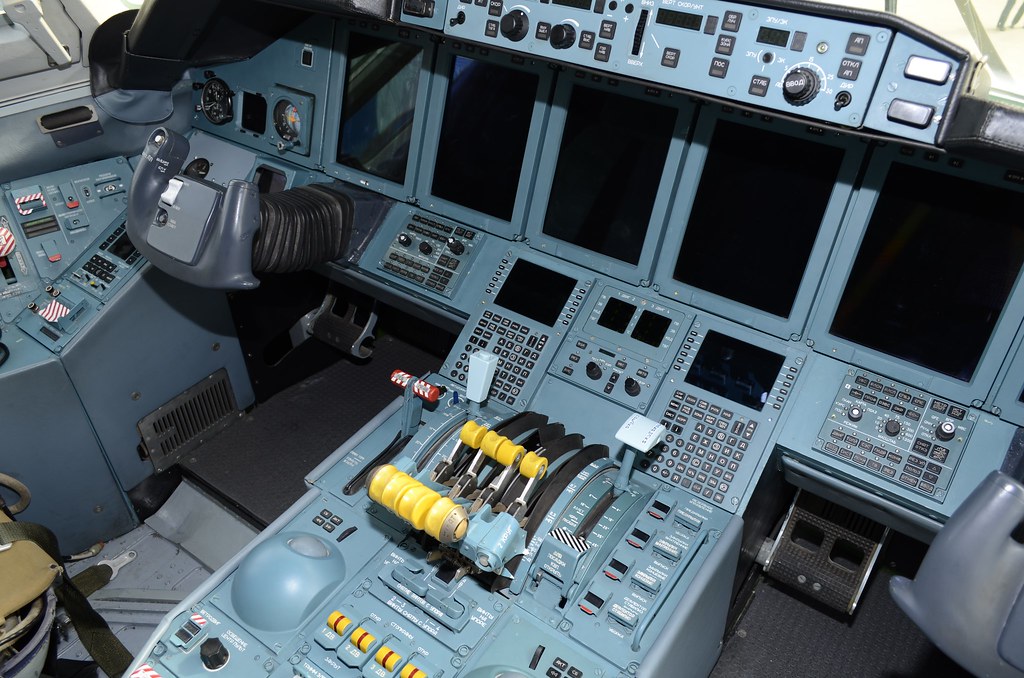 Engines and cargo systems of the military freighter aircraft

The Antonov An-70 is powered by four Ivchenko Progress D-27 three-shaft propfan engines. Each engine can produce 10,350kW of output power. FADEC compatible, the D-27 engine is fitted with two remote gearboxes, a single stage compressor, a four stage low pressure turbine and a jetpipe.

The incorporation of SV-27 counter rotating propeller in the power plant increases cruise speed as well as reduces the fuel consumption by 20% to 30% as compared to modern turbojets.

Data from Back in the Air

Comparison of price and cargo capacity