Not up to snuff

“There were technical, research-oriented issues” with India’s Akash system, a Ministry of Defense official told the Nikkei Asian Review. The military has finished testing Israeli, Russian and Swedish alternatives, with Israel’s Spyder in the lead, the official said.

The ministry’s Defense Research and Development Organization had worked on the Akash surface-to-air missile system for around three decades, intending to supply the army, navy and air force. The army has ordered two regiments’ worth, and the air force has ordered 15 squadrons’ worth, for a total of 250 billion rupees ($3.75 billion). The army had been expected to buy more, as it needs to deploy six missile regiments along the borders with Pakistan and China. The Akash has a range of 25km.

The army has informed the R&D agency that it will not order any more Akash systems, a source said. The Akash requires eight to nine seconds to fire, compared with just four to five seconds for the Spyder, making the homegrown system more likely to fail to intercept targets in border areas where response time is limited. Its lack of the latest guidance technology was apparently also a concern to the army.

Contract negotiations with Israel “will be started sometime later,” a ministry official said. The military expects to negotiate the price of the Spyder down to a level on a par with the Akash.

The Akash’s technical weaknesses owe to more than a decade of development delays. The navy has avoided the Akash, citing stabilization problems, and the air force is unlikely to put in any more orders.

Security analyst Rajeev Sharma argued that the capabilities of the R&D agency, which is tasked with developing more sophisticated military technology, are lacking. The Akash is “meeting the same fate as Arjun,” the indigenous tank developed by the DRDO over 20 years, “which has no more buyers now due to its weaker features,” Sharma said. The government replaced the agency’s head last year.

Pakistan and China, which have locked horns with India in South Asia for years, have been building up their militaries. Pakistan is strengthening its aerial forces, marketing the JF-17 fighter jointly developed with China to Asian countries including Myanmar and Sri Lanka while seeking to buy F-16 jets built by American defense contractor Lockheed Martin.

The U.S. decided Monday against extending $430 million in foreign military financing to Pakistan, requiring Islamabad to fully fund the F-16 purchase on its own. But this has not fazed Pakistan, which can still buy from China or Russia.

Though Pakistan’s military spending is just a fifth of India’s, Beijing spends four times as much as New Delhi. With Pakistan and China building closer defense and economic ties, the Indian military urgently needs to update its old equipment centering on gear from Russia.

But it faces budgetary constraints. India’s military spending ranks sixth in the world, according to data from the Stockholm International Peace Research Institute. Defense expenditures account for 9% of its budget, topping China’s 6% and Japan’s 2%. The country is the world’s top weapons importer, an expense that weighs on its finances and its balance of payments.

Under Prime Minister Narendra Modi, the government has promoted local production to pave the way for cheaper weapons procurement. It raised the foreign ownership cap in the defense industry from 26% to 49% in 2014. Businesses in India’s private sector are joining hands with foreign companies in such arrangements as a joint venture by the Tata group with Boeing on military aircraft production.

But the Akash decision is seen as a message from the Defense Ministry that it does not “compromise on operational readiness, irrespective to the location of manufacturing,” an Indian defense expert said. With government approval required for foreign stakes in defense contractors exceeding 49%, many overseas companies hesitate to transfer cutting-edge technology to India. And the military now looks less likely to accept equipment that is a step down.

New Delhi had hoped that a shift to domestic production would let it strengthen the military while saving money. For now, though, the country will likely need to keep relying largely on imports.

Enough of Akash, says Army as it opts for Israeli missiles

When commercial aircraft product launches are stage-managed with a careful unveiling of ­billions of dollars worth of orders from a few hand-picked customers, the sight of a new military aircraft propelled into development with no announced buyers can come across as a rarity bordering on reckless.

Selling military aircraft is already a hard business, subject to feckless stewards in the acquisition offices, unreliable support in the political class and shifting ­requirements from an, often exclusive, primary customer. But at least the development cost is usually paid by the taxpayer, freeing the contractor from the risk of a wholly profitless venture. Remove that development subsidy and the whole business looks unfriendly to all but high-stakes gamblers.

Into this marketing maelstrom in 2013 was thrown the Textron AirLand Scorpion, a twin-engined fighter with three plausible military missions: intelligence, surveillance and reconnaissance; light attack; and advanced jet training.

Three years into the project, the Scorpion demonstrator has yet to find a launch customer. It is not the world’s only self-funded development project. In South Africa, Denel is developing the turboprop-­powered AHRLAC for a similar role, with perhaps even dimmer prospects of a launch order on the way from the cash-strapped government in Pretoria.

Historically, for every visionary gamble – Abe ­Karem’s unmanned Predator comes to mind – there are many more expensive flops, such as the worthy-yet-unloved Northrop F-20 fighter. In which basket will the ­Scorpion ultimately fall? A production-conforming prototype, possibly ready in time for the ­Farnborough air show, will no doubt soon settle the matter.

Textron AirLand’s sales pitch is at least timely and truthful. Where modern fighters carry awesome sensors and weapons at eye-watering prices, the Scorpion offers similar capabilities and even a trainer on a comparatively cheap platform, albeit one that can only ­operate with minimal risk of attack from ground or air.

Maybe Textron AirLand need not even make a sale to deem the Scorpion a success. Assembling the airframe has given joint venture partner Textron Aviation hands-on experience in all-composite jets, which may one day boost its Cessna and Beechcraft ranges.

But Textron AirLand is a determined champion. At Farnborough and other events later this year, Scorpion will receive a fair hearing – and let the chips in this high-stakes game fall where they may.

Don’t think this plane will make it at $20 million if they reduced the price and throw in all the gadgets it might work and make money in the long run for upgrades, maintenance and spare parts!

They also dropped out of the T-X competition

The Yak-130 cost $15 million according to sources on the net and just look at the numbers 290 units! 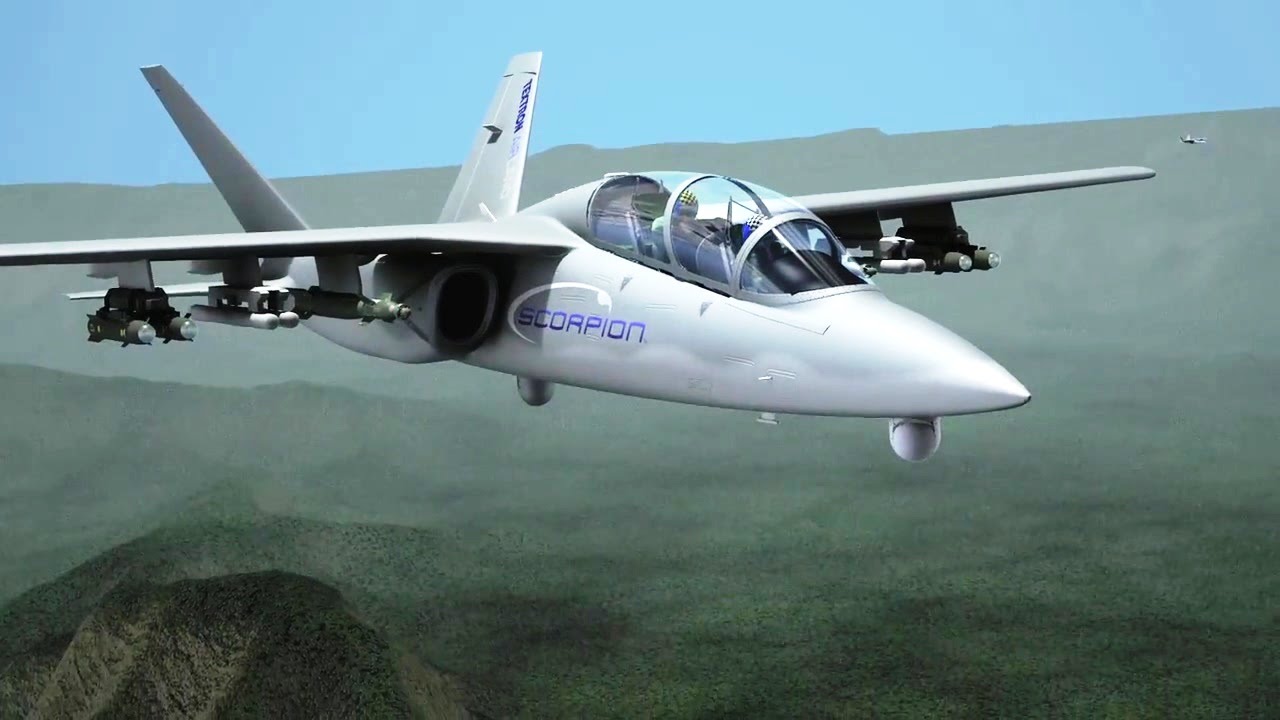