The model bought by the ministry suggests that the weapon is designed for use in urban areas, though it could be also used to destroy buildings, transport and lightly armored vehicles in the field and in mountainous areas, according to gazeta.ru.

Russian news agency Interfax quoted Alexander Mikhailov, a retired Russian general and a veteran of the special services as saying that the flame rocket launchers were likely purchased for the newly created Russian National Guard.

In April, President Vladimir Putin created the National Guard to fight extremism, terrorism and to participate in territorial defense. He appointed the former chief of his personal security as its head.

It includes OMON and other rapid response teams, which were previously part of Russia’s Interior Ministry.

It can also hit targets located at a distance of 700 meters and is nicknamed “a sniper flamethrower” by the Russian military.

According to a draft law, submitted to the State Duma by Putin on April 5, the National Guard will be allowed to use their weapons without warning “if it would help to save lives.” In other cases, the guardsmen will have to give a warning before opening fire.

The Shmel is designed, produced and exported by the Russian Federation and previously by the Soviet Union. It entered service with the Soviet Armed Forces at the end of the 1980s as the successor for the RPO Rys. Source  wikipedia.org

Rocket flame-throwers, which are basically disposable mulls-purpose rocket launchers, have become yet another type of man-portable recoilless weapons. They inherited their name from jet flamethrowers, used in WWI and WWII. Later on flame-throwers became almost extinct due to a short range of flame-throwing and considerable losses of the flame along the trajectory.

When new explosives, featuring sever high-explosive and thermal effects, were developed in the 1980s, designers were able to come up with a man-portable recoilless weapon firing multi-effect munitions. The RPO Rys infantry rocket flame-thrower was the first such weapon, developed in the USSR. Later on it was succeeded by the RPO Shmel disposable flame-thrower, developed by the Tula-based KBP Instrument Design Bureau.

The Shmel flame-thrower is intended to boost combat capabilities of Army units. It is designed to kill enemy manpower and weapon systems inside various protective shelters, destroy fortifications, render transportation and lightly armoured vehicles ineffective, as well as produce on-target incendiary effects and create smoke screens. The flame-thrower can be fitted with the -following three types of warheads: the RPO-A thermobaric warhead, the RPO-Z incendiary warhead, and the RPO-D smoke warhead. The Shmel flame-thrower features high combat capabilities, a simple design, and an outstanding reliability.

The expendable launch tube (which is also a sealed container for storage and transportation) accommodates a capsule — a corresponding warhead and a gunpowder engine. The launch tube is made of fibreglass. It mounts a trigger assembly with a safety and iron sights, comprising a foresight and a pop-up range-calibrated dioptric rear sight. The flame-thrower can be equipped with an optical sight. The standard set includes two loaded RPO launchers, joined together to be carried as a back-pack weighing a total of 24 kg.

When fired, the capsule/warhead is propelled forward by the momentum. It is fin-stabilised. The unique design of the projectile ensures a minimal variation of muzzle velocities and a high rate of fire, which facilitates a high hit probability against an IFV at a range of 400 m. The effect of the warhead is comparable to that of a 152 mm high-explosive/fragmentation artillery round. The flame-thrower is shoulder-fired. It can be fired from rooms with a space of more than 60 nr and with obstacles behind the firer.

The new Shmel-M infantry rocket flame-thrower was developed by the Tula-based KBP Instrument Design Bureau in the mid 2000s lo replace the Shmel flamethrower, It is basically a deep modernisation of the RPO-A with a considerably greater range of fire and a much more powerful round. The maximum range of fire was increased from 1000 to 1700 m while the effective range of fire grew from 600 to 800 m. The warhead yield of the new flame-thrower is the equivalent of 5-6 kg of TNT, which is comparable to the hgh-explosion effect of a 152-155 mm artillery projectile. At the same time the weight of the flame-thrower was reduced form 12 to 8.8 kg. The flame-thrower was designated RPO-PDM-A Shmel-M (where ‘PDM’ stands for ‘Povyshennoi Dalnosti i Moshchnosti’ or enhanced range and power).

Just like the Shmel flame-thrower, the Shmel-M is a heavy multi-purpose man-portable recoilless weapon of the rocket launcher type. It is designed to boost combat capabilities and tactical independence of Army units. The Shmel-M efficiently kills enemy manpower and weapon systems inside various protective shelters, destroys fortifications, and renders ineffective soft-skin and thin-skin vehicles.

Unlike its predecessor, the RPO-PDM-A features a rocket motor integrated with its warhead. It has a smoothbore fibreglass launch tube, which also serves as a storage container. The flame-thrower undergoes the final assembly at the manufacturing plant and is delivered to military units ready for use. For firing the launch tube is fitted with a trigger assembly and an optical sight. Two loaded launch tubes and one trigger assembly with ал optical sight are joined together to be carried by one man as a back-pack weighing a total of 19 kg.

The ZBD-04A uses the crawler chassis and features a 100mm main gun with a 30mm machinegun. Its defense ability, mobility and firepower are relatively strong. It can effectively support the infantry’s operations.

The focus of the Type 04 AIFV has always been on landing operations from the early stage. The special requirements mean that the combat weight of the Type 04 must be strictly controlled, and its water mobility shall be the priority.

Therefore, the defense ability of the Type 04 is not as strong as that of the world’s advanced AIFVs where they can defend long-range front-shooting of 30 mm machinegun and side-shooting of 12.7 mm machine gun.

In order to fill these gaps and optimize its design, improvements began on the Type 04. The improved model is today’s Type 04A AIFV.

The intention to improve the Type 04 AIFV is to maximize its defense ability and therefore the improvements are all focused on the enhancement of the defense ability. The side hull armor of the vehicle are composed of basic steel plates and add-on modular armor.

The new ZBD-08 has a number of improvements. Its hull was slightly redesigned in order to improve armor protection at a cost of reduced amphibious capabilities. The previous ZBD-04 IFV has great amphibious capability and can operate at Sea State 2-3. However this feature is not required by typical army units. Overall height of the vehicle was reduced. Also the new vehicle is heavier due to increased armor.

In addition to the enhancement on both sides, the defense ability in the bottom has also been improved and the Type 04A is now not afraid of small anti-tank mines. By optimizing the design and using add-on modular armor and other measures, the overall defense capability of the Type 04A’s chassis has been greatly improved.

The Type 04A AIFV’s maximum power is 440 kilowatts. Its maximum speed is 75 km / h and the maximum travel distance is 600 kilometers. Compared with the Type 04,the Type 04A has the floating ferry capacity in inland rivers and lakes, with a speed of 6 km / h.

It is known that the new IFV uses the same engine as the ZBD-04. It might be a BF8M1015CP diesel, developing 590 hp. Other sources claim that vehicle is powered by a copy of the BMP-3 engine, developing 500 hp. Engine is mated to a 4-speed manual gearbox. Suspension is broadly similar to that of the BMP-3. The ZBD-08 is still fully amphibious. It lacks waterjets, however on water it is propelled by its tracks. It can still ford lakes and inland rivers, but it no longer capable to operate at sea.  Source military-today.com

The combat weight of the Type 04A AIFV is around 24 tons, 4 tons heavier than its predecessor. Due to the strong power of the engine, its unit power is still 18 kilowatts / ton and this is the same to the world’s advanced level. Therefore, the Type 04A can team with the latest model of Type 99 tank in combat operations.

Type 04A AIFV is equipped with a two-man turret-mounted 100mm main gun with a 30mm machine gun as well as a 7.62mm machine gun and two smoke launchers at each side of the turret.

The new IFV retains turret of the ZBD-04. It is a complete Russian BMP-3 turret, which is now license-built in China. It has similar firepower comparing with the BMP-3 and in these terms outperforms most current IFVs. Its 100-mm gun has an effective range of 4 km. This gun can fire both ordinary projectiles and anti-tank guided missiles. It is compatible with Chinese indigenously designed ATGMs, derived from the Soviet AT-10 Stabber, are capable of penetrating up to 600 mm of armor behind ERA blocks and pose serious threat to main battle tanks. It is claimed that hit probability of the missile is at least 80%. The 30-mm cannon has an effective range of 1.5 – 2 km. The ZBD-08 is also fitted with a coaxial 7.62-mm machine gun.

9M117M1 Arkan missile (top) and 3UBK23-3 cartridge with Arkan missile plus propelling charge (bottom) (thesovietarmourblog.blogspot.com) AKA T-10 Stabber. Laser-guided ammunition Arkan Tandem 9M117M1 which can be used against modern main battle tanks at a maximum range of 5,500m and against sheltered and exposed personnel and fortifications at a maximum range of 7,000m  @thesovietarmourblog.blogspot.com

The 100-mm cannon is completed with an autoloader. It has a rate of fire of 10 rounds per minute. Vehicle carries a total of 30 rounds for the 100-mm gun, including 22 ordinary HE-FRAG rounds and 8 anti-tank guided missiles.

The type 04A AIFV has a truly integrated electronic information system including computer control, digital transmission and data bus technology.

An integrated control display device with better technical performance is equipped in the Type 04A AIFV for the vehicle captain, gunner and driver.

In addition, battlefield Identification Friend or Foe (IFF) system is installed in the Type 04A. This is a great leap in the development of China’s Armored Infantry Fighting Vehicle.

The Type 04A AIFV is an improved tracked Armored Infantry Fighting Vehicle, aiming to better cooperate with China’s main battle tank Type 99A to carry out combat operations. The Type 04A AIFV and Type 99A tank constitute the basic combat unit of the PLA. This combat unit is able to destroy or seize key objectives of the enemy’s combat system, annihilate armored targets and vital forces and so on. 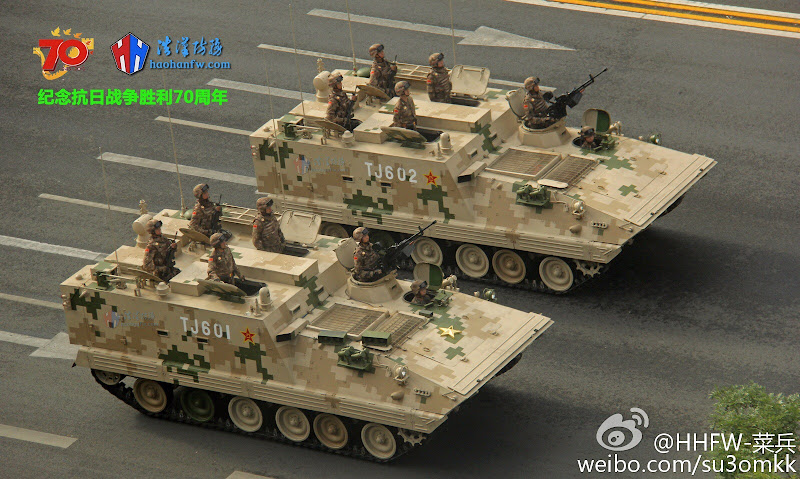 HJ-10 ATGM can hit the target as far as 10 km away with man-in-the-loop control. pic.twitter.com/Ahkl7BTpGq

The U.S. State Department has approved the supply of additional Hellfire missiles to France under an earlier Foreign Military Sales deal.
By Richard Tomkins   |   May 3, 2016 at 12:22 PM

The total estimated cost of the deal is $30 million.

The U.S. Defense Security Cooperation Agency, which manages the FMS program, said in its notification to Congress that the additional missiles will meet France’s operational requirements for a precision guided tactical missile for its Tigre Attack Helicopter.

“The purchase will directly support French forces actively engaged in operations in Mali and Northern Africa, providing them the capability to successfully engage targets with minimal collateral damage.