HUNDREDS of British troops could be deployed to the Falklands in a matter of “hours” if Argentina threatened to attack the islands, according to a former UK defence secretary.

Sir Malcolm Rifkind, who served as Defence Secretary and Foreign Secretary during the 1990s, gave an analysis of Argentina’s pitiful military prowess as he said the Falklands were better defended now than at any point since the Falklands War, which ended more than three decades ago.

He insisted islanders had little to fear from a belligerent Buenos Aires administration because Argentina’s military capability was now a “shadow of what it was in the 1980s”.

He told Express.co.uk: “The Falklands today are hugely easier to protect. Argentina from a military point of view is far weaker and at any time of increased tensions the Falklands can be reinforced in hours not in weeks by air delivery of troops and equipment and anything else that might be required.”

Analysts estimate up to 1,000 British troops could be sent to the remote South Atlantic islands within days using an “air-bridge” with Ascension Island, where the RAF has a base, which allows planes to refuel mid-way through the 20-hour flight.

Key to defending the Falklands is RAF Mount Pleasant, which was expanded during the 1980s following the conflict with Argentina.

The longer runway enabled larger jets to make the transatlantic journey, meaning more troops could be deployed at shorter notice.

The strenghened air deterrent on the islands also relieved pressure on rotating Royal Navy aircraft carriers stationed nearby in the aftermath of the 1982 conflict.

Last December’s election of Mauricio Macri heralded a thaw in relations between the UK and Argentina after years of threats and aggressive rhetoric by Cristina Fernandez de Kirchner.

But Buenos Aires has been celebrating a recent UN commission decision to expand Argentine maritime territory by a third, to include waters surrounding the Falkland Islands.

Experts believe the UK has little to fear from the current administration or Argetina’s severely diminished armed forces.

RAF Mount Pleasant, which was expanded during the 1980s following the conflict with Argentina

Leading academics on Argentine affairs agree the country lacks the military muscle to pose a serious threat to the islands today.

One regional expert, speaking to Express.co.uk, dismissed Argentine claims of sovereignty over the South Atlantic islands as “bluster” that would “never be followed up by any military action”.

Mark Jones, a political scientist at the US-based Baker Institute, said Argentina’s navy consisted of between 10 and 15 seaworthy ships, which were often deployed on exercise for just two weeks a year.

Port Stanley on the Falkland Islands

He recalled instances where local fishing firms had donated money to the coastguard so that they could buy fuel to go out on patrol, while the air force’s ageing fleet of Soviet-era Mirage jets were only able to fly during daylight hours and in good weather as their radar systems were now defunct.

And he said many of its land vehicles were so dilapidated that they had to be towed onto the battlefield during military drills.

But the Royal Holloway academic added there were signs that Buenos Aires planned to modernise Argentine forces.

He told Express.co.uk: “They are trying to chip away at the Falklands.

“They know the military route is out of the question, but they hope there will come a time when the British government and British public support turns and says we no longer want to spend millions of pounds keeping up our military air base.

“They are in it for the long game.”

Instead, Argentine authorities were attempting to harm trade on the islands by making “deliberate attempts to make life difficult for the Falklands in commercial terms”, threatening legal action against firms that do business with the islands.

Tourist vessels have also been harassed and attempts at developing the island’s vital fishing industry, which is largely dependant on the migratory patterns of squid and contributes as much as 60 per cent of GDP, were being hampered.

Despite instability in the Middle East, defence of the Falklands remained priority number “two or three” for the MoD, Prof Dodds added.

He said: “There are around 1,000 British personnel on the airbase at any one time and usually four Typhoon jets.

“If the men were ready to go, within a couple of days you could boost that presence with a thousand troops down there.”

Tory MP Andrew Rosindell, who has long campaigned on the importance of protecting the remote British overseas territory, told Express.co.uk: “Given recent rhetoric from Argentina, it is vital that we maintain a round-the-clock defence to ensure the protection of the Falkland Islanders.”

A British-made mine destroying underwater vehicle that can search and destroy the explosives at sea, has been snapped up by the US Navy. The US Department of Defense awarded a £15.5m ($22m) contract to BAE Systems to supply the Archerfish – a remotely operated underwater vehicle (ROV) equipped with an explosive warhead to destroy sea mines.

Launched from ships, helicopters and underwater vehicles, the technology is the only mine neutralizer capable of being deployed from the air.

“It has formed a key part of the US Navy’s Airborne Mine Neutralization System (AMNS) programme since 2007,” BAE Systems said in a statement.

The weapon is named after the Archerfish, a small creature that can shoot down insects and small animals from up to three meters away by firing jets of water from its mouth. Found in tropical countries like Australia, India and the Philippines, these fish typically live in estuaries and mangrove swamps, but they have also been found upstream in freshwater and open oceans.

Like the creature, the Archerfish ROV, which is manufactured by BAE System’s Portsmouth facility, can shoot mines from relatively long distances. Once in the water, the Archerfish enters a “hover mode” as it approaches the target, allowing it to take pictures and feed video back to the operator so they can determine the exact nature of the threat. 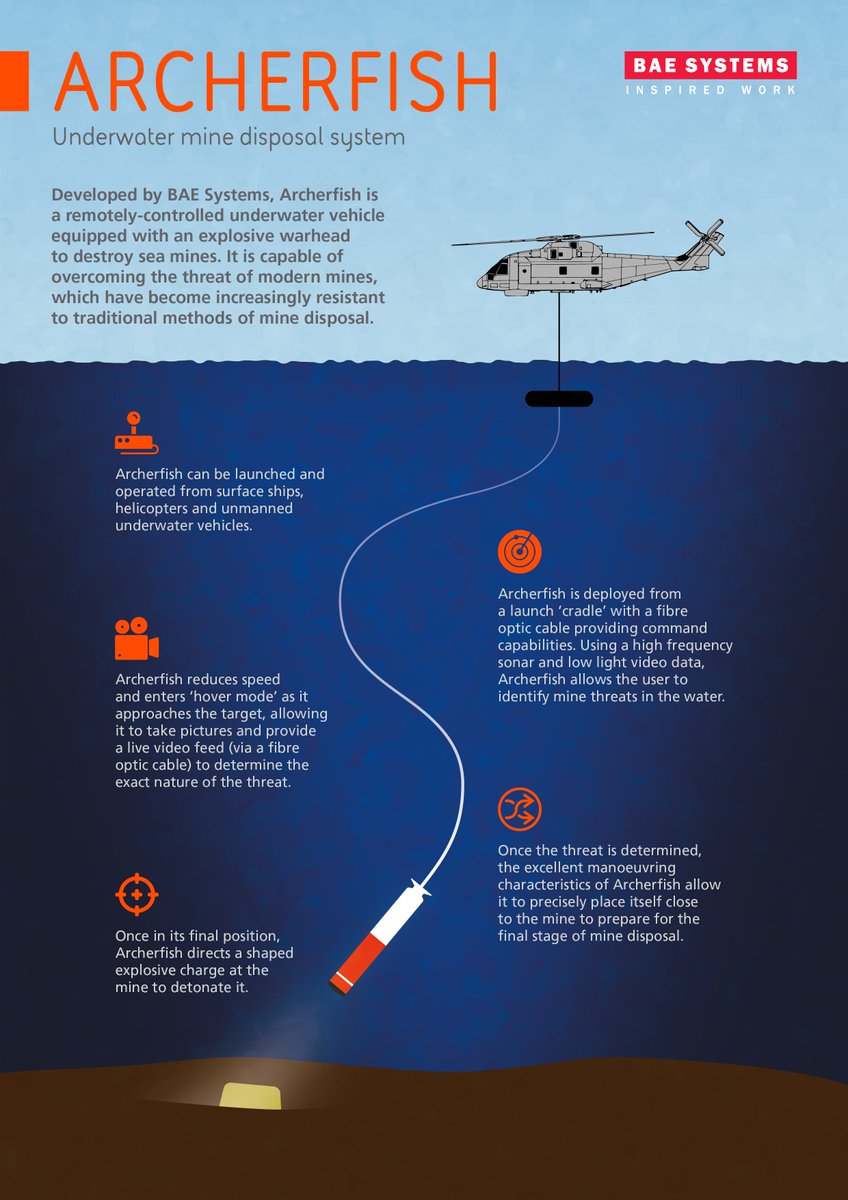 It can the manoeuvre itself within range of the mine and place an explosive charge, which is used to detonate the mine.

The US Navy contract includes the supply of fibre optic spools, which provide a communications link between the Archerfish and its launch platform. The US Navy mainly use MH-60S helicopters for these minesweeping missions, which are deployed from the navy’s combat ships.

Deliveries will begin in September 2017. The contract also includes further options which, if exercised by the DoD, could bring the total value to more than £39m.

A US Air Force reconnaissance plane was intercepted by a Russian SU-27 jet in an “unsafe and unprofessional” manner while flying a routine route in international airspace over the Baltic Sea, the Pentagon said.

“The US aircraft was operating in international airspace and at no time crossed into Russian territory,” said Laura Seal, a Pentagon spokeswoman.

The incident comes shortly after Russian aircraft repeatedly buzzed the USS Donald Cook this past week, including an incident Tuesday in which a Russian Su-24 flew 30 feet (nine meters) above the ship in a “simulated attack profile,” according to the US military’s European Command.

Russia has denied the action was reckless or provocative.

“This unsafe and unprofessional air intercept has the potential to cause serious harm and injury to all aircrews involved,” Seal said of Thursday’s incident.

“More importantly, the unsafe and unprofessional actions of a single pilot have the potential to unnecessarily escalate tensions between countries.”

The US aircraft in question was an RC-135.

Another day another case the RC-135 is essentially a spy plane!

USA if not careful might get there war soon which they will regret!

The aircraft is derived from its predecessor the C-135 Stratolifter and can execute intelligence, surveillance and reconnaissance (ISR) operations.

Onboard electro-optic sensors fitted in the aircraft trace geo-located signals within the electro-magnetic spectrum and transfer the captured data to operators through secure satellite communication data link.