The S-500 is a new long-range anti-aircraft and anti-ballistic missile system, that is currently being developed in Russia. Development of this air defense system commenced in 2002. It is being developed by Almaz-Antey company. This system is also referred as the Prometey (Prometheus) and Triumfator-M. Prototype testing is expected to begin in 2015. The S-500 is planned to enter service at the end of this decade, possibly in 2017-2018. Russia plans to field ten battalions of S-500 missiles.

The S-500 is not an upgrade of the S-400, but a new design. It uses a lot of new technology and is superior to the S-400. It was designed to intercept ballistic missiles. It is planned to have a range of 500-600 km and hit targets at altitudes as high as 40 km. Some sources claim that this system is capable of tracking 5-20 ballistic targets and intercepting up to 5-10 ballistic targets simultaneously. It can defeat ballistic missiles travelling at 5-7 kilometers per second. It has been reported that this air defense system can also target low orbital satellites. It is planned that the S-500 will shield Moscow and the regions around it. It will replace the current A-135 anti-ballistic missile system. The S-500 missiles will be used only against the most important targets, such as intercontinental ballistic missiles, AWACS and jamming aircraft.

“We are expecting the first models of the S-500 air defense systems very soon,” Gumenny said on Russia’s Rossiya-24 television.

Russia’s newest S-500 Prometey system, which is expected to begin tests shortly, will be a major upgrade to the state-of-the-art S-400 complex and will, according to member of the advisory council of the Military-Industrial Commission Viktor Murakhovsky, be second to none.

The 55K6MA CP appears to be a rehosting of the baseline S-400 55K6E CP to the BAZ-69092-012 chassis, with the addition of an improved NK Orientir precision navigation system. The telescoping datalink antenna appears to cylindrical in shape. Source ausairpower.net

There is insufficient detail to infer any design changes between the baseline 91N6 and the S-500 variant 91N6A(M) subtype. A BAZ-6403.01 tractor is used, also intended for future S-400 builds. The semi-trailer design has been revised and would provide better off-road handling due to the reduced surface loading of a three axle design.

The 96L6-TsP Acquisition Radar appears to be a rehosted system on the BAZ-69096 chassis. The gas turbine APU location has been changed. A telescoping datalink mast, with cylindrical antenna elements, appears to be part of this configuration. The drawing does not include the NK Orientir precision navigation system, and may be an omission.

This radar is drawn with the antenna head module of a 92N6E Grave Stone. The crew cabin is much smaller, and similar in design to that used with the 64L6E Gamma-S1E. An important design feature is the use of a telescoping datalink mast, with cylindrical antenna elements, which suggests use with widely dispersed TELs, in turn suggesting a SAM engagement capability. A reasonable inference is that this radar is a derivative of the 92N6E Grave Stone, intended to provide guidance against aerial and IRBM targets. The drawing does not include the NK Orientir precision navigation system, and may be an omission.

This radar is drawn with an enlarged rendering of the antenna head module of a 92N6E Grave Stone. The 10 x 10 BAZ-69096 chassis indicates the need to carry a much heavier radar than the 92N6E Grave Stone, which is consistent with the ABM radar function which requires greater power-aperture product performance compared to a SAM engagement radar. The size of the folded antenna is similar to that in the proposed  wheeled 9S19MK Imbir / High Screen ABM acquisition radar, and 9S32MK ABM engagement radar, both part of the S-300VMK system. The drawing includes the NK Orientir precision navigation system, but shows no datalink mast for dispersed TEL operation.

The new 40V6MT replaces the legacy 40V6M/MD series. It appears to be an entirely new design with a different outrigger arrangement, and revised elevating mechanism. It is towed by a BAZ-6403.01 tractor.

The 77P6 is closest in appearance to the 9A82MK TEL for S-300VMK, including the use of the legacy 9A82/9A84 gantry and 9Ya238 Missile Launch Tube / Transport Container, used for the 9M82/9M82M / SA-12B/SA-23B Giant missile. Prominent differences from the 9A82MK/9A83MK are the accessory housings, which are considerably more compact, and an outrigger design common to the self-propelled S-400 9P90S TEL. The drawing shows no evidence of the CW illuminator/uplink antenna used with S-300V/VM TELARs, and does not include the NK Orientir precision navigation system, which may be an omission.

The S-500 will carry various missiles. These missiles will have various ranges and will be used against different targets. In 2009 a 40N6 long-range air defense missile was ready for testing.

The composition of the air defense / missile defense system S-500 :

This system has brief reaction time. It has been reported that the S-500 can launch missiles within 10 minutes from travelling. Also it can be considered as a survivable system, as after launching its missiles it can briefly redeploy. In the 1980s Soviets already used this shoot, scoot and hide philosophy on the S-300V air defense system.

The Krasukha-4 (Krasuha-4?) is a mobile electronic warfare (EW) system mounted onto a BAZ-6910-022 8×8 truck system. The Krasukha-4 is intended to neutralize Low-Earth Orbit (LEO) spy satellites, ground-based radars and airborne radars (AWACS) at ranges between 150 to 300 kilometers. The system is also able to cause damage to the enemy’s EW systems and communications. The Krasukha-4 system works by creating powerful jamming at the fundamental radar frequencies and other radio-emitting sources. The system is manufactured by the Bryansk Electromechanical Plant (KRET). Source deagel.com

Sources in the Swedish government have blamed Russian intelligence for causing a major cyberattack on Sweden’s air traffic control system that lasted for at least five days in November 2015, allegedly due to Russia testing out its electronic warfare capabilities.

Between 4-9 November 2015, hundreds of domestic and international flights were grounded at multiple airports across Sweden due to its air traffic control system going offline. The attack caused the radar systems to stop working, which made the computer screens to go blank. This meant that air traffic controllers were unable to see any aircraft on their screens at all. Source ibtimes.co.uk 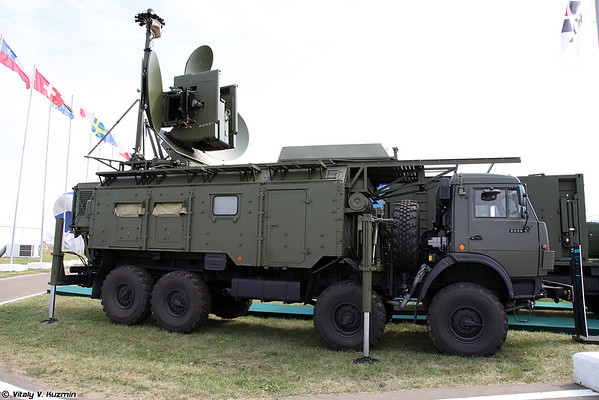 A new and complementary jammer, the 1RL257E Krasukha-S4, is being delivered to the military this year, according to Kret. It is an X-band system designed for use against tactical airborne radars and AGS systems. Both Krasukha systems can operate independently, but are mainly intended to work as part of a multiplatform electronic attack force, with multiple, widely separated jammer locations used to increase the chances of jamming through a target’s main beam. Source w54.biz

The radius of the zone of coverage during suppression of radar systems of tactical reconnaissance aircraft is 11-19 km, of target-acquisition and fire-control systems – 16-41 km, of satellite vehicles – 15-25 km. The deployment time is up to 20 minutes. Source southfront.org

The Joint Air-to-Ground Missile (JAGM) is a U.S. military program to develop an air-to-surface missile to replace the current air-launched BGM-71 TOW, AGM-114 Hellfire and AGM-65 Maverick missiles. The US Army, Navy and Marine Corps plan to buy thousands of JAGMs. Source  wikipedia.org

The declassified, lightly redacted report, published Thursday, says that “increment one” of the Joint Air-to-Ground Missile (JAGM) — a weapon that’s been in development since 1999 — “will not provide critical capabilities needed by the warfighter,” including “the capability to launch missiles from fixed-wing aircraft; strike targets from longer distances; and increase the accuracy, lethality, and interoperability over existing air-to-ground missiles.”

Even if you don’t work in the defense industry, you’ve likely heard of the Hellfire missile, as it was the first weapon deployed during Desert Shield/Desert Storm operations when it was launched from an Apache helicopter in 1991.

The Hellfire has served the military well for many years, but a new missile will soon enter the force. The Joint Air to Ground Missile is in the engineering and development phase. Redstone Test Center is supporting local project managers with technical and engineering testing expertise and capabilities.

“As a part of Team Redstone, RTC is proud to play a role in the development, testing and delivery of new capabilities in support of the American warfighter,” Redstone Test Center Commander Col. Patrick Mason said.

In addition to the PQT, both the Gray Eagle, an unmanned aircraft system, and the Apache helicopter will be used to conduct the missile’s flight testing. Source theredstonerocket.com

The Lockheed Martin JAGM has a multi-mode guidance section with semi-active laser (SAL) sensor for precision-strike and a fire-and-forget millimeter wave (MMW) radar for moving targets in all-weather conditions.