“The shock wave was so powerful that we could hear the tremble of the bunker from where we watched the test. Also, a car alarm system was set off a few kilometers away due to the grenade launcher firing,” journalists said.

Unveiled in 2007, the RPG-28 is designed to defeat modern and future tanks as well as fortified infantry with advanced reactive and composite armor.

The 12-kg RPG-28 has a larger diameter round which allows it to achieve higher armor penetration performance. The grenade launcher’s round is a 125-mm tandem shaped charge with a range of 300 meters.

The project aimed to develop an expendable man-portable rocket-launcher with the maximum penetration of armour of advanced main battle tanks, while preserving acceptable weight and dimensions. The RPG-28 can also efficiently kill enemy manpower in defensive fortifications and buildings. The rocket launcher is designed to boost combat capabilities of Army units.

In order to increase penetration the calibre of the main warhead of the PG-28 round was increased up to 125 mm. The precursor charge with a piezoelectric fuse, just like that of the RPG-27, detonates when the round hits the ERA, destroys it, and sends a pulse to detonate the main warhead. At the same time a shaped-charge jet forms after the ERA is defeated, thus, the ERA explosion does not deform the shaped-charge jet of the main warhead and does not reduce its penetration. As a result, the PG-28 rocket is capable of defeating protection of any modern main battle tank.

An increase of calibre brought the weight of the RPG-28 up to 12 kg. The effective range of fire amounts to 300 m. It lakes three simple actions to set up the rocket launcher from the travelling position or tear it down from the combat position A heavier weight and a greater length of the RPG-28 have decreased the manoeuvrability of the rocket launcher operator, as compared with that of infantrymen, firing RPG-26S. However, the deterioration of the above-mentioned characteristics is totally offset by the boosted ability to kill targets, fitted with ERA.

Multi-function pod with a laser designation function to provide a day/night smart weapons guidance capability as well as a full suite of sensors for navigation and airto-
air target identification roles.

BAE Systems has been awarded a contract to produce new Assault Amphibious Vehicles (AAVs) for the Japanese Ministry of Defense. This contract supports the ongoing development of an amphibious capability within the Japanese Ground Self Defense Force.

“We’re proud to support the Japanese military’s recapitalization by providing this enhanced amphibious capability,” said DeanMedland, vice president of programs at BAE Systems’ Combat Vehicles business. “As the original equipment manufacturer of the AAV fleet, we have a strong history of supporting this platform.”

BAE Systems will provide 30 new AAV7A1 Reliability, Availability, and Maintainability/Rebuild to Standard (RAM/RS) vehicles, plus supply tools and test equipment to support maintenance. The company will also provide training aids for the vehicles to the Japanese military.

The AAV7A1 RAM/RS variant provides a more powerful engine and drive train, as well as an upgraded suspension system, allowing the new vehicles to meet or exceed original AAV7A1 performance. The variant also provides improved mobility, command, control, and repair capabilities while transporting troops and cargo from ship to shore.

Work on the contract will take place at BAE Systems’ York, Pennsylvania facility. Production is expected to begin in August with vehicle deliveries beginning one year later. Final delivery to Japan is expected to take place by the end of 2017.

The AAV7A1 family currently serves as amphibious troop transport vehicles for the United States Marine Corps (USMC). It is used to ground surface assault components and equipment of the landing forces in a single lift from assault ships during amphibious operations. It also supports mechanised operations ashore.

The AAV7A1 of the USMC are often referred to as Amtracks.

The AAV7A1 features a vessel-shaped hull. The headlight clusters are housed in a square recess. The improved versions are fitted with new instrument panel, a night vision device and a new ventilation system.

The weapon station allows the gunner to engage targets within 1,500m range and to traverse a full 360° at a speed of 45° per second.

The AAV7A1 is also installed with auto fire suppression and NBC protection system for enhanced survivability.

The AAV7A1 is powered by a 400hp turbocharged multi-fuel, liquid cooled V-8 diesel engine coupled to a HS-400-3A1 automatic transmission integrating shifting, steering and braking functions in one unit.

The two 14,000gpm water jet pumps provide a cruising speed of 9.7km/h on the sea and the ability to negotiate 10ft plunging surfs flowing towards sea or shore. 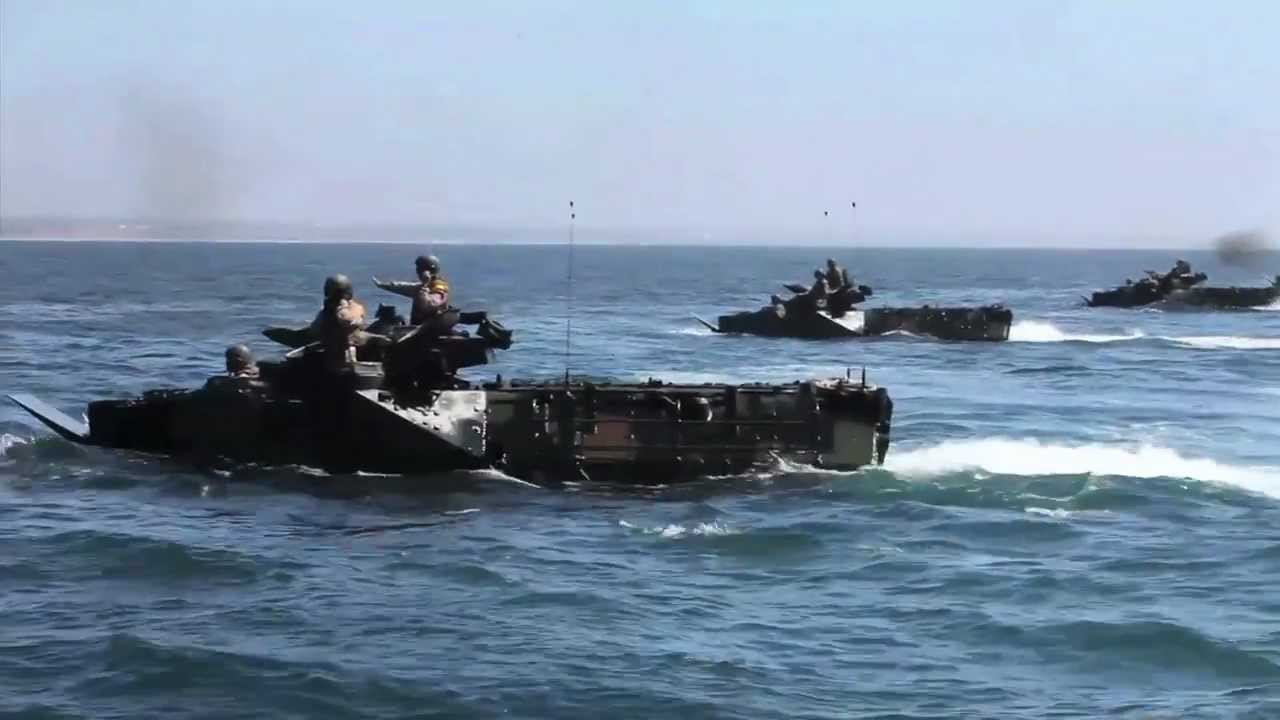 The flat track torsion bar suspension system with heavy-duty shock absorbers provides excellent mobility over all terrains at a top speed of 72.4km/h.