The HTMS Krabi offshore patrol vessel is built by Thai naval shipbuilder Bangkok Dock under a licensing agreement with BAE Systems, to meet the specific operational requirements of the Royal Thai Navy (RTN).

The vessel is intended to conduct routine patrols, border control and fishery protection missions in Thailand’s exclusive economic zone (EEZ) and can also be deployed to perform disaster relief operations and natural resources protection in the Gulf of Thailand and the Andaman Sea.

BAE Systems signed a technology transfer agreement with Bangkok Dock to supply the 90m offshore patrol vessel design for the construction of HTMS Krabi in Thailand in June 2009.

Keel laying ceremony of HTMS Krabi (551), worth THB2.8bn (approximately $79.2m), was held in August 2010 and the vessel was launched at Mahidol Adulyadej Naval Dockyard in November 2011. It was inducted into the RTN’s service in August 2013 and has completed 1,000 days of operation at sea.

In January 2016, BAE Systems received a contract from Bangkok Dock to provide design and engineering support for the second 90m offshore patrol vessel, which is estimated to cost THB5.5bn (approximately $155m).

Design and features of Krabi vessel

The vessel is operated from the navigation bridge, located amidships. The marine radars and communications systems are attached at the top of the bridge. 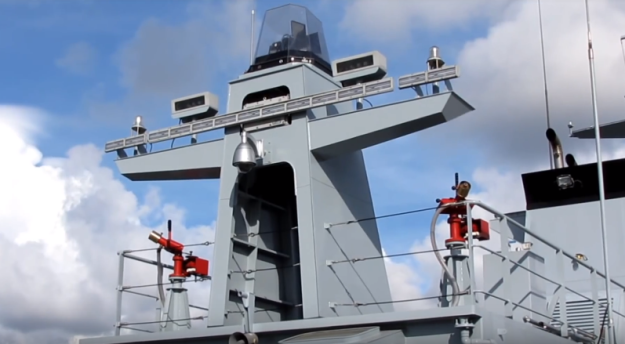 A large 20m flight deck at the aft section supports the operation of a Super Lynx multi-purpose military helicopter. The vessel also carries a rigid hulled inflatable boat (RHIB) on both sides to perform patrol and transportation tasks.

The OPV is installed with air-conditioning and electrical systems, storage and accommodation facilities, as well as a crane to lift equipment. 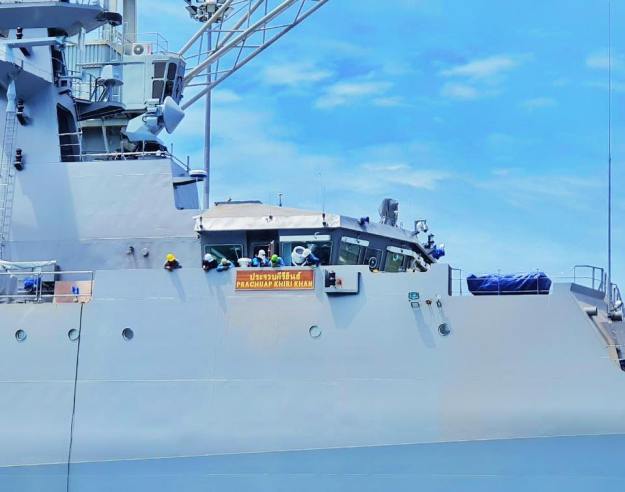 Today (25 June 2019) 09.30 hrs. Admiral Chatchai Sriworakhan, Chief of Naval Staff as Chairman Bangkok Garage Company Limited is the Chairman of the Board of Directors of Bangkok Garage Company Limited No. 6/2562 at the Mahidol Adulyadej Navy Naval Department, Sattahip District, Chonburi Province After the meeting of the Chief of Naval Staff As Executive Chairman Led the board And related persons Check the progress of building a royal boat, Prachuap Khiri Khan and prepare At the ceremony, leaving the Royal Navy Khan overboard by the current in the ship building progress to more than 90 percent . HMS. Khan  HTMS Prachuap Khiri Khan offshore patrol (ship kg.)  A Offshore Patrol Vessel (, OPV).  Motto  “Brave Frontier ”  “Frontier, Fearless” Credit Photo: WO552  By Admin. Source aagth1.blogspot.com

The navy will build its second offshore patrol vessel, this one to be armed with guided missiles, at an estimated cost of 5.5 billion baht.

The second offshore patrol vessel would be developed from the design of the first OPV, which was based on a design by BAE Systems Ships Co of England, he said.

The navy had signed a contract to buy the vessel’s design and materials from Bangkok Dock Co, a state enterprise under the Defence Ministry. The Mahidol Naval Dockyard of the Naval Dockyard Department would build the vessel and the Naval Ordnance Department will be responsible for its weapons systems. Source Bangkok Post 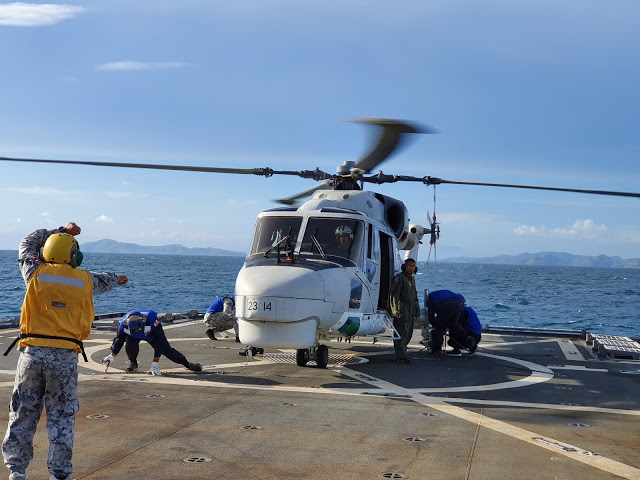 Aside from the BAE Systems’ enhanced design, the ship has helipad capable to accommodate the 11.5-ton helicopter or S-70B in RTN. RGM-84 Harpoon will be installed on board the ship and most of electronic systems are from Thales. Source TAF 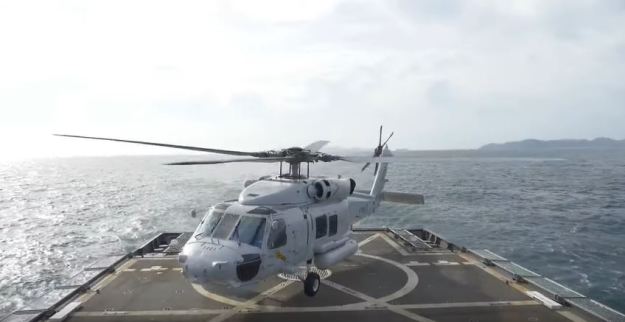 The Royal Thai Navy (RTN) has laid down the keel for its second 90 m offshore patrol vessel (OPV), which it is building in collaboration with BAE Systems.

The keel laying ceremony was held on 23 June at the RTN’s Mahidol Adulyadej Naval Dockyard in Sattahip, Chonburi, a facility managed by state-owned company Bangkok Dock.

An Oto Melara 76mm lightweight naval gun, developed by Italian OTO Melara, is installed on the bow. With a rate of fire of 120 rounds a minute, it is designed to provide defence against shore-based targets.

The revolving ready-ammunition magazine for one of the 76mm gun mounts.

Features and Options include:-

The second patrol vessel in the class can be equipped with a RGM-84 Harpoon anti-ship missile.

Main gun will be Oto Melara 76/62 compact stealth shield and two MSI-DSL/ATK 30 mm DS30MR Mk.44. There are also an preparation for the anti-ship missile to be installed. RTN is looking at the RGM-84D Harpoon, but if there is any export ban RTN will shift to C-802A instead. But ThaiArmedForce.com believe that the Harpoon deal, if it is exist, will go through consider United States just approve the additional sale of RIM-162B ESSM to the RTN. The two Terma DL-12T will make this ship the first RTN ship that capable of avoiding the anti-ship attack. 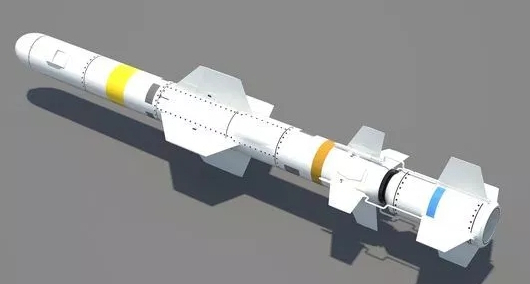 The Harpoon is an all weather, subsonic, over the horizon, anti-ship missile which can be launch from surface ships, submarines and aircraft. Its guidance system consists of a 3-axis integrated digital computer/ radar altimeter for midcourse guidance, and an active radar seeker for the terminal phase of the flight.

The Harpoon flies at subsonic speeds, with a sea-skimming flight trajectory for improved survivability through reduced probability of detection by enemy defenses. It was designed to strike enemy ships in an open ocean environment.

The ship launched RGM-84 Harpoon was introduced in 1977, as well as the encapsulated submarine launched UGM-84.

The Sigma 40 inertial navigation system is making use on laser gyro technology. An advanced system designed by Sagem for maritime applications, the Sigma 40 meets the most demanding navigation and weapon system stabilization requirements.

Both an inertial attitude and heading reference system, the Sigma 40 offers high performance and precision for all sizes of surface vessels. Both compact and robust, the Sigma 40 delivers all data needed for navigation: heading, roll and pitch, angular velocity, position and heave, vertical/horizontal speed and acceleration.

The Sigma 40 is suited to all types of platforms, including fast patrol boats, mine-hunters, corvettes, frigates, aircraft carriers, etc. It comprises an inertial navigation unit (INU), control and display unit (CDU) and an installation bracket, for fast removal and reassembly without recalibration. Both innovative and scalable, the Sigma 40 is easy to install, maintain and operate. Source safran-electronics-defense.com

The main features of RLG Sigma 40 are :

The RLG Sigma 40 system contains four basic sub-units. They are as follows:

The Inertial Sensor Block (BSI) consists of the various sensors. They are : 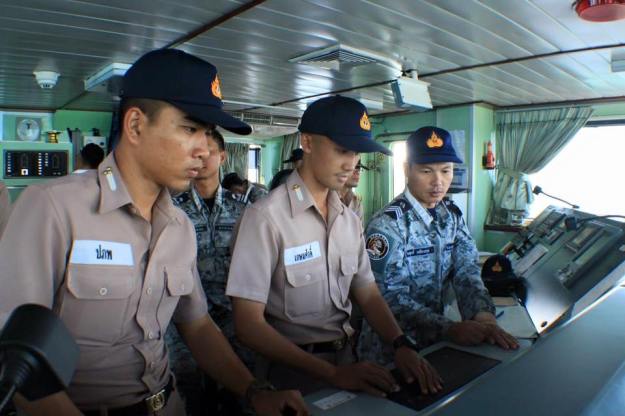 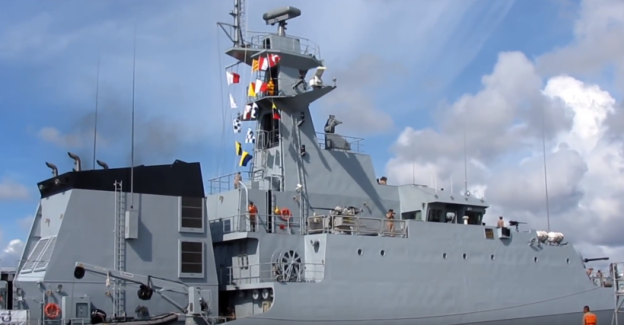 LIROD MK2 is a flexible and compact sensor system, most suitable as an accurate, low cost, all-weather tracker for fire control systems.

The system has been designed for as the primary gun control system onboard of smaller ships, against both surface and air targets, and as a secondary system in larger configurations. With an appropriate gun, it is suitable for CIWS functions. LIROD Mk2 is also capable of controlling short-range missiles.

The radar system operates in the K-band, and applies a new, powerful TWT transmitter to improve the performance under adverse conditions. The antenna is of an ellipsoid design to achieve the best low elevation performance against sea-skimming targets, while maintaining fast target acquisition against manoeuvring targets.

LIROD Mk2 has been purchased by the navies of Indonesia, Turkey, Greece, Morocco and Thailand. Source thalesgroup.com

VARIANT is a multipurpose, short/medium range 2D radar, simultaneously operating in the X and C-band for air and surface surveillance. It can track surface targets up to 70km and air targets up to 120km. Its principal role is as an automatic, fast reaction time radar sensor supplying targeting data to weapon systems. Its extensive features make VARIANT the answer in modern warfare, littoral and asymmetric threat environments. VARIANT provides air tracks without any operator intervention (auto target initiation and tracking). For surface targets, three fire control channels are available to support direct target engagement. The system is completed by an integrated Low Probability of Intercept (LPI) surface surveillance radar (SCOUT). 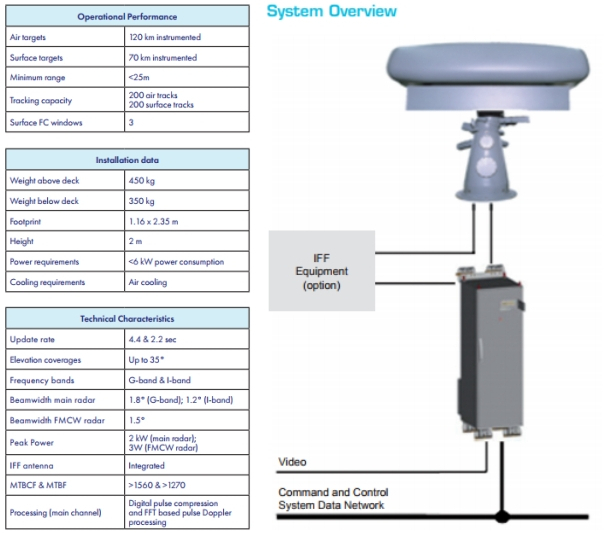 No single point of failure

Royal Thai Navy is on the preparation process of building its new OPV, the second of the Krabi class, and they still choosing Thales Nederland as lead system and combat system integrator. The second ship will have a higher capability. 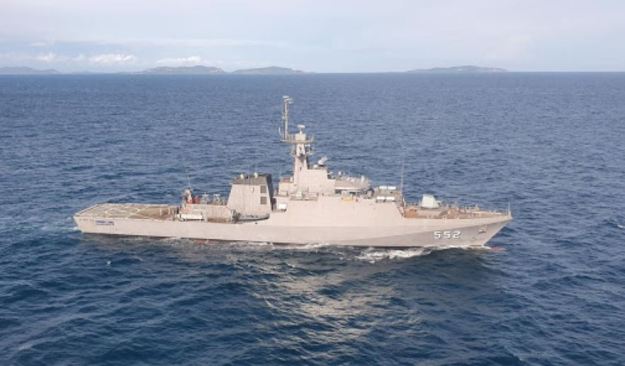 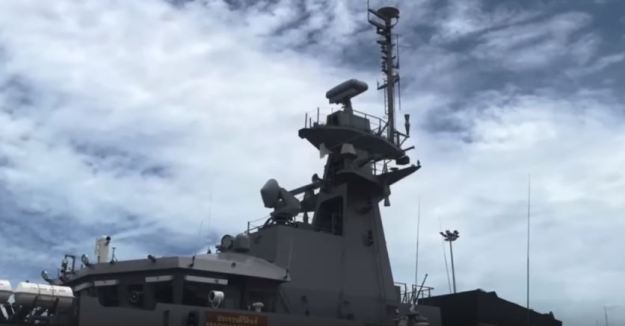 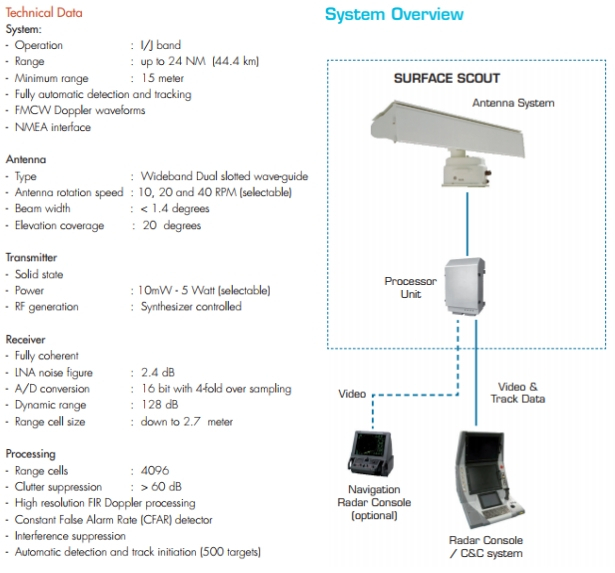 STING-EO Mk2, Thales’s lightweight dual band (I and K) weapon control system, supports gun fire control, performs kill assessment and makes a valuable contribution to classification and identification of threats. In addition, the system can be used as a surveillance sensor, even under radar silence conditions.

For operation in the littoral environment, STING EO Mk2 offers a list of benefits, such as: superior stealth target detection in strong (land) clutter, higher resistance against more stressing jamming scenarios and an extended EO capability for target identification and observation.

The system provides real, multiple, instantaneous radar acquisition and handling of up to 500 tracks. Also adaptable library generation by flexible programming and “on task” modification/updating capability to maximise the ability to cope with new tactical situations is provided.

When coupled with the Scorpion ECM system, this system provides a powerful EW suite capable of responding to any threat with very low latency. 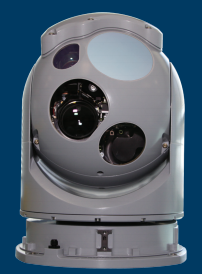 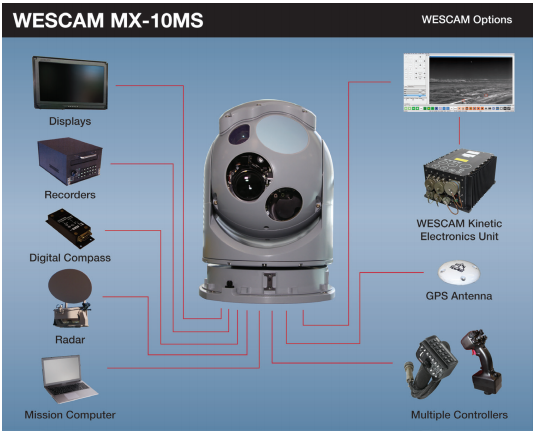 In the presence of sea or rain clutter, our VisionMaster FT Radar scanner features advanced clutter suppression technology that automatically detects small, weak targets without the need for adjusting controls.

Rather than manually acquiring targets, the ARPA scanners automatically and safely acquire and track targets at relative speeds up to 150 knots.

An optional digital Interswitch allows the operator to display radar video from any scanner at any desired display. For improved user operation and flexibility, interswitching gives up to six transceivers and up to six displays

To reduce cost and time required for retrofit, our VisionMaster FT Radars are compatible with the BridgeMaster-E product line by partial hardware and software replacement.

Settings can be customized for different watch officers, with voyage plans and operating systems that can be saved and moved to different vessels, offering flexibility, control and safety.

The ADS-B and AIS are also believed to be install on board. 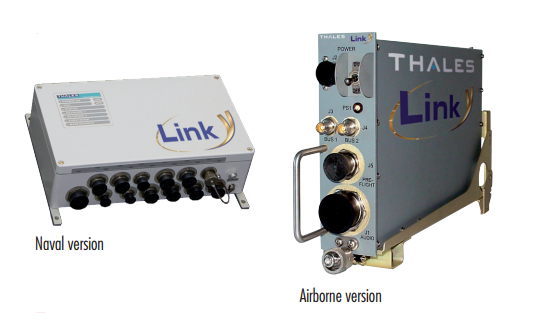 Link Y Mk2 is built in a compact housing compliant to military standards that meet the requirements for equipment in a naval environment. The naval version is to be integrated into any Combat Management System, e.g. TACTICOS, for surface vessels or submarines. Alternatively, the naval version can be delivered with a local control station to act as a standalone system on board. Source thalesgroup.com 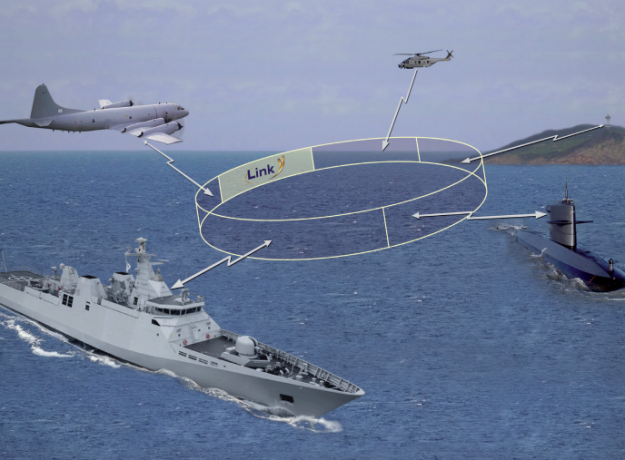 The Royal Thai Navy will be equipped with the LRAD 500 X to support Law Enforcement at Sea, HMS Trang or the far offshore patrol. At present, the vessel is being operated by the Royal Naval Hospital Mahidol. The supplies In the shipbuilding. The LRAD 500 X Long Range Acoustic Device (LRAD) will be installed in support of marine law enforcement. It is the first ship. To install the device, use it with HMS Krabi.

The LRAD 500 X is a Non Lethal Weapon that can be used on land (car or building), aircraft and ships. Portable for convenience and storage. For a simple explanation, the LRAD 500 X is a huge amplifier. Low power The sound waves can be amplified. For crowd control In some countries, the LRAD 500 X is allowed to be used in ships.There are at least 4 data ships that survive the pirate attacks with the device.  Source thaidefense-news.blogspot.com

The IPMS provides integrated monitoring and control of ship propulsion, electrical and auxiliary plant management systems. Integrating these capabilities at the platform level can optimise operational effectiveness and contribute to crewing reductions.

Two controllable-pitch propellers are fitted aboard that provide better efficiency and high-manoeuvrability.