Hyundai Rotem, an affiliate of the Hyundai Motor Group, is developing the K2 Black Panther main battle tank (MBT) for the Republic of Korea Army (ROKA). The MBT is intended to provide improved performance in the 21st century network battle environment by employing improved ergonomics and digitalisation.

Rotem introduced the vehicle along with its wheeled armoured vehicles and unmanned weapon systems at the Seoul Aerospace and Defence Exhibition (ADEX) at the Seoul Airport in Seongnam City, Kyeonggi Province, in October 2009. The tank is expected to enter into service in 2014.

The K2 Black Panther is a new type of high tech battle tank and will replace K1 series of vehicles and M48 tanks. The new MBT features enhanced mobility and fire power compared to the K1 vehicles, and is regarded as one of the best main battle tanks in the world.

The K1 has been operational in the RoK Army since 1986 and is known as the Republic of Korea Indigenous Tank or ROKIT. Following early design work based on US M1 technology, the K1 tank was designed and produced by Korea. The manoeuvrability of the tank is optimised for the varied geographical features of Korea, which include mountainous terrain, jungle, paddy fields and swamp.

The commander’s panoramic sight has three modes of operation: align with the main armament, independent tracking and gunner override. The commander has the option of handing off the target to the gunner or of slaving the gun to the commander’s sight and initiating the fire. The K1 has demonstrated a first round hit probability of greater than 90% when firing on the move at a moving target.

The Kl is equipped with a turbo-charged 1,200hp MTU MB 871 diesel engine providing a power to weight ratio of 23.5hp/t.

MB871 Ka-501 engine, with 1200ps at 2600rpm 8-cylinder version, and MT881 Ka-500 engine, 8-cylinder version, has been locally produced by STX since the year of 1986 under the manufacturing license from MTU, Germany. These engines are not only best optimized for the military vehicles with its size compactness and lightness but also provided superior operational economics mainly thanks to the comparably lower fuel consumption rate, longest MTBO and well-organized logistics system. @army-guide.com

The transmission has a planetary gear train and a hydrodynamic torque converter. In high gear, the Kl can attain a maximum road speed of approximately 65km/h. The low ground pressure of 0.87kg/cm² enables it to successfully manoeuvre in sodden or sandy terrain.

The Kl has hydro-pneumatic suspension and torsion bar springs. The suspension system also provides vehicle attitude control or ‘kneeling’ capability, which increases the main gun depression angle to a maximum of minus 10°. @army-technology.com

The K2 MBT design was completed in 2006. Rotem signed a co-operation agreement in March 2011 with the subcontractors of K2 MBT and provided KRW12.8bn ($12m) to solve the financial difficulties caused by delays in the mass production of the vehicles.

Rotem signed a contract with the subcontractors in November 2011 to offer emergency operating funds totalling KRW3bn ($2.65m). The mass production of K2 MBTs was further delayed due to technical defects in engines and transmission.

In July 2008, Rotem signed a technology cooperation deal with Otokar to provide technology systems of the K2 MBT for the development of Turkey’s Altay Main Battle Tank. The first prototype of the Altay MBT is expected to be ready by 2015.

Rotem will provide the main equipment for Altay upon completion of the K2 MBT’s development.

The K2 Black Panther MBT has a crew of three members including commander, gunner and driver. The vehicle is 10.8m long, 3.6m wide and 2.4m in height. The ground clearance of the vehicle is 0.45m and the combat weight is 55t.

Armament of the K2 Black Panther

The main armament of the K2 Black Panther is a 120mm L/55 smoothbore gun with automatic loader. The autoloader ensures the loading of projectiles on the move even when the vehicle moves on uneven surfaces. The 120mm gun can fire about 10 rounds per minute.

The Black Panther is armed with a Rheinmetall 120-mm/ L55 smoothbore gun. This gun is license-produced in South Korea. @military-today.com

The secondary armament of the tank includes a 12.7mm heavy machine gun and a 7.62mm machine gun.

It also has a very advanced fire control system, allowing to track and engage not only the main battle tanks, but low-flying helicopters as well. Maximum effective range of fire is up to 10 kilometers. Furthermore its fire control system can spot, track and fire automatically at visible vehicle-size targets without needing any input from a human operator.” @military-today.com

“The K2 and Type 10 are the only tanks I heard of that can use DM 53 tier APFSDS in autoloaders, which is amazing considering only DM 43 tier or so was used in the Leclerc. Autoloaders tend to be shafted in terms of penetration from what I can tell, usually because the ammo is too long for the autoloader.” @aw.my.com

“The gunner is seated on the left side of the turret with the commander to his right. Gunner has a dual-axis stabilized sight with auto-tracking capability and the commander has a panoramic stabilized sight to allow hunter-killer type operation. Turret has an onboard ammunition capability of 16 120mm rounds. Additional 24 rounds are stored in the hull.” @WARFARE TECHNOLOGY 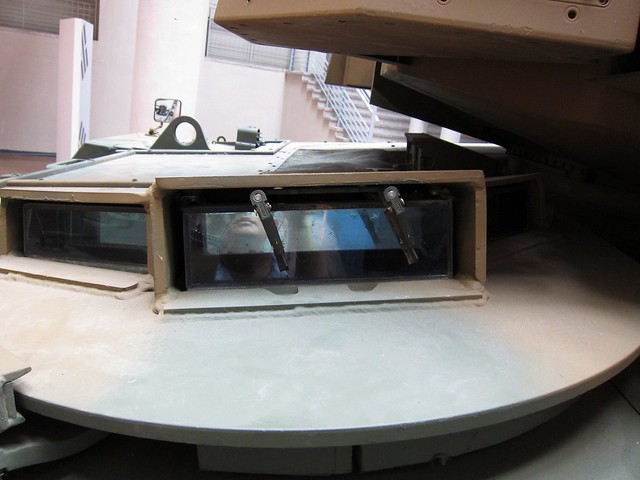 See video below for comparison of tank autoloader’s

“The 120-mm gun can fire variety of munitions. It is compatible with all standard NATO tank rounds. It is also capable of firing the new KSTAM (Korean Smart Top-Attack Munition) rounds. These are smart target-activated fire-and-forget projectiles, but shouldn’t be confused with anti-tank guided missiles. The KSTAM has its own guidance system, aided by four stabilizing fins. At the final stage a parachute will deploy to slow its fall and accurately engage target. Such principle is broadly similar to mortar-launched anti-tank munitions. Furthermore the K-2 tank can fire KSTAM munitions from behind the cover. The KSTAM has a maximum effective range of 8 kilometers.” @military-today.com

“Basically a guided anti-tank mortar munition, the KSTAM flies with the energy applied to it from the firing of the munition from the main gun. It does not possess any kind of propellants, and should not be confused as a missile or a rocket. The trajectory of the munition is curved, giving it a mortar- or artillery-like capability to strike targets taking cover behind obstacles. Its main use is to destroy entrenched and/or covered enemy vehicles that are unreachable with regular anti-tank shells due to the restrictions in terrain and/or hazards imposed upon the friendly vehicle.” @wikipedia.org

Sensors and other systems of K2 Black Panther 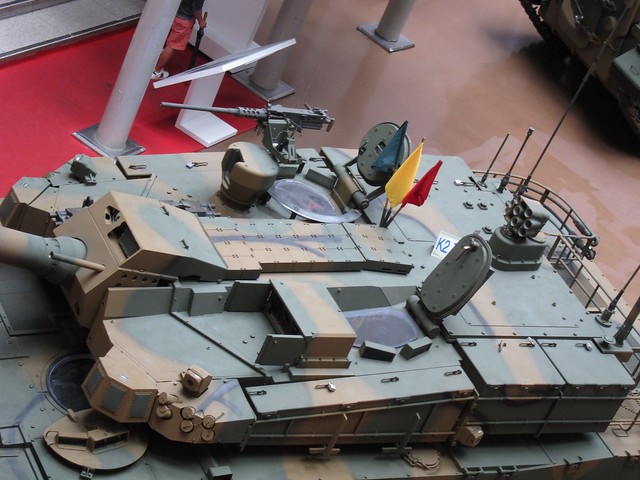 Self-protection of the South Korean MBT

The K2 MBT is fitted with Composite Armour and Explosive Reactive Armour (ERA). It also consists of a collective nuclear, biological and chemical (NBC) protection system. The ammunition compartment is equipped with a blow-off panel for protecting the crew against the explosion of ammunition.

An active protection system is installed on the MBT to provide protection against anti-tank rockets and missiles. It includes soft and hard kill systems.

The K2 Panther is also protected by a fire suppression system. The vehicle has two banks of smoke grenades, each with six launchers. It is also provided with identification friend or foe (IFF) system.

The K2 Black Panther is powered by a MT 833 diesel engine from Tognum. The engine generates 1,500hp and provides a power to weight ratio of 27.3hp/t. The fully automatic transmission of the vehicle includes five forward and three reverse gears.

The vehicle has an in-arm suspension Unit (ISU), which enables the tank to successfully manoeuvre on soft soil and terrains with obstacles. The MBT has an off-road speed of 50km/h and can attain a maximum speed of 70km/h on road. It can traverse a maximum range of 450km on road and ford at a depth of 4.1m in water.

The vehicle is also equipped with a dynamic track tension system (DTTS) as well as roll, pitch and bounce control system.