Embraer (Empresa Brasileira de Aeronáutica), one of the world’s largest aircraft manufacturers, received a $1.3bn development order from the Brazilian Air Force (FAB) for its KC-390 medium-weight military transport jet on 14 April 2009. The new high-wing aircraft is expected to fly in 2014 and enter service by the end of 2016. With the launch of the KC-390, competition in the 20t air transport segment has intensified. 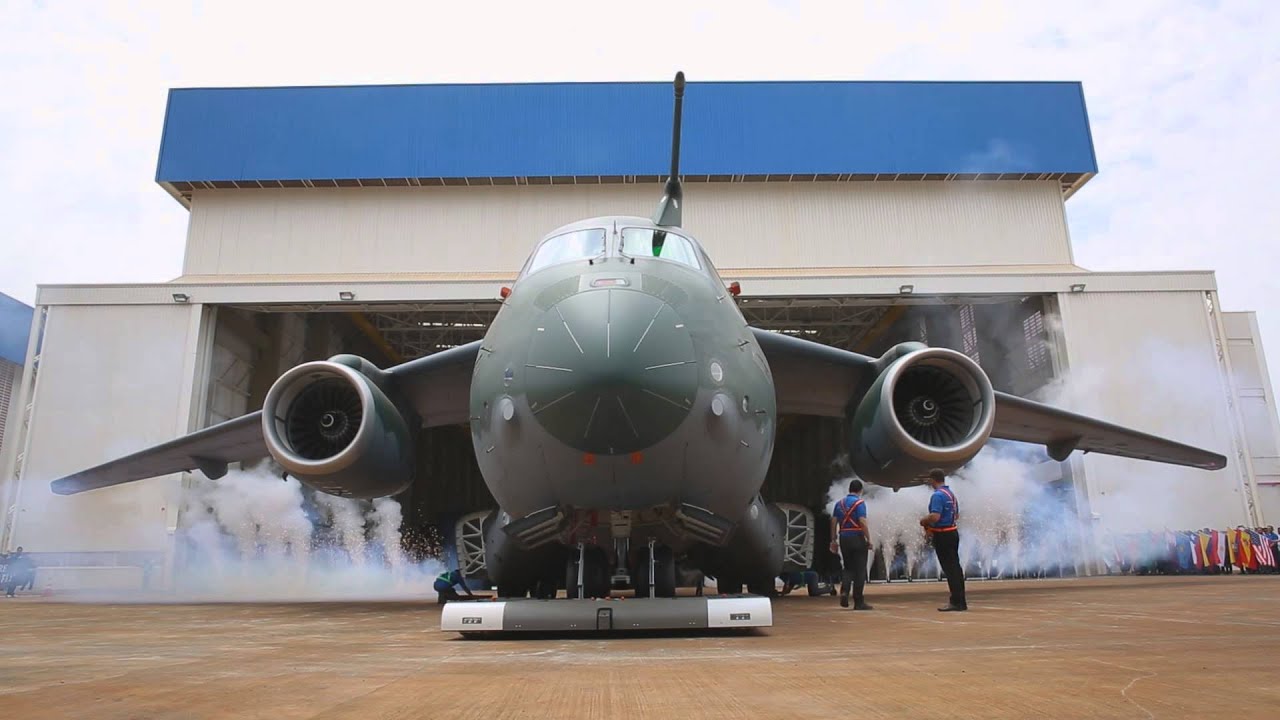 The first prototype rolled out from the Embraer subsidiary plant, Embraer Defense and Security, at Gavião Peixoto, São Paulo on 21 October 2014, and flew for the first time on 3 February 2015. Source wikipedia.org

Features of the KC-390 will be in compliance with the new National Defence Strategy and meet the needs of the FAB. The new aircraft will replace 22 Lockheed Martin C-130E/H and KC-130 that are currently a part of the FAB.

National Aeronautical Enterprise Empresa Nacional de Aeronautica (ENAER) of Chile signed a contract with Embraer in August 2010 to jointly build the KC-390 aircraft for the Chilean Air Force (CAF). About six KC-390 will be procured by the CAF. 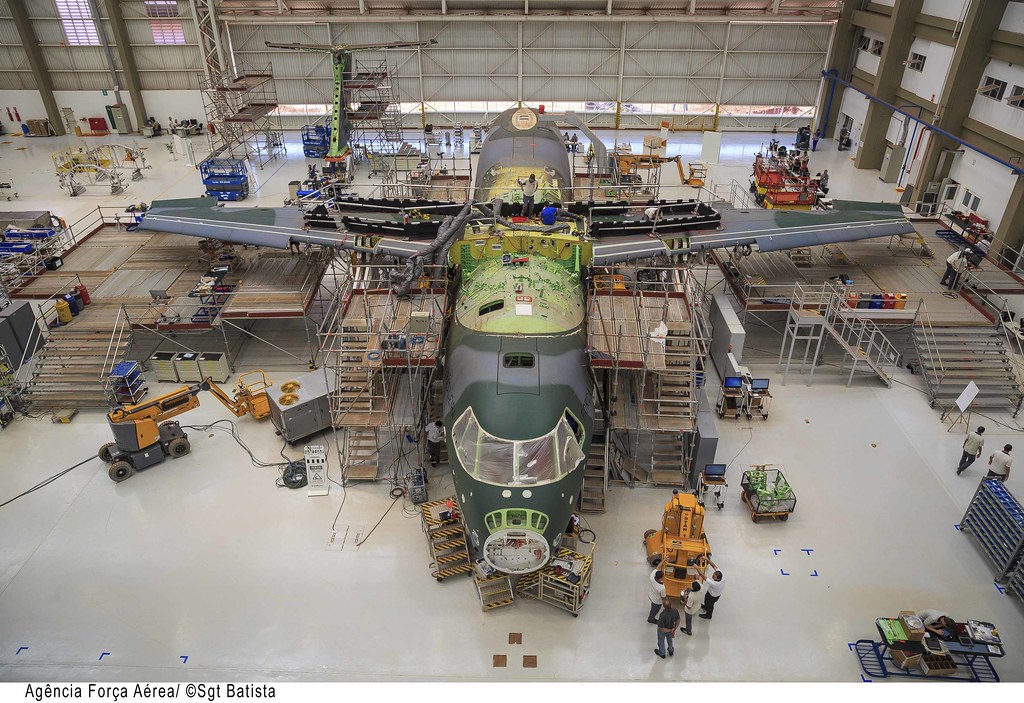 The Brazilian Air Force expressed its desire to acquire the KC-390 aircraft at the 47th Farnborough International Airshow held in England in July 2010 and signed the series production contract for the aircraft in May 2014.

As part of the R$7.2bn ($3.3bn) contract, the company will supply 28 KC-395 aircraft over a period of ten years. The contract also includes a logistical support package including spare parts and maintenance.

The Brazilian military has awarded Embraer a provisional type certificate for the basic configuration of the KC-390 tanker-transport, a step on the way to achieving initial operational capability with the air force in the second half of 2017.

The Portuguese government authorized the Ministry of Defense to begin the process of acquiring five Embraer KC-390 aircraft with purchase option for an aircraft, in addition to its logistical support and flight simulator in a 500 million dollar agreement. In addition to military activities, aircraft will be deployed in firefighting.

KC-390 returns to base early after stall test

Crew on an Embraer KC-390 requested an early return to base after the aircraft completing a stall test earlier this month, the Brazilian manufacturer says.

As part of Embraer’s flight certification efforts, a prototype KC-390 transport aircraft conducted a stall speed test on 12 October. But decreased lift force caused an altitude loss that would prematurely call the KC-390 crew back to base, Embraer tells FlightGlobal in a 23 October email.

Embraer declines to answer additional questions about the circumstances of the test flight on 12 October or the aircraft’s status since then. The flight tracking website Planefinder.net has not logged a new flight by the KC-390 prototype, PT-ZNF, since 12 October.

The tactical transport and tanker aircraft are slated to enter service in 2018 with plans to deliver the first two production aircraft to the Brazilian air force that year. The air force plans to take on 28 aircraft total, with two deliveries in 2019 and three deliveries in subsequent years. Source flightglobal.com

The Curious Case Of The KC-390 And Flight Tracking: Here

On Thursday morning, October 12, as part of the flight test campaign for certification, a prototype of the KC-390 multi-mission transport aircraft performed stall speed flight tests, which resulted in aircraft altitude loss due to decreased lift force.

The Embraer KC-390 protoype involved in a stall speed incident on 12 October has not been significantly damaged and is set to return to flight testing following minor repairs.

#Embraer and SkyTech sign letter of intent for up to six KC-390 multi-mission aircraft https://t.co/8NEUgpuk55 pic.twitter.com/GEN8nZ0XHq

The twin-turbofan-powered KC-390 can be refuelled in flight and can be used for in-flight or on-ground refuelling of other aircraft. The new 20t jet is technically advanced and has fly-by-wire technology, which optimises mission results thereby reducing pilot workload. It also helps increase the safety and capability for operating on short and rustic runways.

KC-390 can be refuelled in flight and can be used for in-flight or on-ground refuelling of other aircraft. Fuel probe is above the cockpit. – Image: defenseforces.com

The military aircraft will have a cargo bay equipped with an aft ramp similar to Hercules, and capable of transporting a wide variety of cargo (weighing up to 19t), including armoured vehicles.

It will be outfitted with state-of-the-art loading and unloading systems for handling cargo.

A study on the KC-390 (earlier named C-390) aircraft was presented at LAAD 2007. The research and development expenses of C-390 were $600m and shared among Embraer and various partners led by the FAB.

The twin-engine jet-powered Embraer KC-390 also integrates the technological solutions developed for Embraer 190 commercial aircraft. It is expected to carry 84 military personnel and the cargo cabin will be configured for transporting the wounded or sick, on medical evacuation (MEDEVAC) missions. It will also be used for in-flight refuelling, search and rescue missions.

The KC-390 is the largest and most complicated aircraft ever undertaken by Embraer. It will also be the Brazilian manufacturer’s first new military product in more than a decade. It is expected to be assembled at Embraer’s Gavião Peixoto plant in Brazil.

Considering the delays in the production of Airbus A400M military airlifter and the time taken by Lockheed Martin to achieve full operational capability with the C-130J, both Embraer and its competitors say that developing KC-390 will not be easy.

Although the Brazilian government will be funding, any delay in the development would weaken Embraer’s defence growth.

Embraer Defence and Security has achieved a significant milestone in the KC-390 tactical military tanker and transport aircraft program by demonstrating the Cobham aerial refueling systems installed in KC-390’s prototype 001.

The fourth generation 900E series pod family represents the most proven solution in probe and drogue air refuelling in operational service today. The advanced features of the 900E series pod provide high levels of performance and flexibility in support of the modern war fighter

Participation of other countries and companies in this programme is being evaluated in consultation with the FAB.

Boeing and Embraer signed an agreement to co-operate on the KC-390 aircraft programme in 2012.

The FAB and Embraer concluded the Critical Design Review (CDR) of the KC-390 aircraft in March 2013. The definitive aerodynamic and structural configurations as well as the architecture and systems installations were confirmed for the immediate production of the first prototype aircraft with the first flight scheduled in the second half of 2014.

Rockwell Collins signed an agreement with EDS in May 2011 to supply its Pro Line Fusion avionics systems for the aircraft. The avionics system will render improved situational awareness and decrease the workload of the pilot.

The KC-390 instrumentation panel is dominated by several LCD screens that use Pro Line Fusion aviation architecture. It is one of the most advanced and ergonomic cockpits on the global market today, using Fly –by-Wire (lateral joystick) technology. (Roberto Caiafa/Diálogo)

Our innovative approach to systems integration offers an open architecture that provides the flexibility and growth you need to meet evolving airspace requirements and take advantage
of new technologies.

The information you want is right at your fingertips to improve operational efficiencies. Capabilities, such as automated database management, checklists integrated with crew alerting system for more efficiency, integrated ATC data link and graphical weather, combine to improve all phases of your flight.

Embraer awarded a contract to BAE Systems on 27 July 2011 to supply and install flight control electronics in the KC-390 transport aircraft.

Selex ES has received a contract from Embraer Defense & Security to provide an undisclosed number of Gabbiano T20 radar systems for the KC-390 transport aircraft procured by the Brazilian Air Force (Força Aérea Brasileira, FAB). Deliveries will begin this year.

Gabbiano is an X-band radar capable of delivering high accurate ISR, search and rescue and patrol missions on sea, coast and land. Based on a solid-state transmitter, it offers high resolution imagery and superior detection ranges. Gabbiano comes equipped with a suite of modes including air-to-sea surveillance with Track While Scan (TWS), high resolution ground mapping (Spot/Strip-SAR), ship target imaging and classification with ISAR and navigation with ground mapping and weather avoidance. It has been selected by ten international customers. The version of Gabbiano which will equip the KC-390 aircraft incorporates radar modes optimised for military transport aircraft.

The production contract from Embraer follows the earlier selection of the Gabbiano to be part of the KC-390’s baseline. The aircraft, which flew for the first time in February, is projected to play an important role in the international tactical airlift market with several countries having confirmed firm and option orders and sales campaigns ongoing all around the world.

IAE, which is majority owned by Pratt & Whitney, says the engines will be used for flight tests that will start in 2014. Embraer is scheduled to deliver the first certificated KC-390 to the Brazilian air force in 2016.

P&W expects civilian certification of the engine will be achieved in the third quarter of this year.

The engines were assembled at P&W’s facility in Middletown, Connecticut, then shipped to parent company UTC’s aerostructures plant in Foley, Alabama, for installation of nacelles, thrust reverses and other equipment, says Pratt.

The selection by Embraer of the V2500-E5 comes as P&W expects to wind down production of the type in the next five years.

The company tells reporters on 20 May that V2500 deliveries will fall as deliveries of its newest engine, the PurePower geared-turbofan, ramps up.

IAE delivered the first three prototype V2500-E5 powerplants for Embraer’s new KC-390 aircraft in early 2014 and the remaining three in May of the same year. The civil certification for the new engine model is scheduled for third quarter 2014. “IAE shipped first KC-390 engines to Embraer” posted May 20, 2014 Source flightpress.aero

“We are delighted to continue our long-standing relationship with Embraer and provide our APS2600[E] APU for the second generation E-Jet,” said Eileen P. Drake, vice president and general manager, Pratt & Whitney AeroPower. “The APS2600[E] APU provides exceptional value to customers by providing increased electric power capability, both on the ground and in flight, a significantly higher operating altitude, and world-class reliability.” Source pw.utc.com

ELEB Equipamentos will design, manufacture and supply landing gear system for the aircraft as part of a contract signed with EDS in March 2011.

It will build a rugged and reliable system that enables the aircraft to operate with heavy payloads and land even in semi-prepared airfields. The KC-390 will be equipped with a double chamber shocker absorber system and modern hydraulic systems.

The Brazilian Air Force ordered 28 KC-390, in addition to the two prototypes.