H145M (earlier known as EC145 T2) is a multi-role twin-engine battlefield support helicopter produced by Airbus Helicopters. It is primarily intended for use by military and law enforcement agencies.

The maiden flight of H145M was completed in November 2014 and European EASA (European Aviation Safety Agency) certification was received in May 2015.

Airbus received a contract from Bundeswehr in June 2015 to deliver comprehensive service support for the H145M fleet, which will enter service with the German Air Force to perform operations with Special Forces Command (Kommando Spezialkräfte). 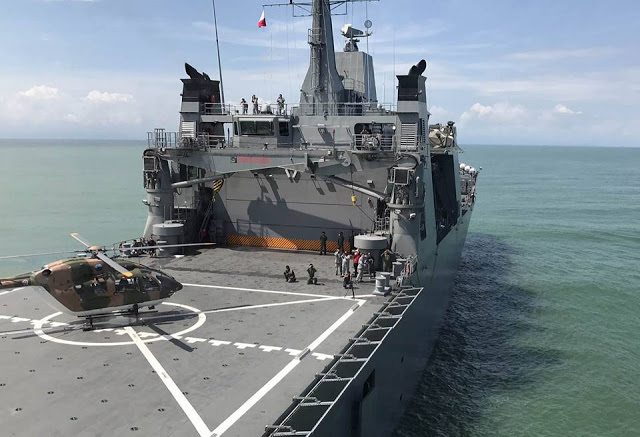 Design of the battlefield support helicopter

The H145M is an economical and versatile military helicopter based on the proven EC145 helicopter family.

On the military market, the H145 may appear like the new kid on the block while in fact it is anything but. Disguised as the UH-72A Lakota and as a replacement for the UH-1 Huey, the type has been serving the US Army for years already in training, transport and liaison roles. A staggering 423 Lakotas were ordered by the US.

In its special ops role, the H145M – advertized as a ‘light battlefield support helicopter’ – offers  room for up to 10 soldiers in the ballistically protected cabin. The sliding side doors and fast rope systems offer quick exit in hover situations, while the double clamshell doors at the rear can also be used when on the ground.The Fenestron shrouded tail rotor offers protection and safety on the ground. Until now, special forces in Germany relied on the – again – UH-1 Huey. Source airheadsfly.com

It features an advanced main and tail rotor gearboxes as well as Fenestron shrouded tail rotor for better anti-torque control. The tail rotor is fitted with composite asymmetrical blades that reduce the noise levels.

The H145M can seat up to 11 personnel including crew and troops. The large cabin space accommodates up to 10 troops in a high-density air assault layout, or a fully-equipped force for special operations.

Troops can rapidly ingress / egress through large sliding side doors and the rear clamshell door. The rotorcraft can be fitted with mission equipment kits including a fast rope system, cargo hooks and hoists for transport and utility missions.

The helicopter has a maximum take-off weight of 3.7t and can carry a useful load of 1,769kg, whereas its sling load capacity is 1,500kg. It measures 13.6m in length when rotors are in operation and has a width of 2.7m when blades are folded. The height and main rotor diameter of the helicopter are 4m and 11m, respectively.

The H145M is equipped with a modern digital glass cockpit that integrates Helionix® avionics suite. This cockpit is compatible with night vision goggles (NVG). It houses a head-up display (HUD) and a helmet-mounted sight display (HMSD) with day and night piloting and firing capability. 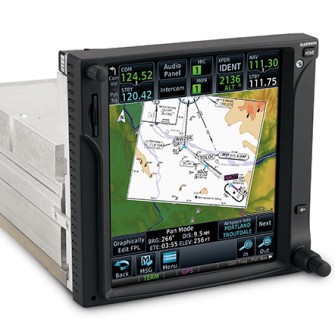 What sets newer H145s, including the German special ops ones, apart from earlier models is the modulair and impressive Helionix cockpit suite which according to Airbus Helicopters offers pilots the world’s most advanced cockpit – apart from the Airbus A350. In the case of the H145, the suite consists of three large MFDs that can all be adjusted for diplaying either basic flight control instruments, engine parameters, digital maps or a range of other options. Two Garmin GTN 750 GPS/NAV/COMM multifunction displays complete the typical Helionix setup in the H145. The system offers a 4 axis autopilot including Auto-Hover function. Helionix will be integrated in all new or updated products of Airbus such as the new H135 and H160. Source airheadsfly.com

Helionix® avionics suite middle of the instrument panel (above) – airbushelicopters.com

Helionix® is a fully integrated system that cuts the amount of required equipment in half, meaning easier maintenance and a significant weight reduction.

With the situational awareness system in the middle of the instrument panel, the pilot can quickly see a digital display of the helicopter’s terrestrial (obstacles, terrain) and aerial (presence of other aircraft) environments. To prevent dangerous situations, the HTAWS (Helicopter Terrain Awareness System) warns the crew well in advance of any land-based obstacles in the vicinity of the current flight path.

The new avionics system includes a centralized maintenance function that monitors the status of all the helicopter’s sub-systems. Troubleshooting can quickly be performed via a ground-based diagnostics tool, and maintenance activities are fully optimized.

The cutting-edge Human-Machine Interface (HMI) displays all flight parameters and flight management data on a single screen. The Part Time Display is a new concept. A summarized version of the flight parameters can be displayed to help the pilot quickly analyze and assess the situation in order to remain fully concentrated on the mission. Source airbushelicopters.com 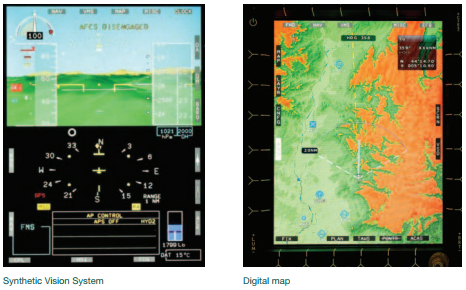 Featured on the military helicopter is a mission computer, an infrared / TV electro-optical system, an emergency locator transmitter (ELT) and a laser range-finder / designator / pointer. The four-axis digital autopilot aboard the cockpit reduces crew fatigue.

The MX-10D and MX-15D are part of a package of modernized systems for Airbus’ H225M and H145M helicopters to support anti-submarine warfare, tactical troop transport, search-andrescue, medical evacuation and special operations.

L-3 WESCAM’s targeting systems have been proven in combat and are configured with high-sensitivity multi-spectral sensors for day, low-light and night time missions.

To date, L-3 WESCAM has delivered over 530 of the MX targeting systems for 40 different airborne platforms since the company entered the targeting market in 2005. Source vanguardcanada.com 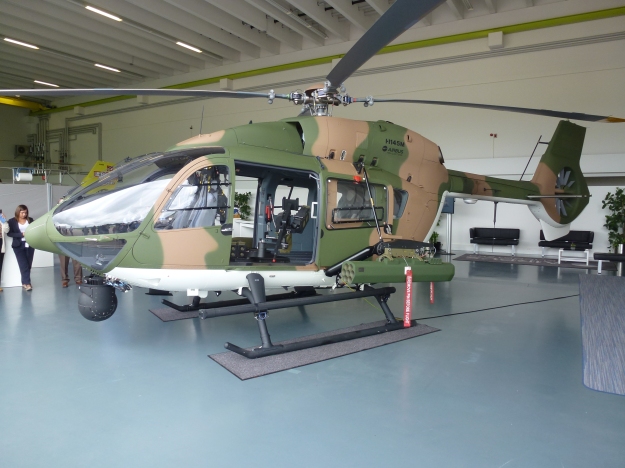 The helicopter can be fitted with an incremental modular weapon system to engage conventional and asymmetric threats in the battlefield.

It is compatible with seven- and 12-tube rocket launchers, a 20mm cannon pod, a 12.7mm machine gun pod, and air-to-surface missiles. It can also be configured to carry laser-guided rockets. 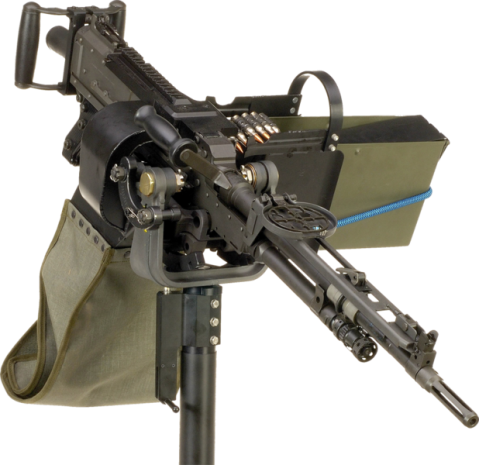 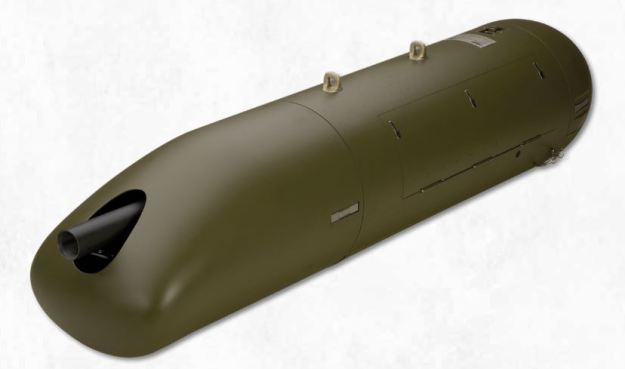 FN has developed a broad spectrum of machine gun pods designed for rotary-wing and subsonic fixed-wing combat aircraft capable of carrying the FN® M3P .50-caliber machine gun and multiple 2.75″ air-to-ground rockets with the FN® RMP variant. FN Pod Systems provide war fighters with a significant firepower advantage in every operational engagement and are in use by a number of NATO nations on both subsonic fixed and rotary-wing combat aircraft.

The FZ275 LGR guided rocket closes the gap between the long-range high-value missiles and the shorter range guns/cannon and unguided rockets, thus affording a full range of precision effects from a platform to defeat soft and light armoured targets.

This rocket complies with the armies’ requirement for precise and reliable ammunitions capable of reducing exposure to danger and avoiding collateral damage which nowadays causes injuries to civilians.

The SAL-Laser Guided Rocket FZ275 LGR requires designation of the target by a laser designator.

The rocket has an in-built laser seeker that can read a specially coded laser being reflected off a target. This target can be marked either before launching the rocket (LOBL), after launch (LOAL) or even by a remote source, such as a soldier on the ground or another second flying platform. This versatility provides the helicopter with a far greater survivability and the ability to attack without moving into a target’s vision.

FZ has developed 2 different configurations for its laser guided rocket :

The NC 621 cannon pod extends the range of missions (attack, close fire support, protection, self-defence) of the helicopters and lightest aircrafts. It provides airplanes with 20mm firepower previously restricted to 0.50 weapons. The NC 621 has been developed around the 20 M 621 cannon which is well known for its high accuracy, for simplicity (operation and maintenance) and which fires the 20mm x 102 NATO standard ammunition. The effectiveness and reliability of the NC 621 has been widely proven on various platforms.

Serbia to be launch customer for HForce weapon system on H145M: Here

Serbia has been revealed as the launch customer for the Airbus Helicopters HForce modular weapons system, with which it will equip four of its incoming fleet of H145Ms.

In late 2016 Belgrade ordered a total of nine of the German-built medium-twins, for use by its air force and police, with deliveries running from 2018-2019.

However, there had been no previous indication that it was also seeking the weapon system.

Donauwörth  – Airbus Helicopters has recently completed a ballistic development test of an HForce weapon system on a H145M on Pápa Airbase in Hungary. The tested system included guns (FN Herstal HMP400), unguided rockets (Thales FZ231) and cannons (Nexter NC621) as well as an electro-optical targeting system by Wescam (MX15) and a helmet mounted sight display by Thales (Scorpion). All planned and required tests were performed in a tight and demanding time schedule.

Thales will also be responsible for the development and production of the specific configuration for the Spanish Air Force EF-18. The system is already operational in multiple platforms in the United States

Scorpion® is a ‘force multiplier’ system offering full colour symbology (navigation, intelligence, combat, etc.) for both nighttime and daytime missions, in addition to target cueing in potentially degraded visual environments, therefore easily allowing target designation and allocation of points of interest with the aircraft’s sensors. Scorpion® is fully interchangeable between helmets/pilots as it is installed directly over standard helmets, allowing the total amount of equipment necessary for the fleet to be reduced, thus favouring maintenance and reducing life-cycle costs.

Thales will be responsible for the viability study, testing phase, integration with test aircraft, qualification support and integration in the fleet. Thales will also be responsible for the development and production of the specific Scorpion® configuration for the Spanish EF-18 including ejection safety analysis. The qualification phase includes inter-operability with the IRIS-T missile and the daytime/ nighttime-imaging pod for cueing lightening targets.

The system is already operational on multiple platforms in the United States such as the F16 Block 30/32 and the A10 ‘Thunderbolt II’ and has been flight tested on the F-22, the NH-90 and many other platforms. At present, the system is being actively evaluated by other clients globally. Source thalesgroup.com

Survivability of the battlefield support helicopter 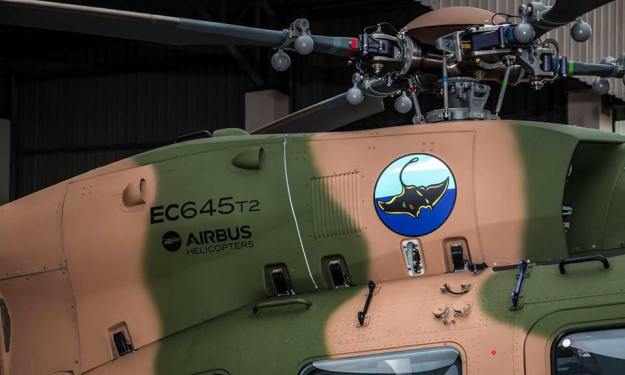 One of the youngest Arriel family members, the 2E was certified in December 2012 and entered service in August 2014 with the delivery of the first Airbus Helicopters H145. The Arriel 2E offers 20% more power than the 1E2 installed on the EC145. It is capable of a take-off power of 894 shp, a cruising power of 828 shp and a maximum power, via the One Engine Inoperative (OEI) rating, of 1072 shp. Similarly to other Arriel 2+ variants, the 2E features a combination of new and proven technologies. Notably, it features a new axial compressor, a new HP compressor diffuser, new HP turbine blade material and a new-generation, dual-channel Full Authority Digital Engine Control (FADEC) linked to a modernized fuel system. Source safran-helicopter-engines.com

The helicopter has a fast cruise speed of 244km/h, maximum speed of 250km/h and maximum range of 662km. Its outstanding hover performance allows for operations at altitudes of 2,700m (8,858ft).