The Talon HATE programme covers the development of an infrared search and track sensor (IRST) and data-links equipped communications pod, which will improve communication and information sharing among various platforms.

The Talon HATE (and by the way, nobody seems to know what that stands for) system includes air-to-air, air-to-ground and satellite data links. Not only will this large pod work as an essential communications bridge and data-fusion center, but it also provides America’s F-15C/D Eagle fleet with a serious sensor enhancement via the installation of an Infrared Search and Track system (IRST) at the 17 foot-long, 1,800 pound pod’s forward tip.

Talon HATE will work in a very similar way as the Air Force’s Battlefield Airborne Communications Node (BACN), which is currently deployed on Air Force E-11 and EQ-4 as well as NASA WB-57 aircraft today, but in a tactical instead of strategic one.

Boeing describes the Talon HATE system as such:

The system assimilates information in real-time from multiple domains. The data will then be transmitted over a common data-link for use by joint aircraft, ships and ground stations, improving communication and information sharing across the battlefield.

The single operational picture formed by Talon HATE is claimed to provide soldiers with a capability to more efficiently engage and defend against ‘next-generation’ threats.

Basically it’s a fighter-mounted universal translator, data-fusion center, and router that takes various data-links’ waveforms and “languages,” and fuses their information into a single common picture. It then rebroadcasts that common picture multiple waveforms and “languages” so that everyone in the battlespace is on the same page and can exploit a much more detailed rendering of where the enemy is and where the good guys are. 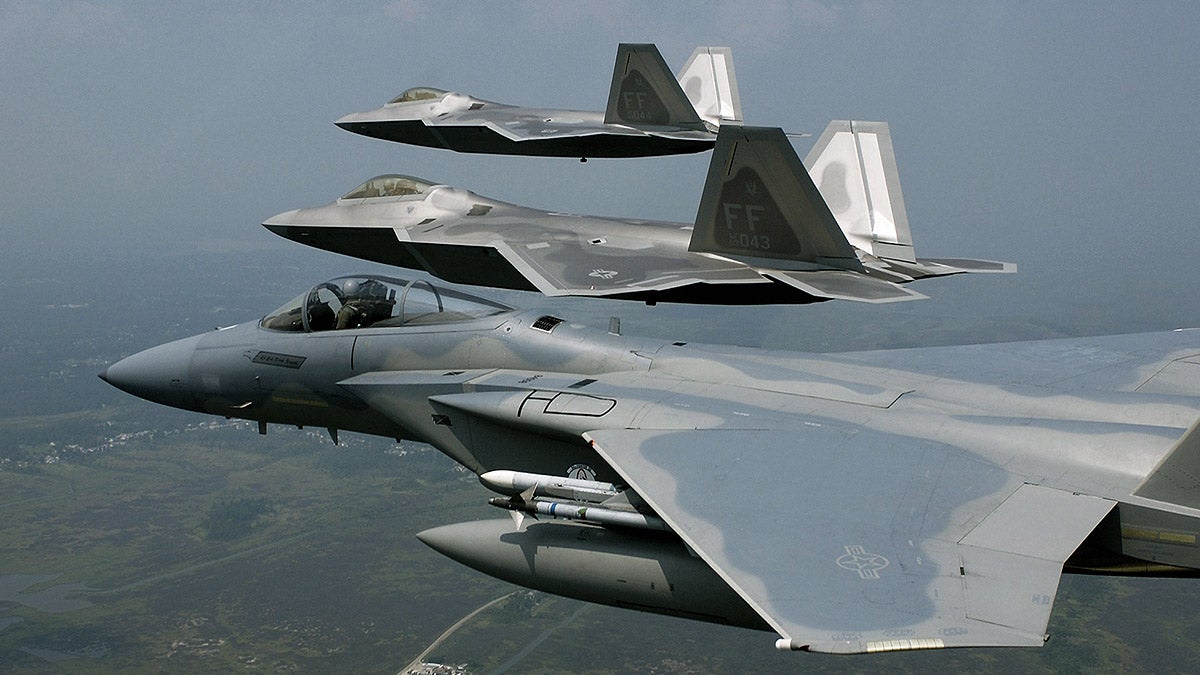 This will allow American F-15C/D and other so-called “legacy” fighters, allied aircraft, ships, and ground and command-and-control assets that use MIDS/JTIDS Link 16 data links common to NATO countries to see what the F-22 sees. It does this by receiving and translating the F-22’s proprietary and stealthy Intra-flight data link (FIDL) transmissions into data the MIDS/Link 16 data link terminals can display.

This is a very big deal as F-22s are some of the most capable sensor platforms in the world. Their ALR-94 electronic surveillance measures (ESM) and radar warning receiver suite can sniff out the locations of enemy radars and communications, and classify them accordingly. The aircraft’s APG-77 AESA radar is also highly capable, especially considering it will likely be operating forward of other non-stealthy enemy forces, peering deep into enemy territory.

The F-22 does not have Link 16 transmission capability like most other combat aircraft because that system was not designed for stealthy aircraft and its omni-direction emissions could give away the F-22’s presence. As such, the F-22 can currently receive information via Link 16 compatible broadcasts, but it cannot send them. In other words, an F-22 can see what an F-15C sees sensor-wise, but not the other way around.

The Talon HATE pod will basically masquerade as another F-22, with Raptors beaming back information to it for processing and redistribution on MIDS/Link 16 waveforms. This will allow F-15C/Ds to see the F-22’s tactical picture, and other aircraft will be able to as well.

In addition to being a flying data-fusion center and super wireless hot-spot, Talon HATE also features the aforementioned IRST mounted on the tip of its pod. Currently, the Air Force lacks any IRST capability, including the F-22. So this secondary capability gives the F-15C/D Eagle a much needed set of passive detection eyes.

IRST mounted on the tip of its pod

Talon HATE’s IRST data will also be integrated into the common picture, so that F-22s can make use of it. This will allow the stealth and fast jets to super-cruise out to a target and engage it without ever turning on their own radars, and thus not emitting any electromagnetic energy that the enemy could spot. Additionally, the pod’s IRST can be equally effective when F-22s are not present, giving the F-15C/D fleet a much needed way for detecting stealthy aircraft and cruise missiles or taking on targets without turning on their powerful radars.

Most importantly, this system will greatly enhance the Eagle-Raptor air dominance team. With only about 125 combat coded F-22s in service, the Air Force will partially rely on the F-15C/D when it comes to air superiority for decades to come. By sharing a common picture, tactics can be better tailored to take advantage of each aircraft’s strengths and weaknesses.

For instance, the F-15C/D’s new APG-63V3 Active Electronically Scanned Array radar is the most powerful in the world. Being able to search for enemy aircraft deep in enemy airspace, the F-15C/D can data-link its radar picture to the F-22, which can operate far ahead of the Eagle safely. By relying primarily of the F-15C/D’s radar picture, the F-22 can use its radar as little as possible, which will lessen its chances of detection.

Such tactics will allow the F-22 to streak out ahead of the F-15s and club the enemy without them ever knowing they are there, all they would see are F-15C/Ds, with their radars blazing, many miles behind where the Raptors are silently operating. Additionally, once the F-22’s missile stocks run dry, they can switch to a scouting role, calling the shots for F-15s that are heavily laden with air-to-air missiles and operating safely behind the F-22’s stealthy screen. Boeing is well aware of this potential dichotomy and they are offering upgrades that could see F-15s carrying double the missile load they can today.

What this all amounts to is a maximization of each aircraft’s abilities against an enemy threat. By sharing a common situational picture and targeting data, the F-15C/D and F-22 team become much more potent and synergistic, and other aircraft, ships, and ground assets can benefit from this relationship as well. Without Talon HATE’s data fusion capabilities, this cannot be achieved.

Even without the F-22’s presence, the pod’s ability to provide IRST capability and an indigenous active battlefield network capability to the F-15C/D fleet that reaches from the ground up into space is a capability worth pursuing on its own. This is especially true as current BACN equipped aircraft are highly tasked and not meant to be present on the leading edge of the battlefield. This is an especially large problem for anti-access environments, where lumbering support aircraft, like those carrying a BACN system, could be pushed back hundreds of miles from the front lines. And it is in these exact scenarios where having connectivity between F-22s and legacy fighters will be so essential.

Talon HATE represents another step in the Pentagon’s attempt to deal with integrating 5th generation stealth fighters with a fleet of older aircraft that will be around for decades to come. This problem will only be exacerbated by the F-35’s introduction into service.

Currently there is an initiative underway to try and figure out how its unique and stealthy data link can be rebroadcasted to other less advanced assets. But for now, the most pressing need is to get the F-22 and the Air Force’s teen-series fighters, especially the F-15C/D fleet, on the same tactical page, and the Talon HATE pod hopes to do just that.