The Mi-8AMTSh is a dedicated armored assault version of the Mi-8AMT helicopter. Sometimes it is nicknamed the Terminator. Its armament is derived from Mi-24 gunship and carries some armor. It made its first flight in 1996. It was first publicly demonstrated in 1999. First helicopters were delivered to Russian Air Force in 2009. Estimated Russian military requirement is for about 200 new assault transport helicopters.

Main role of this helicopter is to carry cargo and troops and support them with its firepower. It can also perform evacuation and combat search and rescue. It can soften-up enemy defenses before landing. This helicopter can engage enemy infantry, armored vehicles and even main battle tanks. Also it has secondary air-to-air capability against low-flying aircraft, helicopters, and UAVs.

This helicopter can carry 4 000 kg of payload in its cargo compartment. Alternatively it can carry loads up to 4 000 kg externally.

The Mi-8AMTSh can carry 36 troops. There are two trainable 7.62-mm machine guns hidden behind doors and operated by the passengers. Cargo area can be easily transformed for medical evacuation role. In this role helicopter can carry 12 stretchers and one medical attendant.

Two stub-wings have a total of 12 hardpoints for various types of weapons. It can carry various types of guided missiles, unguided rockets podded cannons and machine guns. This helicopter can carry Shturm-V (AT-6) or Ataka-V (AT-9) anti-tank missiles. Also it can carry Igla-V (SA-18) air-to-air missiles.

The Gondala Universalnaya Vertolotnaya 8700 (GUV-8700) and ‘a gun-pod developed in the seventies by  Spetztekhnika Vympel NPO for use aboard Hind helicopters (Mi-24/35), Hip (Mi-8/17) and Hormone (Ka-25).The GUV-8700 looks like a big cigar-box, about three meters long, the all-metal construction and the ends’ rounded.  (Translated by Google) 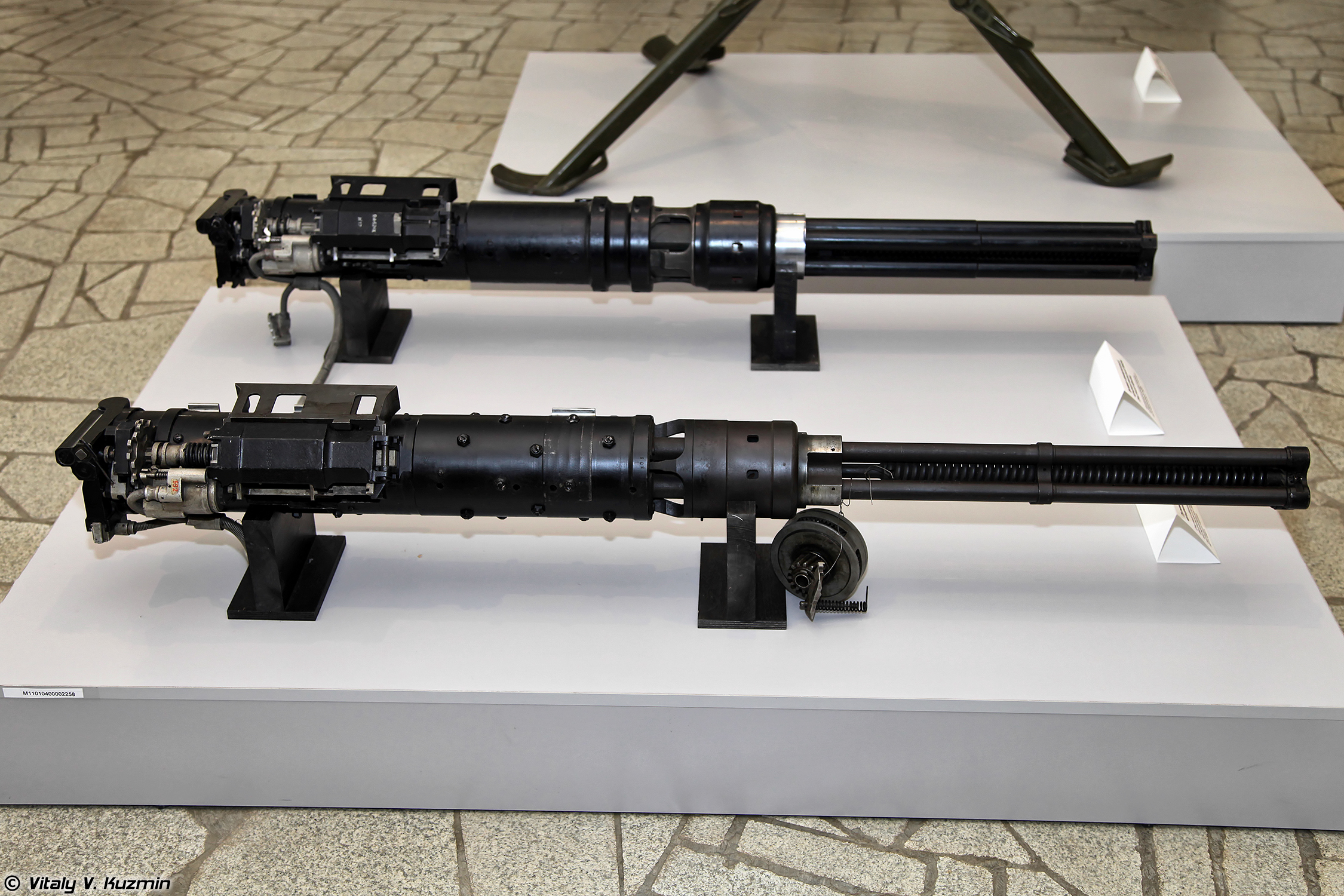 GShG four rods 7.62 Both are rotating barrels Gatling type Soviet that, working either gas, require no external power supply. The firing rate overall (theoretical) of three machine guns may ‘vary, therefore, from 14 to 17,000 c / min, but in practice is limited to 12,000 for issues related to the consumption of ammunition.  (Translated by Google)

The S-5 (first designated ARS-57) is a rocket weapon developed by the Soviet Air Force and used by military aircraft against ground area targets. It is in service with the Russian Air Force and various export customers. It is produced in a variety of subtypes with different warheads, including HEAT anti-armour (S-5K), high-explosive fragmentation (S-5M/MO), smoke, and incendiary rounds. Each rocket is about 1.4 meters (4 ft 6 in) long and weighs about 5 kg (11 lb), depending on warhead and fuze. Range is 3 to 4 kilometres (1.9 to 2.6 miles).

9K114 Shturm (Russian: 9К114 «Штурм»- “shturm” means storm (assault) in English) is a SACLOS radio guided anti-tank missile system of the Soviet Union. Its GRAU designation is 9K114. Its NATO reporting name is AT-6 Spiral. The missile itself is known as the (Cocoon). The missile is transported and launched from a glass-reinforced plastic tube. The missile uses a Soyuz NPO solid-rocket sustainer, with a small booster stage to launch the missile from its tube. The missile is SACLOS with a radio command link. The use of a radio link allows the missile to travel much faster and further than if it were wire guided. The radio link is a VHF system with five frequency bands and two codes to minimize the risk of jamming. The system comprises a KPS-53AV 8x daylight-only direct vision sight with an integrated laser rangefinder. After the missile is launched, the gunner has to keep the sight’s crosshairs on the target until impact. Appropriate steering commands are transmitted to the missile via the radio link.

The 9M120 Ataka (Russian: Атака; Attack) is an anti-tank guided missile (ATGM) originating from the Soviet Union. TheNATO reporting name of the 9M120 missile is the AT-9 Spiral-2. It is the next major generation in the 9K114 Shturm (AT-6 Spiral) family. The missile has radio command guidance and is also a Beam riding SACLOS. This missile’s primary variant was designed to defeat tanks with composite armour and explosive reactive armor. The 9M120 Ataka system is often confused with the 9K121 Vikhr system, despite being different weapons systems developed by different companies. The AT-9 is more resistant to electronic countermeasures, and has a greater hit accuracy and longer reach. The newly developed warhead allows for increased penetration power and effectiveness against explosive reactive armor. The Ataka missile is stored in a glass reinforced plastic tube, which also acts as its launcher. The missile is reported to be considerably faster than the AT-6 Spiral, with longer range than the original version. It still uses radio command guidance, but the system has been improved when compared to the earlier 9K114 Shturm.

The 9K38 Igla (Russian: Игла́, “needle”) is a Russian/Soviet man-portable infrared homing surface-to-air missile (SAM). “9K38” is the Russian GRAU designation of the system. Its US DoD designation is SA-18 and its NATO reporting name isGrouse; a simplified, earlier version is known as the 9K310 Igla-1, or SA-16 Gimlet. The latest variant is the 9K338 Igla-SNATO reporting name SA-24 Grinch. It has been fielded by the Russian Army since 2004. The seeker has two detectors – a cooled MWIR InSb detector for detection of the target and uncooled PbS SWIR detector for detection of IR decoys (flares). The built-in logic determines whether the detected object is a target or a decoy. The latest version (Igla-S) is reported to have additional detectors around the main seeker to provide further resistance against pulsed IRCM devices commonly used on helicopters.

This helicopter has a crew of three. One of them is a gunner and aims various weapons. A sighting system is located under the nose.

This assault transport helicopter is fitted with updated and more powerful engines. It also has new structurally improved rotor blades.

Comparing with the earlier Mi-8 series helicopters the Mi-8AMTSh has improved avionics and modernized electronic core. It can operate at night and in all weather conditions. It is equipped with GPS and Russian GLONASS satellite navigation systems. It is also fitted with weather radar.

Mi-171Sh Terminator is an export model. It is in service with Bangladesh, Ghana and Nigerian. This helicopter has been ordered by Croatia, Czech Republic, Kenya, Peru and possibly some other countries. It is worth noting that the Mi-8 series helicopters are popular due to their good value for money. Countries with limited military funding use such machines instead of dedicated attack helicopters. Also the Mi-8/Mi-17 helicopters are easy to maintain.