BrahMos-II  is a hypersonic cruise missile

BrahMos-II or BrahMos-2 or BrahMos Mark II (note: not to be confused with BrahMos block-2) is a hypersonic cruise missile.Currently BrahMos Mark II under joint development by India’s Defense Research and Development Organization (DRDO) and Russia’s NPO Mashinostroeyenia, which have together formed BrahMos Aerospace Private Limited. It is the second of the BrahMos series of cruise missiles. The BrahMos-II is expected to have a range of 290 kilometers (180 mi) and a speed of Mach 7. During the cruise stage of flight the missile will be propelled by a scramjet air breathing jet engine. (An airbreathing jet engine (or ducted jet engine) is a jet engine propelled by a jet of hot exhaust gases formed from air that is drawn into the engine via an inlet duct. All practical air breathing jet engines are internal combustion engines that directly heat the air by burning fuel, with the resultant hot gases used for propulsion via a propulsive nozzle, although other techniques for heating the air have been experimented with. Most jet engines are turbofans which have largely replaced turbojets.

Other details, including production cost and physical dimensions of the missile, are yet to be published. It is expected to be ready for testing by 2017.The planned operational range of the BrahMos-II has been restricted to 290 kilometres (180 mi) as Russia is a signatory to the Missile Technology Control Regime (MTCR), which prohibits it from helping other countries develop missiles with ranges above 300 kilometers (190 mi). Its top speed will be double that of the current BrahMos-I and it has been described as the fastest cruise missile in the world. Russia is developing a special and secret fuel formula to enable the BrahMos-II to exceed Mach 5. Design of multiple variants of the missile was completed by October 2011, with testing starting in 2012.These variants will arm the Project 15B destroyers of the Indian Navy. Fourth-generation multi-purpose Russian Naval destroyers (Project 21956) are also likely to be equipped with the BrahMos II.

India and Russia are also collaborating on a hypersonic version of the missile. Reports suggest that the Brahmos-II will be powered by a scramjet engine rather than the ramjet version. Russian defense officials have also claimed that the missile will reach the Mach 5 threshold required to be classified as hypersonic by using a special new fuel.7  Source missilethreat.csis.org

It’s widely believed BrahMos-II is the export version of Russia’s 3M22 Zircon hypersonic cruise missile, and both weapons look very similar in external appearance. Production of the 3M22 Zircon is expected to begin late this year at the earliest. Tests of this weapon began in March 2016.

Last week, Russia claimed the 3M22 Zircon, which is being developed as an anti-ship missile, hit Mach 8 (9,900 km/h) in a recent test, which makes this weapon the fastest hypersonic missile on Earth — if the unverified results of this test are true.

“During the tests of the missile, it was confirmed that its speed on the march reaches eight Mach,” said Russian state-owned media. Russia didn’t specify which submarine, surface ship or land installation launched the Mach 8 Zircon, nor did it specify when.

In 2014, Russian defense companies increased their sales by nearly 50 percent, accounting for 10.2 percent of the entire global market.

The Russian defense industry grew significantly in 2014, analysts at the Stockholm International Peace Research Institute said in an annual report as quoted by Handelsblatt.

The report is expected to be officially released on Monday.

SIPRI experts made up a ranking of the 100 arms producing companies for 2014. The list included 11 Russian companies, against just eight a year ago.

In 2014, the sales of the Russian defense industry increased by 48.4 percent, to 10.2 percent of the global market.

Russian companies have been at the forefront of the exports increase and rise in the national defense spending, SIPRI analyst Simon Wezeman commented.

In total, according to the analysts, in 2014 the contracts of the top-100 world defense companies dropped by 1.5 percent, to $401 billion. US, Canadian and European companies decreased their revenues from arms sales while there was an increase in other countries.

Chinese companies were not included in the ranking due the absence of information, SIPRI underscored.

The trend in international transfers of major weapons, 1950-2014. 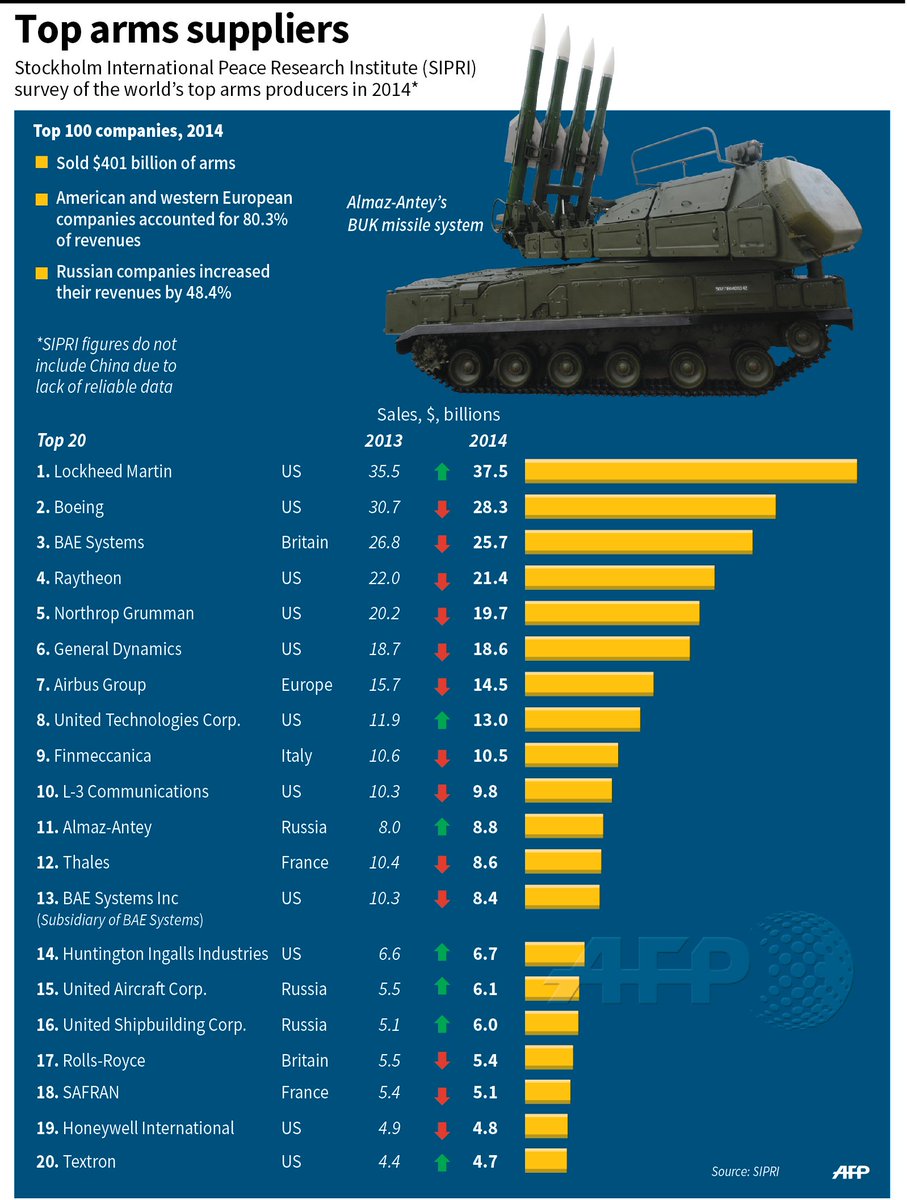 The Pacific Fleet’s naval aviation will receive the first An-140-100 transport this December. The second airplane will be delivered in the first six months of 2016.

The Pacific Fleet’s naval aviation has already received 4 modernized and overhauled Il-38N aircraft this year. Having received these airplanes, the pilots were able to increase the overall flight-hour of the Fleet’s ASW aviation.

The Il-38N is capable of detecting aerial targets on a distance of up to 90 km and following the surface object within a radius of 320 km.

Crew positions are equipped with the latest hardware.

Owing to its characteristics and installed facilities, the Il-38N airplane may conduct longstanding patrol in the assigned area, search for targets and share the information on them with other airplanes and ships. In addition, this airplane is capable of attacking the enemy independently as it may carry up to 9 tons of armament, varying from torpedoes to orientated naval air bombs.

According to the specialists, after the modernization the airplane’s searching productivity has increased by four times in comparison with the basic model.

The reception of new air materiel has proved to be another stage in the re-equipment and modernization of ASW and transport aviation of the Pacific Fleet.

The Ilyushin Il-38N is an upgraded, more capable version of the Russian Navy’s Il-38 anti-submarine warfare aircraft. The new version is also capable of carrying out electronic intelligence (ELINT) missions. Besides, these aircraft can be used for mapping the magnetic and gravitational fields of the Northern Ice sea, and also for conducting scientific oceanographic research and underwater and air reconnaissance. The Il-38N is fitted with the Novella sensor package which dramatically expands the combat capabilities of the aircraft against underwater, surface and airborne targets. The new sensor includes radar, high resolution thermal imaging system, a magnetic anomaly detection system, an electro-optical detection system (including laser, TV and thermal channels), gravitational anomaly detector and other equipment. The radar has a maximum detection range of 320 kilometers. According to the Russian Navy’s public statements the majority of surviving Il-38 aircraft will be upgraded to the Il-38N configuration. The first Il-38N aircraft was introduced into service by the Russian Navy’s Northern Fleet in early March 2012. deagel.com

Building an aircraft carrier is just like playing with Lego bricks! At a much, much larger scale, of course. Here is footage showing how the final section of the Queen Elizabeth-class aircraft carrier the HMS Prince of Wales was slapped on top of the ship. The piece, known as Aft Island, weighs 750 tonnes and will control aircraft operations on the carrier.