Taipei, Dec. 9 (CNA) China’s purchase of 24 Su-35s is aimed at securing air supremacy in the region and countering the F-22 fighters deployed by the United States in Okinawa, according to a Taiwanese expert on Russian weapons.

Although China has yet to officially confirm the US$2 billion deal, Russia’s TASS news agency has reported that Moscow has completed a deal to sell Beijing 24 Su-35 fighters over three years beginning in 2016. The deal also includes backup engines and ground facilities.

China has been locked with its neighbors over sovereignty disputes in nearby seas, and has taken steps, including building artificial islands in the South China Sea, to assert its claims while trying to deter American involvement in the region.

Yang Cheng-wei (楊政衛), a Taiwanese expert on Russian weapons systems who uses the pen name “Yangkovsky,” told CNA in a recent interview that amid the territorial disputes over East China Sea and South China Sea islets, China is seeking the Su-35’s advanced capabilities to reinforce control.

“Although China has more advanced jet fighters such as J-11Bs and J-10A/B, these 4th-generation combat jets can at best compete with F-15s and F-16s deployed by neighboring countries,” according to Yang.

“Considering the potential customers for the F-35 in the region and the U.S.’s deployment of F-22s in Japan, China has seen the need to respond to the situation and gain an edge,” said Yang, who studied physics at St. Petersburg State University.

Compared with the Russian-made Su-27 and American F-16 fighter planes, the Russian air superiority fighter is viewed as the most advanced 5th-generation stealth combat jet due to its enhanced avionics and longer range, Yang said.

“The Su-35 is a 5th generation jet without the appearance of a stealth fighter,” Yang said, though others, including Russian media, have described it as a very nearly 5th-generation (4++) fighter jet.

Yang said the Su-35’s avionics is equipped with independent thermal imaging capabilities that can detect the infrared signal from the back of a missile in flight.

“In addition, the Su-35’s high-thrust engines, automatic flight control system and integrated sensors are as good as on any 5th generation fighter,” Yang said.

The aircraft’s Irbis-E passive electronically scanned array radar system is designed to detect jet fighters at ranges of 400 kilometers and to track stealth objects within 90 kilometers, which even exceeds the capability of Russia’s most advanced T-50 stealth fighters, Yang said.

The fighter also carries a big payload. “The Su-35 can carry up to 14 weapons, include long-range missiles. It can be seen as the ultimate upgrade of the Su-27 family,” he said.

With these advantages, the Su-35 enjoys an edge over other types of jet fighters except for F-22s, Yang said, though noting that it can even strike back against a stealth F-22 thanks to its own strong defensive capabilities.

“The deployment of 24 Su-35 fighters in coastal Zhejiang Province will balance the threat from the F-22s deployed at Okinawa’s Kadena Air Force Base,” he said.

Two to four Su-35s would be enough to detect F-22s 100 kilometers away, and if the control capabilities of the Su-35 are used to command the existing fleets of Su-30s and Su-27s, it will have a multiplying effect on the strength of China’s air power, Yang said.

In terms of the acquisition’s impact on Taiwan’s security, Yang cautioned that even if Taiwan acquires F-35s, their stealth advantage would be considerably eroded by the Su-35 and they would have a tough time gaining air superiority.

Due to the potential threat posed by a new Su-35 fleet, Taiwan must carefully consider how to preserve its combat capabilities if attacked by China rather than focusing solely on procuring stealth fighters to counter enemy aircraft, he argued. 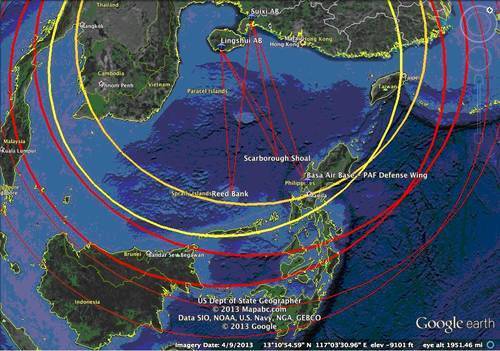 WASHINGTON (Sputnik) — On October 20, for the first time, a SM-3 was test-fired to intercept and destroy a ballistic missile in a test in the European theater.

“Work will be performed in Tucson, Arizona, with an expected completion date of March 2020,” the announcement stated on Tuesday.

The Department of Defense has been deploying US Navy DDG51 Arleigh-Burke-class destroyers armed with SM-3 interceptors around Europe, which Russia has criticized as upsetting the strategic balance in the region.