The Shenyang J-31 (F-60) is a fifth-generation, multi-role, twin-engine stealth fighter aircraft being manufactured for the People’s Liberation Army Air Force (PLAAF) by Shenyang Aircraft Corporation, an affiliate of Aviation Industry Corporation of China (AVIC). It is the second stealth fighter that China has indigenously developed after the J-20.

The J-31 fighter jet is intended to provide advanced defence capabilities in close-air support, aerial bombing and air interdiction operations. It can also perform suppression of enemy air defences and can be used as a carrier-based fighter on aircraft carriers. Initial operational capability of the aircraft is expected in 2020. 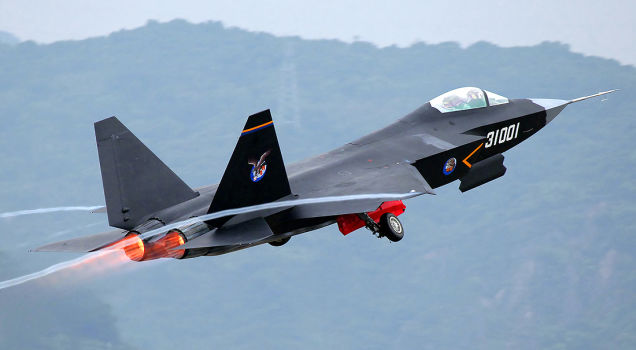 Known as the FC-31 fourth-generation multi-purpose medium fighter, the export variant of the J-31 fighter was also displayed at the Zhuhai Air Show 2014. The FC-31’s airframe and control surfaces are similar to those of J-31 but will be outfitted with angled vertical stabilisers, two large internal payload bays and an estimated payload capacity of 2,268kg. It can also be attached with electro-optical and sensor system (EOSS) pod and infrared search-and-track sensors below the nose.

The chined fuselage of the J-31 incorporates a pair of tailplanes. The rear edge of the fuselage is hinged with two vertical stabilisers. A rudder is installed on each stabiliser to control the aircraft’s movement. The aircraft is fitted with a tricycle landing gear. The nose landing gear consists of double wheels, while the main landing gear has a ‘dogleg’ structure.

The fighter jet has a length of 16.9m, height of about 4.8m, and a wing span of 11.5m. The empty weight is about 17t and the maximum take-off weight is 25t. The aircraft can carry out missions at medium and low-altitudes.

Airshow in China held in Zhuhai from 1-6 November 2016

Still imagery shows the aircraft taking off. One major difference is the configuration of the aircraft’s twin canted tail. Produced by Shenyang Aircraft Corporation, the FC-31 features a cropped tail, whereas the first prototype designated J-31, had a nearly triangular tails with a horizontal top.

Following the first flight of a second Shenyang FC-31 prototype, on December 23 last year, there are now discussions within the Chinese media that the improved aircraft might be slated for operations on the new Chinese carrier fleet. The aircraft has been named the “Gryfalcon.”

The aircraft is operated by a single pilot. The cockpit is enclosed by a transparent, two-piece canopy to provide increased visibility for the pilot.

The aircraft can be equipped with state-of-the-art avionics, including multifunctional displays, helmet-mounted sight, an electro-optical targeting system (EOTS), an attitude director indicator (ADI), and advanced sensors and communication systems.

A privately-owned Chinese sensor company has unveiled a suite of air-to-air and air-to-ground sensors in development for the latest Chinese and Russian fighters.

Marketing brochures on A-Star’s booth suggest that the J-20 could use the passive sensors to detect and aim missiles against the Northrop Grumman B-2 bomber and Lockheed Martin F-22 fighter, even while its radar is being being jammed by a Boeing EA-18G Growler. It lists detection ranges for the B-2 at 150km and for the F-22 at up to 110km.

Both systems have completed ground testing in a laboratory, and are now ready to enter flight testing, he says. Chinese combat aircraft manufacturer AVIC is considering integrating the sensors on a testbed aircraft, then could decide to test them on the J-20 and J-31, he says. Operational status is at least a year away for both sensors and possibly longer, Yanyong adds.

A-Star exhibited the systems at MAKS in hopes of attracting buyers from Russian and Commonwealth of Independent States countries, he says. Source flightglobal.com

A-Star’s EOTS-86 appears to be similar to the Electro-Optical Targeting System (EOTS) that equips the Lockheed Martin F-35. Source: Via Top81 web page

A-Star’s EORD-31 appears to be a conventional infrared search and tracking (IRST) system but with a faceted sensor dome; and the claimed ability to detect a F-22 – Source: (Via Top81 web page)

The PL-10 SRAAM is produced by the Luoyang-based China Air-to-Air Guided Missile Research Institute (formerly the Luoyang Electro-Optics Technology Development Centre), a subsidiary of the Aviation Industry Corporation of China (AVIC) consortium, and the designer and manufacturer of all infrared (IR) homing variants in China’s PL (Pi Li/Thunderbolt) series AAMs.

Internal weapons bay can accommodate up to two missiles each bay – mil.huanqiu.com

FC-31 features a single internal weapon bay inside its belly housing up to 6 AAMs including PL-10, PL-12 and PL-21. The aircraft is also thought to have a secondary surface attack capability where it can carry 50kg class SDBs internally such as LS-6/FT-7 satellite guided bomb and GB50 LGB, or the larger YJ-83K AshM and YJ-91 ARM externally under 6 hardpoints. An internal gun is thought to be installed as well but its exact location is still unknown. Source fullafterburner.weebly.com

The PL-12 is claimed to have an operational ceiling of at least 21 km, with a maximum effective range of 100 km and a minimum engagement range of 1,000 m. The missile has a 38+ g manoeuvering limit and, according to CATIC, it has been tested for a 100-hour captive ‘live flight’ life. According to Chinese claims, PL-12 is more capable than the American AIM-120 A/B, but slightly inferior than the AIM-120C. Source airforceworld.com

PL-12 (K/AKK-12?) was under development at LETRI/607 Institute since early 90s. The missile was expected to be in the same class as AIM-120A/B and its active seeker may have evolved from the earlier AMR-1 design (R-129? based on Russian 9B-1348 seeker & datalink for R-77). Its tailfins appear to have fin tips as well as the leading edges of the fin root cropped. These specially designed tailfins are believed to possess lower drag for greater speed and higher torque for better maneuverability. Two datalink antennas can be seen next to the nozzle for mid-course correction. Several dielectric strips are seen along the middle warhead section which house the radio proximity fuse. PL-12 completed its development test in December 2004 and was certified in 2005. Its export version is called SD-10 (SD-10A as the improved version) and was first revealed to the public during the 2002 Zhuhai Airshow. Currently it is in the service with J-8F, J-10, J-11B, J-15 and Su-30MK2. In addition SD-10A is being carried by JF-17 currently in service with PAF. Some specifications of SD-10: length 3,850mm, diameter 203mm, wing span 674mm, weight 180kg, max g-load 38g, max speed 4M, range 60-70km. Recently produced PL-12 is expected to feature an improved seeker with new digital processor and SINS. The improved PL-12 (PL-12A?) is thought to be comparable to American AIM-120C4. It was reported in November 2010 that PL-12 may feature an active/passive dual mode seeker in order to achieve greater ECCM capability and kill probability. Source chinese-military-aviation.blogspot.com

A new long-range active radar homing AAM has been under development which appears similar to British Meteor. It features an active radar seeker and an integrated ramjet/solid rocket motor with a single or twin belly air inlets. PL-21 also features 4 small stabilizing fins behind the active radar seeker, a characteristics of Russian R-27/AA-10. Two-way datalink antennas may be installed in the tail section for mid-course correction. The effective range of PL-21 is expected to be >150km. The missile could be carried by J-11D for long-range interception. It wasrumored that the first ground launch test took place in March 2010. PL-21 is expected to be carried by the new generation of stealth fighters including J-20 and FC-31. The latest rumor (March 2016) suggested that a PL-21 was test fired from a J-16. Source chinese-military-aviation.blogspot.com

According to Chinese media mil.huanqiu.com’s report, the website of U.S. media Popular Science monthly said in its report that the PL-15 beyond visual range air-to-air missile has a range of 150 to 200 km further than any U.S. air-to-air missiles in service.

In addition, it has a longer active radar monitoring and anti-jamming data chain. Gen. Carlisle said that with an additional ramjet engine, the missile had a longer range to threaten not only US F-22 and F-35 stealth fighter jets but also U.S. bombers and aerial refueling aircrafts.

The report continued that General Herbert Carlisle, the head of the U.S. Air Force’s Air Combat Command, asked the rhetorical question in a speech at the Center for Strategic and International Studies in Washington, D.C., “How do we counter that and what are we going to do to continue to meet that threat?”

The report says that US media claims that the new missile has the US Air Force spooked. Source chinadailymail.com

YJ-83KH – modification missiles YJ-83K with passive IR guidance system in the terminal phase of flight. This model can also be used under conditions of strong electronic interference. In contrast, the guidance system can confuse the help of IR decoy targets and smoke screens. Export versions of missiles YJ-83KH bears CM-802AKG and reportedly has a weight of 285 kg and a range of 230 km.

Guidance system :   inertial system (autopilot) (guidance in the initial and middle stages of flight) + active radar homing head (guidance on the reflection of electromagnetic radiation homing head of goals) unknown type (guidance in the terminal phase of flight); A detachment of weapons from the carrier occurs at altitudes from 500 to 1 200 m. While in mid-flight missiles YJ-83K moves at a height of 20-30 meters, altitude of weapons in the terminal phase of flight is only 5-7 meters above the surface sea.

Two Kh-31P ARMs were on display at a PLAAF airbase as part of the Su-30MKK’s weapon package. Up to 6 Kh-31Ps can be carried by an Su-30MKK as a Wild Weasel aircraft. It can also be carried by the naval Su-30MK2. This supersonic missile is distinguished by 4 ramjet engines attached to its body which give the missile a range of 70km and a speed of Mach 3. It features an L112E passive seeker (with three interchangeable modules to cover different frequency bands) and its weight is 600kg with a 87kg warhead. The domestic version of Kh-31P has been produced locally under a license as YJ-91 (KR-1/H/AKJ91?), which can be carried by JH-7A, J-8G even the new FC-31 and is compatible with the Chinese fire-control system. In addition, the anti-ship version (Kh-31A) was also acquired and is being carried by the naval Su-30MK2 while its domestic counterpart (YJ-91A?) could be carried by the naval JH-7A, J-10B as well as the J-15 onboard aircraft carrier Liaoning. The introduction of Kh-31/YJ-91 ARM has enabled PLAAF to fly SEAD missions against enemy long-range SAM defences. The anti-ship YJ-91A is expected to be surpassed by the bigger and heavier YJ-12. Source chinese-military-aviation.blogspot.com

The Kh-31P high-speed medium-range “air-to-surface” guided missile with changeable passive radar homing heads is designed to engage radars operating within long- and medium-range air defence missile systems, as well as other ground- and sea-based radars of different purpose, in the corresponding frequency band.

The Kh-31P missile can be efficiently launched either independently or in salvo, in fair and adverse weather conditions, to engage radar targets of opportunity or previously disclosed ones.

The missile can be equipped with changeable homing heads operating in coresponding frequency bands used by modern continuous-wave and pulsed radars of surface-to-air missile and anti-aircraft artillery systems.

– target search and lock-on in the autonomous mode, or by receiving target designation data from carrier’s sensors with the missile on the aircraft suspension station;

It has a high explosive/fragmentation type of warhead.

*Note techincal data is of Kh-31P 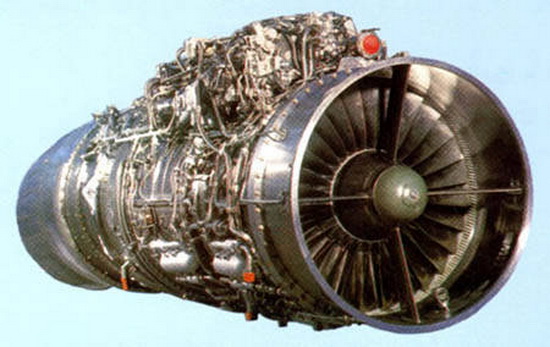 It is intended for replacement in at JF-17 fighter aircraft Russian RD-93 engine production inChina and J-31.