The JF-17 can deploy diverse ordnance, including air-to-air and air-to-surface missiles, and a 23 mm GSh-23-2 twin-barrel autocannon. Powered by a Guizhou WS-13 or RD-93 afterburning turbofan it has a top speed of Mach 1.6. The JF-17 is to become the backbone of the Pakistan Air Force (PAF), complementing the General Dynamics F-16 Fighting Falcon whose performance it roughly matches, at half the cost. The PAF inducted its first JF-17 squadron in February 2010 and five years later 54 units were in service, and 96 units were on order, to be delivered by the end of 2018.

The airframe is of semi-monocoque structure constructed primarily of aluminium alloys. High strength steel and titanium alloys are partially adopted in some critical areas. The airframe is designed for a service life of 4,000 flight hours or 25 years, the first overhaul being due at 1,200 flight hours.  Block 2 JF-17s incorporate greater use of composite materials in the airframe to reduce weight.

The mid-mounted wings are of cropped-delta configuration. Near the wing root are the LERX, which generate a vortex that provides extra lift to the wing at high angles of attack encountered during combat manoeuvres. A conventional tri-plane empennage arrangement is incorporated, with all-moving stabilators, single vertical stabiliser, rudder, and twin ventral fins. The flight control surfaces are operated by a computerised flight control system (FCS), which also adjusts the slats/flaps for improved manoeuvrability. Up to 3,629 kg (8,001 lb) of ordnance, equipment, and fuel can be mounted under the hardpoints, two of which are on the wing-tips, four are under the wings and one is under the fuselage.

According to the sources, JF-17 block II will cost approximately US$30–35 million per unit.

Pakistan launched production of the JF-17 Block-II at the Pakistan Aeronautical Complex (PAC) in 2013. The Kamra production facility was reconfigured for the production of the new version.  Air Marshal Javaid Ahmed,  chairman of PAC, earlier stated: “We will hand over 16 Block-II JF-17s to the PAF every year”, and that the manufacturing plant has the capacity to produce 25 units in a year.” 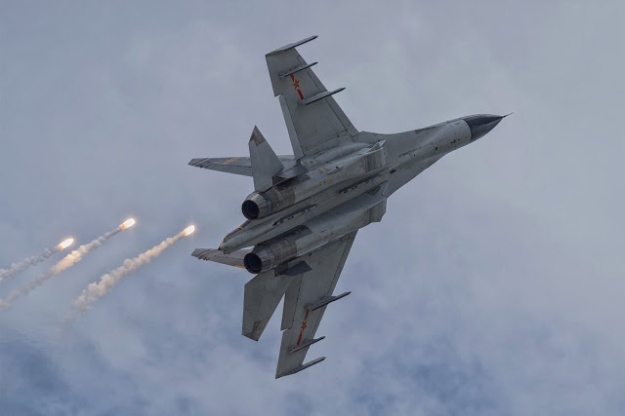 The man-machine interface of JF-17 Thunder is kept very simple and flexible at the same time too. The cockpit consists of three Multi functional displays (MFDs) supported by a smart Heads Up Display (HUD). The symbology and functionality of the controls is kept very much similar to SAAB’s Gripen aircraft – an aircraft evaluated by PAF in the past. Implementation of HOTAS (Hands On Throttle-And-Stick) is visible in the design. The commonalty of the cockpit helps in decreasing time and training costs thus making a speedy fighter conversion to the aircraft. 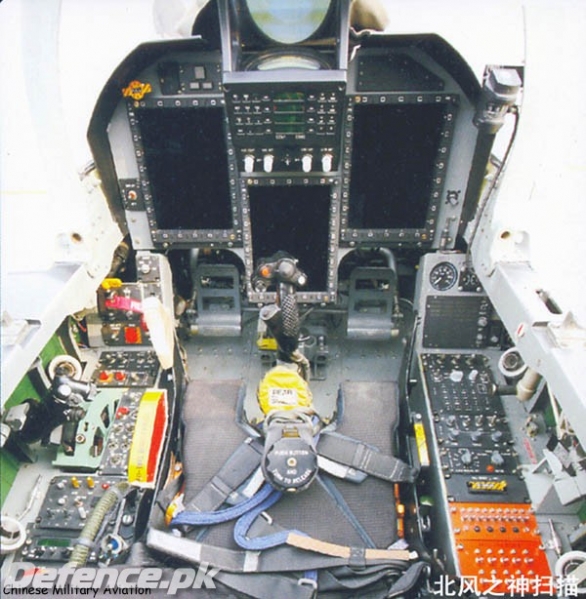 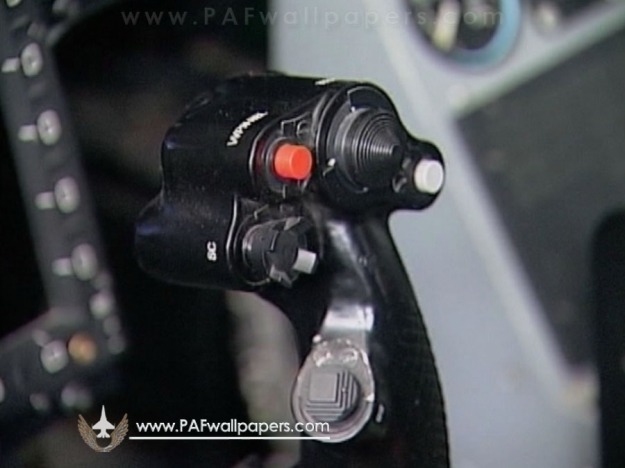 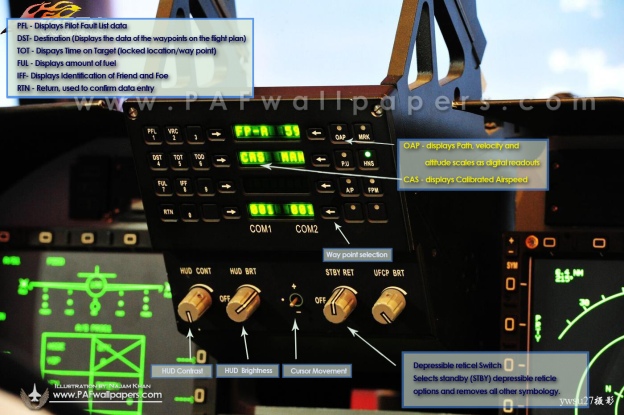 A labeled picture of JF-17’s Integrated Control Panel (ICP), data entry display and Multi Functional Displays (MFD). JF-17’s cockpit has three 6X8 inch wide MFDs. The information displayed on all these MFDs is interchangeable and pilot can easily switch information among them.

A labeled picture of JF-17’s Heads Up Display (HUD). The symbology and functionality of the controls is kept very much similar to SAAB’s Gripen aircraft.

A close up of front instrumentation panel that includes Smart Heads Up Display(S-HUD), cockpit audio recorder and Airborne Video Tape Recorder (AVTR). The elevated design of this panel also helps in decreasing the sun flare from entering the cockpit.

PK-16LE MK16 ejection seat also has an ejection sequencer, which manages the separation time of ejection seat and parachute of the ejectee pilot. The main features of PL-16LE MK16 are the rearward firing headbox, leg restraints and enhanced cushions. Beneath the seat cushions are the pilot’s survival kit which includes a rescue flares, small boat, medicine, food and some other accessories.

Weapons package of the JF-17 on display at Zhuhai Airshow 2014. Of prominence are C-802AK Anti-Ship missile (first picture – above ), GB-600 Stand-Off-Weapon (SOW) and C-102 Anti-Radiation Missile. CM-102 is a Anti-Radar Missile with range of 100km. It has high hit accuracy and a 80kg warhead. PAF has already inducted the Brazillian origin MAR-1 ARM for its JF-17 fleet. 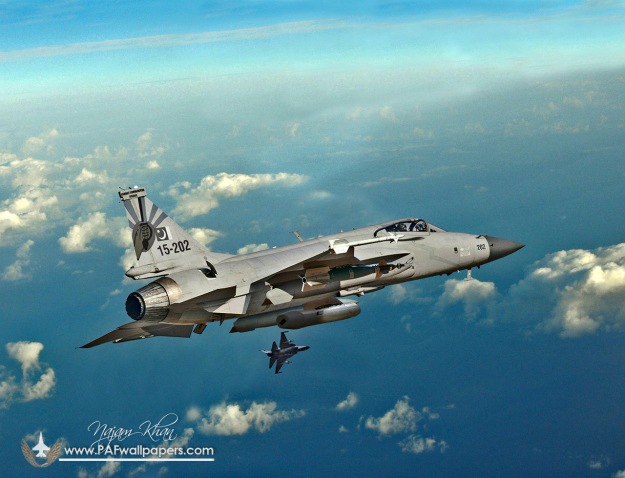 Artistic impression of JF-17 Block-II with in-flight refueling probe. The aircraft is equipped with GBU-12 LGBs and  WMD-7 Pod on centerline station with CCS marking.

Artistic impression of the JF-17 Block-II formation employing 500kg GB-6 SOW. GB-6 is a 500kg bomb guided with GPS/INS system. It can be used for large-scale ground targets such as vital enemy installations.

The maximum range (3,000km) in a High-High-High mission profile is achieved in the following configuration:

The maximum range (1,200km) in a Medium-Low-Low-High mission profile is achieved in the following configuration: 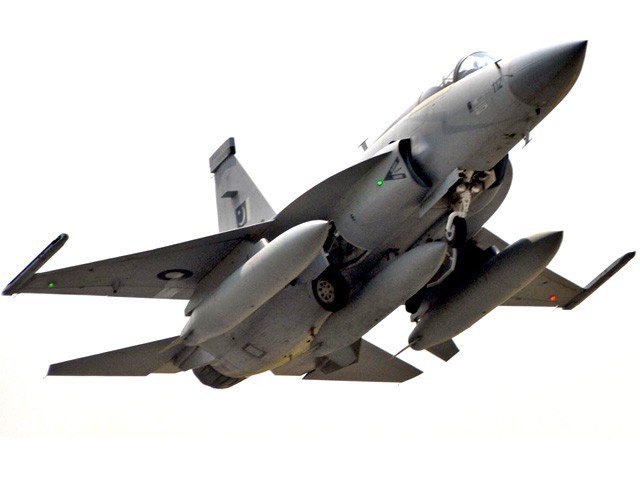 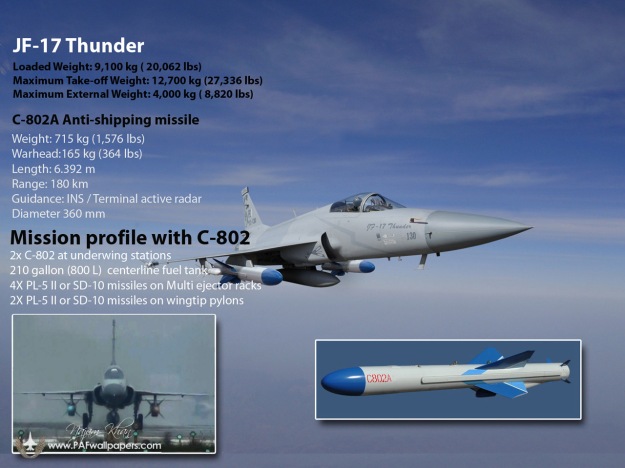 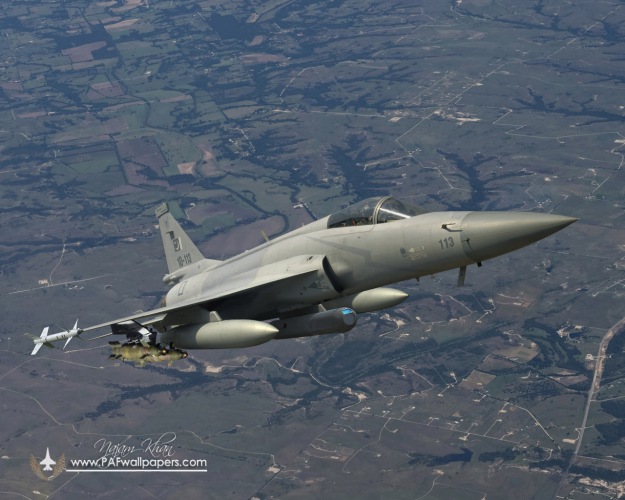 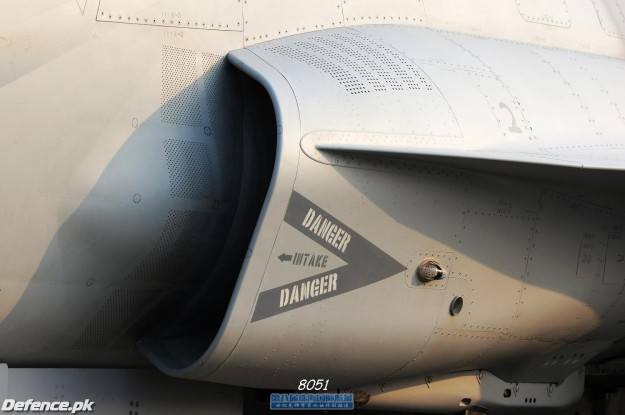 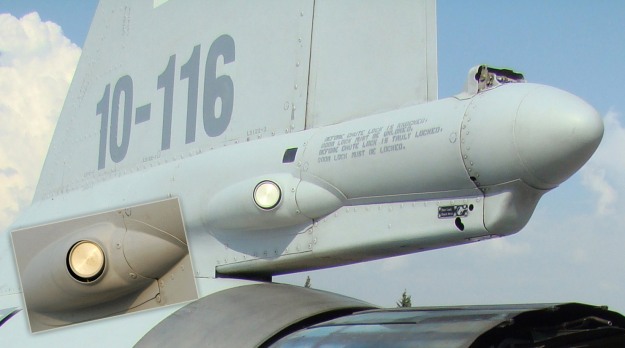 Multi-function pod with a laser designation function to provide a day/night smart weapons guidance capability as well as a full suite of sensors for navigation and airto-
air target identification roles.

JF-17 Thunder has a modified RD-33 engine capable of producing 79-98kN of thrust.

Comparison between WS-13 and RD-33

A Chinese radar KLJ-7  has been selected for the initial batch of JF-17s. 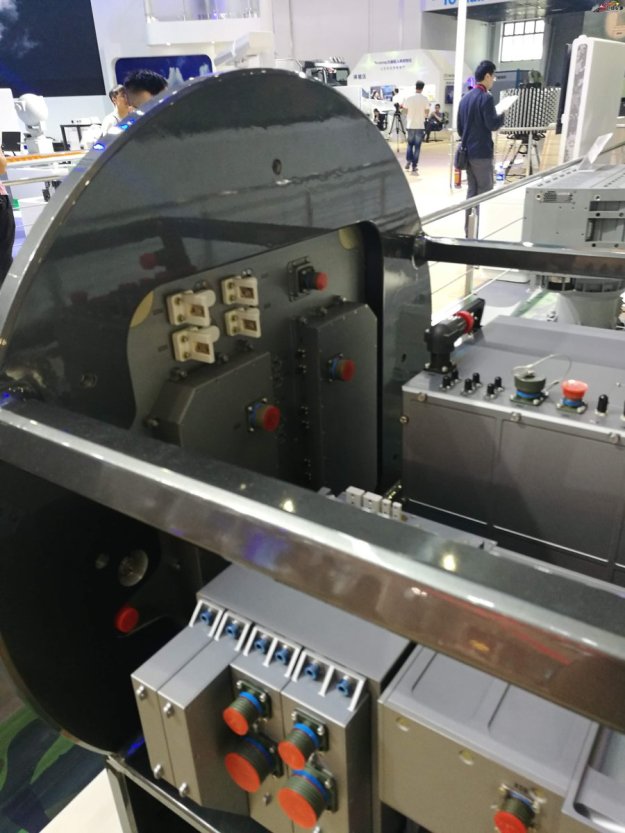 It say KLJ-7A is a AESA specially designed for JF17 with performance equals to radar of F-35. Operational mode including: 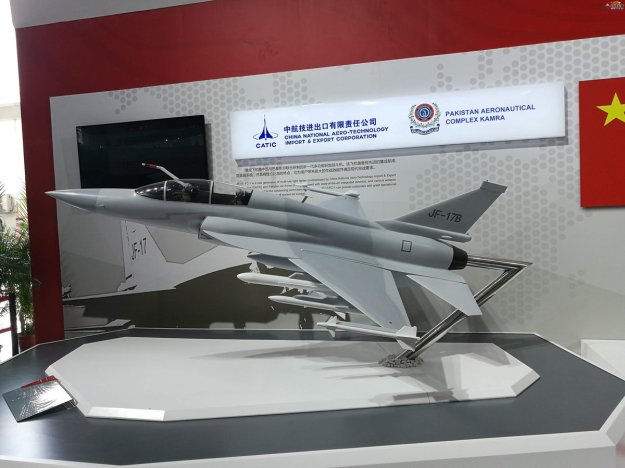 THE JF-17B COULD BE THE FOUNDATION OF THE BLOCK-III: Here

It would be erroneous to argue that the JF-17 is not hampered by its drawbacks, but it would be equally disingenuous to argue that there were feasible and accessible alternatives. The JF-17’s baseline design – i.e. the Super-7 – was frozen at a time when Pakistan was sanctioned by the U.S., which in turn resulted in the non-delivery of 71 Lockheed Martin F-16A/B Block-15s. In the absence of accessible alternatives, the only alternate avenue for the PAF would have been to retire aging A-5s, F-7Ps and Mirage III and 5s without enough replacements, thereby causing a sharp downfall in fleet size.

The JF-17 was to return to the drawing board anyways (to accommodate for emerging technology trends – i.e. Block-III), but the cost of its absence would have been buying costlier imports. Since 18 F-16 Block-52+ cost $1.4 billion U.S., the alternative (in the 2000s and 2010s) would have, at best, been another one or two new F-16 squadrons. The PAF tried to offset the design limitations with relatively good Western subsystems and avionics, most notably from Thales, but this too fell through due to cost as well as Paris’ desire to reinforce its efforts to sell the Dassault Rafale to India.

Ultimately, the PAF proceeded with the JF-17 as-is, and successfully supplanted its A-5s, F-7Ps and Mirages. In addition, the JF-17 emerged as a credible air defence compliment to the F-16s, resulting a doubling of network-enabled and BVRAAM-capable fighters in the PAF (to 150+ fighters). It also increased the number of fighters capable of deploying stand-off range air-to-surface munitions, especially since the F-16s have yet to be equipped with such munitions. In 2015, the PAF confirmed that the JF-17 was cleared for using the C-802 anti-ship missile and Mectron MAR-1 anti-radiation missile (for engaging ground-based radars).[6] In March 2017, the PAF celebrated the successful integration of the Global Industrial & Defence Solutions Range Extension Kit, a precision-guided glide-bomb kit (providing 50-60 km in range) for Mk-8x-series general purpose bombs.

The JF-17 was also accompanied by other important gains. Besides being a fighter the PAF could freely equip and configure, it also enabled Pakistan Aeronautical Complex (PAC) to build a strong local supply channel to support the fighter. This began with merely assembling kits from China, but by 2015, PAC was responsible for manufacturing 58% of the fighter (with AVIC providing the remaining 42% under the original workshare agreement).[7]

The local channel also enables the PAF to support the JF-17 using domestic currency and labour costs, enabling the fighter’s operational costs to be more affordable than imports. PAC is also serving a vital role in being the supplier of the JF-17’s electronics, which it is manufacturing under co-production or licensing agreements. Not only are Chinese systems being produced under license, but several Western subsystems are also being built at PAC (under co-production deals).

While the PAF opted to induct the JF-17 Block-I and Block-II, it was fully cognizant of the capabilities found on and expected of contemporary high-technology fighters. For the JF-17, the PAF may have pushed the bulk of those requirements to the forthcoming JF-17 Block-III. Granted, the slated subsystems – such as the active electronically-scanned array (AESA) radar and HMD/S – would be significant upgrades, but the JF-17B seems to suggest that the Block-III will be more than just tacking new equipment to an existing design. The design itself may see several key alterations.

If this is a representation of greater composite materials usage, then this could be indicative of further weight reduction. It will be interesting to see if relaxed stability and lower wing loading were also incorporated into the design, especially with the presence of a digital fly-by-wire system. This would help improve the JF-17’s maneuverability.

The tail/engine exhaust area has also been altered, though it is unlikely that this is indicative of an engine switch at this time. The PAF did express interest in a new turbofan engine – the RD-33MK and WS-13. Either one of these engines would improve the JF-17’s fuel efficiency, maintenance costs, and thrust-to-weight ratio (TWR). As per Alan Warnes (via Aviation Week – subscription required), an engine switch will likely happen, though it is not known if this is slotted for the JF-17 Block-III or for later builds.