The Z-10 attack helicopter can be primarily deployed in anti-armour and battlefield interdiction missions. The helicopter can also conduct limited air-to-air combat operations.

The Changhe Aircraft WZ-10 attack helicopter is based on a Russian design commissioned by the Chinese, Kamov’s chief design engineer says.

In 1995, Kamov developed a preliminary design in the 6t weight class under a contract with the Chinese government, says Sergey Mikheev, Kamov’s chief design engineer, speaking at the Heli-Expo trade show in Las Vegas, Nevada. 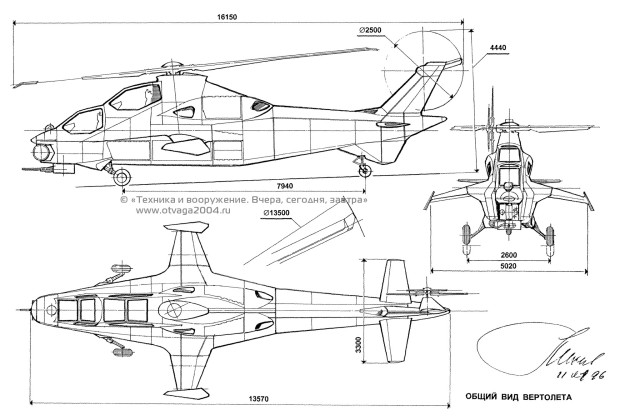 The same drawing of the “project 941” signed by Mikheev

“Due to understandable reasons, this information was kept secret,” he says.

The Project 941 design was not based on any Soviet-era attack helicopter project and was strictly designed for China’s unique requirements, Mikheev says. “They gave us the desired weight, we discussed preliminary performance parameters, then we signed a contract and we fulfilled the contract,” he says.

“So I wish success to the helicopter,” Mikheev says.

Mikheev would not comment on the WZ-10’s performance. “That is a question for the Chinese,” he says. “I know what I have done.” Source flightglobal.com

The development of the Z-10 attack helicopter started in the mid-1990s at CHRDI’s and CAIG’s sites in Jingdezhen, China. It is the first modern attack helicopter designed and produced domestically by the People’s Republic of China.

The full-scale test platform was completed by the end of 2001. The initial flight tests were completed in 2003 and the second stage of tests were concluded by 2004. The Z-10 can be compared with its Western counterparts, including AH-1 Cobra, AH-64 Apache and Tiger helicopters.

Development of a dedicated attack helicopter began in the mid-1990s at the 602 Institute and Changhe Aircraft Industry Company (CHAIC) in Jingdezhen, Jiangxi Province. According to another report, the PLA originally selected the the MI-35 but chose the Franco-German Tiger as the source of emulation. Around 1991-92 the PLA leased a single Pakistani AH-1 for technical evaluation. The WZ-10 attack helicopter suffered several delays due to engine related troubles, and finally flew for the first time on 29 April 2003.

Initially the WZ-10 prototypes were powered by Canadian PT6C-76C engines but the production version are likely to use the WZ-9 engines. At one time the WZ-10 was believed to have two European MTR 390 turboshafts, though this now appears in error. Initially there was speculation that the design used the power plant and transmission derived from the Harbin Z-9, with the fuselage modified to accommodate two pilots. However, over time efforts were made to depict the WZ-10 was the military component of the Chinese Medium Helicopter [CMH], and possibly sharing a common power train with the Z-15 [AC352]. Source globalsecurity.org

In June 2012, United Technologies and its subsidiaries Pratt & Whitney Canada and Hamilton Sundstrand pleaded guilty for breaching the Arms Export Control Act and making false assertions about the illegal export of US-made military software for the Z-10. The companies agreed to pay more than $75m to the US Government as part of a global settlement related to the Chinese arms export violations.

In contrast to Russian system that uses two antennas, the Chinese MMW FCR adopts western approach of using a single antenna, similar to AN/APG-78 used for AH-64D Apache Longbow. The radar is designated as YH, short for Yu Huo (浴火), meaning bathing in fire. YH MMW FCR is fully integrated with other subsystems of the onboard electronic warfare system, such as radar warning receivers (RWR), laser warning receivers (LWR), electronic support measures (ESM), and electronic countermeasures (ECM), with the entire EW system on board Z-10 named after the radar. Source: errymath.wordpress.com

Features of the Chinese military aircraft

The Z-10 incorporates a conventional attack helicopter layout featuring a nail down fuselage and stepped tandem cockpits. The fuselage, with a sloped side, is tapered to the rear for a reduced radar cross section.

The helicopter is equipped with five-bladed main rotor and four-bladed tail rotor. Two engines are mounted at the rear of the cockpit. The helicopter has a length of 14.1m, rotor diameter of 13m and a height of 3.8m. The maximum take-off weight of the Z-10 is 8t.

CAIC has also installed domestically produced radar warning receivers and infrared missile approach warning receivers on the wing edges and the fuselage, as well as applique armor plates attached to the cockpit exterior to enhance the survivability of the aircraft and crew. 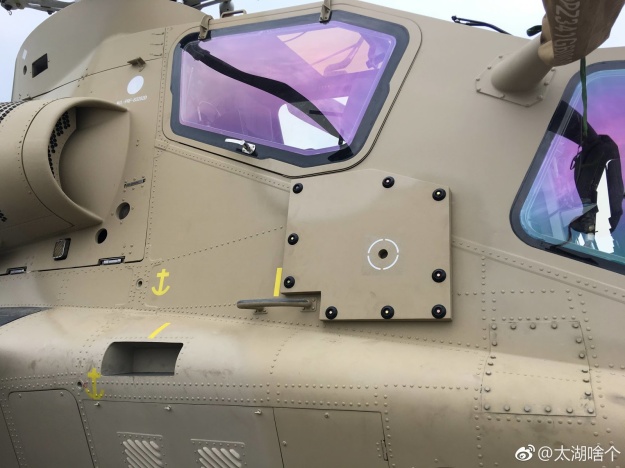 The Chinese Z-10 attack helicopter is now equipped with extra armor involving graphene, a material that is strong and light, a Chinese military expert said on Wednesday after the State broadcaster featured the helicopter.

Video released by China Central Television last week showed the Z-10 landing in an airfield. Extra armor modules could be seen on the side of the helicopter near the cockpit.

Chinese helicopters, including the Z-10, did not have extra armor because their engines could only lift a certain weight, Wei Dongxu, a Beijing-based military analyst, told the Global Times on Wednesday, noting that the choice was made so that the Z-10 could carry a sufficient payload.

The extra armor shown in the broadcast is likely made of graphene, which is strong and light, and would solve the weight problem, Wei said.

Chinese researchers at the Beijing Institute of Aeronautical Materials developed graphene materials that can be used for making armor and bullet vests, chinanews.com reported in 2016.

It said that graphene is about 200 times stronger than steel, can stretch an extra 20 percent, and weighs only 0.77 gram a cubic meter. Source globaltimes.cn

Other visible modifications include the external ammunition belt for the chin-mounted cannon, while sources claimed that the caliber was changed from 23 mm to 20 mm to better meet commonality with international users and NATO ammunition standards.

Notable munitions and payloads included the CM-501XA loitering munition and the SW6 air-launched drone, as well as the ET60 324-mm lightweight torpedo. Engine refitted with sand/dust separation filters for its improved WZ-9 turboshaft engines, which are believed to provide 30 percent more power, at around 1,200 kW. The engine exhausts are modified from the standard Z-10 sideward-facing exhausts to upward-facing exhausts, which decreases its infrared signature. Source ainonline.com 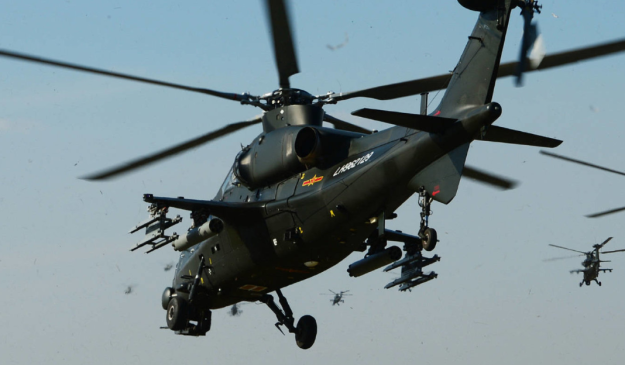 Cockpit and avionics onboard

The stepped tandem cockpit accommodates a gunner in the front and pilot in the rear on ejection seats. The cockpit is protected by composite armour. The bullet-proof glass canopy of the cockpit can withstand 7.62mm rounds.

The helicopter can be fitted with a forward-looking infrared (FLIR) and a low-light television as well as radar systems.

Armaments on the modern attack helicopter

The chin mounted turret can be fitted with a 20mm or 30mm autocannon. Two stub wings provide four hardpoints for holding external weapons. The GJV289A standard databus architecture allows the integration of weapon systems of both Soviet and Western origin.

The helicopter can also adapt to use the newly developed HJ-10 anti-tank guided missile (ATGM). The missile is believed to be equivalent to the US-made AGM-114 Hellfire.

The Hong Jian-10 or HJ-10 is an anti-tank missile family developed for the People’s Liberation Army (PLA) Z-10 attack helicopter. The missile is intended to defeat the latest armored targets such as main battle tanks (MBTs) using a variety of warheads and guidance systems at ranges of 10 kilometers. The guidance systems for the HJ-10 missile include semi-active laser (SAL), Imaging infrared (IIR) seeker, TV seeker and millimeter wave (MMW). Its development started in the late 1990s and entered service in significant numbers by mid 2010s. The HJ-10 has been designated as the basis for the development of a new array of missiles intended for Unmanned Air Vehicles (UAVs) and other small sized platforms. Source deagel.com

The TianYan-90 (TY-90) is an air-to-air missile (AAM) developed on the basis of the QW-2 shoulder launched surface-to-air missile (SAM) to be fired from rotary-wing aircraft. The missile’s infrared seeker is specially designed to operate near the ground with intense clutter to engage other rotary-wing aircraft and fixed-wing airplanes flying at low altitude. A surface-to-air variant was also developed on the basis of the TY-90. The People’s Liberation Army (PLA) Army Aviation Corps is the primary user of the TY-90 missile on its Mi-171 and Z-9W (WZ-9?) attack helicopters. The Z-10 and Z-19 attack and scout helicopters are another candidate platform for this air-to-air missile. The TY-90 missile can engage helicopters at ranges of 500 meters to 6 kilometers and is equipped with a laser fuze and a 3 kg High Explosive (HE) warhead capable of piercing the light armor of Western attack helicopters such as AH-64 Apache. This missile is powered by a solid propellant rocket motor. It entered service with the PLA Aviation Corps around 2002.

The PL-5 (霹雳-5) air-to-air missile (PL stands for Pi Li, “Thunderbolt” in Chinese, the generic designation for all PRC air-to-air missiles) is a short-range, Infrared homing missile use by Chinese fighters. It is based on AA-2 Atoll technology and resembles the AIM-9 Sidewinder.  The PL-5 have been continuously upgraded by Luoyang and the latest variant, the PL-5EII added a dual band, multi-element detector as well as a laser proximity fuse similar to the PL-9. According to Chinese export/import agency CATIC, the PL5E has an all-aspect capability with the seeker having a maximum off boresight angle of ±25° before launch, and ±40° after launch.

The PL-9 was introduced during the 1990s, and is a separate evolution of the PL-5 series, with capabilities similar to the AIM-9L/M (image © 2009, Zhenguan Studio). Source ausairpower.net

The PiLi-9 (PL-9) is a short-range air-to-air missile (AAM) developed in China for the export market based upon the PL-5, PL-7 and Python 3 missile technologies. The PL-9 utilizes a derivative of the Python 3’s infrared seeker. The PL-9 missile program was launched in the mid-1980s and first deliveries occurred in 1989. The PL-9C is an improved variant introduced in the 1990s featuring extended range from 5 kilometers to 22 kilometers and increased launch weight (115 kg vs. 123 kg), warhead (10 kg vs. 12 kg) and G maneuvering factor (35g vs. 40g). The PL-9D is a surface-to-air missile variant also introduced in the 1990s. The PL-9D missile system has been ordered by the People’s Liberation Army (PLA) ground forces. The PL-9 air-to-air missile did not receive export orders or they were not reported. Maybe Iran ordered the missile for their Chinese F-7 fighters. The PL-9C missile was ordered by Bangladesh in 2006 and 2008 for use on the F-7BG fighters. Source deagel.com

The following is based on a translation of a report on a Chinese news site:

A report in mil.huanqiu.com says that at the upcoming Tianjin Helicopter Exposition, China will showcase its new Wozhou-16 turboshaft engine and the model of a 5000kw turboshaft it is developing.

China’s WZ-10 armed helicopter is regarded as better than the U.S. AH-64 Apache, but lacked a powerful engine so that it could not operate fully to its designed capacities.

When it was designed, China planned to use a powerful Canadian engine but the United States told Canada not to sell such an engine to China.

As a result, China had to use the Wozhou-9 engine, which has less power, in the WZ-10 and gave up some of the auxiliary equipment that it was designed to carry to reduce its weight.

The report says that the new Wozhou-16 engine has a takeoff power of 1,240 kw and maximum continuous power of 1,100 kw, much better than the Wozhou-9.

Moreover, there is potential to raise its power by 15% through further improvement.

The engine is now undergoing certification procedures and is expected to be put into mass production in 18 months.

By that time, it will be used in the WZ-10 and China’s AC313 13-ton class large helicopter with three engines.

The report continues that, in addition, China will showcase the new model of its new 5000kw turboshaft engine.

According to Wu Ximing, chief helicopter designer of AVIC (Aviation Industry Corporation of China) Helicopter Company, the new engine will be used to develop a tiltrotor aircraft similar to the US V-22 Osprey, with the code name “Lanjing (Blue Whale)” with a takeoff weight of 40 tons and internal load of 20 tons. Source chinadailymail.com 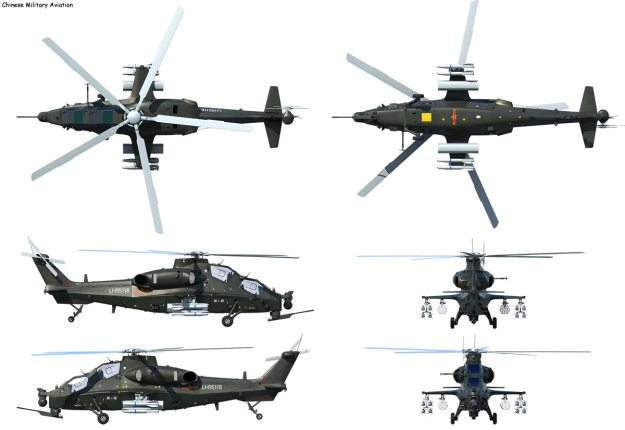